The latest news in the world of video games at Attack of the Fanboy
February 6th, 2017 by Joshua Evans 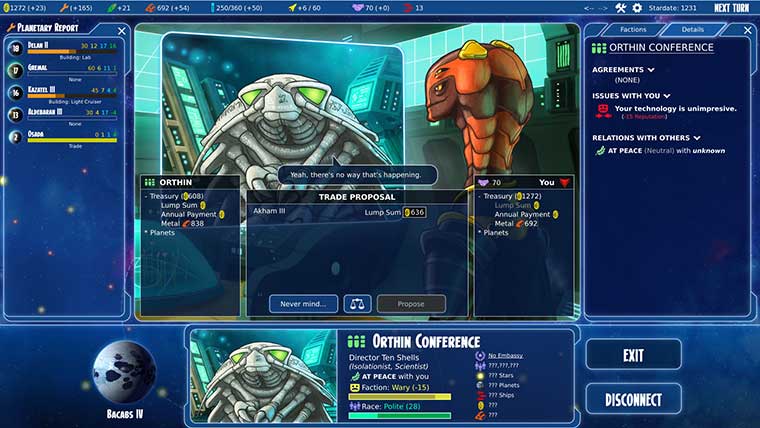 Stars in Shadow is 4x game in the style of Master of Orion and other such classics, but with it’s own style that allows Stars in Shadow to stand out from the other games in the genre. While far from perfect, the game accomplishes most of what it set out to do, and for the most part, does it well. Did I mention it is made by two people, specifically just a programmer and a artist?

But why play as humans when you can play as a race of yeti spiders that live in ice caves?

Stars in Shadow is just full of charm and character. Every race has their own unique greetings, and advisers making them feel even more different to each other. The latter being something even larger budget titles ten to skip out on from time to time (looking at you Total War). Factions also have their own style of units, with one exception being the two Ashdar factions which are the same race but in some sort of civil war. Tool tips and help from your advisers, is usually humourous, especially the snake people, whose adviser has the fancy name of Baron Velik the Cunning. Because of the differences between races advisers, I never found myself turning off the advice after a couple of play throughs just to see the different lines. Even the diplomatic responses for meeting with the different factions just ooze character. Tool tips and other such descriptive text are also well written and interesting, some even amusing at times. There are plenty of little details as well, such as different discovered species either being named themselves or named by your scouts depending on their intelligence or whether or not your faction can be bothered to care about them.

Speaking of tool tips, the game’s UI is phenomenal, and you will rarely find yourself confused as to what is going on. Even if you are uncertain as to the status of anything, a quick glace should reorientate you. Somehow despite being useful, it manages to not take up too much of the screen. Most of the information you will need is presented neatly at the very top of the screen, with additional options taking up the left and right sides of the UI. It is refreshing to see a 4x game with a sensible UI as most of them tend to take players forever to figure out where everything is.

Game play is the usual run of empire building games. Planets can construct buildings and units, or be used to boost the production of more economic things. Food can be moved between planets via trade ships, and doing so is heavily recommended. Especially as certain planets grow food at different rates with an ice planet obviously being less suitable for farming than a garden planet. Planets can even have random shticks, including ancient ruins, intelligent life, or greater mineral deposits. The larger the galaxy, the more of these shticks you will see during one play through. So with planets being unique, sometimes another faction may take over an area with something fancy you want. Clearly the only reasonable thing to do is amass a fleet that would make Admiral d’Orvilliers jealous, and conquer the planet for yourself. If the planet is undefended, you can just bombard the thing from the safety of your space ships to either soften it up for the ground troops to take over, or whip the enemy completely from it. However if the enemy is actually defending it then you can fight the battle yourself with a simple but fun, turn based combat system, or have the computer automatically do it for you if there is no chance of your opponent winning. But more important than all of this, you can set it in the options menu to auto save every turn. 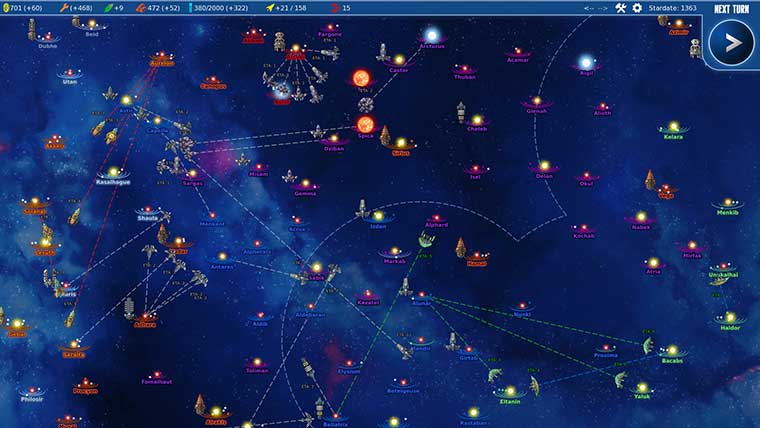 The Factions of Stars in Shadow do not have drastically different play styles, but have two special abilities that changes them up just enough to make them unique. For instance the Ashdar Imperials can construct portals between their planets, encouraging a much more mobile approach and the grouping of larger fleets. Aesthetically, everything about the races fit their backstory, including the ships. If a factions lore says they prefer rugged equipment, then their fleets will certainly look the part. Humanity plays the most differently as they start without a home planet (what happened is up for the player to find out) and roam the galaxy as a band of nomadic refugee pirates that all other races hate. So Humanity is not recommended for first time players. But why play as humans when you can play as a race of yeti spiders that live in ice caves?

Not all is amazing for Stars in Shadow though, as the game has some niggles that make it frustrating. First and foremost being that diplomacy is over powered. Which is honestly the first time I have ever said that in my life. Diplomacy works via you spending “influence” points on certain actions that you want to take, with influence growing every turn, even more so if you have diplomatic arrangements made. So the AI will accept every action you suggest as long as you have the influence. Meaning if you go a long period of time without meeting another race, which is entirely possible if you make the map large, then you can almost instantly ally with a faction the moment you meet them. You can even win by allying with everyone. Another victory involves getting most of the factions to vote for you as “Galactic Leader”, an easy feat since the AI will generally vote for you if you have enough diplomatic options set up, including grade agreements. Playing as humanity negates this some what as you are constantly traversing the galaxy, increasing the likelihood of you meeting another faction early on before you get a substantial amount of influence. 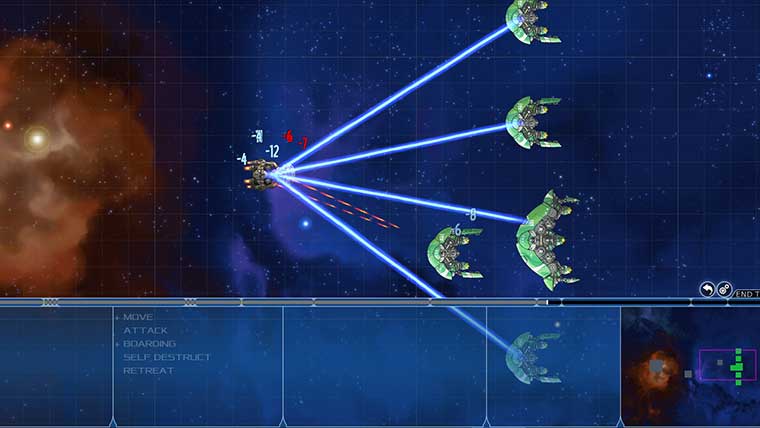 A few issues are more minor, such as if you end your turn when you do not have enough money to pay the upkeep on your ships, the game will simply scrap the ships without warning you. This is doubly bizarre as the game generally warns you before you end your turn of any issues left unattended. Another is that auto resolving on higher difficulties will usually result in your crushing defeat regardless of numbers or ship superiority. Stars in Shadow also lacks a multiplayer, which while disappointing, is not worth counting against the game.

Stars in Shadow succeeds at everything it aims for. The game’s art style is absolutely amazing, game play is fun, and factions are interesting. It is not perfect but you will still enjoy yourself playing it. Stars in Shadow is a good introduction to the 4x genre with it’s simple but in depth systems, whilst still being interesting enough to justify getting it over other larger 4x games. The only thing holding the game back is it’s diplomacy system. However if you can forgive that bit, you will find a proper empire building game. Just with yeti spiders.