Classic Mario with too much twist 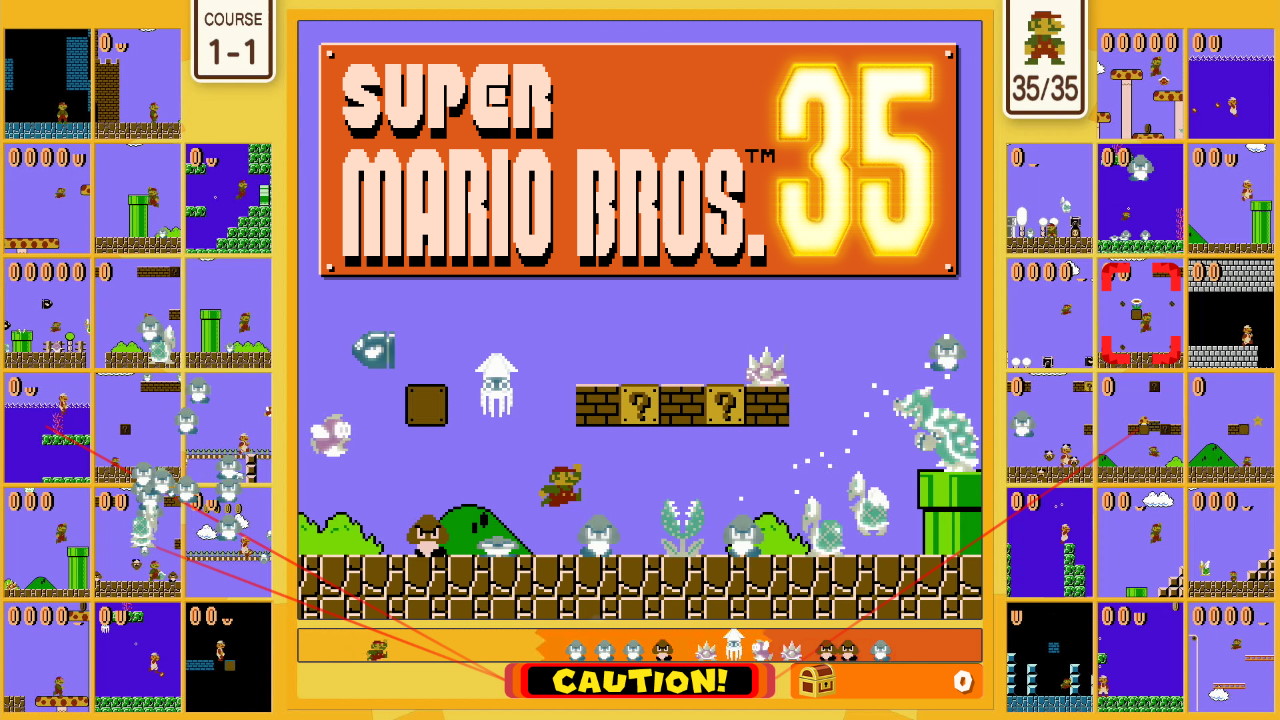 Few games are as iconic as the original Super Mario Bros. for NES. The gaming industry simply would not look the same if Miyamoto’s masterpiece hadn’t arrived at exactly the right time and restarted the entire medium. It’s timeless design has kept it in the popular consciousness as well, with re-releases and remixes being released multiple times over the last 35 years. But few of them have been as unique and literally game-changing as Super Mario Bros. 35 which pits 35 Mario players against each other in a battle royale style fight to survive. But have those changes gone too far? Has the magic of the original game been lost? And if so, has something better been found in its place?

The answers to those questions will largely depend on what you want out of Super Mario Bros. 35. The game is free for anyone with a Nintendo Switch Online membership, so it can easily be passed off as a fun, little freebie to go along with your membership. And as that, it works exceptionally well. It is fun, it hits all the right nostalgia points for Nintendo fans, and yet it still mixes the formula up in interesting ways that will constantly surprise players. 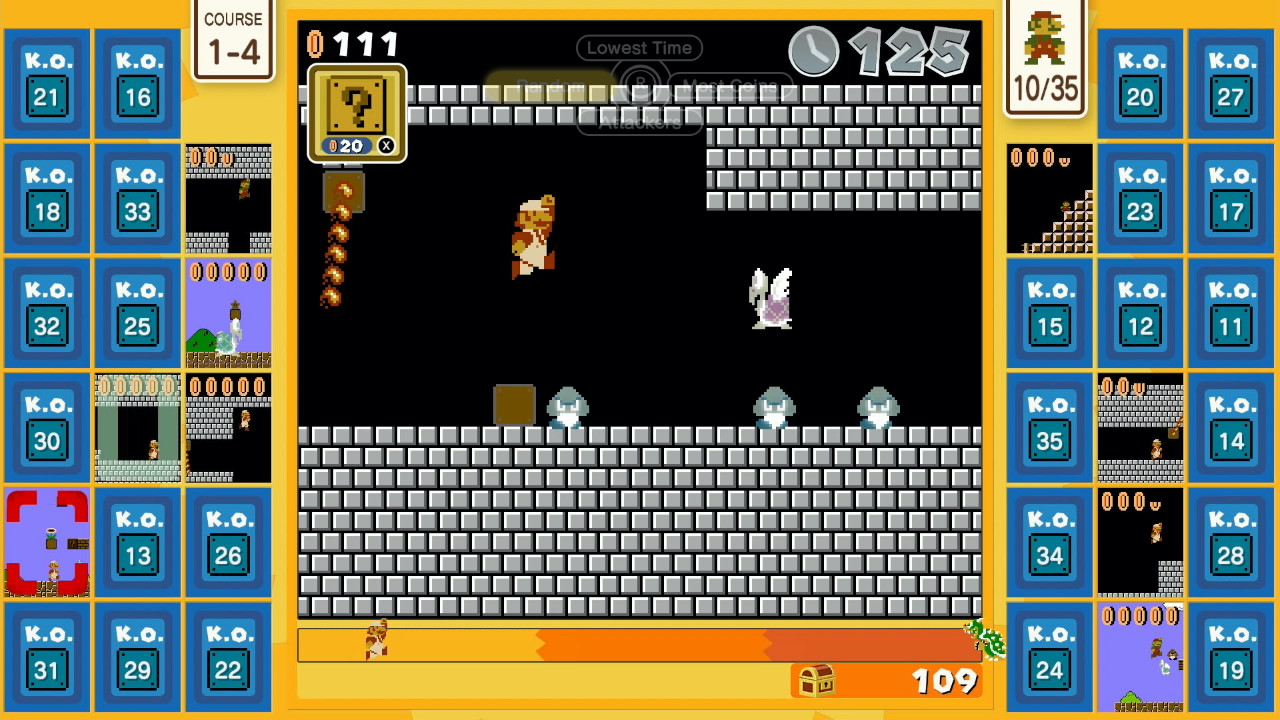 However, one of the earliest surprises you’ll experience is just how different you have to play this game if you want to win. When it was first announced many players quickly assumed that Super Mario Bros. 35 was a race to the finish sort of thing. Players could rush through stages, riskingi certain death to gain precious seconds on their opponents. This would have fit perfectly with how most people play the main Super Mario Bros. platforming games. That’s not how Super Mario Bros. 35 works though.

Instead while you are working against the clock your main goal is simply to survive. Everyone has just the single life and everyone is battling to be the last Mario standing. What makes this weird is just how different this feels to playing a regular Mario game. Typically you want to avoid death but are propelled forward by the ticking clock and the fact that there’s nothing to be gained by moving slow or standing still. In Super Mario Bros. 35 there is much to be gained and players need to adjust quickly if they want to secure any victories.

So the goal of Super Mario Bros. 35 is to move slow, target others, and kill as many enemies as you can

Instead of rushing across platforming stages at breakneck pace, dodging enemies and leaping over giant gaps players will find themselves getting a fire flower or other power up and then sort of milking it for as long as they can. You see, you aren’t just playing by yourself to see who can last the longest, you can also send enemies over to other players by targeting them using the same mechanics as Tetris 99 and then killing goombas, koopa troopas or other foes on your screen. They can do the same, so often you’ll find yourself with a wall of enemies to work through. But with a star or fire flower this is simple and easy, and it even adds time to that ever-present ticking clock.

So the goal of Super Mario Bros. 35 is to move slow, target others, and kill as many enemies as you can all while remaining as safe as possible. With that in mind the game works well and delivers lots of fun of its own, but it’s pretty far from what most people want and expect from a Mario platformer. So expectations need to be put in check right away, which can be disappointing to some. Once set properly Super Mario Bros. 35 gives you a pretty unique battle royale experience to play through, but it’s also one of the easier and more grind-heavy ones once you crack its formula. 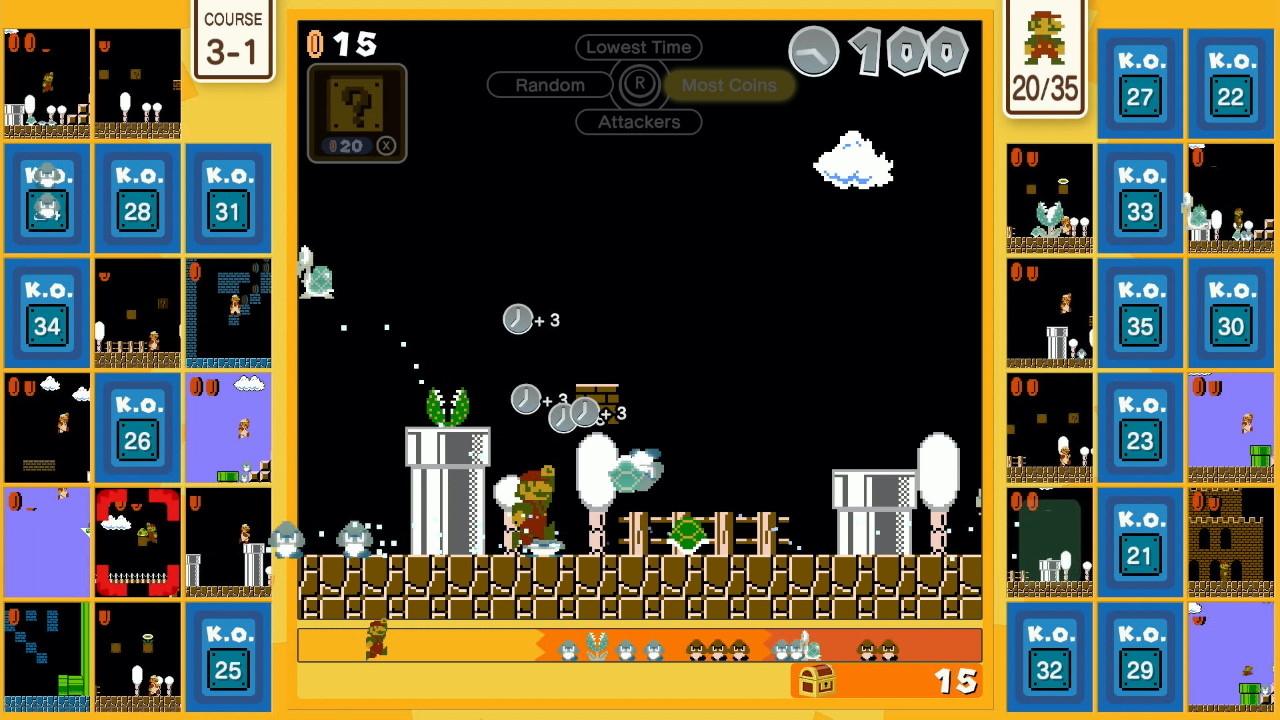 Having powerups is so important to how Super Mario Bros. 35 functions that you’ll spend most of your time hunting them or the coins you can use to purchase a random one as you play. There’s also a sort of feedback loop that forms where players are sending enemies to their opponents, which they then quickly kill and often send back or to other players. This also refills their clock, so many times you feel like you are architecting your own demise, giving opponents the time they need to stay in the game. The result is that the few skilled players that make it to the final rounds often end up having to grind it out until the conclusion, which is often just an accidental slip into a bottomless pit. Some things speed this up, such as less time being added to the clock after a certain point, but this only does so much, resulting in minutes of back-and-forth play where you’re just running through the same stages over and over again.

And the stage selection mechanics are simply abysmal. Players only unlock stages by playing them in the game, but everyone started out with the same ones and the pool of levels is picked from among those offered up by the players themselves. Only through some random chance and the few players to have unlocked later levels will you encounter them, making it a wise move to wait and see if the situation improves among the overall playerbase. Of course, with another ticking clock supposedly counting down to when Nintendo snaps this game out of existence it feels wrong to waste so much time replaying World 1-1 and 1-2 when there’s plenty of cooler and more fun levels later on that almost no one has unlocked.

So Super Mario Bros. 35 is a flawed game in some ways while offering something new and unique and a whole lot of fun in others. The initial moments with the game will be rough for everyone as they come in with expectations that likely don’t match the actual experience. Once you understand what the game is trying to do it clicks into place, but only so much and only if the experience of grinding out a victory by shooting fire at dozens of goombas and koopa troopas sounds like something you would enjoy. If you have an NSO membership it’s definitely worth the download and some plays to see if it works for you. If it actually gets removed or you’re not a member then you aren’t missing a lot here other than a new way to play some classic Mario.