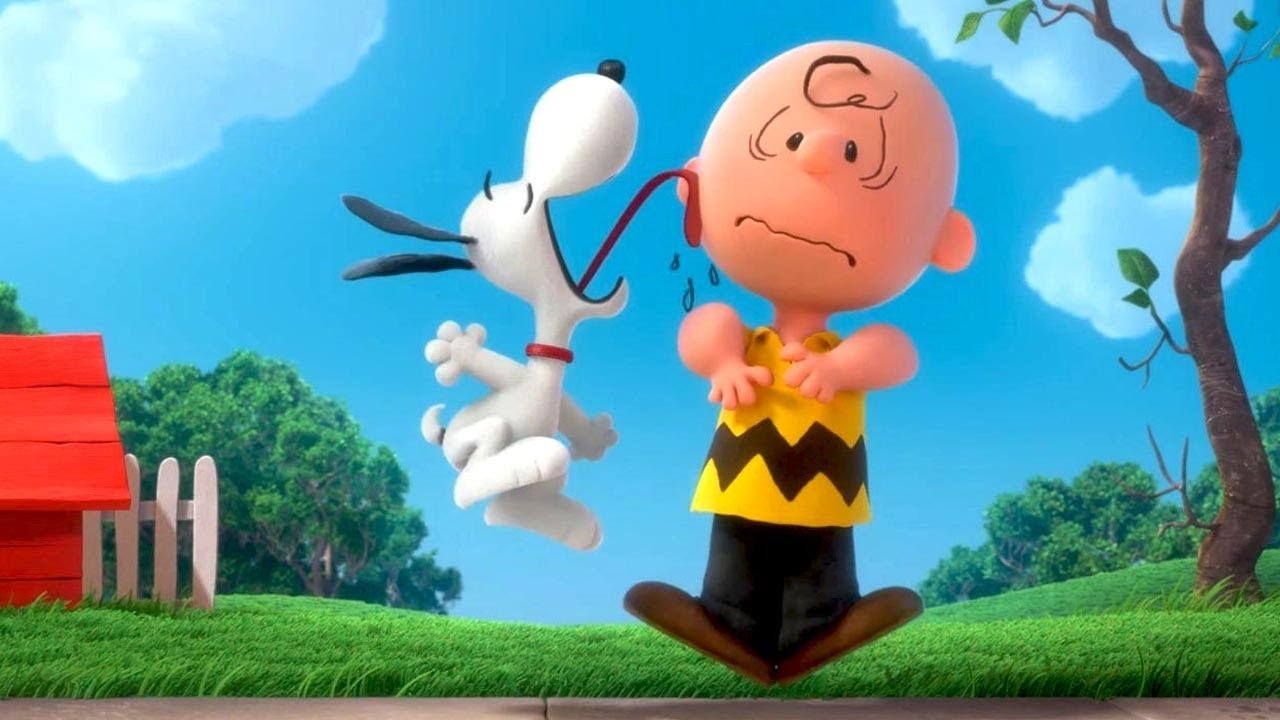 Charles Schulz first debuted his Peanuts comic strips way back in 1950 before spawning a number of television specials, movies, and of course video games. With a brand new Peanuts movie releasing this year, it was the perfect time to also release a new game on the property, which Activision did with The Peanuts Movie: Snoopy’s Grand Adventure.

Taking on the name of the movie as part of the title, this game really doesn’t have anything to do with the movie’s storyline at all. Instead, it takes the unique visual aesthetics of the film and builds a completely separate experience from there. This art style works very well in the realm of gaming, offering a very bright and colorful experience.

The Peanuts Movie: Snoopy’s Grand Adventure features a rather simplistic story where a number of the kids have gone missing and Snoopy must venture to a few different locations to find them. Due to this, the patented Peanuts humor and charm is kind of pushed to the wayside as character interactions are mostly limited to the end of each world upon the saving of each character. 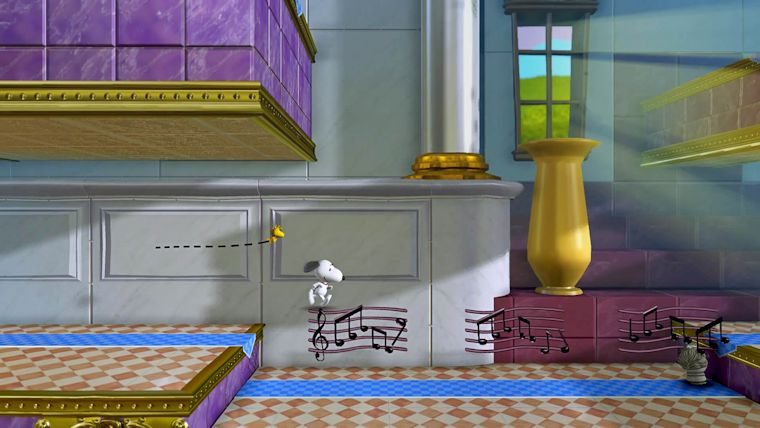 Snoopy ventures to six different worlds, including the Peppermint Jungle, Parisian Underground, and Skies of Paris. Each one of these locales is distinct in design, though a little generic at times. Skies of Paris is the most different of the bunch, with Snoopy taking on his Flying Ace alter ego as he soars through the air on his flying dog house. Sadly, this world only got three stages and a boss fight, while the rest of them got four full stages and a boss fight.

The levels found in each world are sometimes tailored to which character you are aiming to save, such as Melody Chateau’s music themed setup for Schroeder. This is something that may not mean much to the younger kids, but older Peanuts fans can certainly appreciate it. The use of some classic Peanuts music in areas also helps with the enjoyment factor for the older audience as well.

The gameplay found in The Peanuts Movie: Snoopy’s Grand Adventure is a pleasant surprise, as it feels almost like something out of the 16-bit era. Within each stage, Snoopy must traverse a variety of 2D environments with well designed platforming elements. It’s certainly not anything groundbreaking in the genre, but is still a lot of fun.

Similar in style to Mario, Snoopy actually has no attacks other than to jump on enemies, which temporarily stuns them rather than killing them. This feels a little strange at first for those that expect to have some sort of weapon to take down enemies, but the hit detection works well enough that the jump attack is fine. 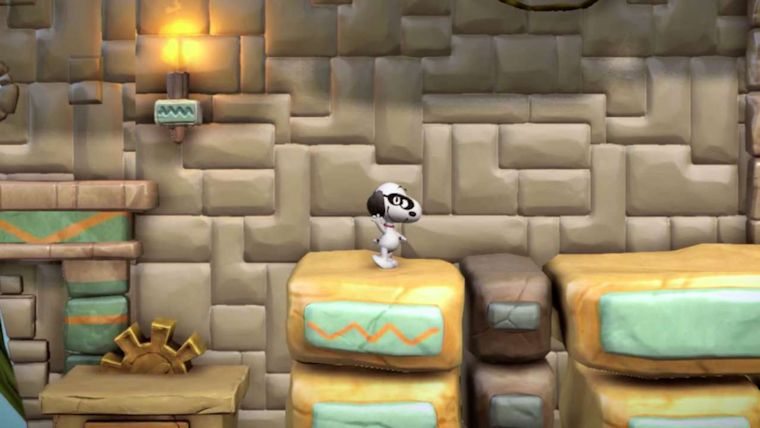 Also following a familiar route, Snoopy can get a variety of suit upgrades that each gives you one power up. Without any of these suits, Snoopy can hover for periods of time, but that ability is swapped out for others in these alternate suits. Unlocked through keys found in the game, you will obtain abilities like gravity free jumping with the Astronaut Costume and the ability to break through specific barriers with the Masked Marvel Costume.

The various costumes can be fun to use, but their usage is so few and far between for most of them to where they don’t feel all that useful. This game would have been better off if the costumes were better integrated within each stage, as typically a costume was unlocked and used for the last stage of one of the worlds and then sparingly after that.

The aforementioned boss fights are an interesting mix, as probably half of them shouldn’t even be considered fights, but rather confrontations. A few of them have Snoopy being chased as the screen scrolls rapidly towards the right or up, with you rescuing one of the children if you survive the level. In fact, one is very reminiscent of the toxic waste climbing stage from Donkey Kong Country 2: Diddy’s Kong Quest, which works very well when utilized in this game.

While the gameplay can be a lot of fun in Snoopy’s Grand Adventure, the game’s biggest problem is easily its length. While there are just under 30 stages to play, it is one of the shortest games to come out at near full price in awhile. The game can easily be completed in two and a half to three hours, with that even including a little bit of exploring in the stages to pick up the collectible jellybeans found in each. There is very little replayability there either, as it didn’t take much work to collect all but one of the game’s achievements. 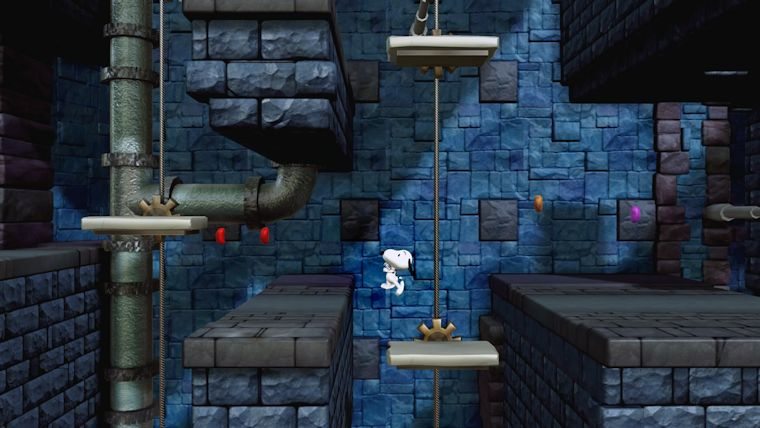 The length also isn’t helped at all by the difficulty level of the game. In fact, it is one of the easiest in recent memory, as you have to try really hard to even die in this one. The game utilizes a heart system, but anytime you get hit and lose a heart, that heart will start to float above you, allowing you plenty of time to grab it to refill your heart meter. Adding onto the fact that there are close to no death traps, with solid ground or water almost always below you, this game can be run through very quickly.

Movie tie-in games are rarely all that good for a variety of different reasons, and the latest attempt with the release of The Peanuts Movie is certainly a mixed bag. The gameplay and levels themselves can be fun and enjoyable, especially for a young audience. However, the lack of any difficulty and the incredibly short length make The Peanuts Movie: Snoopy’s Grand Adventure a game that feels like it should have been a downloadable budget title rather than a near full priced release.