The latest news in the world of video games at Attack of the Fanboy
May 15th, 2017 by William Schwartz 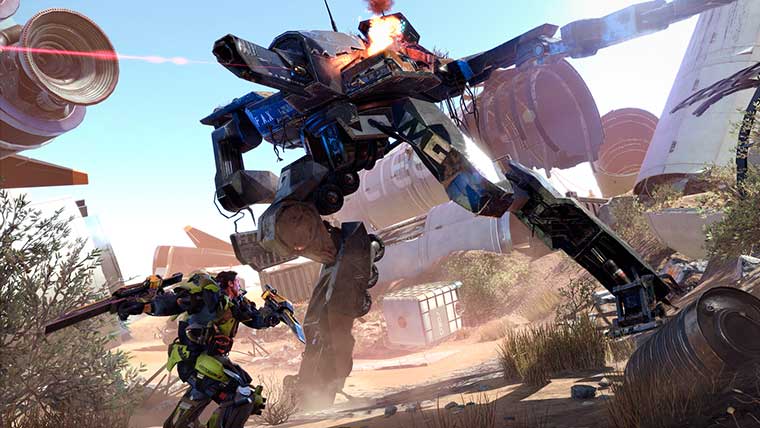 Deck 13 has been down this road before.  The 2014 release of Lords of the Fallen borrowed from the Souls franchise.  Their latest game, The Surge, does so as well.  So much so, that it’s hard to describe The Surge outside of terms that have become synonymous with From Software’s series of games, but I’ll try.  They lean in hard on many of the core features that fans love about that series, while trying to make something wholly different.  In some spots they succeed, where in others they do not.  So what if you have no experience with the Souls series I’m comparing this game to?  Simply put, The Surge is a penalizing action-RPG with deep customization and a unique combat system that has you battling your way through labyrinth-like levels to face big bosses.

It’s a somewhat unique premise.  You play as Warren, a fresh hire on your first day of employment at a mega-corporation called CREO.  A company that is thought to be using science and technology to save a world that is ravaged by war and global warming, you quickly come to find that something has gone wrong here.  Upon arrival you come to find that you are about to have what would be considered the worst possible first day ever.  Robots are running rampant, employees have become corrupted and everything is deadly.  Your mission is ultimately to figure out what has happened here.  Along the way, you’ll be meeting with characters and finding audiolog tapes that slowly begin to add more color to the situation. 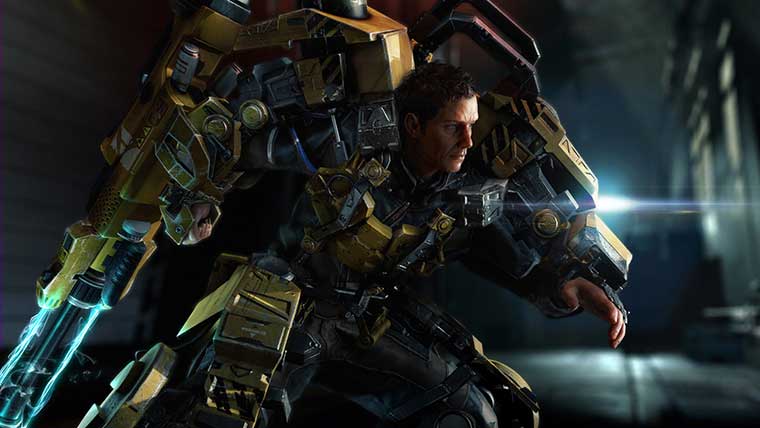 Being an action-RPG, The Surge features third person combat that focuses heavily on melee.  You’ll be using an exo-suit that gives you super-human abilities right from the very start, and you’ll be able to choose one of two variants during the game’s intro.  You can choose a more agile character or a tank-like character, this selection is fairly binary.  However, there will be plenty of chance to further customize your character down the line as one of the game’s coolest features is built around combat, collecting new items to add and upgrade on your exo-suit, and upgrading your character with enhanced abilities.

So here’s where the many comparisons to Dark Souls come into play.  Each level is a maze.  A maze full of enemies, hidden items, unlockable shortcuts, and dangerous traps.  Progress by killing enemies and you’ll be rewarded with scrap.  Die somewhere in the level and you’ll lose all the scrap that you had accrued, that is, if you can’t make it back to that same location without either dying again or letting a countdown timer run out.  In this regard, The Surge feels very much like Dark Souls.  Deck 13 unabashedly borrows these mechanics, some level design aspects, and gameplay elements from the Souls series.  That in itself isn’t all that bad.  This type of game offers challenge, keeps the action tense, and generally gives the player a nice sense of accomplishment when figuring out a level. 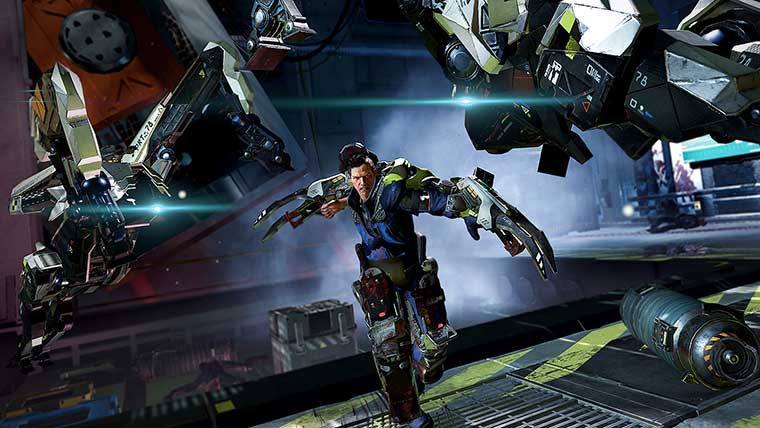 Like Dark Souls, you’ll have a central hub in each area that you can come back to make your upgrades.  Instead of a bonfire it’s called a Med Bay.  You spend the scrap currency that you find to level up your character.  There’s a vending area that you can use the materials that you find to create new weapons and armor for your character as well.  You can also upgrade those items after they’ve been created as you find more valuable materials. As you do level your character, he’ll increase in power level, which allows for different abilities to be put into unlockable slots.  There are quite a few of these upgrades, but they mostly revolve around the three key pillars of your character in combat:  Health, Stamina, and Power.

That’s about as far as I’m going to take the comparison with Dark Souls, because there’s alot here that is pretty original as well.  The aforementioned melee-focused combat is one of those original ideas, and it’s good enough to build a game around, especially if you like crafting and customization.  Each encounter with an enemy in The Surge gives you the opportunity to target a specific part of their body.  During the encounter, you can sever limbs on your enemies if you can build up a power meter to the point of triggering an execution finishing move.  If you hit the targeted part of the enemy enough during the fight, that part of the body will be severed and can be collected for parts.  These parts are many.  There are chest pieces, helmets, arms, legs, weapons, and other items.  If you snag a new piece of armor or weapon from an enemy, you’ll earn a schematic that can be used to build the part for your personal use on your character.  It adds a new dimension to the combat and exploration of levels as you’re always on the lookout for more powerful pieces of armor, scrap currency, and spare parts that are needed for crafting.  It’s by far the most interesting part of The Surge. 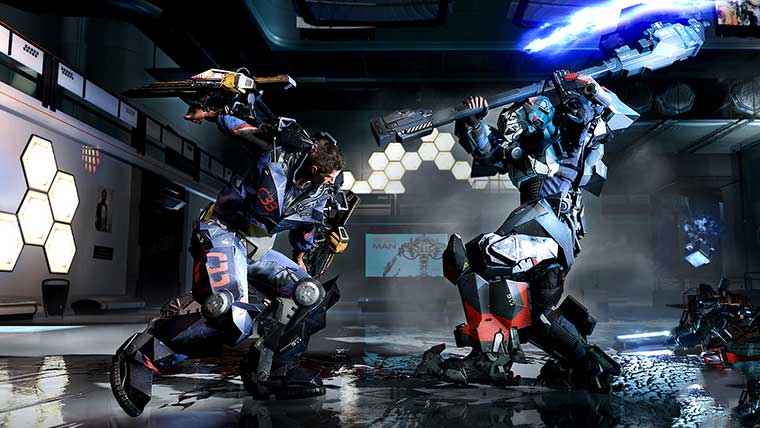 While this element of the game is compelling.  The combat itself isn’t quite as good.  It feels slow and sluggish, despite having many options at your disposal like blocking, boosting, horizontal and vertical attacks, target locking and other things you’d expect from a game like this.  Battles feel like they’re missing something.  Perhaps a roll or something that could better shield enemy attacks would be helpful in making things feel more strategic.  Here, The Surge’s combat feels more like Bloodborne and less like Dark Souls.  As it is, you’re really just managing your stamina, boosting around and trying not to get hit while you mash on the right bumper and trigger until you get the execution prompt or just outright kill the enemy.  The animations are pretty great though, if you do end up getting that severing execution move, you’ll go into a full slow-motion animation of the process letting you know you’ve done what you’ve set out to do.

Deck 13 should certainly be commended for their work on the level design in The Surge.  They do a great job of allowing the player to peel back the layers, uncovering all the mysteries and hidden secrets that they have to offer, while throwing up some pretty agressive roadblocks to progress.  The one and only complaint is that levels are compartmentalized in a way that makes the world feel less organic than if they were connected.  For example, while beating a boss opens a new level to explore, there’s a train that’s taking you from zone to zone.  I guess I just have to compare it to Dark Souls again, that was one of the things that people so heavily praised the Souls series for, is that organic and connected feel that the entire world had.  It doesn’t ruin The Surge, but in the instances where you may need to backtrack, you’ll basically be doing it by train.

Ok, screw it.  I have to keep comparing this to a Souls game because its definitely trying to be one.  But there are a lot of things outside of the core mechanics that make that series so beloved.  The fantastic art design and sounds of the games are two.  The Surge doesn’t even compare here.  If anything, it feels uninspired in the presentation department.  They just don’t have the room to work with when it comes to bosses and level design. The Industrial Science Fiction palette of fighting robots and running around a corporate factory all kinda starts to blend together after awhile.  The repetitive music and computerized greetings are replayed over and over each time you visit your med bay safe room.  Running in to other characters in the world, the voice acting is passable, nothing incredible, nothing too jarring.  While enemy sounds feel like they use the same couple of clips for every type of enemy.  The Surge just doesn’t seem to have the fit and finish of something like the more recent From Software titles.  That said, some of From’s early work in the Souls series was rough around the edges as well.   The Surge definitely scratches that same itch, despite these complaints.

The Surge’s unique spin on combat and customization coupled with some tried and true gameplay mechanics from the Souls series coalesce nicely for what feels like a familiar experience in an entirely new setting.