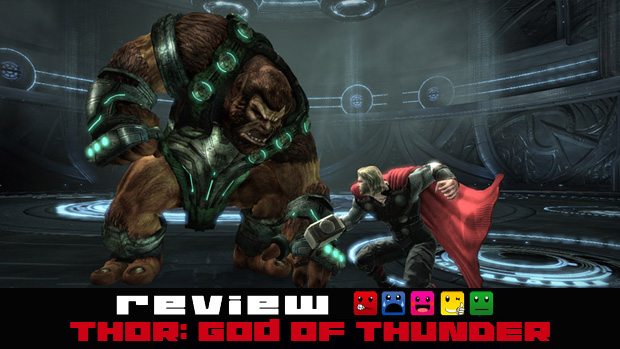 Brace yourself for a mighty storm — the legendary pages of the classic Thor comics are coming to life, and it’s going to be a sky-rumbling, earth-shaking ride. The storied hammer, Mjolnir, is yours to wield as you become the God of Thunder in this epic new adventure. The power to shift the storm is in your hands and it is up to you to decide how to use it and whom to use it against. Enter a sprawling mythological world ruled by the elemental forces of fire and ice. Face unimaginable creatures, including frost giants, trolls and other unthinkable monsters. Become the legend. Become Thor. – Sega

Time after time developers and publishers get the bright idea that it would somehow be worth it to take what could be a wildly successful video game property, bottle it, and sell it as a marketing push for a corresponding movie.  It’s a practice that has been going on for sometime now, and its probably the worst possible strategy that these marketers can come up with.  It must be a profitable strategy, because it never ends.   As a fan of Marvel comics, the concept of a video game based in the Norse lore of the Thor universe is intriguing.  There’s a ton of back catalog to work with, great art to ponder over for inspiration, and a character that is bigger than life itself in the God of Thunder.

However, where you imagination ends, Thor: God of Thunder begins.  From that point on, you’ll be left dumbfounded and confused at how or why you been left holding the bag in yet another horrible, lost in translation, adaptation of one of the most iconic comic book heroes of all time.

Games have evolved over the past 10 years probably more so than ever before.  Developers and publishers have realized that to create popular franchises there needs to be something that distinguishes your game from the 100’s of other titles that can be released on any given year.  It appears that the messenger stopped off at the bar, on route to give Sega this message, because Thor: God of Thunder is quite possibly the most generic game I have played in quite some time.

Thor: God of Thunder runs a tired, flawed, and unoriginal set of gameplay mechanics in its mediocre campaign.  Playing as Thor, you’ll learn just about everything there is to know in the first five minutes of gameplay.    The premise is simple. Press X.  Press Y once in a while to do other stuff, but for the love of god don’t stop pressing X.  Being that Thor: God of Thunder is a beat-em-up style action game it’s expected that there’s going to be some level of button mashing.  Though, there’s a huge difference between a game that is a button masher and one that is as uninspired as Thor.  There’s no rhythm to the combat mechanics.  The sweet spot in better games in the same genre, are through the intuitive use of both the graphics and rhythm of combat to trick you into forgetting that you’re pretty much repeating the same thing over and over.  In Thor: God of Thunder, there’s no trickery.  It straight up tells you from the beginning that it’s mediocre and to expect nothing more than futility throughout your time with this game from a gameplay stance.  From soup to nuts the gameplay is uninspired. Sure, Thor incorporates a hefty leveling system for your character to progress and garner upgraded attacks, but there’s really no sense of progression or difficulty as the game moves forward.  Just a whole lot of pressing X.

Outside of the core gameplay mechanic in it’s fighting, Thor sends you on a poorly conceptualized adventure.  It makes the grand mistake of assuming that you are familiar with the lore of the Thor comics, and does little to introduce you to the world or the characters that reside in it.  When you hear the terms “cookie cutter game design”  after playing Thor: God of Thunder this title will spring to mind from this point forward.  Because of the lack of explanation, and little to no emotional attachment to the characters through story development, the experience from a gameplay stance is very weak.

Not to be outdone by its mediocre offerings to those that have some semblance of a brain, gamers that take a more critical stance on visuals will also be disappointed in Thor: God of Thunder.  At it’s very best, during it’s “boss battles”  Thor comes off as a 2005 title in the graphics department. This is sad when you compare it to other more robust visual offerings that are created with the Unreal Engine 3.  Having all the tools to compete with more honored games in the genre, it’s unfortunate that the game makes little attempt to capture the magic of the great art that was created in the Thor comics.

It looks exactly as you would imagine a movie based video game would look.  Complete with poorly rendered character models, helmet head, and an approach to graphics that throws detail to the wayside.  One key area that Thor: God of Thunder needed to address with it’s graphics were in Thor’s special attacks.  Sega could have killed two birds with one stone by giving the attacks a grander feel.  As it stands, completing a thunder or lightning attack feels underwhelming and as a result you feel less like a super-hero and more like some dude with a hammer.  In general, the presentation for Thor: God of Thunder is underwhelming.  No matter what you are looking to critique, whether it be the poorly rendered cut-scenes, the monotonous fights that make up the majority of the game, or just the world that was created, Thor: God of Thunder does little to draw you in and earn your attention.

Thor: God of Thunder was a cash grab, plain and simple.  It was an opportunity for a the movie studio to make a little extra cash with a movie tie-in for the game.  No matter how many times a PR rep will stand in front of a camera and tell you otherwise, Thor: God of Thunder is based on the movie.  There are set piece moments that are featured in both the film and the game, and when your main character is modeled after the lead actor for the movie, you GAME IS BASED ON THE MOVIE.

Thor probably could have been made into a great game, with Asgard being a beautiful backdrop from the comics, and a large wealth of story content to pull from.   Unfortunately Thor: God of Thunder was a rush job.  Little was done to expand on the universe and instead of the celebration for fans of the comics to get the opportunity to harness the powers of the Mjolnir, ‘they instead get further evidence to suggest that if a movie is coming out anywhere near the arrival of the game, heed warning, it probably sucks.

What could of made Thor: God of Thunder a better game?  Not much really.  It needed a development team that actually cared about the content they were delivering, especially to fans of the Thor franchise pre-Hollywood.  For those fans, this is a devastating disappointment that is all too common place these days.  A start would be drawing from the comic books instead of world that consists of two hours of film.

It’s very rare that we actually dislike a game so much that it invokes hatred.  Unfortunately, this comes from the blatant misuse of what could have been an extremely promising video game franchise.  Why developers can’t seem to get these things right after 20 years of playing this sort of crap is beyond me.  Why is that?  Because it is what it is.  It’s a cash grab.  There’s no emotional involvement here, there’s no original creation of content for the game, it’s not someones baby that has been toiled over for years to make perfect.  These things show.  They show in their generic presentation, redundant gameplay mechanics, and blatant misuse of one of Marvel’s most iconic franchises.