One of the underrated Wii U releases gets a second chance at life. 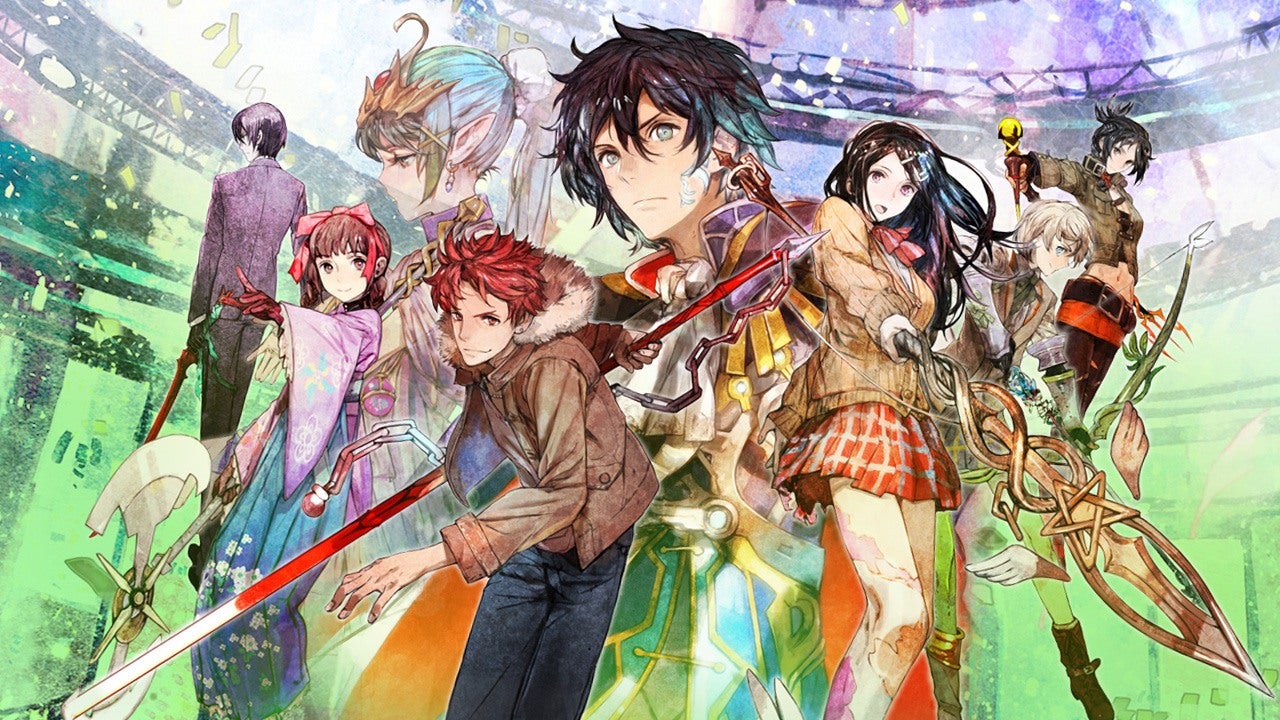 Crossover video games are certainly nothing new, but there is always something special about seeing two often very different franchises come together into one. Tokyo Mirage Sessions #FE was a great example of this when it released on the Wii U as a combination between Atlus’ Shin Megami Tensei series and Nintendo’s Fire Emblem series. While not quite what people were expecting in a crossover between the two popular series, the game was still received fairly well. Following the success of other Wii U ports to the Nintendo Switch, the game is getting a second lease on life as Tokyo Mirage Sessions #FE Encore.

Rather than having a medieval like setting that Fire Emblem fans are used to, Tokyo Mirage Sessions #FE Encore is set in present day Tokyo. This quickly makes you feel more like you’re playing a Shin Megami Tensei game than a Fire Emblem game, which is kind of the feeling you will get through most of the game. 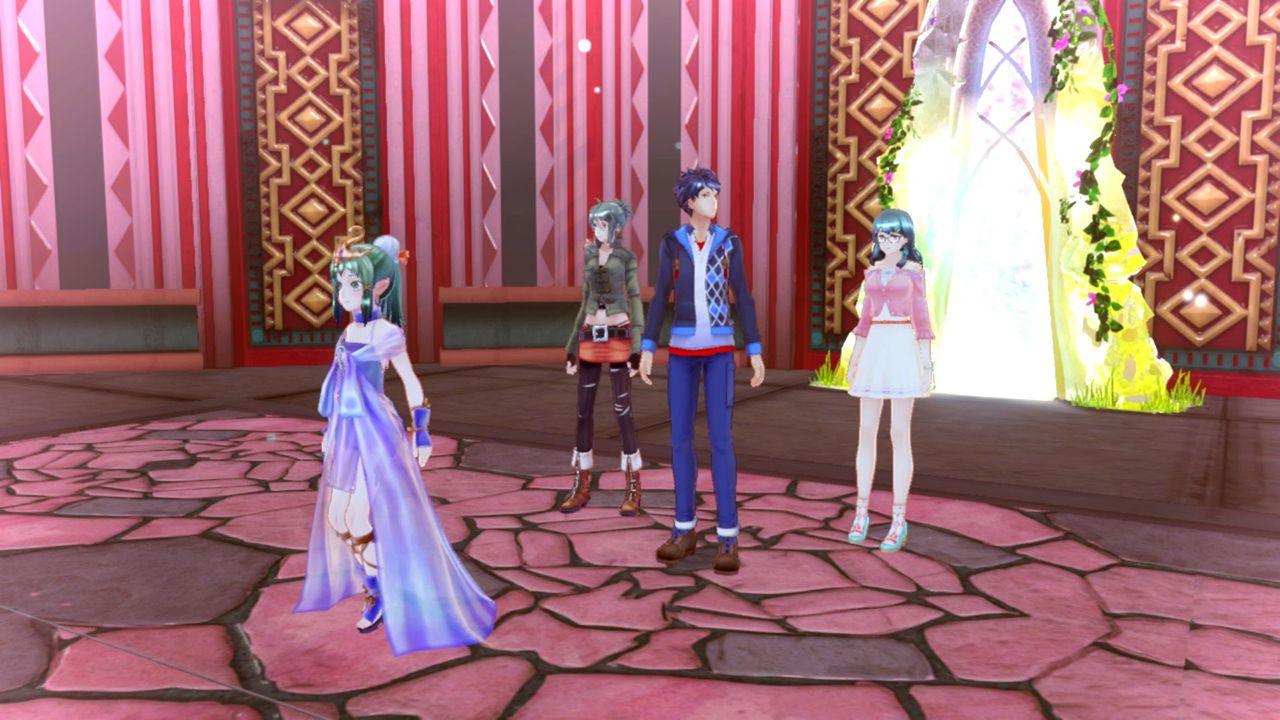 Tokyo Mirage Sessions #FE Encore starts with a beautifully animated anime style cutscene where a little girl is at a concert and everyone but her disappears.  The game then skips ahead fives years as you take control of protagonist Itsuki Aoi, who comes across his friend Tsubasa Oribe, the little girl who was the only one remaining at the earlier concert, who is standing outside of an idol audition event. He is surprised to learn that she is actually auditioning herself, but everything quickly devolves into madness as things go awry when the power of expressions, which are known as Performa in this world, starts being taken from most everyone and both Itsuki and Tsubasa end up in what is known as the Idolasphere as a result.

The Idolasphere is the dungeon oriented part of the game, where your party members end up getting paired up with what are known as Mirages to become Mirage Masters. These Mirages are actually based on characters from the Fire Emblem series, such as Itsuki being paired with Chrom. Itsuki and Tsubasa really get thrown right into the Idolasphere without any real information about what is going on, with their friend Touma Akagi getting introduced and serving as the one to fill them in on the information. Upon escaping the Idolasphere, they are approached by a woman named Maiko who runs Fortuna Entertainment. She asks them to join her to help combat the enemy Mirages, with Tsubasa immediately agreeing to join to help her sister, who was a singer that disappeared at that concert five years prior as a result of the Mirages. The characters and story itself are all quite interesting, with the mysteries being what keeps you really invested.

When in battle, the Mirages are not just summoned to take on the enemies, but rather actually fuse with their partner and become a weapon to take part in the combat as one entity. This adds some interesting designs to the game that are much more wild and over the top than the main playable characters, which definitely trend more towards what you might expect from Fire Emblem. Getting to see the Fire Emblem characters introduced as the Mirages are great, with some even showing up as evil Mirages as well. 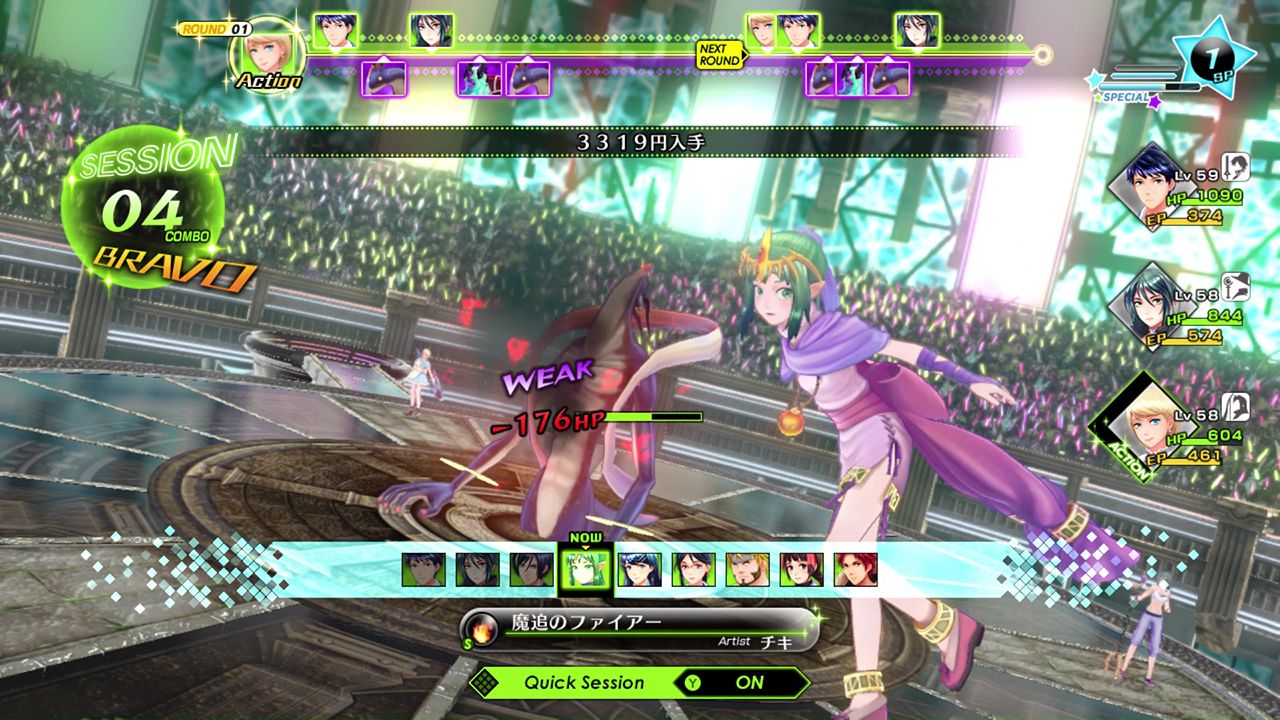 Both Fire Emblem and Shin Megami Tensei feature differing gameplay styles for their combat, with the turn-based approach and enemy weaknesses being a common denominator between them. Tokyo Mirage Sessions #FE Encore’s combat is more like that of the latter, with a traditional turn-based RPG style that you’d find in other Shin Megami Tensei games, rather than the grid based approach found in Fire Emblem. What is neat as a way to bridge the two series together though is that the enemy weakness system takes from both, with the weapon-based weaknesses being taken from Fire Emblem and the magic-based weaknesses coming from Shin Megami Tensei.

Starting off outside of battle, you will find Mirages around the Idolasphere that will pop up and try to touch you to enter battle. If you manage to hit the enemy with X before the battle begins, it will pull back and allow you to touch it to get a jump on them in battle. From there, the combat features the aforementioned turn-based approach, where your party members and the enemy Mirages alternate using commands. The speed of each character can play a big factor here too, as there is a timeline at the top of the screen in battle that will let you know the order of upcoming attackers based on speed.

Each character has a basic attack option that they can use in battle, but where the real fun begins is with the Skill command. Within this option, you have different special moves at your disposal, some offensive and some defensive. You do not have instant access to a bunch of these, however, as these are learned by leveling up what are known as Carnage. These are the weapons mentioned above that the Mirages can turn into, which each have a different number of learnable skills held within them. By collecting the previously mentioned Performa from enemies in battle, you can then go speak with a special Mirage from the Fire Emblem series named Tiki to get new Carnage through a ritual known as Carnage Unity. 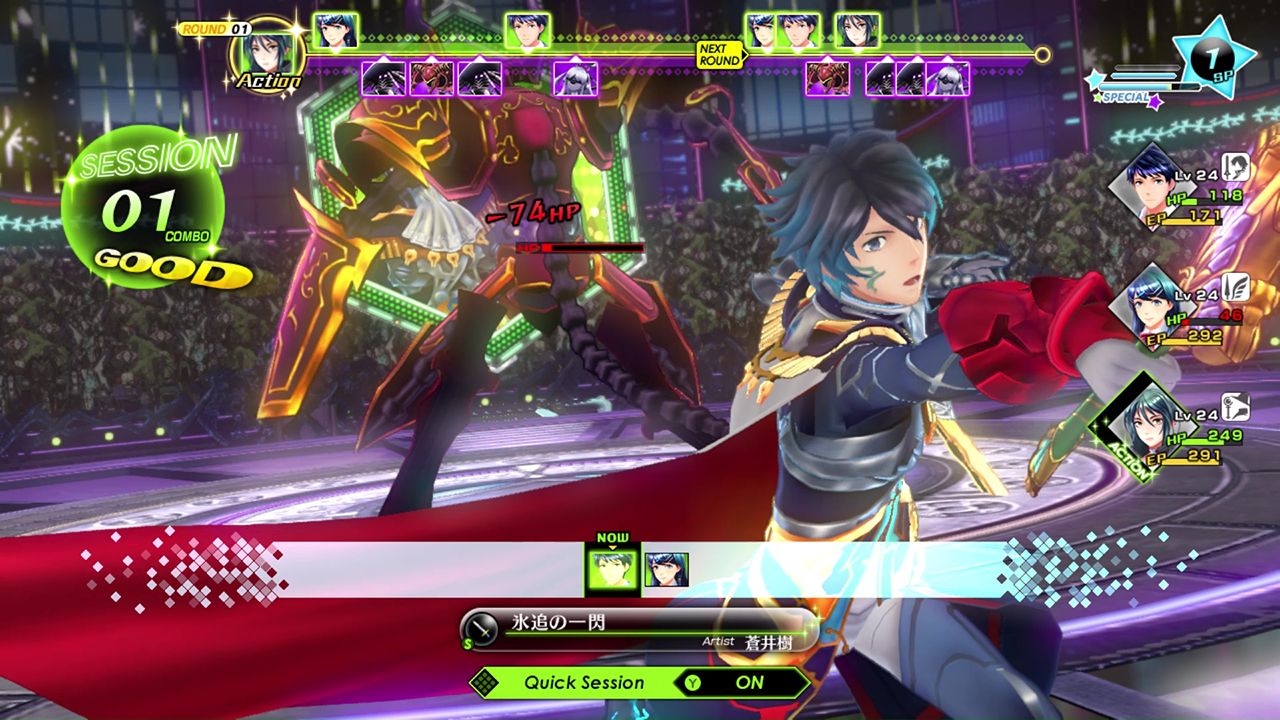 There’s even more to the gameplay as well, as there is one other major factor that plays a major role in your battles. If you hit an enemy with an attack they are weak to, which is shown by a green exclamation point,, you will trigger what is known as a Session. Sessions are automatic team up attacks that rely on the type of skills being used and whether one of your party members have a corresponding skill to use as well. These are a lot of fun to use throughout the game, adding a little of the performance aspect of the game beyond just the story.

It wouldn’t be a Shin Megami Tensei related game without the ability to walk around and interact with NPCs outside of the dungeons to take on sidequests. Tokyo Mirage Sessions #FE Encore has just that, as you get to explore around Tokyo locales such as Shibuya.  The actual side stories you come across here actually feel like they are more similar to the support conversations from Fire Emblem, though now with a Shin Megami Tensei flair. 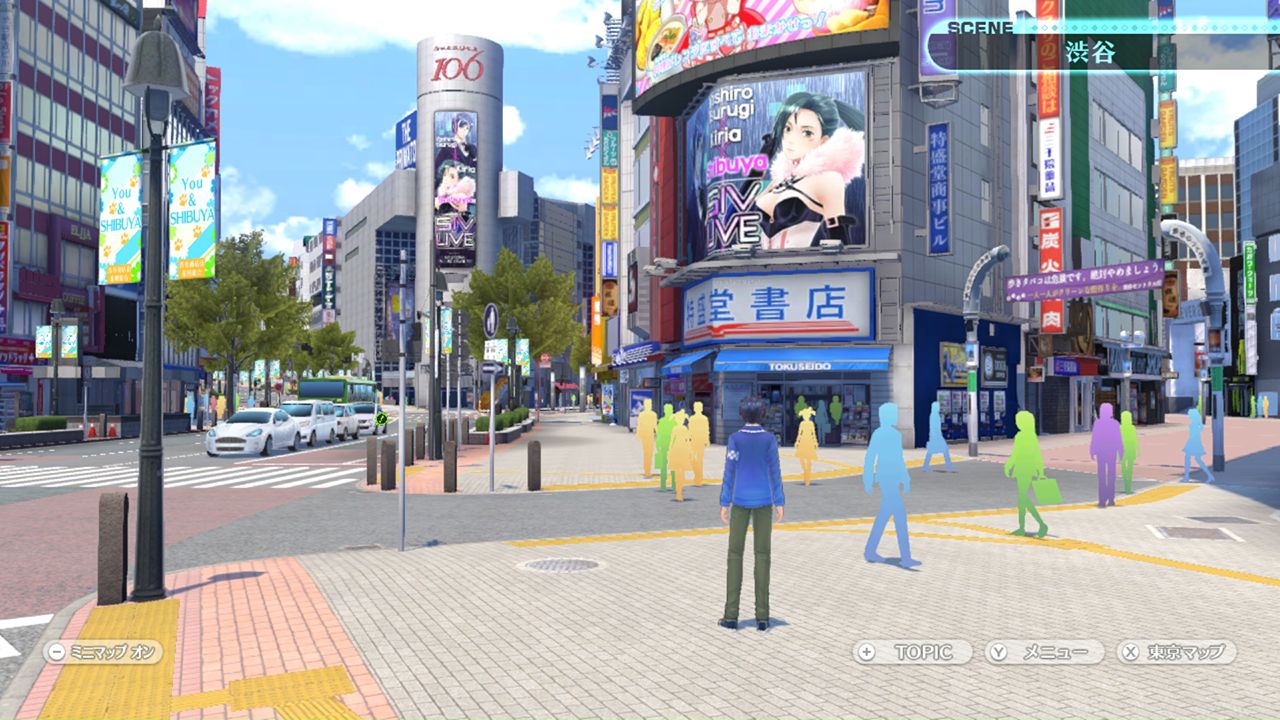 Just like the original release on Wii U, Tokyo Mirage Sessions #FE Encore only features a Japanese voice track. Both Shin Megami Tensei and Fire Emblem have included English voice tracks in past games, so it felt weird to not at least have it as an option this time around. This isn’t a major problem, but it does get annoying when the characters speak during battle at times and there are no subtitles to let you know what they are saying unless you speak Japanese.

Tokyo Mirage Sessions #FE Encore relies entirely on a manual save system, which you can access at any time outside of battle by bringing up the menu and going into the settings. This is the type of game that can throw some difficult fights your way too, so it’s important to save as often as you can. This is where it would have been helpful to have seen some sort of auto-save system being added in on Switch, especially with players taking the system on the go and picking the game up for a few minutes here and a few minutes there. With the different skills you’ll be learning and the continual dungeon exploration, losing just a few minutes of playtime due to not saving will set you back every time. 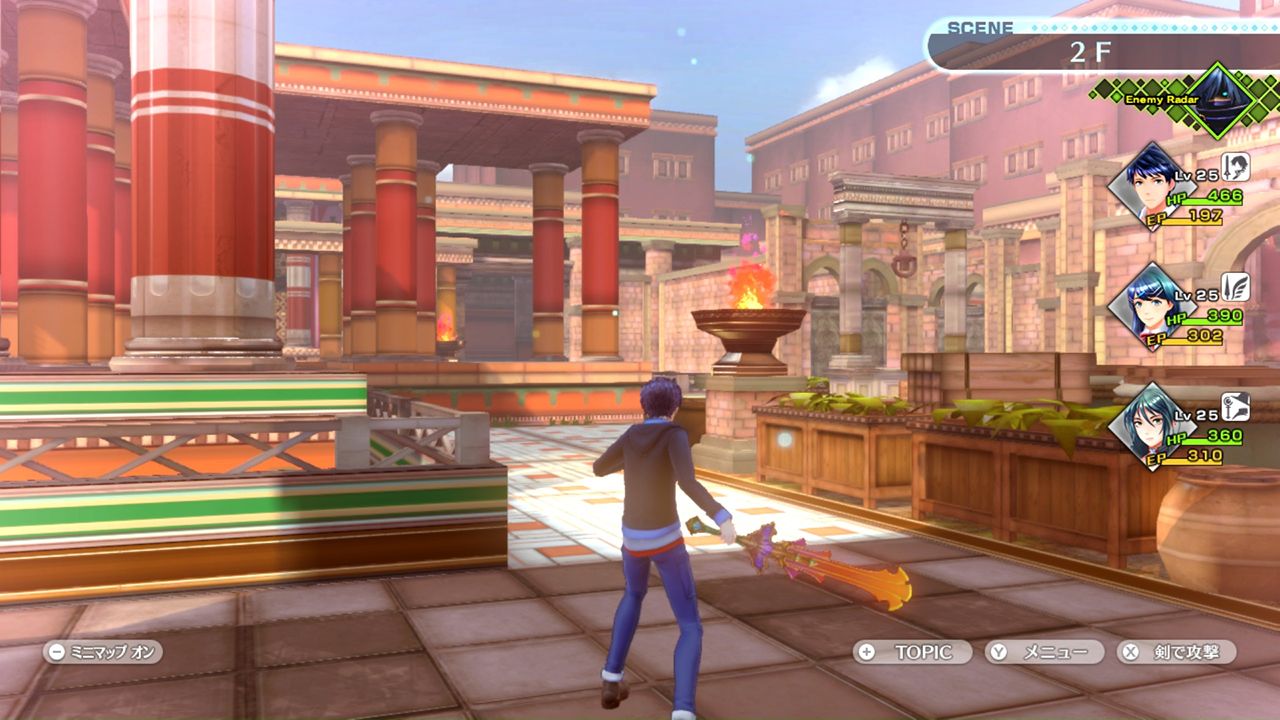 Atlus did not just go and make a straight port of the Wii U version for the Nintendo Switch either, as there are some extras added in on this version. Not only is all of the DLC from the original release included here, but this version also adds in some new characters stories that are very worth playing and the ability to use additional characters like Tiki in Sessions. There are also some new methods of speeding up the combat as a whole with the Sessions, which is something some players may enjoy that find the combat too slow. This isn’t as drastic a difference as say the speed up feature in a game like Final Fantasy XII: The Zodiac Age though, as it was desperately needed there.

Yet another previously Wii U exclusive has made its way to the Nintendo Switch with Tokyo Mirage Sessions #FE Encore, this one being a game many thought might get skipped over. With a much larger install base this time around, Tokyo Mirage Sessions #FE Encore deserves to find more success than before thanks to an interesting story and enjoyable combat system that should appeal to fans of both franchises.

While Tokyo Mirage Sessions #FE Encore may not have quite as much Fire Emblem influence as some fans may want, the two series go very well together with a unique premise and Mirage system that is overlaid upon a pretty traditional turn-based system at its core that will satisfy both fan bases.