The latest news in the world of video games at Attack of the Fanboy
October 2nd, 2010 by William Schwartz 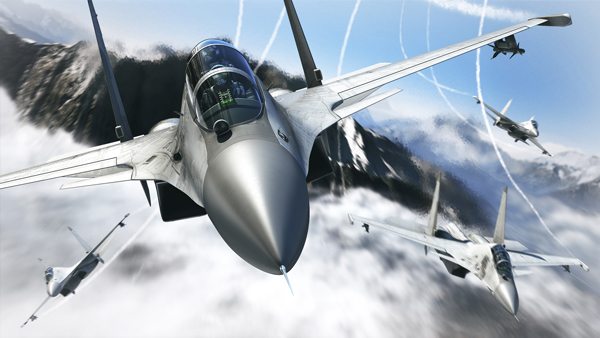 Tom Clancy’s H.A.W.X. 2 plunges fans into an explosive environment where they can become elite aerial soldiers in control of the world’s most technologically advanced aircraft. The game will appeal to a wide array of gamers as players will have the chance to control exceptional pilots trained to use cutting edge technology in amazing aerial warfare missions. [Ubisoft]

As a fan of Clancy games in general, I anticipated H.A.W.X.  I think the verdict was unanimous when gamers were a little underwhelmed by the first offering in the series.  H.A.W.X. 2 however fills in some of the gaps that the previous game left in the gameplay department.  Where the first game was a bit monotone, H.A.W.X. 2 has a nice variety of missions to take on.  Missions where players will be controlling modern fighter jets are still the bulk of the gameplay, but peppered in throughout the medium length campaign are AC-130 bombing runs, Predator Drone Search and Destroy Missions, and intelligence reconnaissance missions.  Ubisoft did well to incorporate some gameplay other than the standard flying sequences.

The controls for H.A.W.X. 2 are still very similar to the first game, but have been tweaked a bit.  If you are looking for a flight simulator, Tom Clancy’s H.A.W.X. 2 is not that.  It’s got a great arcade feel to it, that is fairly straight forward, uncomplicated, and above all else fun in small doses.

This time around Ubisoft pushes the narrative of the game up a notch.  Utilizing the characters from other Clancy titles, you will find yourself in communication with familiar faces from the Ghost Recon and Splinter Cell franchises.   Overall,  the game did a better job of hitting that sweet spot that Clancy books and games are known for.  In comparison to the first game, the advancement in the story telling of H.A.W.X. 2 is a big jump.  Where I personally felt disconnected from the story for many reasons in the first game, H.A.W.X. 2 does a better job of linking the cutscenes and gameplay for a more believable experience.  It’s a story of espionage, and that’s where Tom Clancy shines.  While the game is far from perfect in the story telling department, at least there was a story telling department.

Similar to the Call of Duty formula, H.A.W.X. 2 follows multiple pilots in the United States, British, and Russian air forces.  Shifting back and forth between the different pilots the story is told from the perspective of the countries and for the most part this style of story telling works well.

It’s true that there are a lot of new features in H.A.W.X. 2, but most of the jet flight missions fall into a very familiar pattern by the end of the game.  Take out Anti Air Guns, Take out Planes, defending something or other, it all feels rather routine.  Where you see the potential for big things is in the missions where the formula is changed.  For example, one mission calls for you to steal a plane, take off from a runway littered with machine gun fire, and then get away through a canyon.  It’s fun and challenging, but above all it’s different.  The game could take advantage of the excellent base that the developers have made, but instead they routinely take you on the same ride and after a while it does become a little monotonous.  A step in right direction, but not quite the giant leap in varied gameplay I was expecting from the game.

H.A.W.X. 2 feels at it’s finest during the missions where you are working as a coordinated attack/defense force rather than a lone wolf.  The single player campaign is plauged by some glaring problems in this department.  It’s all too often that while working as a “team” you get the distinct feeling that you are doing everything on your own. Computer controlled planes do little to help on many occasions and for some missions it can be quite trying.

Aside from the obviously flawed A.I., the game does offer little variance in the way that the different aircraft feel in flight.  With that being said there is little to no difference to be had by the player, which makes unlocking the different planes somewhat of a moot point.

Tom Clancy’s H.A.W.X. 2 is a tale of two stories.  On the one hand, and for the greater part of the game, you have a game which depicts various military air forces and their roles in conflict across the world. By the end of the game you are dodging laser beams from a satellite  and shooting nuclear rockets out of the sky.  There was a huge disconnect for me when the game took the turn from believable and authentic, to WTF.

Along with this turn for the worse that game takes as it’s coming to a close, there is also a huge jump up in difficulty.  Not your standard game which increases level by level, H.A.W.X. 2 goes from invincible to unbeatable in a few short moments.  Expect at least 10-20 replays in certain areas of the campaign, and as mentioned above the friendly A.I. has a little bit to do with this.

There were some parts of H.A.W.X. 2 that I really really enjoyed.  The authentic part of the game, the huge and realistic maps, the great graphics, even the realistic sound effects and com chatter were great.  The game has a ton of options to explore in the multiplayer component, survival modes, and free roam.  But, in the end the game just didn’t hit that sweet spot for me.  A solid offering from Ubisoft will have fans of the original clamoring for H.A.W.X.3 with the inclusion of all the new features, but for me the game keeps hitting the same rut of unfulfilled potential.  Fun and enjoyable in small doses H.A.W.X. 2 got a neutral rating from me, as the good pretty much outweighs the bad.  Which is better than the first at least.