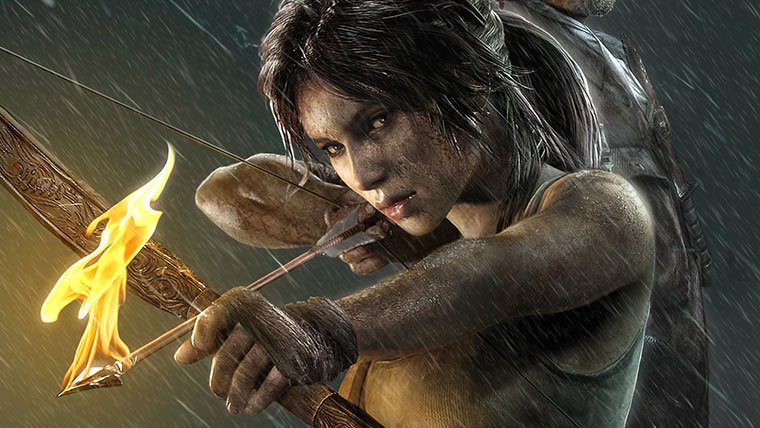 She might be the most recognizable female protagonist in video games, but Lara Croft comes from an era where story was secondary in action-oriented titles like those found in the Tomb Raider franchise.  So with Crystal Dynamics’ reboot of the long running series, they’ve set out to tell the tale of Lara Croft right from the very beginning, while using just about every thing you’ve come to expect from AAA action games in the current generation, and then some.

This is Lara’s first adventure, and one that seemingly shapes her into the fearless explorer that previous games in the franchise portray her as.  Lara and an archaeological team are trying to track down Tomb Raider’s version of the Lost City of Atlantis. By way of sea, they trek into an area known as the Dragon’s Triangle under Lara’s suggestion. When their ship sinks, this island adventure begins for Ms.  Croft and company. Players don’t start out as the self-assured Lara Croft that previous games in the franchise have portrayed her as.  This is a younger version of the heroine, and one that is learning on the fly just how brutal the world of treasure hunting can be.  Shipwrecked on an island full of cultists, separated from her crew, cold and hungry, Lara will soon realize that she’ll be needing to fend for herself if she wants to survive.  While it’s a brief transition in the actual game, Crystal Dynamics uses a glorified tutorial system to get Lara acquainted with surviving  on the island.  Using campfires for warmth, using a bow to hunt for food, and scavenging her surroundings for scraps to make improvements to her gear; the foundation for a deep adventure is set early.  Tomb Raider is part open world sandbox which requires exploration and discovery as integral pieces to progression, and part linear action-adventure full of the staples that have come to be expected in this type of game. The results are such that this new Tomb Raider feels remarkably fresh and especially so within the franchise itself.  While it calls back to some older Tomb Raider staples, this is certainly not the Tomb Raider that fans of the franchise will remember. 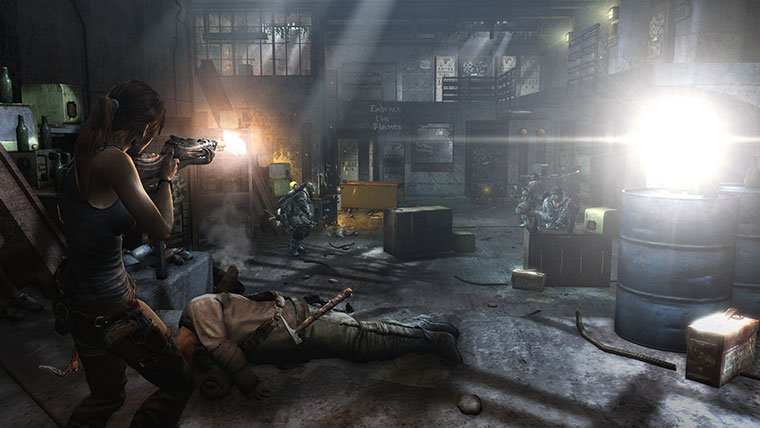 This Tomb Raider is a bigger game, a more expansive experience that relies on much more than puzzle solving for progression.  It’s a combination of beautiful set piece moments that AAA action games have become addicted to, quick-time events, combat with a range of choice, and the traditional puzzles that Tomb Raider fans will find familiar. It’s very easy to draw comparisons between Crystal Dynamics new Tomb Raider title and Naughty Dog’s Uncharted franchise. The similarities are almost immediately noticed, aside from the main character obviously. You’ll find the same types of beauty, a lot of the same gameplay delivery mechanics, and some scenarios that seem like they’ve been ripped straight from Uncharted completely. It’s fair game to draw these comparisons. Naughty Dog has been dealing with them for a while with their Uncharted franchise, and the many ways it has been compared to a modern day Tomb Raider. Though making its way into the next-generation for Tomb Raider means it has to incorporate these types of cinematic action sequences that the competition uses, however Tomb Raider isn’t an Uncharted clone by any means.

Similarities aside, there are a lot of ways that Tomb Raider differentiates itself. The game features a character progression system that grows with Lara as she goes from docile archaeologist to war-ready soldier, and there’s far more freedom in Tomb Raider than you’ll find in similar games. You can stick to the story path or venture off into caves for a more traditional tomb raiding experience. Your rewards are tied directly to the game’s XP system, which allows for a number of different ways to level Lara’s abilities and weapons. Your exploration will reward you with artifacts, and taking the path less traveled will often give you bonuses which can be used at one of the many campfire zones littered across the island. Killing enemies and looting their rotting corpses will sometimes score you weapon parts, which can be used to upgrade your tools of destruction to more powerful varieties. It’s the crux of Lara’s progression in Tomb Raider. This system lays the foundation for the character changes that you see in Lara throughout the game. From a helpless castaway that shows obvious trouble with even killing an animal for survival, to a more empowered version of herself that won’t think twice about burying her pick-axe deep in your cranium if you’re in her way. The system in place that gives new weapons and gear to use as the game progresses is an exciting twist to the action adventure genre. It allows for extensive back-tracking to areas that you might not have been able to reach on your first run. This gear also comes into play as one of the integral parts that separates this from not just the Uncharteds of the world, but from the Tomb Raider franchise that we’ve seen over the years. Lara more believably traverses her environment with a climbing axe, combined with the bow upgrades and other unlockables, she becomes one the more rooted in reality protagonists we’ve seen in some time. 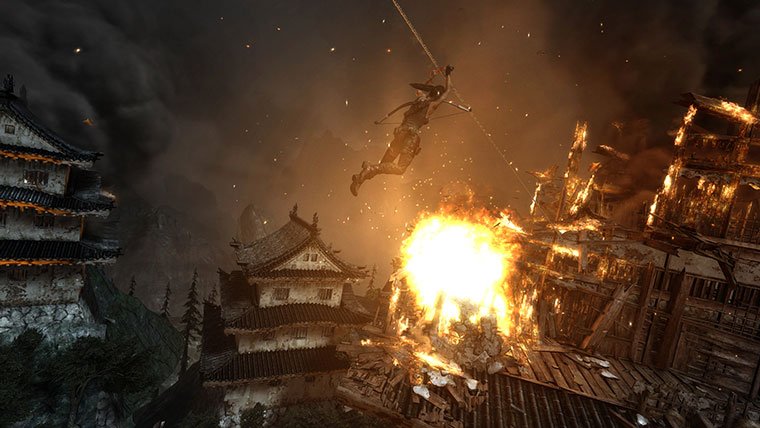 This leveling system goes for naught if the combat isn’t any good. Which is why it’s relief that combat is one of the most fulfilling elements of Tomb Raider. The variety of weapons and their powerups and ways to use the environment make encounters play out in entirely different ways according to player decision. You can stealthily sneak up on enemies and dispatch them without anyone becoming the wiser, or you can take a more forward approach and come out guns,arrows,or pickaxe blazing. It’s a good thing that the combat is decent, because its a good part of the Tomb Raider experience. For every artifact you discover, you’ll lay waste to dozens of crazy cultists. The island is completely overrun with these baddies. At times it can feel like a little much, you’ll likely begin to wonder where these guys are coming from. Though explored briefly at the game’s onset, Lara loses her vulnerability pretty quickly. It doesn’t take long before you feel like you have the upper-hand in nearly any encounter. Lara transitions from the hunted to the hunter pretty quickly, and your constantly growing list of weapons, ample ammunition caches and regenerating health continually reinforce this.

Those who put presentation first will not be disappointed with Tomb Raider, but they also won’t be making sacrifices

By and large the single player side of Tomb Raider is a game that shows off an incredible attention to detail in both the way that the story is told, and the way the player interacts and grows alongside it. As well known as Lara is, Crystal Dynamics does a good job of making you feel the transition of the character. It doesn’t hurt Tomb Raider’s case that it is also an incredible looking game with some unforgettable sequences. A dynamic camera makes for a heightened sense of danger, while also highlighting the beauty of the island when the story calls for it. Those who put presentation first will not be disappointed with Tomb Raider, but they also won’t be making sacrifices in the gameplay, story or length of the game either. It’s a well rounded experience that last upwards of 12-15 hours depending on play style, but there’s very little reason to return to island once complete.

If there’s one glaring bad spot for the single player portion of Tomb Raider, it’s that there’s not enough side content. While you’ll find plenty of secrets to uncover on the island, there’s very little depth to any of it once you find it. There’s no reward outside of the XP boost you receive for clearing a tomb, and the puzzles that are usually encountered are clever but not overly complex. These side tombs usually consist of you travelling down a fairly linear path, solving a quick puzzle, and being on your way. It would have been nice to see more depth to these side excursions. With very little bearing on the actual storyline, this side content doesn’t round out the experience as fully as it probably could have.

Though as much as the single player of Tomb Raider is a spot-on hit in the gameplay department, it’s not so good as to warrant a multiplayer mode built completely around it.  Obviously the intent is to keep the party going after finishing the story, but sometimes it’s just not necessary.  Tomb Raider is one of those cases where its not.  Taking control of a variety of characters from the single player portion of the game, Tomb Raider multiplayer opens the world up to a variety of modes to play.  It’s pretty standard stuff, really.  You’ve got your traditional deathmatch mode, and then three other modes which are slight variations of what you’ll find in just about every other multiplayer experience on the market.  As is also expected, a rather standard weapons and skill buff upgrade system which is used by earning experience points in multiplayer.  XP from single player does not carry over to the online side of things, which is a weird decision considering that it could have given even more reason to explore the single player world more thoroughly.

So just because it seems pretty run-of-the-mill, does that mean there’s no fun to be had with Tomb Raider multiplayer?  No, not exactly.  This third person shooter offering definitely has some great moments and does some things well, but it’s pretty easy to tell that multiplayer wasn’t given the same amount of attention as single player.  While it strives to recreate some of the cinematic moments from the campaign, its hard to recreate that in the multiplayer side of things without going full-on Uncharted 3 about it, and Tomb Raider doesn’t do that.  Instead it relies on some shakey cam action, zip lines and parkour for you to get your kicks.  It throws in some interesting sidebar mechanics to the traditional formula as well.  The bow and arrow is one of the starting weapons for the Solari faction and that adds some dimension to the game.  Players can set up snare traps for the other team, which will leave them dangling upside down while they wait for you to come finish them off. There’s a lot of little things that are fun about Tomb Raider’s online modes, but there’s a real lack of polish on this side of the game when compared to industry leaders. Tomb Raider multiplayer could be fun in small doses, but its not the kind of third person experience that’ll have players committing days of their lives to. It’s not even close to the third person powerhouse, Gears of War, and Uncharted 3 has a prettier and more stable version of this same brand of multiplayer, which coincidentally went free to play this week.

Tomb Raider is back in a big way. This third person adventure is the best we’ve ever seen of its kind. Yes, that explicitly includes you, Uncharted. The comparisons between Tomb Raider and the Uncharted franchise will likely rage on between fans, but the simple fact of the matter is, that Crystal Dynamics has built a better mousetrap and iterated on the formula. It rarely makes a misstep in the single player campaign, and for longtime fans, it’s an even more interesting look into the origin story of this iconic character. The bar has been raised for games that want to offer both a cinematic experience and compelling gameplay. You can take it to the bank that Tomb Raider will be returning after this revival of the franchise, lets just hope they get multiplayer right next time around.