The latest news in the world of video games at Attack of the Fanboy
May 24th, 2016 by William Schwartz 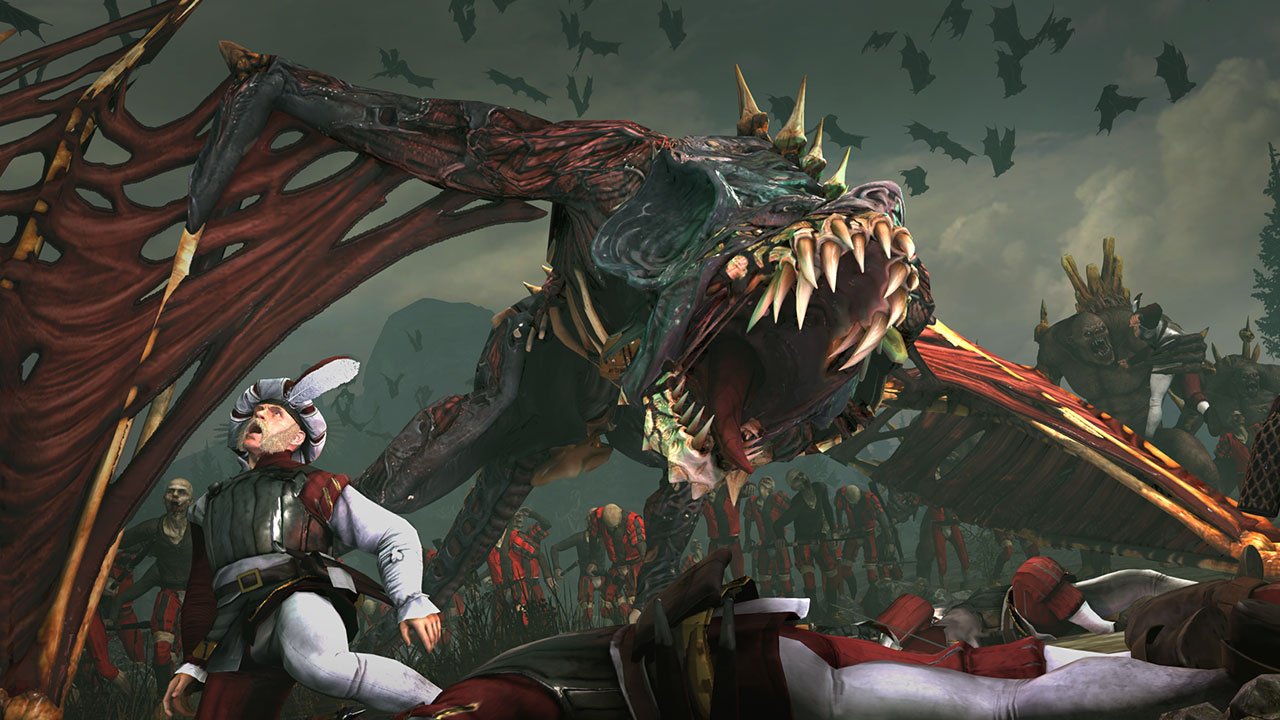 Fans of the Total War series have come to expect a number of things over the years — deep multi-layered strategy and real time battles during interesting periods in history.  In Total War: Warhammer, Creative Assembly pulls off an incredible feat of mashing together two incredible properties giving players a sprawling conquest, with multiple factions, set in the Warhammer universe.  This high-fantasy setting is something that fits incredibly well into the Total War package.  You get all the things you’ve come to expect, with a more interesting, fictional backbone to the ordeal that leads to one of, if not the, very best Total War games to date.

Being that this is a mash-up of two distinct properties that just so happen to fit together nicely, there is most certainly a learning curve associated for both types of fan coming to Total War: Warhammer.  On one hand, where Total War games have traditionally had multiple warring factions that had largely similar abilities to master, Total War: Warhammer offers more variety when it comes to its campaigns.  You can choose between The Empire, The Dwarfs, The Greenskins, Vampire Counts, as well as a Chaos Faction for pre-order customers.  Each with a wide variety of weapons, abilities, leaders, lords, unit types, and deep tech trees to explore.  For Warhammer fans, on the other hand, there’s a lot of Total War nuance to learn here as well.  The commanding of armies, your conquest across the world, managing things like your economy, territories, and infrastructure within, as well as diplomacy with  other factions.  Though regardless, whether you’re a Warhammer fan coming to Total War or a Total War fan entering the Warhammer universe for the first time, it’s hard not to be impressed by one of Creative Assembly’s most polished and fleshed out efforts yet. 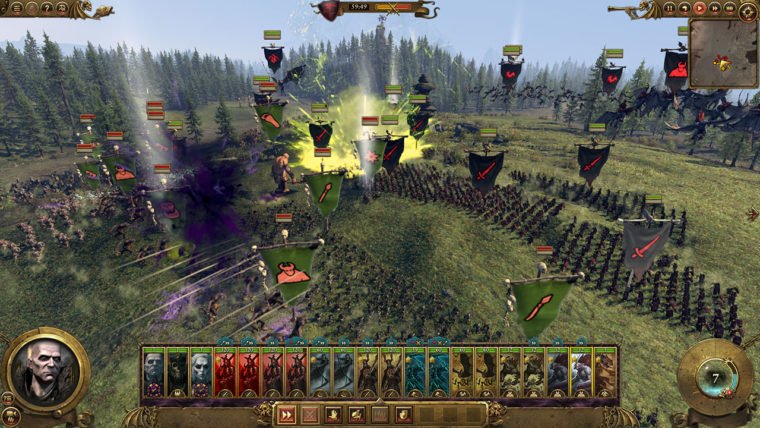 Total War: Warhammer’s single player campaign is epic on a scale that we’ve yet to see from a Total War game.  Sure, previous Total War games have been amazing in their own rights, but with vying factions and Warhammer lore backing it all up, this world feels more alive than anything we’ve seen before.  Depending on who you choose, a campaign can play out quite differently.  Not only because of how different each faction is, but because of how the world is shaped, where you’ll be fighting from, objectives thrown at you as you progress, and major milestone battles that bring to life high fantasy war in ways that we’ve never seen in a video game , not at this scale at least.

Whichever faction you pick, your campaign will have some similarities though. The over-arching strategy layer in Total War: Warhammer is such that it makes you make decisions about how to best allocate your resources while you not only protect your interests, but advance to gain ground in the campaign.  Threats loom everywhere in Total War: Warhammer.  Whether it’s bordering factions, public order getting out of control, or mismanaged resources that leave you bleeding cash, there’s always something to manage in this game that keeps it quite interesting and having you make important decisions that can have serious impacts on your war efforts.  You’re not only a general that’s leading an army into battle, but a tactician that must allocate the right resources to the right places, shoring up holes in your borders with troops, buildings, or diplomatic measures like peace treaties.

This is Total War: Warhammer

You’re also managing armies.  Merging them, creating new leaders, forming new armies, and customizing your tech trees for these leader units known as lords and heroes so that you can take them into battle and lead your forces to victory. This is one of the most fun parts of Total War: Warhammer in that these hero units are much more powerful than the generals from previous Total War games and can turn the tide of a battle.  They can take on swarms of enemy units by themselves, buff nearby soldiers, or use any number of different powerful abilities that are unique to each, which you can assign to them as you see fit.  On that note, for Warhammer fans you’ll definitely recognize the Legendary Lords in this game as central figures in the Warhammer world.  Creative Assembly has certainly gone the extra mile to make things like this feel extremely authentic. 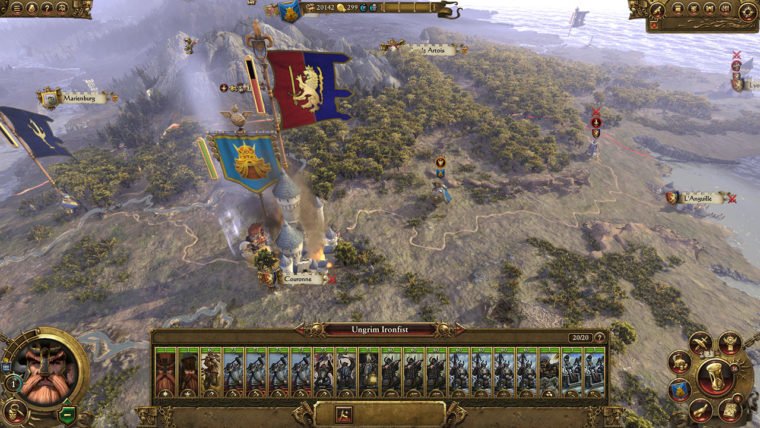 The massive scale battles in Total War: Warhammer are amazing.  Total War games have done these well in the past, it’s kind of the calling card for this series, but here they’re really special as the campaign gets rolling.   There as fun to watch as they are to play even if things can get a little chaotic at times.  Again, with the multiple factions and units for each, any campaign’s battles can play out differently as you have to learn to use not only the traditional units that we’ve seen in previous Total War games, but entirely new, fantastical creatures from the Warhammer lore.  This not only enhances the gameplay, but also the replayability for the title.  Battles are an incredible spectacle in this Total War game, and the AI bugs that plagued previous games don’t seem to be a huge issue in this release as they were in previous Total War games.  AI feels like it has had an overhaul as well, with enemies not simply being overrun, but using advanced tactics, fleeing battle, only returning to flank your forces instead of just hanging in there to get decimated. 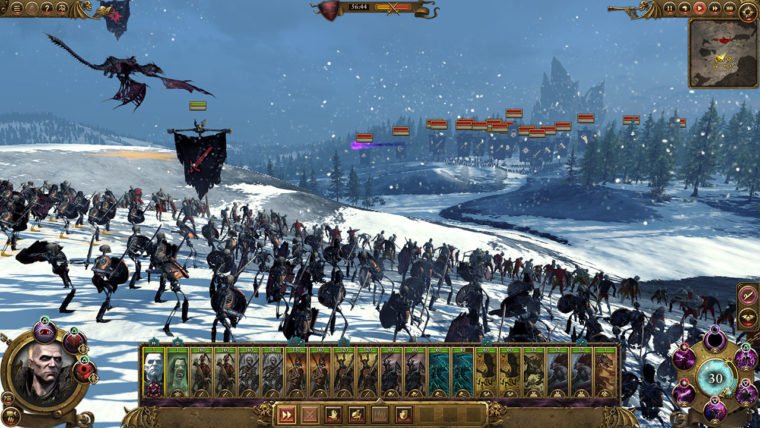 Total War: Warhammer is the most interesting, most polished, and most enjoyable Total War game to date. Depending on which camp you come from you may have a slight learning curve, but its definitely worth it as this game has plenty to sink your teeth into if you’re a fan of strategy, high-fantasy, or both.