Remake of the third Mana game. The SNES was filled with numerous classic RPGs, a large majority of which came from the two brands that merged later to become Square Enix. Secret of Mana has always been one of the more discussed games from that period, though most at the time did not realize it was actually the second game in the Seiken Densetsu series. A few gaming magazines also reported at the time about what was being referred to as Secret of Mana 2, aka Seiken Densetsu 3 in Japan, which was not ever brought to the West until the release of last year’s Collection of Mana as Trials of Mana. Square Enix wasn’t satisfied with just the localized release of the original in the collection though, as they decided to remake the entire game for current generation platforms while keeping the name Trials of Mana.

Longtime fans of Secret of Mana were happy to finally get their hands on Seiken Densetsu 3 last year in the Collection of Mana release, but it was hard not to be intrigued by the upcoming Trials of Mana remake at the time. Unlike the remake for Secret of Mana that was not very well received a few years ago, Trials of Mana immediately looked like a much more full scale remake. This starts with the visuals, which are much more modernized than the Secret of Mana one had. You should certainly not expect something on the level of say Final Fantasy VII Remake, but the visuals do look nice and colorful most of the time. There are some issues with textures loading late in some cutscenes and the character models can be a bit questionable at times, especially when it comes to characters such as Duran that carry a sword and have it slicing through his hair very unnaturally. Even with some of the problems, the game for the most part looks just like you would want a remake of Trials of Mana to look without a giant budget. 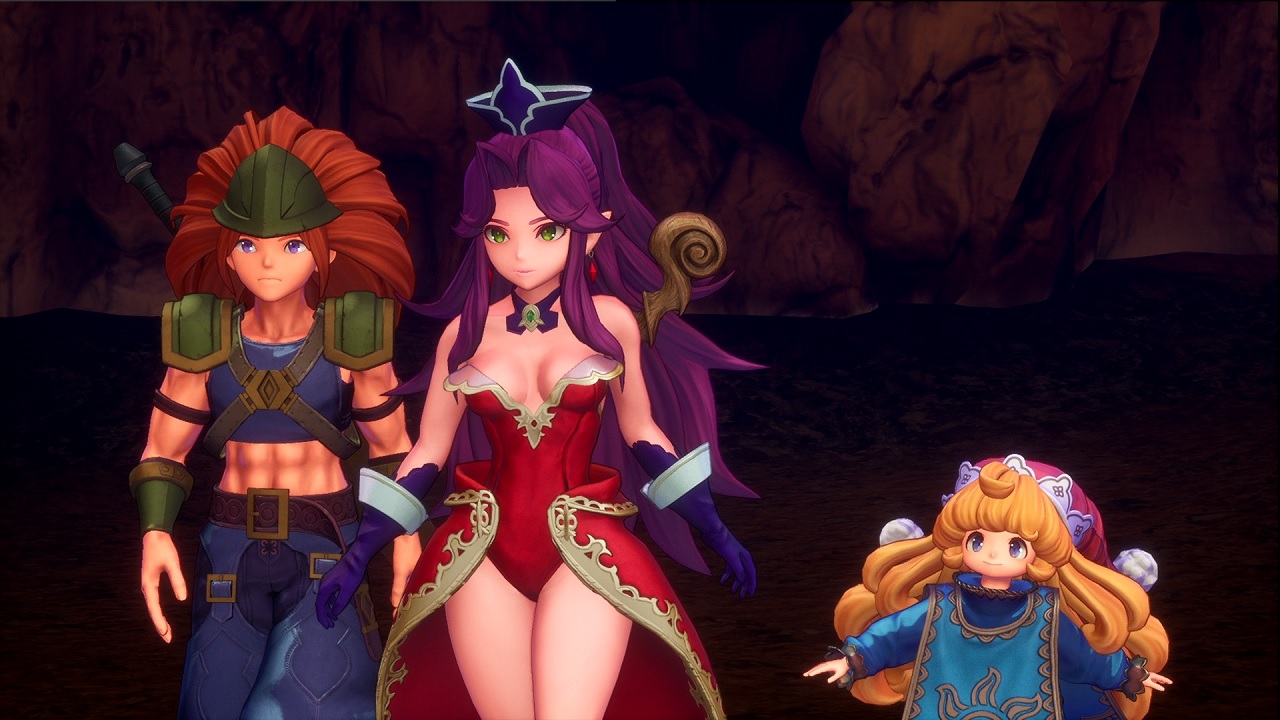 Not only did the game receive a visual upgrade, but Trials of Mana also received a remixed soundtrack as well. While the tracks will likely be brand new for most players, the music is quite enjoyable throughout the game. There is a good mix of different songs that help to set the atmosphere through the varying locations and moments. The voice acting on the other hand leaves a good bit to be desired, as it’s pretty mediocre overall. This also isn’t helped by some awkward dialogue at times either, so it might be more of the direction here than anything else.

Unlike Secret of Mana that had three playable characters, Square went double or nothing in the follow-up by increasing the number of possible playable characters to six. However, you do not actually get to rotate the six characters in and out of your party during the game, but rather have to make a choice at the very start. When you first start the game, you have to select a primary character and two secondary characters, with you instantly jumping to the beginning of your primary selection’s journey. For instance, Angela’s story starts off in the Kingdom of Altena, where her mother rules as the queen. She is nearly murdered by her mother under the influence of the Crimson Wizard, who also is a major antagonist in Duran’s opening story.

Each of the six main characters have their own backstory that would thrust them into the main narrative, where they can play an important or ancillary role. In the case of my first playthrough, I selected Duran, Angela, and Hawkeye, but also crossed paths with Charlotte, Reisz, and Kevin at different points. None of them actually join the party or even stay with the party at any point, which was pretty interesting. This was quite different from a game such as Final Fantasy VI, where you have a cast of characters that rotate throughout the game. This also makes it well worth playing through the game multiple times to get the full experience for each character. 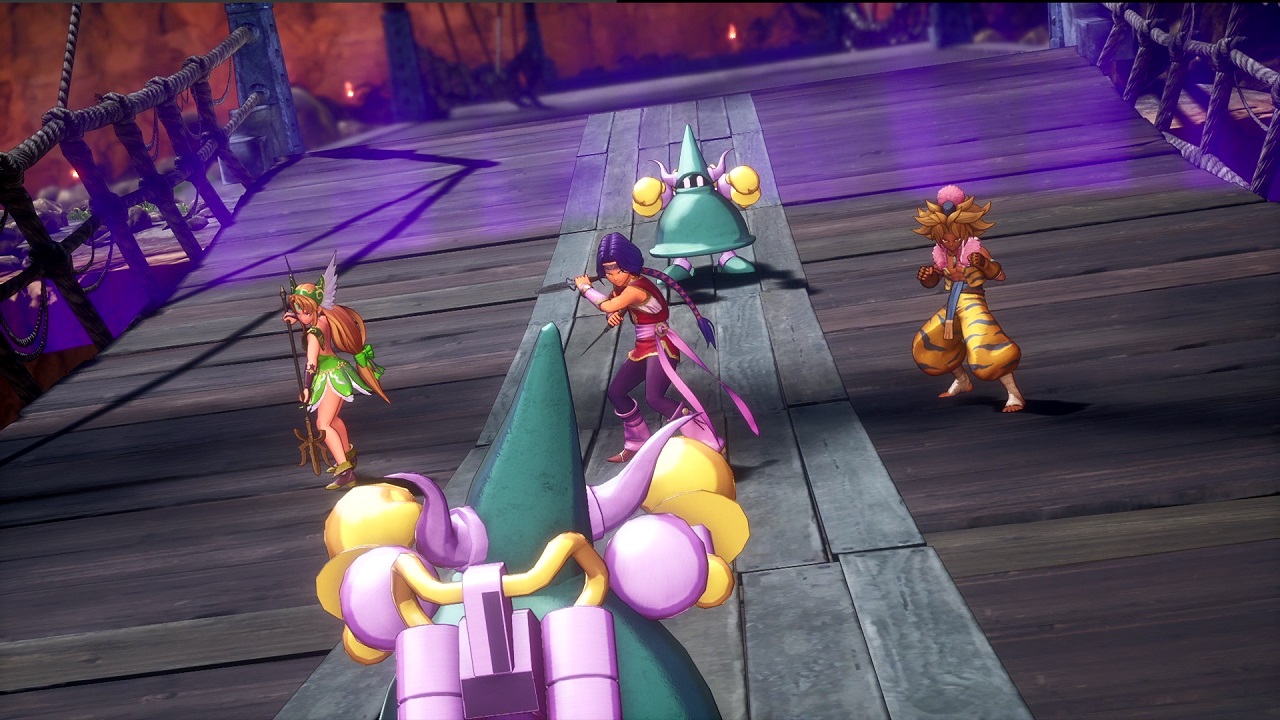 While that idea might seem tedious with six different characters, the game makes a wise choice by helping to flesh out the backstory of your two secondary characters you select via flashbacks. Once you come across each of the two secondary characters you select, you will get a quick blurb about who they are along with the option to actually go back and play through their opening. These sections are shorter than how long it took your choice main character to come across them in the game, but still giving you enough of their backstory to understand who they are and what they are trying to achieve in the game.

Well worth playing through the game multiple times

Even with the different character options, the overarching story in Trials of Mana remains the same. The basic premise is that there are multiple factions involved that are trying to obtain the power of Mana as the power within the Mana Stones start to wain and are vulnerable. Your three chosen characters end up intersecting on the way to or within the holy city of Wendel, with everyone having their own reason for making it there. Your primary character will end up running into a Faerie from the Mana Sanctuary that needs a human host to continue outside of the Faerie realm. From there, you must go in search of the Mana Sword and beyond as you try to save the world from the evil factions and the monsterous Benevodons that get unleashed. The story is quite enjoyable throughout, though the party structure definitely does hinder the game from being as emotionally impactful as some others of its time. 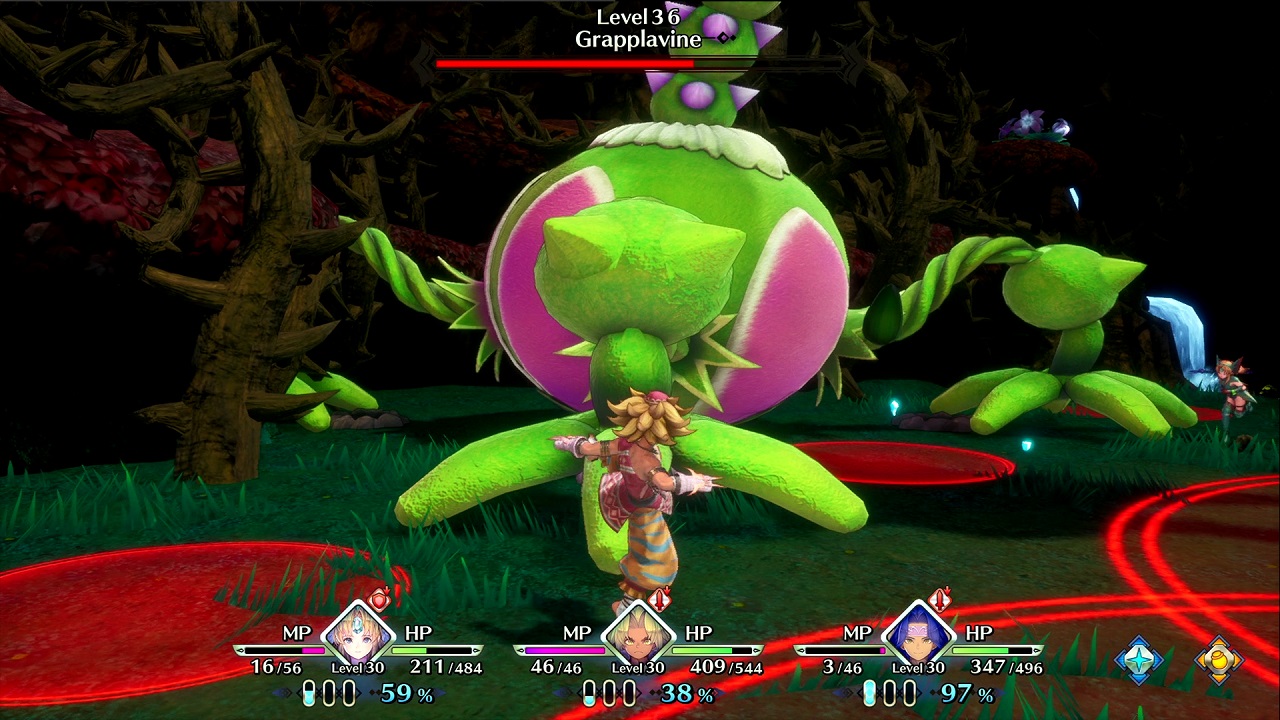 The Super Nintendo definitely had its limitations in scale back in the day, which often meant the reuse of many areas of the map. Trials of Mana definitely does this and struggles with it a good bit for the first half of the game. This first half feels very linear and it feels frustrating to go back and forth between the same few towns and locations over and over. Thankfully, this does open up a good bit after you gain access to the equivalent of a ship and even later an airship in the game, which helps with the pacing and scale overall of the game’s world.

Many people may be expecting a turn based gameplay style from an SNES RPG, but the Mana series is more action oriented and Trials of Mana is no different. As you walk around the different environments found in the game, you will come across groups of enemies scattered throughout the land. Once seen, you can get right into the action by attacking with A on Nintendo Switch for a basic attack or X for a heavy attack. B allows you to jump and Y allows you to dodge out of the way, both of which can be important in battle. Magic and items can be accessed with the D-Pad, as long as you have them set to the ring that you can use in battle. On top of that, you also can use the bumpers to activate certain special attacks and any shortcuts you set. You are not stuck with just your primary character either, as you can switch to either of your other two characters at anytime in battle with a simple button press. What can be annoying though is that you almost feel like you have to switch to them sometimes to avoid major attacks, as the AI for them is not the best.

What does help to keep the battle system fresh in the game is the class system, which allows you to upgrade your character to additional classes beyond their starting point. Just like the original, you will be able to upgrade to a stronger class once you reach a certain level, as well as later upgrading to a third tier as well. These each have a light and dark path as well, offering you some options on how you want to handle each character. New in the Trials of Mana remake is a fourth tier that doesn’t become available until after you beat the game. The different classes do feel like they could have been a little more distinct from one another, but it is nice to have the branching character paths available. 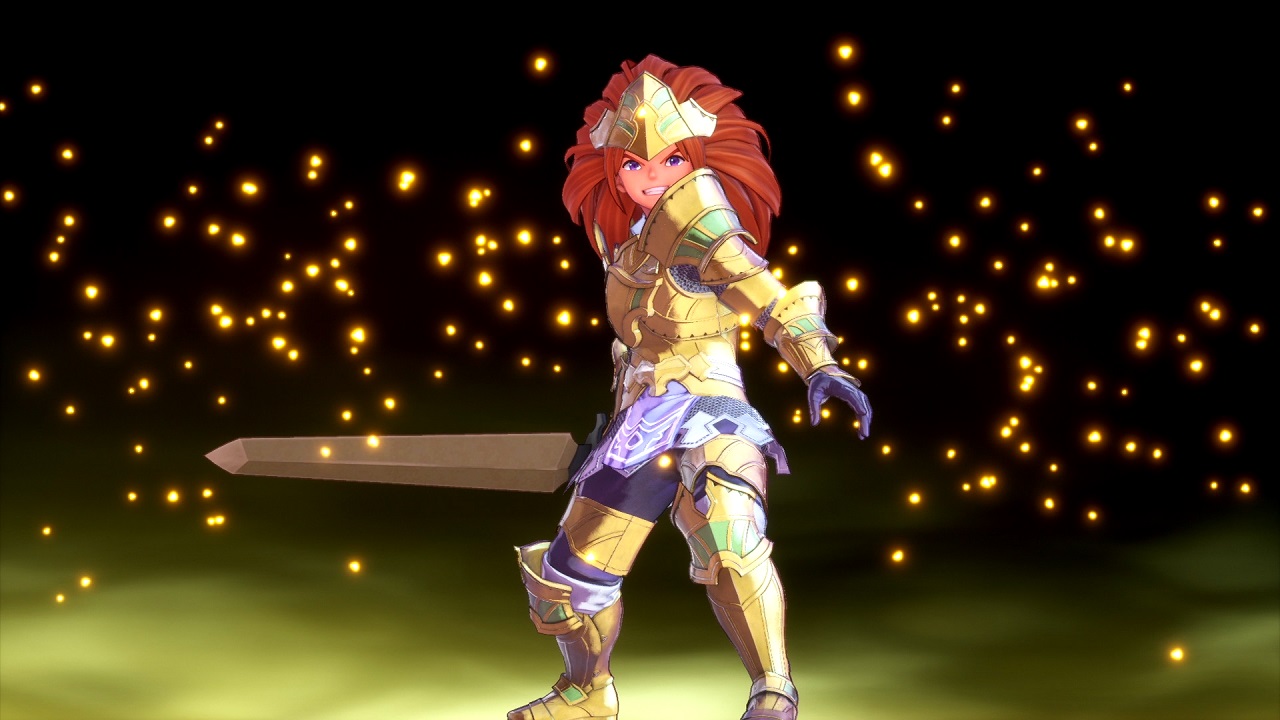 Considering that the battle system is pretty simplistic and remains true to what it was in the original, you would think the game’s performance would be pretty solid on a current generation platform. The good news is that Trials of Mana typically runs quite well, though there are certainly a lot of loading screens that can get pretty frustrating after awhile. The action based battle system also performs well for the most part, with the only hiccups ever coming when there are four or more enemies on screen that cause the frame rate to drop a bit. This is not an every time occurrence either, so it’s not really too much of a problem.

Trials of Mana is a very respectful remake from top to bottom, offering players upgraded visuals alongside a familiar battle system. The SNES roots do start to hold the game back in some areas though, such as the map structure and overuse of the same locations. Purists may want to go back and play the localized 16-bit version as part of Collection of Mana instead, but the remade Trials of Mana is a more than acceptable option that is probably the most approachable for a general audience today.

While it may be a little too beholden to its SNES era roots in some ways, Trials of Mana is a solid remake that offers players an alternative way to experience what was not too long ago a Japanese exclusive game.