El Presidente is back once again to rule over his island nation. 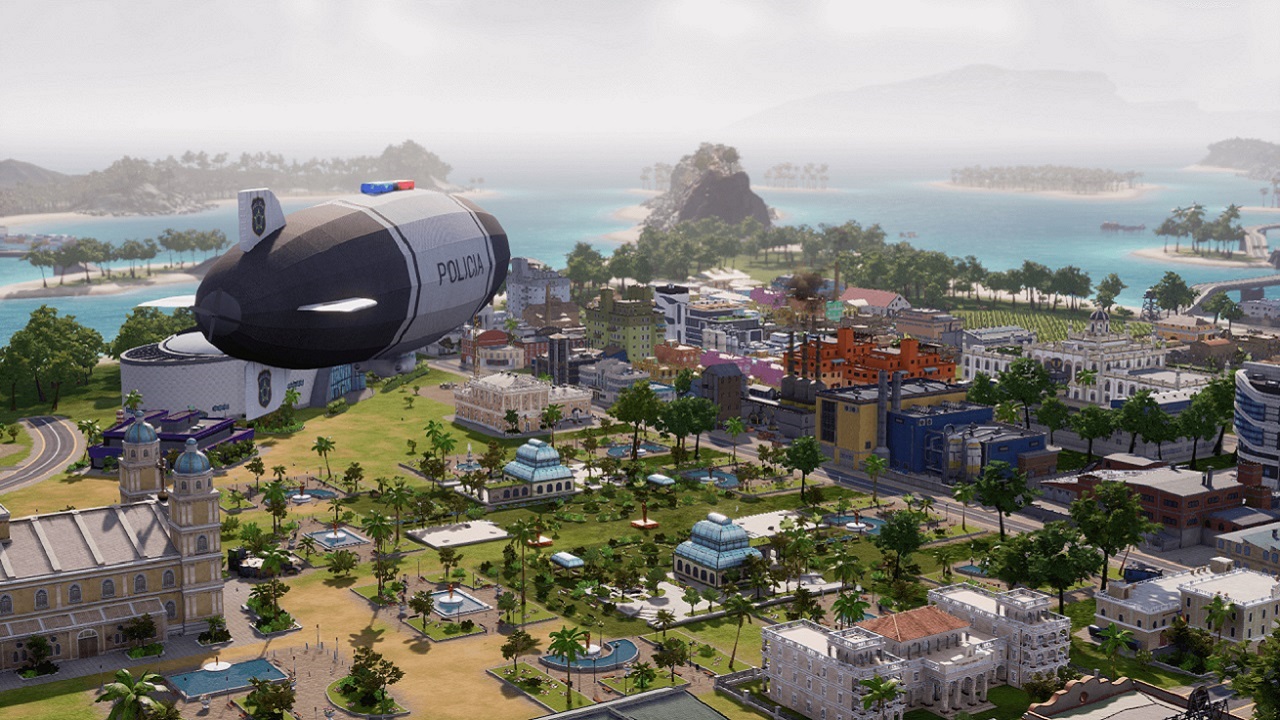 Tropico 6 is the latest installment in the long running cult classic series about being a dictator in a banana republic. El Presidente is back once again to rule over his island nation. The main game is comprised of three separate parts. The Missions, shorter games with specific win conditions or tailored gameplay to focus on solving the Missions puzzle. The Sandbox, is a totally customizable long form game. In Sandbox you can play through the entire game without worrying about specific limitations or goals that the Missions have you focus on. Last is Multiplayer, where you can take your dictatorial skills against other players.

A typical game of Tropico starts with your Palace, a few buildings for construction, delivery, and a handful of residential buildings. From there it’s up to you to start growing. There are 4 major eras you play in Colonial, World Wars, Cold War, and Modern. The Era you play in will give you different buildings, and ways of acquiring resources, so as you are starting a game make sure you are aware of what the era you are playing in can provide for you. Regardless of Era you’ll want to make money, the best way to start is by exporting goods. you’ll start with raw unrefined resources but don’t rely on those as a staple, you’ll eventually want to start exporting more advanced things. As your town grows so will your population. You’ll start having to manage their happiness There are 8 different happiness’s that will need to be monitored. In addition to the happiness of your population you’ll also have to curry the favor of the political parties. Depending on the Era there will be a certain number of political parties that you’ll have to pay attention to. Certain buildings or edicts can raise a parties favor, but the main thing you’ll have to do for them is answer demands. These will usually be something like build a certain building, or gather so much of one resource. upon completing a demand you’ll be rewarded with a choice between money or favor. Starting out it’s almost always better to get the favor. The combination of happiness and political favor is how you gain support. Support is what you need to win. Every 10 years or so an election will be called. At the beginning of the election season you’ll give a speech to your citizens. Giving a speech can temporarily gain support, and if you are close, but don’t have quite enough support you can rig the elections. Ultimately there is a lot to pay attention to here. Between the politics, the population happiness, and the economy it can get a bit hectic. You really need to pace yourself, if you expand too quickly you’ll overreach and not be able to keep up with the growth, but if you act too slowly your citizens and political parties will become unhappy with the way you are running the country. It’s about striking the perfect balance. There are so many little nuances of the game that it can be hard to keep track of everything. When you’re doing well it feels great. You feel like a strategic mastermind, controlling your nation, and manipulating the political landscape with ease. However, when things start to take a turn for the worse it’s difficult to decipher which part of the system is failing. The charts and data they give you isn’t very intuitive. The harder part is attempts to fix it can make things worse if those fixes weren’t exactly what needed to be done. One struggling area can easily cause the others to tank as well.

If the game had a main progression it would be through the missions. Missions are unlocked in sets. You only need to play a few in each set to unlock the next. So if there is one that is particularly troubling for you, move on to the next to see if it’s any easier. The first few are meant to get you used to different aspects of the game while providing an interesting challenge. However, once you start to get into even the intermediate range of missions they can get quite difficult. There is a lot the game wants you to keep track of, and if you don’t tend to the standard challenges that arise through game play and the specific puzzles of the mission, it’s easy to get overwhelmed. An example of this is the Tropicoland Mission. This is all about trying to gain tourists. Tourist buildings are expensive and don’t offer much to your actual citizens. It’s really easy to get into mindset of building tourist attractions and leaving your citizens lacking of essential things for their own happiness. This can lead to low support, and a quick loss of money.

Once you have a good understanding of the core mechanics the missions can be a fun endeavor to try and make the game different by adding additional puzzles, but in the end it’s the same game and the shortcomings are only exaggerated in the Missions. There really aren’t many ways to recover from a failing position, and those there are are temporary and come with a high price. When you’re doing well it’s easy to do better, when you’re doing poorly it’s easy to do worse. The game is mostly about trying to get your nation off on the right foot and go from there. Although, sometimes it is fun to just play as a failing Nation State. It may be frustrating, but sometimes the best course of action is to start a game over. Take things slow and steady. Have some patience as your numbers climb. Don’t blow through all your money and favor right away. 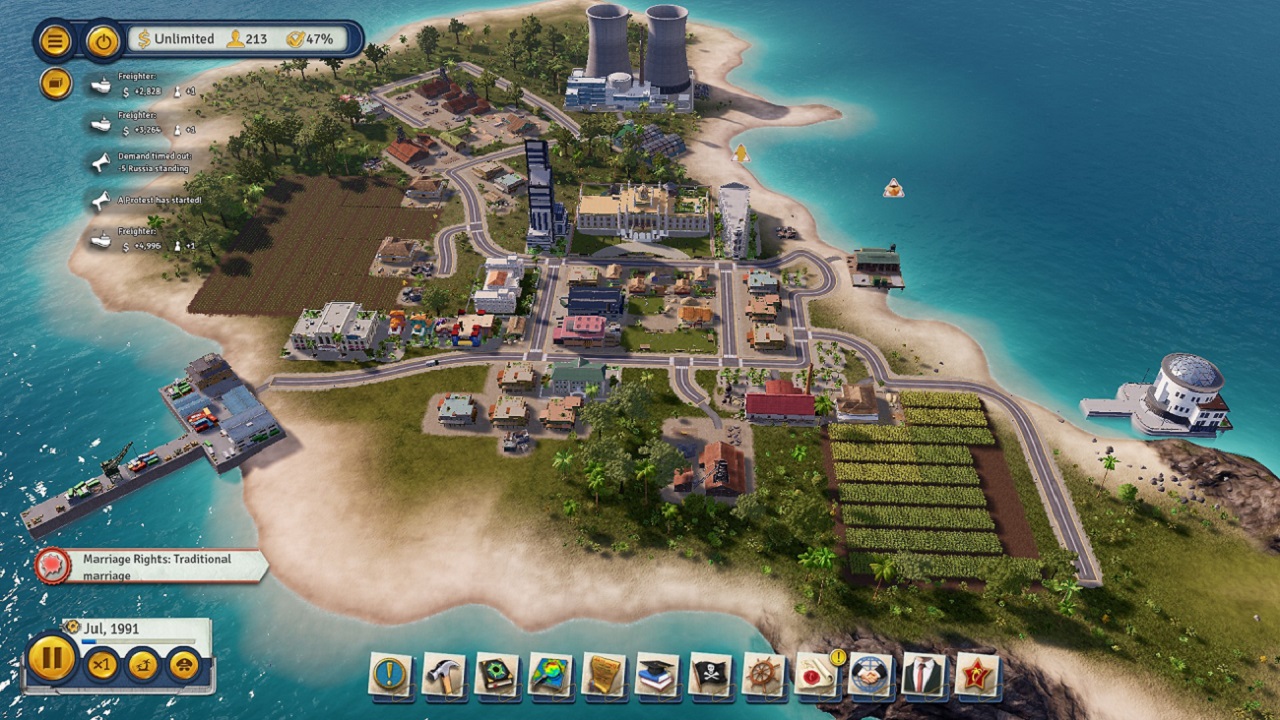 Tropico can be a blast to play. The humor is great and the art style is fantastic. It does a great job of blending serious subject matter with humor and a cartoonish setting. The game play is robust and difficult. Although some of the player information tools are not user friendly, especially for new players, there is a lot here to really sink your teeth into. The learning curve will be a bit steep, and failing games will just be frustrating but once you figure it out there is a lot to love here.