A lot has changed in the real world of Ultimate Fighting since the last UFC game was released.  Back in 2018, Conor Mcgregor was at the height of his fame.  Holding two championship belts, the Irishman graced the cover of a decent effort from EA Sports.  That launch marked the third game in the series and milestone as it was a big improvement over the previous game.  While the landscape of the UFC may have changed with new fighters stepping into the spotlight, it’s time to see what those two years of labor from Electronic Arts have brought us to the digital octagon.  The truth is, there’s not one thing that’s really going to blow you away from game to game.  On one hand, UFC 4 is a better game than its predecessor.  The developers have scrapped bad modes and replaced them with fun ones.  The core gameplay has been made more intuitive and approachable, while remaining challenging and deep for long-time fans.  On the other, it doesn’t feel like a huge leap from the previous game.  So this review is going to be somewhat similar to our review for UFC 3 as the overall improvements are marginal, with the major differences between the games being tweaks to existing modes, or introductions of minor ones.  So long as you keep those expectations in-line with what you’d find in a yearly sports release you’ll find EA’s best offering yet in the UFC series. 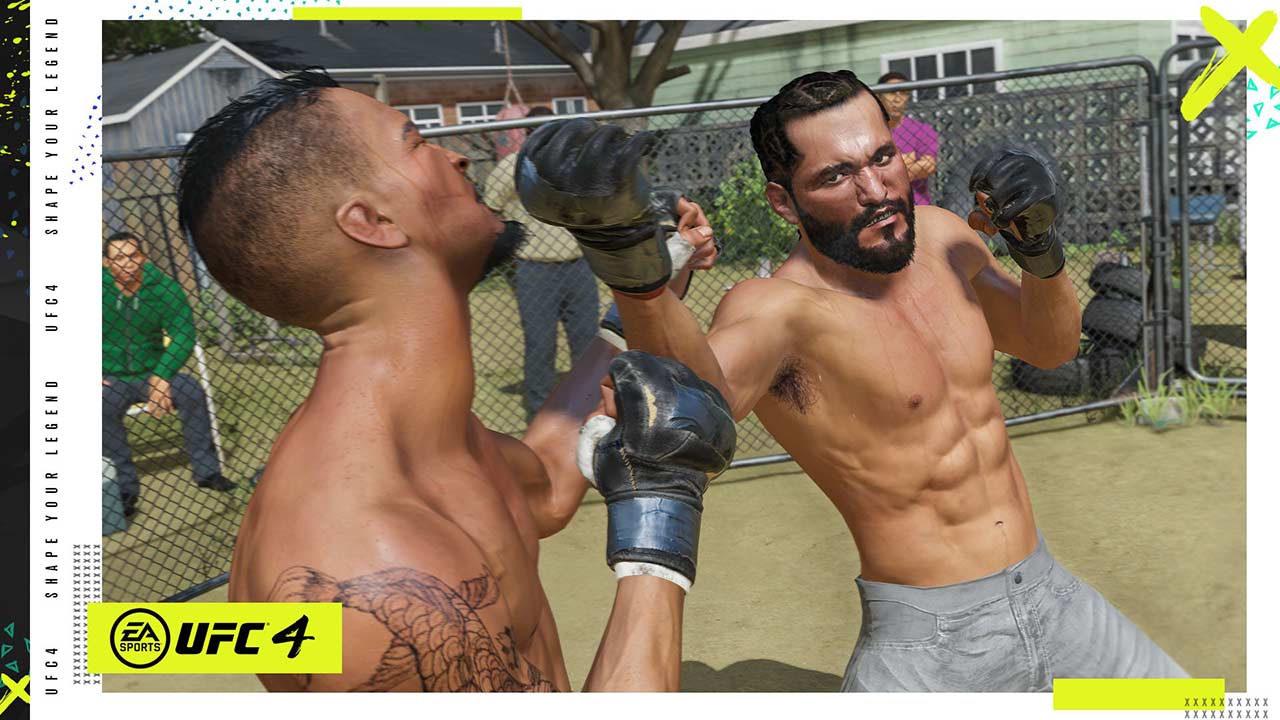 EA has a knack for getting these exclusive rights to popular sports franchises.  Having the ability to do a licensed UFC game is huge for Electronic Arts.  A sport that continues to grow and mature has supplanted boxing as the premiere combat sport to watch.. and play.  Unlike boxing, mixed martial arts is an incredibly complex business.  There are many styles and techniques to master, and like its predecessors, UFC 4 doesn’t shy away from integrating some of the more complex aspects of the sport into this game.  It’s a gift and a curse for EA, but they did manage to come up with some decent systems to simplify things and they’ve added a huge tutorial, training manual, and practice mode.

What’s Been Added and How Does it Feel 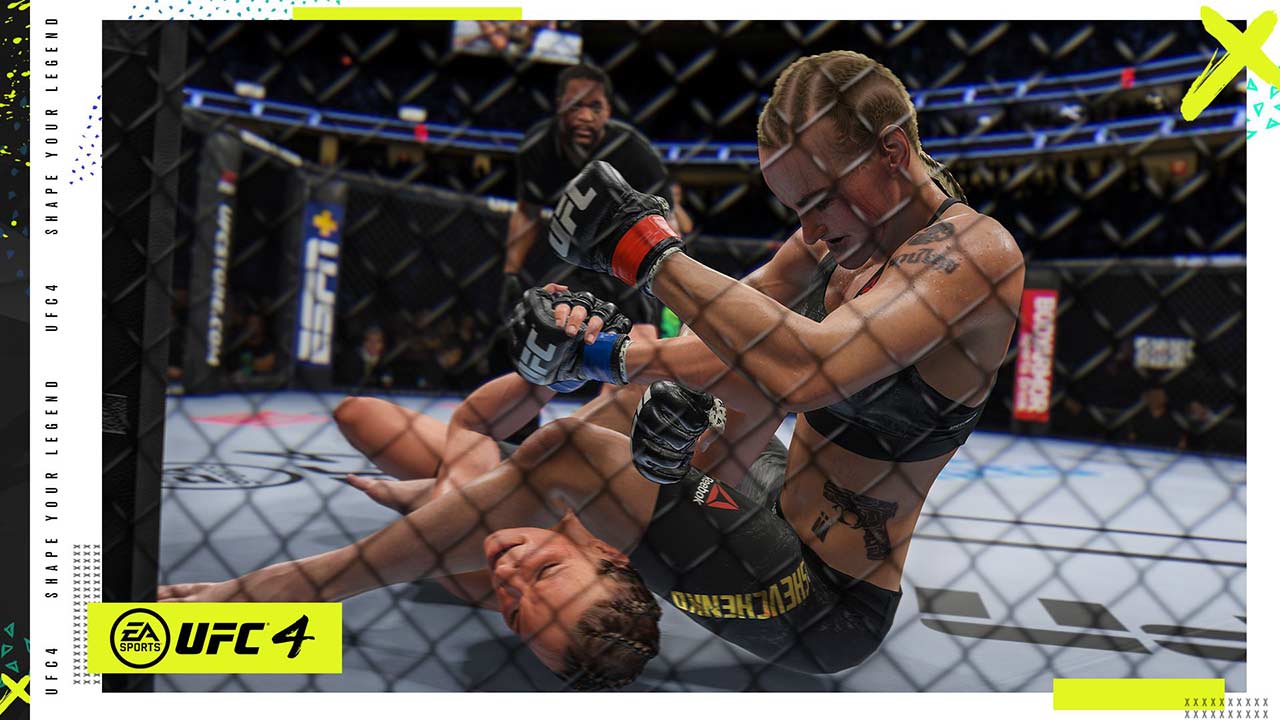 In the cage, there have been some things that EA says have been refined, but the results are mixed.  Clinches have been refined with what EA calls “Fluid Clinch Control,” but I saw plenty of times where it didn’t look too fluid at all and it certainly didn’t feel like it was under control in terms of the physics of the game.  Like the new clinch animations, ground and pound is advertised as “devastating” this year but it really doesn’t live up to that hype.  The game is also supposed to be very focused on the created fighter, and while there is more gear than ever before to outfit your fighter with, the actual customization is a little lacking.  In that you can’t truly customize your character down to the nitty gritty details that those that are  truly invested in the character would like to have.  This includes needing to choose from preset fighting abilities, fighting styles, and limited presets for your actual outward appearance.  While there are some sculpting options I just moved with a preset as it seemed like what I was trying to make just wasn’t possible.  EA should definitely go towards a smartphone picture that maps to the game avatar like we see in 2K.

There’s plenty more that’s been added here. Submissions have been overhauled, and I do enjoy the new mini-games over the ones in UFC 3.  It’s a little bit more intuitive in UFC 4 than it was in the last game.  Plus there just feels like there are more ways to interact while in the submission portion of the game, this includes the ability to strike or try different moves to escape.  Striking does still feel good and for those who enjoy this aspect of the game, you may be pretty happy out of the gate.  While some punches feel light and less heavy than the last game, it might be because tapping and holding the strike buttons executes different types of punches.  Whether that’s tapping for fast hits or holding for more brutal damaging shot. 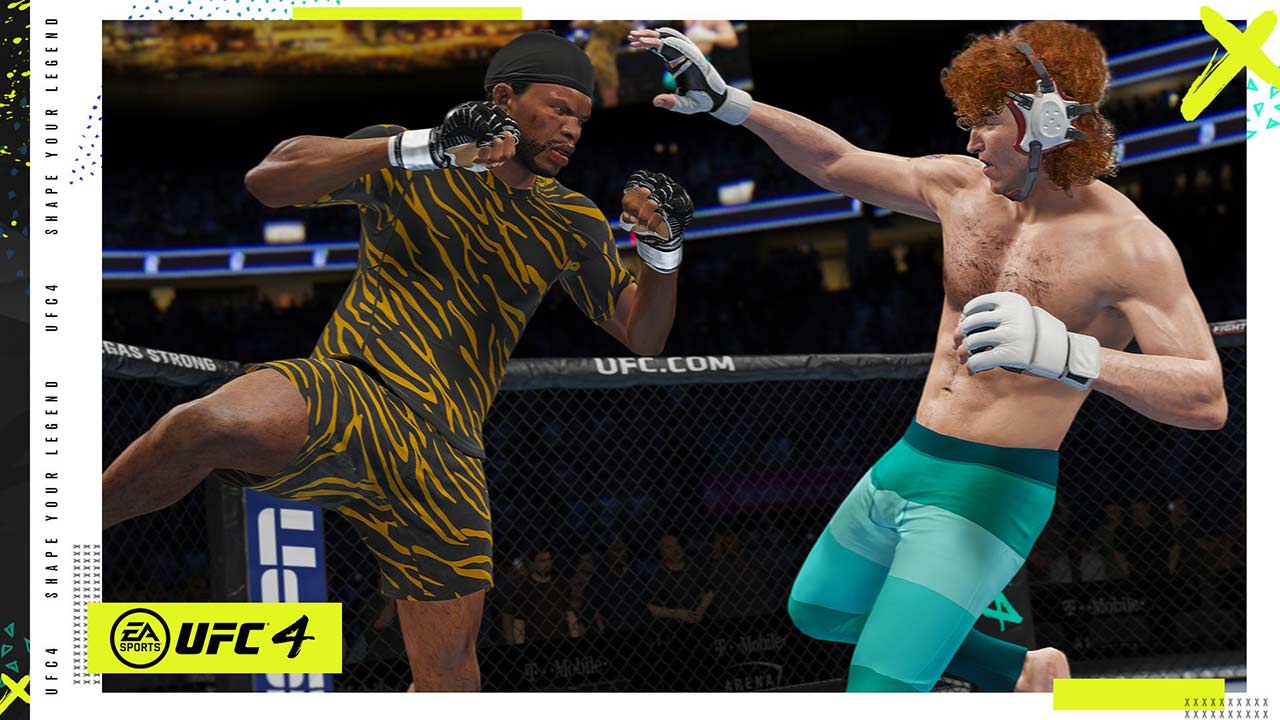 It Walks the Walk, but the talk has changed

For me, watching a UFC fight is associated with listening to Joe Rogan’s commentary on it.  He ads a level of excitement to the fights, that the new commentators don’t.  Instead, you’ll have to settle for Daniel Cormier and John Anik.  It’s not a bad experience and still wholly authentic, but just not what I’m personally used to.  Perhaps some people will say good riddance to Rogan, but not for me.  The other presentation aspects of the game are still as amazing as ever.  UFC 4 is a fantastic looking fighting game.  The fighters look incredibly lifelike, the arenas beautiful, and there’s also some brand new, incredibly different fighting areas to enjoy.  Tack on a banging soundtrack for varied musical tastes as well as a clean UI that’s easy to navigate and get to the modes that you want to play and you’ve got something that’s fun and easy to interact with.

If you’re familiar with last year’s game you’re going to notice that the Ultimate Team mode  that was in UFC 3 has been scrapped in UFC 4.  It’s probably for the better the mode wasn’t very good.  I did call for EA to give more love to the other sections of the game in my review of UFC 3.  Did they do that in UFC 4?  I think they did.  The changes might be lateral moves in most cases, but a more intuitive grappling and submission system just give the game a more fluid feel.  UFC 4 is certainly more pick up and play friendly for players of all skill levels though.  Like other good fighting games, there a window of accessibility for new players and good bit of depth for experienced fighters.

So if Ultimate Team isn’t the focus what is?

There’s quite a bit to do in UFC 4 without Ultimate Team.  You’ve got a more robust career mode and the ability to create multiple characters and take them on the journey from amateur to pro.  This includes building up that character, completely customizing them to your liking and fighting progressively harder fighters, ultimately making your way to the UFC.   I think that career mode is probably going to be the biggest draw for many players who skew towards the single player side of the game.  On the contrary, those who like online competition will likely get the most out of the game though.  There are plenty of online modes to sink your teeth into here.  Whether you’re into climbing the ranks of the Online World Championships, participating in the new, shorter, Blitz Battles, or just fighting a quick fight against an online opponent or inviting a friend to a match you’ve got numerous ways to scratch your competitive itch.

There’s an equal amount of content for the local fighter or offline player too.  It’s a great place to practice the game, with numerous practice modes and learning tools that’ll help you get proficient with UFC 4.  You can also create tournaments or UFC events with the fight cards, venues, and rules of your choosing.  Even the offline modes designed to be played against the AI or your local friends have some diversity.  The Fight Now option has some customization allowing to pick fighters, rules, and venues as you see fit.  But there’s something for people who want to just throw the fists with the Stand and Bang mode.  Then there’s a knockout mode as well that focuses on things like punches, kicks, knees, and elbows.  While these three are the most prominent and developer created mods of the standard rules fighting, there’s also a custom fight now mode where you can further tailor things to your liking.

While it would be easy to say that some of the new content is throwaway and  non-worthwhile.  The new fighting arenas are actually pretty cool for any type of fight.  The Kumite mode resembles something inspired by the Bloodsport movie of the 80’s with a touch of Mortal Kombat sprinkled in.  While the backyard looks every bit the part of an underground fight channel, something that you’d find in the depths of YouTube.  Both add some diversity to the fighting in case you ever wanted to have the dream fight in the backyard with two rival fighters.

UFC 4 feels like it will once again have the power to pull players along for another two years, with a good bit of content and great gameplay.  However, it is starting to feel like another one of these in two years is going to be a miss for EA. UFC 5 will likely need a little bit more innovation in either the visual or in the physics and fighting itself to truly impress the next time around.   Unfortunately, without much competition in the space it’s hard to tell if that’ll happen. UFC 4 isn’t a perfect game, but it’s hard to imagine anyone coming along and doing it better.  At the heights of the Fight Night series, EA had a great franchise that was fun to play.  They’re getting there with UFC, it’s just taking longer than expected.

UFC 4 is a better game than UFC 3.  While some of the systems might take a little bit of getting used to, there’s a more refined experience here.  One that’s a little bit more welcoming to many different types of players and that’s been done without sacrificing the level of depth and quality to the fighting that fans have come to expect from the series.