The latest news in the world of video games at Attack of the Fanboy
Updated July 13th, 2021, by Bill Hess 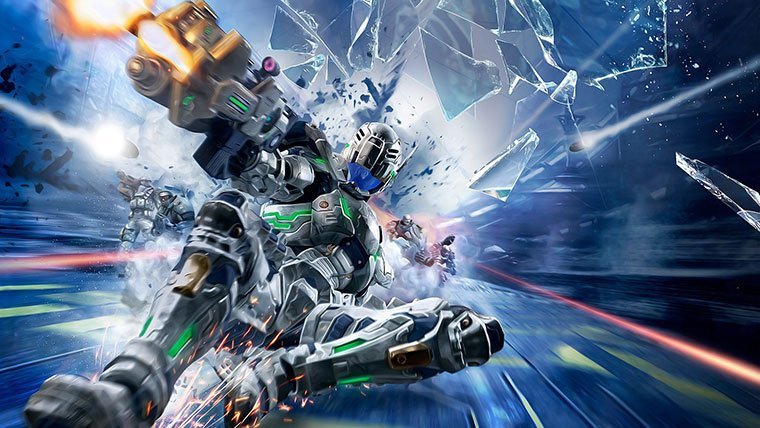 Directed by Shinji Mikami, VANQUISH is a sci-fi shooter of epic proportions with a fast, fluid and frenetic combat system, and an engaging and immersive storyline. Players take the role of Sam, a government agent kitted out with a futuristic battle suit, in a near future world where nations war over the planet’s remaining energy resources. A versatile fighter with a huge arsenal of weaponry at his disposal, Sam also has an array of martial arts skills that he can use to take down his robot enemies.

If the team at Platinum Games set out to make one of the most hectic and fast paced cover shooters to ever grace a console while retaining a level of beauty found in hardly any other games, I would say that mission was complete.  Vanquish is a breathtaking game at times and one that takes some cues from the highly popular Gears of War.  But it would be a bad comparison to compare Vanquish to Gears of War.  It would be more like Gears of War on crystal meth and an 8 ball of coke.  Vanquish is fast paced to say the least.  It’s got a lot of moving parts that come together exceptionally well on the gameplay front.  Aside from the sheer amount of action going on-screen in the macro sense: enemies, bullets, explosions, and background fodder, the game also has a ton of micro elements that look equally well to deliver a great overall package in the graphics department.

The graphics go hand in hand with the excellent game mechanics in Vanquish.  The cover system will have your hero hiding behind destructible environments against hordes of grunt type enemies with the occassional boss or vehicle thrown in for good measure.  Your character, Sam Gideon, is armed with the ARS suit which stands for Augmented Reaction Suit.  The ARS suit is kind of the star of the show, as it allows Sam to jet from place to place throughout the map moving from cover to cover.  It also gives you the ability to slow down time giving you a leg up on the enemies and enabling you to pull off some pretty slick moves from time to time.

There are some pretty amazing set pieces in Vanquish.  Fighting bigger than life robots and vehicles has it’s moments and the sense of scale in Vanquish is awesome.  Giant robots and 1000ft.  death ships take up what seems like 10 screens and the action can be downright intense.  Sliding in an out of cover while trying to sniff out weak spots is a good combination of challenging and fun and the big baddies are peppered in nicely throughout the game.

Also liked about the campaign is that it’s broken into bite sized morsels.  Got five or ten minutes to play games, you might be able to crack two levels out in that time.  And Vanquish will reward you for doing so.  In fact Vanquish will reward you for alot of things.  Killing enemies with style, staying behind cover, reviving fallen squadmates, and finishing under certain times will have you retrying levels to better your overall score.

Powering up weapons and expanding ammunition capacity is one of your objectives as well in Vanquish, defeating more powerful enemies will drop powerup cubes which will increase the weapon’s attributes.  This system works fairly well, but the only real changes I felt were in the ammo capacity.  Weapons never really felt any better or worse after modifications. Aside from the rocket launcher lock on speed.

Time slowdown is also delivered in one of the best ways I have ever seen.  Bullets and explosions will slow down exponentially and whiz past your head when activated and I couldn’t help but imagine how badass this game would be in 3D.

The combat in Vanquish is awesome and so are the graphics, but there is a shortage on variety in the game.  There are a few variations of enemies but for the most part you are fighting the same things throughout the whole campaign. There is some variation, but even the large bosses are reused multiple times throughout the game.  I would have loved to see added variance in what was being thrown at you and it truly seemed as if the enemies at the beginning of the game were the same difficulty as they were at the end.  If you don’t spice the combat up yourself by taking advantage of the ARS suit the game can grow a tad boring with the same pop up and shoot tactics found in most other cover based shooters.  This is not to say that enemies will never take you out of cover, but for the most part you will be using cover for the majority of your kills.

With like there is dislike and as much as I liked the bite sized level design, I disliked the crappy cutscenes in each small portion.  There was alot going on in Vanquish that is never really fleshed out.  A bigger and broader over story that could have made the game really engrossing for example.  For some reason Platinum uses a bunch of cutscenes to tell you little about the story.  I didn’t even realize that I was on a space colony until three quarters through the game and that was pretty unacceptable.  I wondered if I had just missed something, so I went back and while it made more sense the second time through, the story telling was a little lackluster.

Furthermore, it goes big at the end.  The result is something that feels less serious and more silly than anything.  I mean come on, the guy just tried to kill you and your response is “no, we’re leaving together” Bah!

After Bayonetta, Platinum Games had some big shoes to fill in 2010.  The combat while great, doesn’t quite reach that level of rhythmic satisfaction that Bayonetta does. ( was that dirty?)  Vanquish is a game that just isn’t as good as the sum of it’s parts.  The non-existent story cancels out the exceptional elements of the game.  Then when you tally it all up and realize you just beat the game in 5 hours it’s hard to justify the $60 price tag.  Vanquish could have stood on it’s own without the incorporation of  a story at all but the insistence to cram it down your throat made it a meal I would have rather skipped.  The bottom line was that the game had these action packed set pieces but everything in between was boring.  Even with the levels lasting only a couple of minutes there was still this down time that was not filled with anything worthwhile.  It could have been put to better use, but it wasn’t.

Vanquish was in the traditional sense, an arcade game.  It looked like one and played like one, the only problem is the developers tried to also make it something that it was not.  The incorporation of the asinine story and inability to actually convey said story throughout the game made Vanquish a bit confusing.  Forgetting about all that was supposedly going on and focusing on just the action at hand Vanquish is pretty damn good.  The visuals are amazing, the combat was good but not great, and the action fast paced and hectic.  But one thought just kept going on in my head while I was playing this game, and that was ” I could have just played the demo and had the same experience”  there wasn’t much more to it.  For someone that could care less about the story and just wants to kick ass and score points Vanquish is one of the best out there you should buy it. As far as myself, I got bored, and was glad when it was over.  This is never a good sign in games for me.