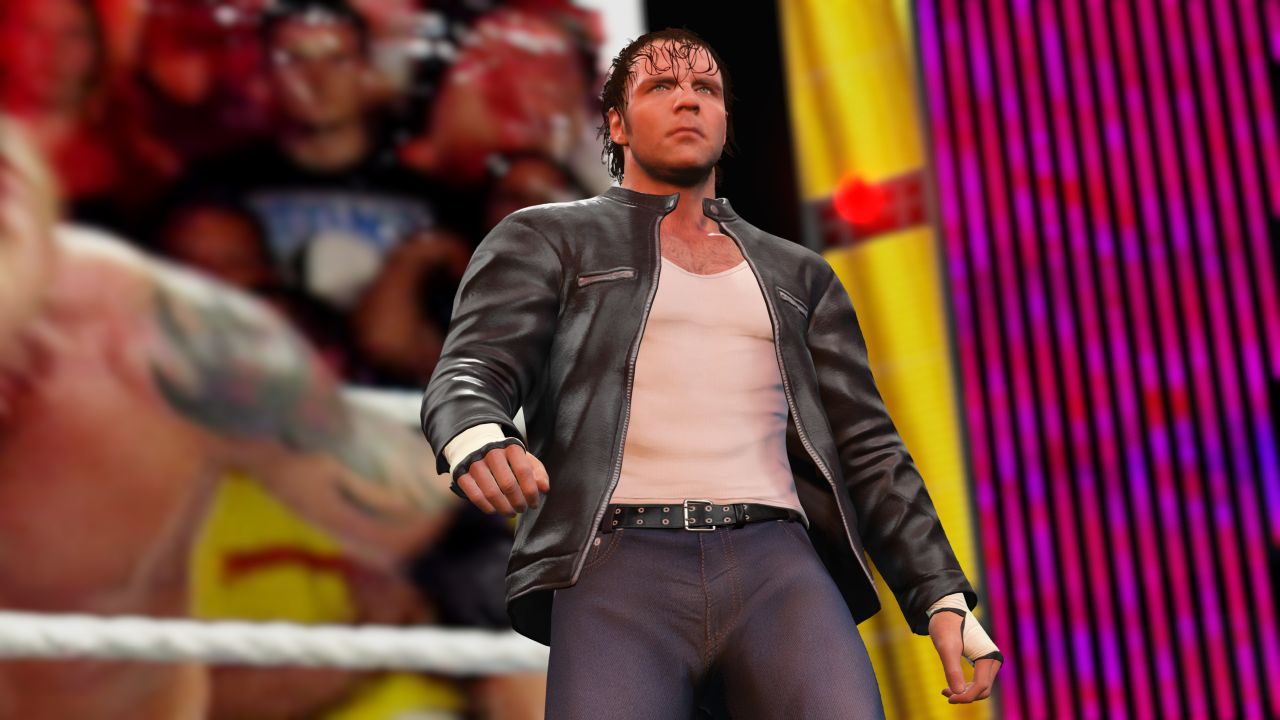 Last year saw the release of WWE 2K15 which was arguably one of the most disappointing games of 2014. Even though the franchise was debuting on the newer PS4 and Xbox One consoles, the game cut a lot of features that were present in the older PS3/Xbox 360 games. The game irked many people from the WWE video games community.

To right the wrongs of last year’s game, 2K Games went back to the drawing board and has listened to all of the feedback. With WWE 2K16, many of the features that were removed have now come back. The game also boasts the largest roster in franchise history. However, there are still some niggling things that make it are far from perfect.

Starting off with the good things first, WWE 2K16 has improved graphics from WWE 2K15. Thanks to the same graphics engine that powers the NBA 2K series, this game has the best visuals ever seen in a professional wrestling video game before.

WWE 2K15’s graphics were already impressive, but WWE 2K16 takes things a step further. Subtle things have been added to make the graphics appear more realistic as the developer has now added more sweat and perspiration on wrestler’s bodies. Even things like Stone Cold’s jacket move around when he fights.

Even though the overall graphics look good, not every character model looks perfect. The new graphics engine still has a slight problem with people with long straight hair. Long straight hair still looks a little false compared to all of the other hairstyles. Not to mention WWE interviewer, Renee Young, looks pretty bad in this game…

As a whole, the visuals still look good but what about the gameplay? WWE 2K16 still retains many of the gameplay physics and mechanics from WWE 2K15, although a few new things have been added to try and make things easier for beginners to play.

For example, pinfalls are easier to kick out of now. Before, players had to hold down the A button (X on PS4) and release it at the right time to kick out. Now, all that is required to do is just tap A (X) at the right time. Veterans may have a hard time getting used to this, but it’s an easier system than before. 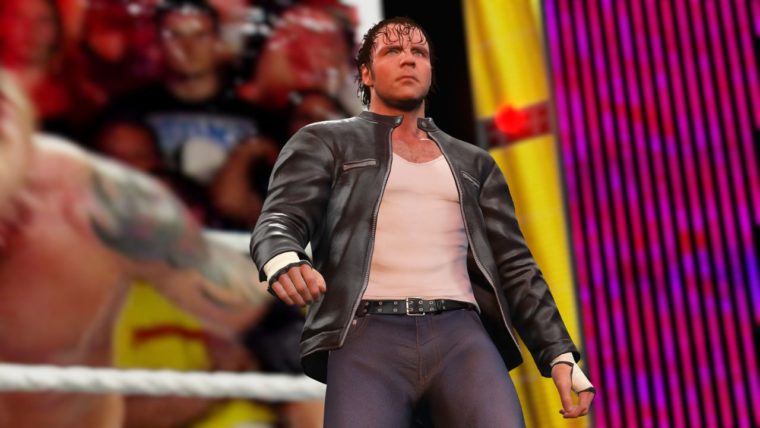 Another small change is that a new submission system has been added. Instead of mashing buttons like crazy, the game adopts a similar mechanic that was present in UFC Undisputed 3. To make an opponent submit, players will have to rotate the analog stick so that their red color matches over the blue color or vice versa. To escape, players have to do the opposite and stay away from the other player’s color altogether. Players may have to practice this new feature as it can be hard to do the first time you experience it.

The gameplay is serviceable, but again is far from perfect. An annoying thing that crosses over from WWE 2K15 is that it’s rare to end matches without using a finisher or signature move. Even if players have beaten their opponents to a bloody pulp, any ordinary move won’t be able to end the match. They require players to always use either a finisher or signature move.

This can be a pain in the neck when playing in the MyCareer or 2K Showcase mode. If the A.I. reverses a signature move or finisher, players will have to earn them all over again. In the older games, players could end matches with any strong move if their opponent’s body was red all over.

Speaking of annoying features, managers are now the most frustrating thing in the entire game. Whenever a manager distracts the player, your wrestler automatically stop wrestling. Even if the opponent has woken up and is about to attack you, there’s nothing you can do about it. Why can’t you just ignore the manager and concentrate on the match like before?

Specific match types have also not been improved or changed at all. Ladder matches still feel awkward when wrestlers just tug that belt when they are on top of a ladder. The Royal Rumble mechanics still feel stiff as well requiring players to just mash buttons when an opponent is near the ropes. 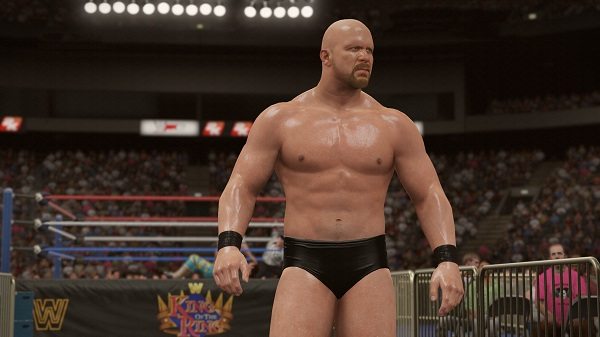 Outside of normal matches, two of last year’s big modes are back. This is the MyCareer and 2K Showcase modes. The former has made big improvements as the player’s created wrestler has more options in terms of how they want their wrestler to act. After a big match, the player’s wrestler has a chance to partake in an interview with Renee Young. The player can choose to act nice like a babyface, or a total douchebag to become a heel.

The MyCareer mode also lets the player to decide who they want to ally with and who should become their enemies. The player has the option to even interfere in other wrestlers’ matches to start off a heated rivalry and more. This mode is more entertaining than last year’s effort, although it is still hard at the beginning because the wrestler’s stats are horrible at the start…

The sole 2K Showcase mode available at WWE 2K16’s launch involves the career of Stone Cold Steve Austin. Arguably, this mode is more repetitive and boring than last year. This is because Stone Cold is the only wrestler that is playable in this mode and the goals in each match repeat themselves over and over again. The player will do the same tasks such as ‘damage this wrestler’, ‘irish whip them’ or ‘give them a stunner’. These tasks appear in every match and it can get boring doing them a few times.

They bring back features, and take some out

The 2K Showcase mode does have decent commentary though. This is mainly because of the legendary pairing of Jim Ross and Jerry ‘The King’ Lawler. Outside of the 2K Showcase mode, the main commentary is still garbage. The commentators don’t acted excited when you execute a finisher. JBL also sounds like he fell asleep recording his lines for the game as he sounds monotonous compared to his real-life self.

WWE 2K16 does bring a host of features back that will make hardcore fans happy. Many of the create options return as players can create a diva, championship, arena and show now. Players can now also create up to 100 wrestlers which is up from the measly 25 wrestler quota from last year. Several match types of returned as well as they added handicap matches back and more.

That being said, there are still some features sadly missing. The highlight reel is still missing so players cannot replay and view their best moments in a match. They only have to rely on the game’s own replay system, but this is disappointing because the replay system only happens during finishing moves. Players still cannot import their own music and use them as entrance themes too.

The availability of match types are also inconsistent. The ‘Buried Alive’ match appears in the 2K Showcase mode when Stone Cold faces The Undertaker, but is not available to select during the Exhibition mode. This is the problem with recent WWE video games. They bring back features, and take some out. There has never been a game that includes EVERYTHING.

Speaking of everything, the game does have an impressive roster of well over 120 wrestlers. Many current wrestlers are in the game as well as several WWE Legends. Some hardcore fans will be disappointed that the game is still outdated. Many fans know that the popular NXT divas like Sasha Banks and Bayley won’t be in the game – not even as DLC. Recent returnees like Alberto Del Rio and The Dudley Boyz missed the deadline to be included in this game too.

Overall, WWE 2K16 is an adequate follow-up to the highly disappointing WWE 2K15. The game packs a ton of content as there are well over 120 wrestlers for you to play and several more features have been added back. That said, it still has a long way to go to reach the heights of ‘Here Comes The Pain’ or ‘WWF No Mercy’. Still, this should satisfy hardcore WWE fans until next year’s game comes around.