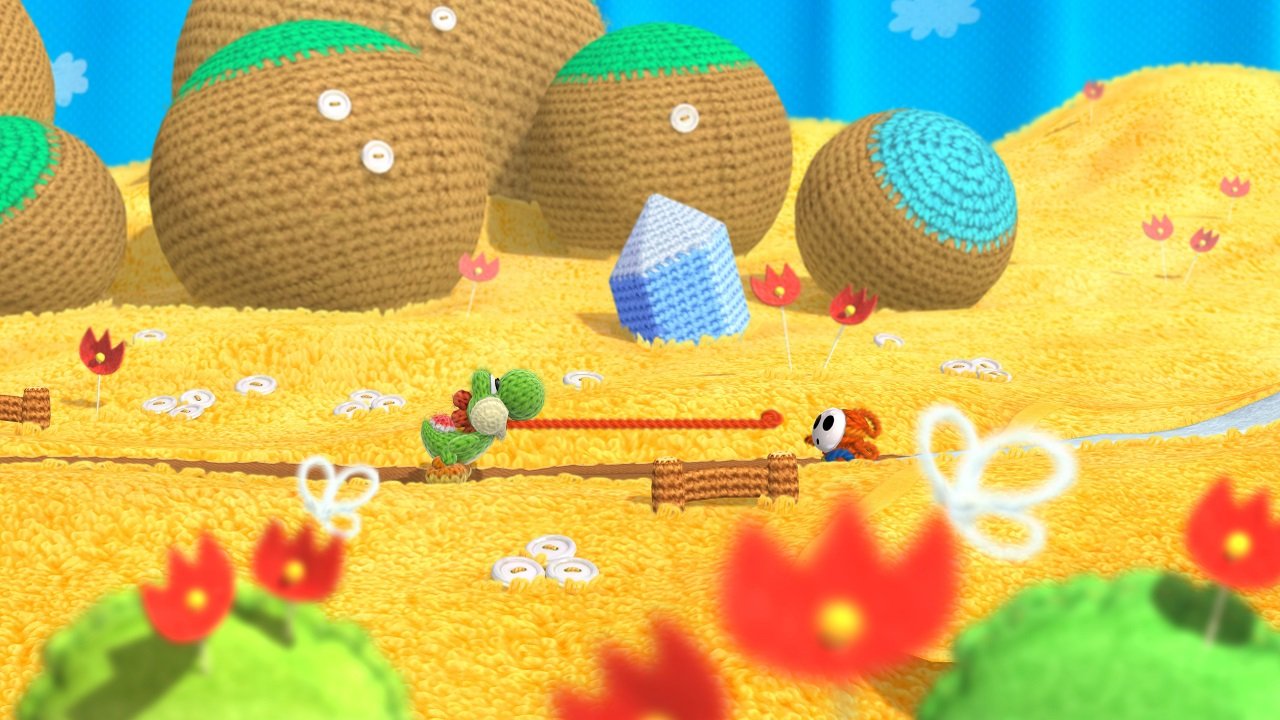 Mario is the headliner for the most popular video game franchise of all time, yet his best buddy has always had a bit of a mixed bag when it comes to his own outings. Yoshi has been the star of arguably the best 2D Mario game, with Super Mario World 2: Yoshi’s Island, but also some of the most mediocre.

Trying to recapture the magic of that SNES classic has proved challenging, even for the game design wizards at Nintendo. With their latest, which actually comes from Japanese developer Good-Feel, Yoshi takes center stage once again, with a yarn makeover which makes the game all the more interesting. While Yoshi’s Woolly World doesn’t quite reach the platforming excellence of Yoshi’s Island, it stands as the closest yet for Mario’s supporting character.

Yoshi’s Woolly World, like most games in the Mario series, doesn’t really mess around with a story. A bad guy shows up and nabs a bunch of yarn Yoshis, then runs off, leaving a trail of yarn behind him that our hero can use to save his friends. Why Yoshi and his entire world is made out of yarn isn’t explained, nor should it have been. Players are thrust into this world and immediately know what they are doing, how, and why. This is game design simplicity at its finest, setting players on an adventure within the first few minutes of the game. 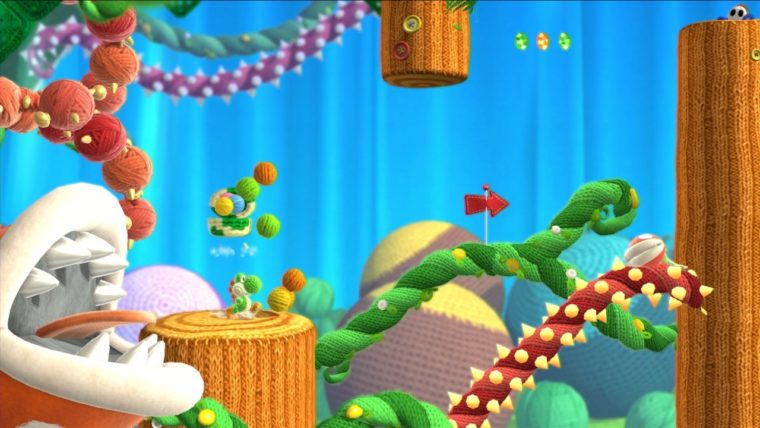 That adventure has you traversing through 2D levels, all made up of yarn and other fabric. This aesthetic choice is the defining factor of Yoshi’s Woolly World, and while some may view it as a gimmick, even the most jaded gamer will be overwhelmed with the charm of this world. Yarn Yoshi himself is easily one of the cutest characters in video game history, taking the already great character design and making it even better. Then you get a look at the other characters in the game, and the world that they inhabit, and you are wowed by the creativity that went into it all.

Fire made from flowing pieces of yarn, puffy clouds created with frayed wool, and the always moving ground under Yoshi’s feet paint a picture of a handcrafted world that players will quickly come to love. Small touches, like how Shy Guys hold crochet hooks, and the way that Yoshi transforms into other shapnes, all present a game that is chock full of creativity and joy. Motion plays a role as well, as items move with a realistic animation that enhances the illusion. Many times in Yoshi’s Woolly World players will find themselves feeling like they are looking into a handmade diorama, rather than a computer generated video game.

All of this would be lost if the gameplay didn’t hold up, as many felt had happened with Good-Feel’s previous game, Kirby’s Epic Yarn. That game had an extremely similar visual style, that was quite impressive, but fell flat due to an over-easy gameplay experience. Heading into Yoshi’s Woolly World one might expect the same fatal flaw to appear, but luckily it does not, at least not to the same effect. In fact, many moments in Yoshi’s Woolly World present quite challenging platforming puzzles for the player to solve, if they choose to go off the beaten path.

While getting through the level might be easier than classic Mario titles, with their propensity for floating platforms with a short time limit, Yoshi offers up a different sort of challenge. Nintendo has been pushing more toward optional difficulty as of late, working in various collectibles that are tough to acquire, and mixing in items that can make the whole thing easier, if the player wants it that way. 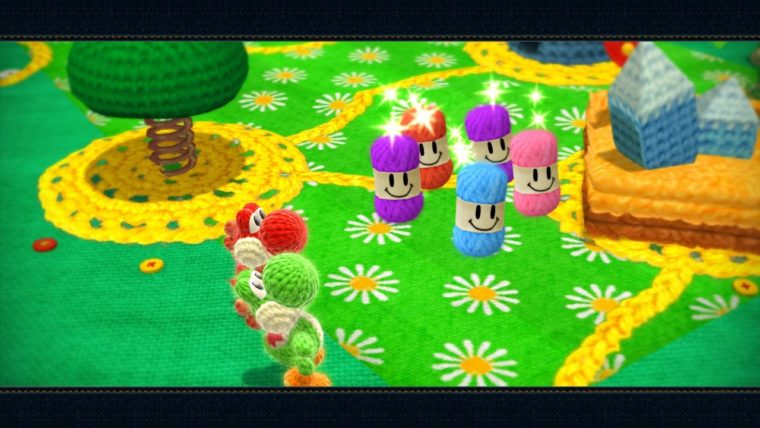 Here, the collectibles come in the form of the traditional flowers, beads that serve as currency, and stamps that unlock for use with Miiverse. However, the most important collectibles are the bits of yarn that can be used to form a new Yoshi design. While the other collectibles are easily forgettable, the bits of yarn are one of Yoshi’s Woolly World’s greatest strengths, making the usual Mario style collectibles actually worthwhile for players to find. They aren’t just there to up the challenge factor, they actually unlock different designs that players can use on their Yoshi. Collecting all of them, or at least the most enjoyable patterns, will quickly become an obsession for many players. Finding them isn’t easy though, as you’ll have to check every corner, and find every secret passage.

On the easier side, if players find a level to be too difficult, they can unlock a special badge for that mission. These have various effects ranging from extra life, to adding in a companion, to just skipping the level entirely. And if that isn’t enough, you can always turn on Mellow Mode, which just throws some wings on Yoshi, and lets you run through the level without any challenge at all.

And of course you can have a friend join you on the quest, as every level in Yoshi’s Woolly World is able to be played cooperatively. Two players, not four as has become the Mario standard unfortunately, can jump into any of the levels in the game. However, players might find that there are less levels here than they have come to expect from games of this sort.

Six worlds with eight levels a piece are contained in Yoshi’s Woolly World, not counting special levels that need to be unlocked via other means. Each of these has no time limit, so it’s tough to judge their length, but overall they don’t feel more robust than the usual Mario/Yoshi stage. It feels like there should be more meat to the game, especially given the fact that some of the levels are a little uninspired. Overall the game is filled with fun and imaginative missions, but with so few it would have been better if more had been given some extra attention. 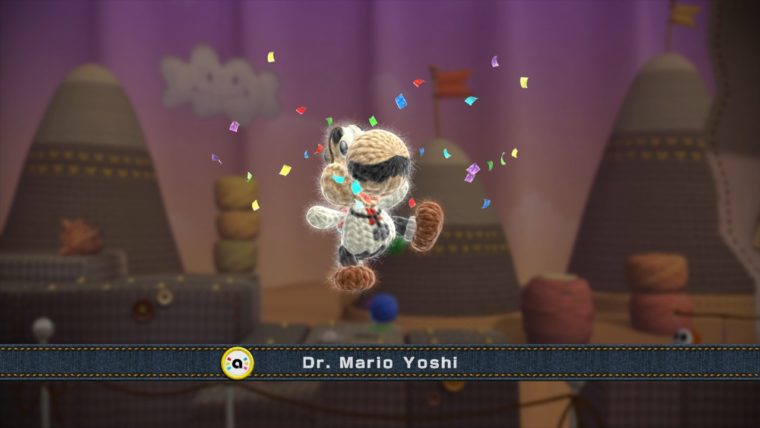 Of course, no Nintendo game is complete these days without some Amiibo support, with Yoshi’s Woolly World having simultaneously some of the best, and the worst implementation of the collectible figures. The worst are the Yarn Yoshi Amiibo, which simply add a second character to the game that also follows your control inputs. This is somewhat baffling, as the benefit is quite small, especially when compared to the massive detrimental confusion that having two characters on screen causes.

On the better side, almost all of the other Amiibo figures can be scanned into the game, unlocking a Yarn Yoshi version based on that character. Some of these are ridiculously cute, and any Nintendo fan will love scanning in their favorite characters to see what sort of costume it will unlock.

Yoshi’s Woolly World is easily one of the best looking games on the Wii U thanks to its excellent use of visual design. A handmade world creates a wonderful illusion, while crafting a fun and colorful atmosphere for your platforming adventure. While that platforming gameplay might not hold up fully to the series pedigree, it is closer than the last few Yoshi games have been at achieving past excellence. Collectibles push things to the next level though, allowing a challenging experience that will quickly cause addiction. And with dozens of Yarn Yoshi costumes based on other Nintendo characters, this is an Amiibo collector’s dream game.