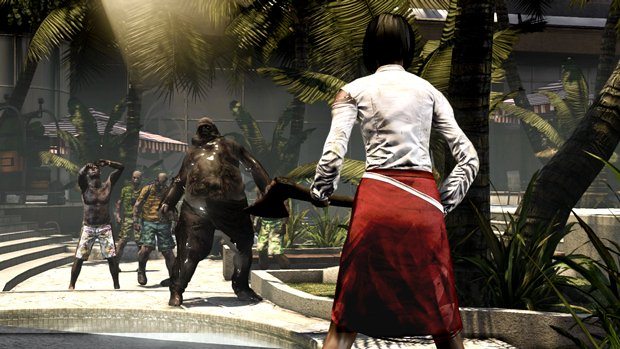 If I had to describe what I’ve seen so far from Dead Island, I would say that if Dead Rising and Left 4 Dead had a baby that was immediately put on steroids, this is what it would look like. I do not mean that as a negative description by any means. The gameplay featured in this video may be graphic and offensive to some, but it also looks like one of the most well put together zombie apocalypse games to date.

The detail, regardless of how crude it may be, is pretty impressive and the combat system looks smooth and polished. Sure, you can lop off the heads of zombies with a splatter after you’ve already knocked them down and apparently the infection has caused some of the female zombies to lose their clothing, but when has the dignity of the undead ever been an issue?

What I like about the game so far is that it has made deliberate intentions to differ itself from its zombie competitors. Instead of giving players a multitude of guns and ammunition (something we’ve seen countless times before) Dead Island will emphasize melee combat. Lots and lots of gory melee combat.

The inclusion of vehicles as a weapon to take out those blood-thirsty cannibals will also be a nice addition, though you can see from the video that killing the undead will take a toll on your car. The realism of that shattered windshield really shows the depth that this game could provide. Watch 7 minutes of gameplay here.