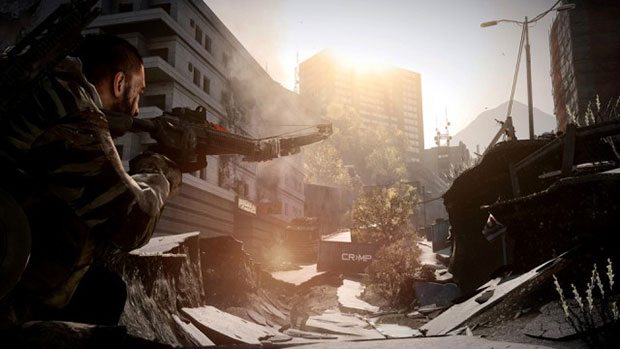 The next Battlefield 3 expansion is set in an earthquake ravaged area, where soldiers and landscapes will have a much different appearance than any other seen in the game before. The Aftermath expansion will also feature new weapons and vehicles, one which is explored in the video above.

Judging from the video, the crossbow is an equally effective weapon at close and long range, against both ground units and vehicles due to the variety of arrows that can be used with it. Called a “makeshift crossbow” by DICE themselves, it’s proclaimed to be “the most versatile weapon addition in the history of Battlefield”.

The crossbow features four distinct bolt types for various situations. The first bolt unlocked is the standard “barbed bolt”, which features a pronounced bullet drop and limited range. The second is a modified explosive round, laced with C4 for explosion on impact. The third bolt includes a radio signal which can be used for scanning an area for enemy activity. Finally, the doubled feathered bolt allows snipers to use the crossbow for long range precision shots.