Is Microsoft bringing “IllumiRoom” to the Xbox 720? 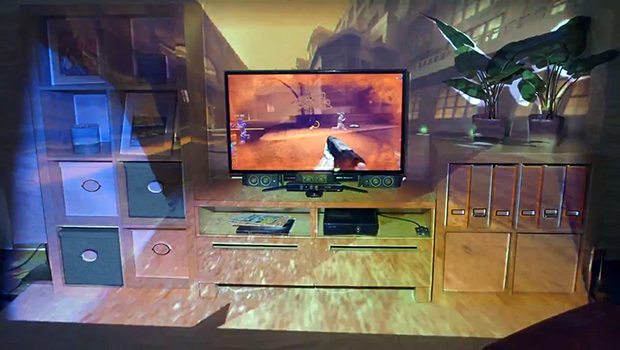 Remember that leaked document from a couple of months back that sparked rumors of projection technology to be included in the Xbox 720? Ok, let me refresh your memory…it’s here. It turns out that this is a real thing that Microsoft is working on, and it very well could be featured in the Xbox 720 (or whatever Microsoft calls its next Xbox). Today at CES during the Samsung keynote, Microsoft showed off a video of technology they are calling IllumiRoom, that expands on the interaction with media in the home.

The technology projects images outside of the boundaries of your television by mapping your room with the Kinect camera, creating the illusion of your game, movie, or other media enveloping you. Over on the “Next at Microsoft” blog, details about just what was shown were revealed by the company.

“You may have seen interesting 3D-mapped projections over the past few years – Microsoft partners like Nokia and Samsung have both used pre-rendered footage in recent marketing efforts. What’s new in this work is that our researchers used Kinect for Windows to map the room in real-time in order to make projected illusions fully interactive. Most importantly, the effects shown in the video were captured live as they appeared in the living room environment and are not the result of special effects added in post processing.”

Outside of the brief reveal, Microsoft didn’t have more to share about the new technology and it doesn’t look like it’s heading to retail anytime soon. However, with a new console announcement looming from the company, this could be a major selling point for their next-generation system. Expect more news about this IllumiRoom and how Microsoft plans to use this technology at CHI 2013 in Paris.

Home / Videos / Is Microsoft bringing “IllumiRoom” to the Xbox 720?