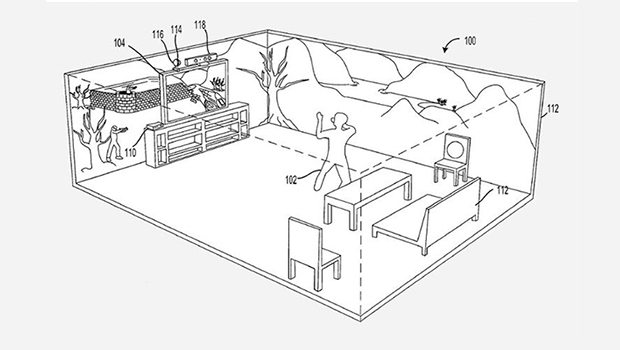 It looks like Microsoft has been cooking up some new an interesting ways to play games on the Xbox 720. A new Xbox Kinect compatible peripheral that projects gaming environments on player walls was discovered to have been filed by the company, presumably for the Xbox 720. Filed back in 2011, the patent was for an “Immersive Display Experience”, that by images supplied looks like an immersive gaming world that extends beyond the boundaries of a television or monitor.

Included with the patent were a few images that look like they are projecting the entire game world into the player’s living space. The patent reads:

As depicted in the image above, it appears that the player is playing without a controller and given the ability to see outside of the normal scope of vision on the television. While this is certainly looking like a long shot for the next generation, it’s certainly cool to think about as a future for the medium. The problem is, Microsoft has yet to get that whole shooting without a controller thing down cold.