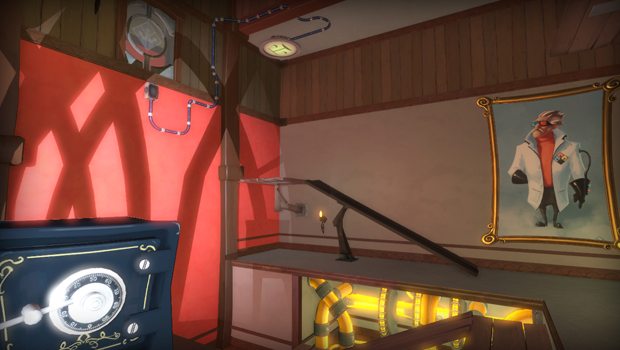 If it kind of reminds you of a “fuzzier” version of Portal, you’re not too far off. From the mind of Kim Swift, one of the creators of the original Portal, comes an inter-dimensional puzzle-platformer of epically silly proportions. Developed by Airtight Games, the people behind the game Dark Void, Quantum Conundrum puts the player in the role of a young kid who must search through his eccentric uncle’s puzzle-box of a house where the estranged scientist, Professor Fitz Quadwrangle, has gone missing. The player will utilize the uncle’s Inter-Dimensional Shift Device to solve puzzles in order to move from room to room to find this strange man.

I’d describe how the mechanic works, but it’s probably best if you just watched the trailer to see for yourself. Sure, it may be another game that involves “test chambers” that require the player to place a cube shaped object on a button to open a door using a crazy scientific device strapped to your arm. At its core, however, it is quite unique. Flipping through various dimensions that alter the physics in the game in order to move about isn’t necessarily a mechanic you see a lot of these days. The cartoony puzzle game will be available for download on Xbox 360, PS3 and PC this summer and certainly does look like a fun little adventure, despite its apparent familiarity.