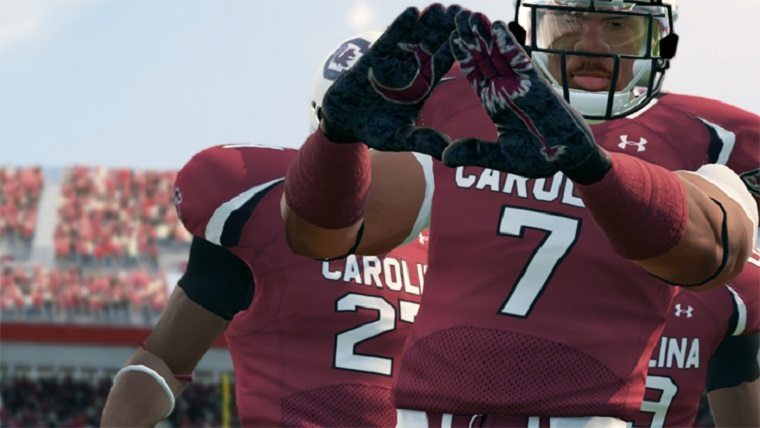 The college football season started two weeks ago and has already had plenty of exciting moments. With such excitement, we really wish we could have a new NCAA Football game to play. While that isn’t going to happen for awhile, we at least wish that we could play the last entry on a current-gen console, which is why NCAA Football 14 should be backwards compatible on Xbox One.

In the past, we would have had an NCAA Football 17 release this past July that college football fans could be playing right now, but the series came to an abrupt end in 2013 with NCAA Football 14 serving as the final outing to date due to ongoing litigation.

This game released on Xbox 360 and PS3 at that time since that was months before the launch of current-gen consoles, which makes the lack of any new games even harder. Ever since the Xbox One was announced as getting backwards compatibility for Xbox 360 games last year, NCAA Football 14 has been the top choice I’ve wanted to see added, alongside the now backwards compatible Red Dead Redemption.

The graphics may not live up to the level of modern Madden games, but there is just something special about the NCAA Football franchise, as the game plays different and offers us the chance to use our favorite college football teams.

NCAA Football’s Road to the Show mode is a fine example of a franchise mode done right, down to the letting you play a high school football season if you wanted. The game still has an okay online community as well that is bound to get a major boost if the game was made backwards compatible, similar to the Left 4 Dead games.

Sports games have really not been part of this list thus far, which is not a surprise considering EA Sports and such would not want to cannibalize their latest entries with old. However, NCAA Football is a very different story as there have been no recent entries to worry about stealing away sales from.

Another concern is that people would think EA Sports wouldn’t have the rights to do it after they lost the NCAA license. However, this has not stopped them from selling the game digitally through the Xbox Store on the 360, including them offering numerous sales for it. Considering they can still distribute the game itself, you would think there should be no legal problem with allowing it to be played on Xbox One for those that already own it.

There has been no official word from EA Sports on whether this could happen or not in the future, though supposedly someone previously involved with the NCAA Football franchise has said in the past it wasn’t happening. If that is truly the case, hopefully that was just a case of them not caring at the time.

Considering they can still sell the game digitally on Xbox 360, there is no question the game would drum up some sales from those that gave up hope and traded in the game previously or just want to buy it for the first time. Even if they are concerned with selling it on Xbox One, they could agree to make it backwards compatible as goodwill for those that already own the disc or digital version of the game on Xbox 360.

NCAA Football 14 is currently #65 by total number of votes on the Xbox website, so make sure to go vote and add your comment to let them know just why this game should be backwards compatible on Xbox One.