While waiting nervously on Frontiers, check out these awesome Sonic fan games! There’s no question that Sonic has left an indelible legacy on gaming in general, although it’s also unfortunate that recent years have seen some pretty sub-par contributions from the series’ developers, Sonic Team.  The impressive part about this, however, is that the fans continue to adore the series, knowing the potential for good games sometimes missed by the main developers, and this has led to a plethora of memorable fan games in the Sonic community.  Some are complete experiences, while others are glorious works in progress, each one a showcase of different ideas either patched together from failed mainline projects, loving remasters, or entirely novel ideas.  This is our list of the 10 Best Sonic Fan Games. Sonic 3 AIR, or Angel Island Revisited, is a fan remaster of Sonic 3 & Knuckles, featuring widescreen format in 16:9 aspect ratio, an option for a remastered soundtrack instead of the original, the drop dash mechanic, an achievement system, and fixes for slowdown issues during Blue Spheres stages.  One particularly striking aspect of this game is the mod support, allowing fans to enhance their experience further, and the result runs smoothly.  You can play through the game and customize it as you see fit, as an alternative to the version released in Sonic Origins recently.

One of the coolest things about the Sonic fangame scene is when a new engine emerges and it gains traction, especially when as attractive as the Sonic Infinity engine.  While this is not a full-fledged game, there are numerous fully playable levels created by the developers in this engine, such as Sonic Infinity+ which showcase a massive explorable world with incredible Unreal Engine 4 visuals on full display.  The gameplay uses the best aspects from Sonic Adventure 1 and 2 while featuring crisp framerates and modern textures/effects.  It’s clear that Frontiers wanted to take cues from games like this, but with the case of Mania, perhaps the fan-built game engines truly are the ones that work the best? Sonic Utopia is a solid example of loving care for both the classic visual style and music, along with the fast-paced sensibility of 3D Sonic.  It is an open-world setting for Sonic and flows rather nicely, appealing to the nostalgia of players while still offering a novel presentation for the series.

Some Sonic fangames are meant to produce novel experiences or concepts for players, while others feel like reasonable extensions of fan nostalgia, carrying the players in pleasant but approachable and familiar directions.  Sonic World DX is an experience meant to support the modding community as much as possible, empowering them to make full recreations of previous Sonic games’ levels, including obscure ones like Knuckles Chaotix, along with constant updates for playable characters.  In the grand scheme of fangames, this one is for the fans, by the fans, as a collective instead of one or two central figures. 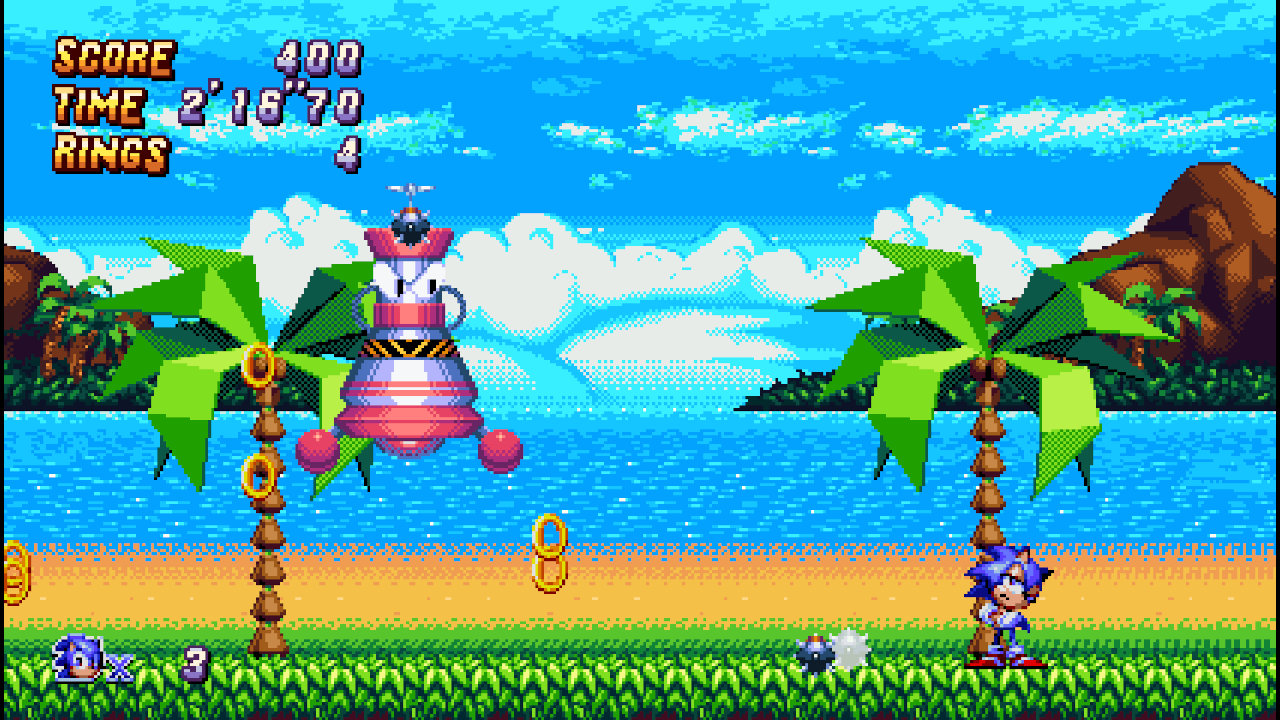 Sonic Robo Blast was originally a rough-looking fangame by Sonikku which, despite being remembered fondly as a decent product of its era as a fangame, has certainly not aged well.  However, the concepts and levels from this are being recreated spectacularly.  The sprites, animations, and colors borrow from Sonic CD, but also feel distinctive and original, with new animations for Sonic and even fresh-feeling mechanics which help enhance how Sonic can gain momentum.  His idle animations, enemy designs, and the game music feel authentic, and Sonic’s got plenty of attitudes, all on full display in just the one demo released so far in this Sonic fan game, the legacy of the original shining through. Some Sonic games are essentially remastered, or throwbacks to a simpler time.  Sonic Z-treme is a fan game that answers the question, “What if 1996’s Sonic X-treme, was never canceled?”  And the result is this excellent contribution.  Using concepts and assets suitable for a Saturn system, you can run this directly off a burned disc on the console (if you’re lucky enough to find one) and witness a pretty special experience.  Sonic’s certainly not at his fastest in this, but it plays excellently and makes good use of the Saturn, and if the X-treme that was in the works resembled this upon being released, the franchise, the Saturn, and Sega as a whole would have been entirely different, and maybe still making hardware.

But hypotheticals like this are far-fetched, and all we have to work with is reminders such as this.  Another striking aspect of Sonic Z-treme and its inspiration is that it not only resembles the experience of controlling Mario in 3D for the first time like in Super Mario 64, but it also resembles other 3D platformers of the era including Crash Bandicoot.  It even seems to resemble aspects of the atrocious Bubsy 3D, although Z-treme at least resembles something close to a final product, while Bubsy’s presentation can only accurately be described as “allegedly complete and a platformer.”  Be sure to check out this one, if you can.

Sonic Before the Sequel While this Sonic fan game is a decade old, it’s a masterpiece.  The authenticity is brimming here, but it still brings expert-level design to the fan game scene and plays exceptionally well.  Story-wise, it connects the plot of the first Sonic game to Sonic 2 and essentially mashes together aesthetics from the Genesis titles as well as from CD, and the result feels like it could be played reasonably well alongside Sonic 1-3 and CD.

But the biggest standout?  The MUSIC.  While it’s not the same chipset as from the Genesis, it’s arguably something better – it embodies the funk and spirit of Sonic games while remaining relentlessly catchy and sounding decidedly more modern, with zones such as Metro Madness, Arcane Altitude, and Twilight Tower being particular highlights of the Falk and Funk Fiction musical contributions.  You could add this OST to your Soundcloud playlist and listen for hours.  This is fully playable, from start to finish on PC.

Sonic After the Sequel Much like the previous entry, this game ups the ante on level design and concepts, such as running into mounds of sugar for speed boosts in Sugar Splash Zone or Donkey Kong-style barrel platforming in Foliage Furnace Zone.  Much like in the previous entry, there are cutscenes included, and it connects the story to Sonic 3.  The gameplay feels smooth and engaging enough to return over and over again, and classic Sonic fans should not sleep on this.  The music is nuts for this game, adding to the previous artists with talent such as Great Lange, Andy Tunstall, and Michael Staple, with tracks for Foliage Furnace, Moon Mansion, and Redhot Ride being absolute bops.  Much like BTS, this is fully playable on PC right now.

Sonic in the Doom Engine.  They mix better than you think.  It’s phenomenal.  In many ways, this captures the spirit of classic Sonic and combines it with a fresh interpretation for the 3D platforming side of the franchise, preserving the feel of the classic assets and playing like a dream.  Fans are quite taken with this match made in heaven and have recreated scenes such as Sonic Adventure through this, and it’s pretty great.  It has the energy and aesthetic of the original Genesis titles, but is brought faithfully to 3D, and even includes concepts from other Sonic Team ventures such as the flight mechanics and rings from Nights Into Dreams while playing as Super Sonic.

Combat feels satisfying, movement is smooth, zones are nice and open, and the music, crucially, is another hit.  Finally, the mods on this game are pretty crazy, including a Persona one, but perhaps most notable is the following, which deserves its entry. What’s more natural an extension of the Sonic Robo Blast 2 formula than to add go-kart game mechanics?  This multiplayer-focused Sonic fan game combines tons of customization with a plethora of fan favorite and obscure Sonic characters, NPCs, and badniks.  There are even non-Sonic franchise characters such as Kazuma Kiryu from Yakuza, which is just such a delightful surprise to see, Nights, Hatsune Miku, and even Doomguy.  In many ways, it’s a superior kart-racing game to many modern retail-priced competitors, with insane technical depth, a mind-boggling amount of tracks, and plenty of attention from prominent racing game players, with support for up to 16 players in a race online.

This concludes our list of the Best Sonic Fan Games.  The Sonic fan game community is a thriving community brimming with ideas, some fully fleshed out, while others only provide a glimpse but are far too tantalizing to pass up.  Don’t sleep on any of these titles, especially if you want an enjoyable platforming experience, and want to go fast.