How you'll have time for anything else is anyone's guess. 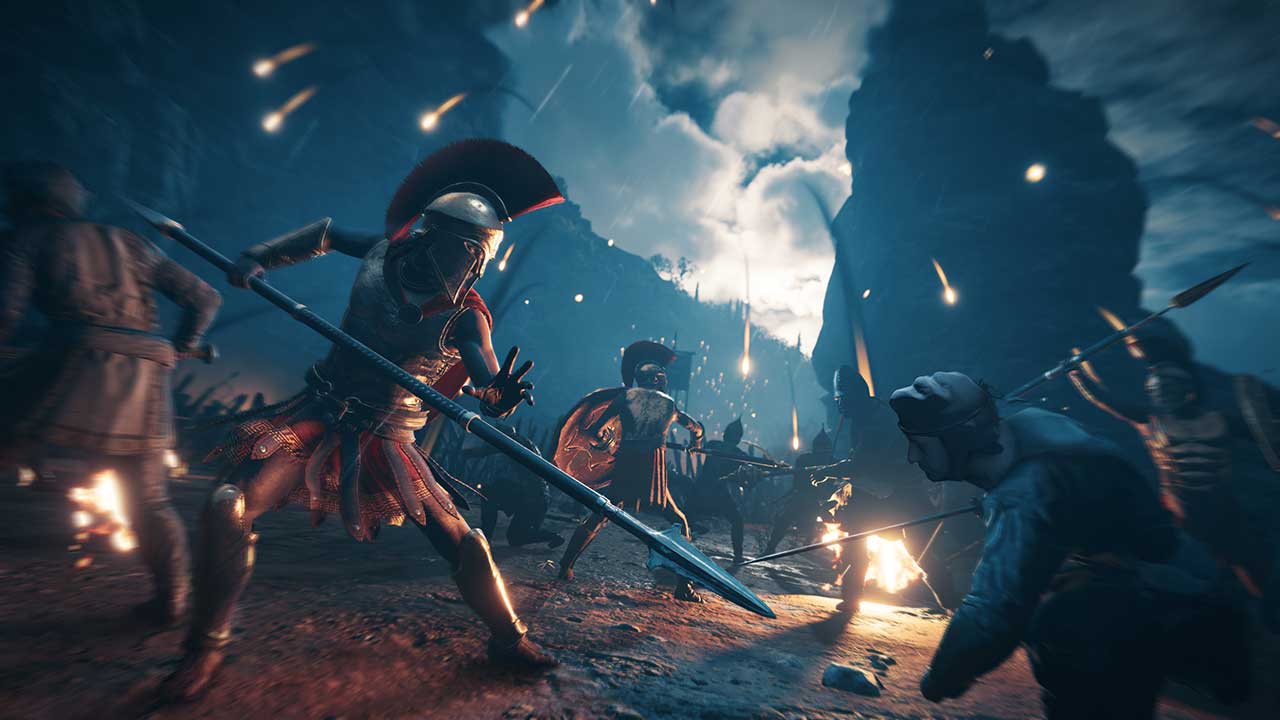 Odyssey is quite ridiculous in what it’s offering.  It takes every good system that’s been introduced over the years in the Assassin’s Creed series, adds a bunch of RPG mechanics to that formula, and sets players off into the Ancient Greek-era for a 100+ hour adventure.  After spending a day with the game, I was begging for more and I was just scratching the surface. 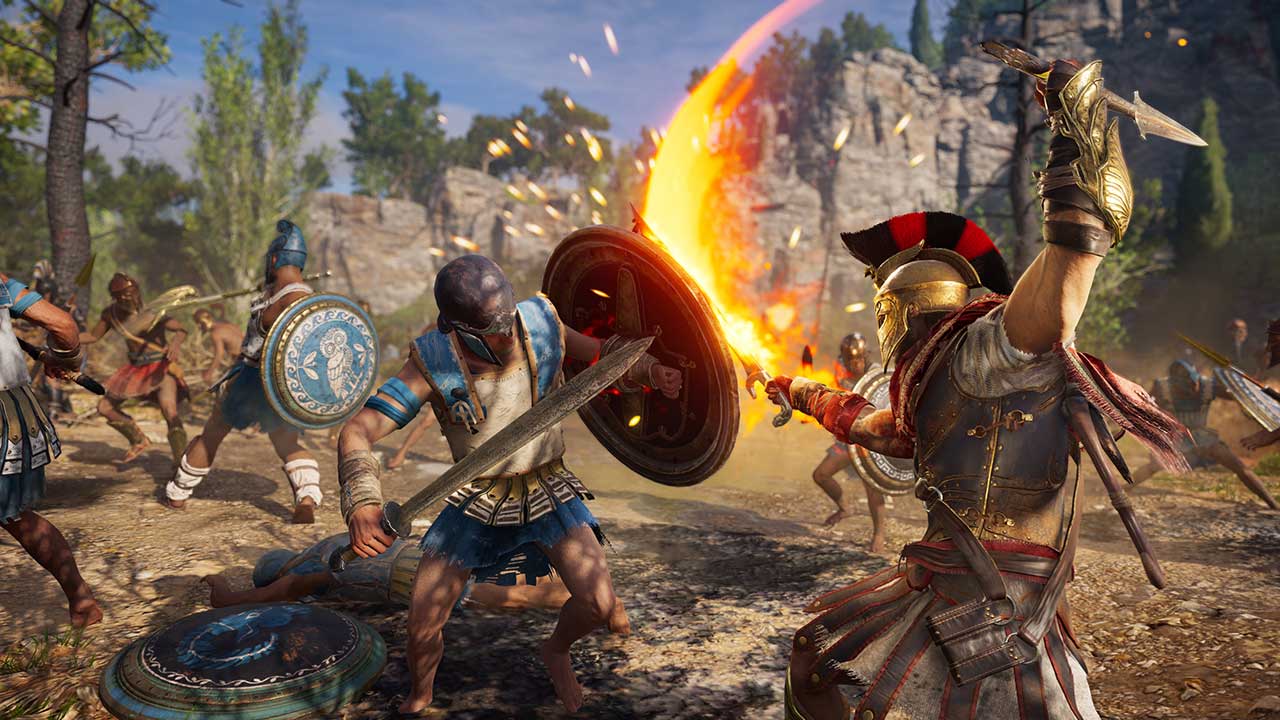 Assassin’s Creed Odyssey very much looks and plays like Assassin’s Creed Origins.  This in itself is a good and a bad thing.  Since we’ve become so accustomed to Ubisoft releasing a yearly Assassin’s Creed reskin we’ve been pretty much trained to think that each year is a rehash of the previous year, with the changes being incremental.  It takes a few hours, but once you start to see the many new systems being rolled out in Odyssey, you begin to realize that this isn’t just a new Assassin’s Creed game, it’s an increase in the size and scope of the series.  Not that Assassin’s Creed games have ever been small, but they’ve never had it all… not like this.

Assassin’s Creed Odyssey has naval combat and the ship RPG mechanics.  It has large scale battles that you participate in where the Athenian and Spartan forces square off.  It features a bounty hunter system that can make your life miserable.  It has some of the best combat the series has ever seen.  It offers more choice for the player than ever before.  It urges players to explore the world and gives them good rewards for doing so.  It wraps all of this in an incredible visual and audio presentation that we’ve come to expect from the series, and ties it into a setting that’s absolutely ripe for a great Assassin’s Creed game. 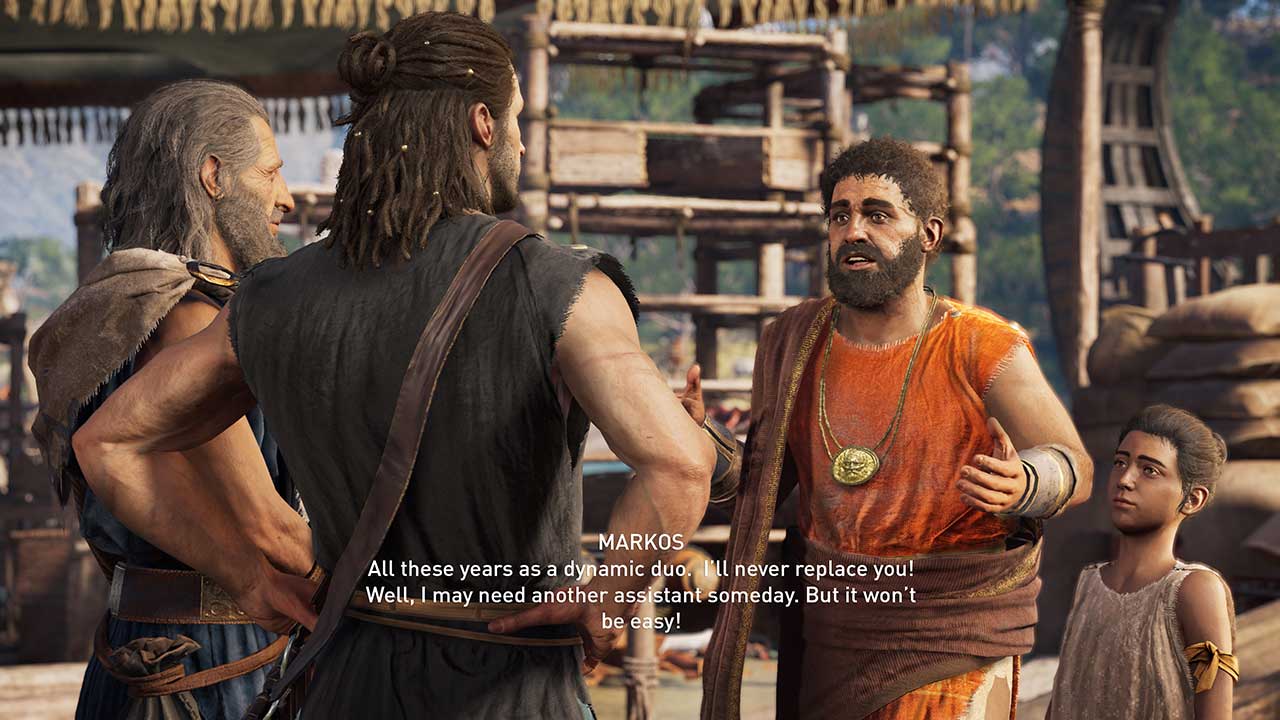 The choices start early.  Players will start out Assassin’s Creed Odyssey by picking either Kassandra or Alexios.  Regardless of who you pick, I was informed that there would be some minor differences seen across the story depending this choice.  While I’d love to reveal some of the story elements that I saw during this playthrough, it’s probably best to just say that Ubisoft appears to be sticking with the general formula of the series in this regard.  There are two parallel stories on-going in Assassin’s Creed Odyssey, and that shouldn’t be a secret.

While Ubisoft has been going down this path for quite some time with the story for Assassin’s Creed, where they’ve started to deviate wildly is in the amount of choice they offer to let players shape their own worlds by the actions and decisions that they make.  Odyssey takes a huge leap forward in this regard.  Choice and consequence seem to be at the heart of the systems in Odyssey.  Players have the ability to choose different dialog options, which opens up a branching narrative that ultimately shapes the way the game is played.  Want to help out some thieves who’ve stolen from the Spartans instead of killing them as ordered?  You can do that.  But the world will change.  Your future quests will change.  The enemies you face will be different.  These actions seem to have a butterfly effect on the game world that sets things in motion that could end up helping or hurting you down the line.  Playing through the game you won’t really notice as you are making these decisions and not really seeing what would have happened if…  But I was assured it was there.  In just the first few hours of the game I was being constantly reminded (by the developer looking over my shoulder) that if I would’ve chosen another option, the game would change significantly.  Even at the tail-end of my playthrough, my choices were still coming back to haunt me as a powerful roadblock enemy wouldn’t have been there had I chosen the OTHER option at a particular branch of a mission. 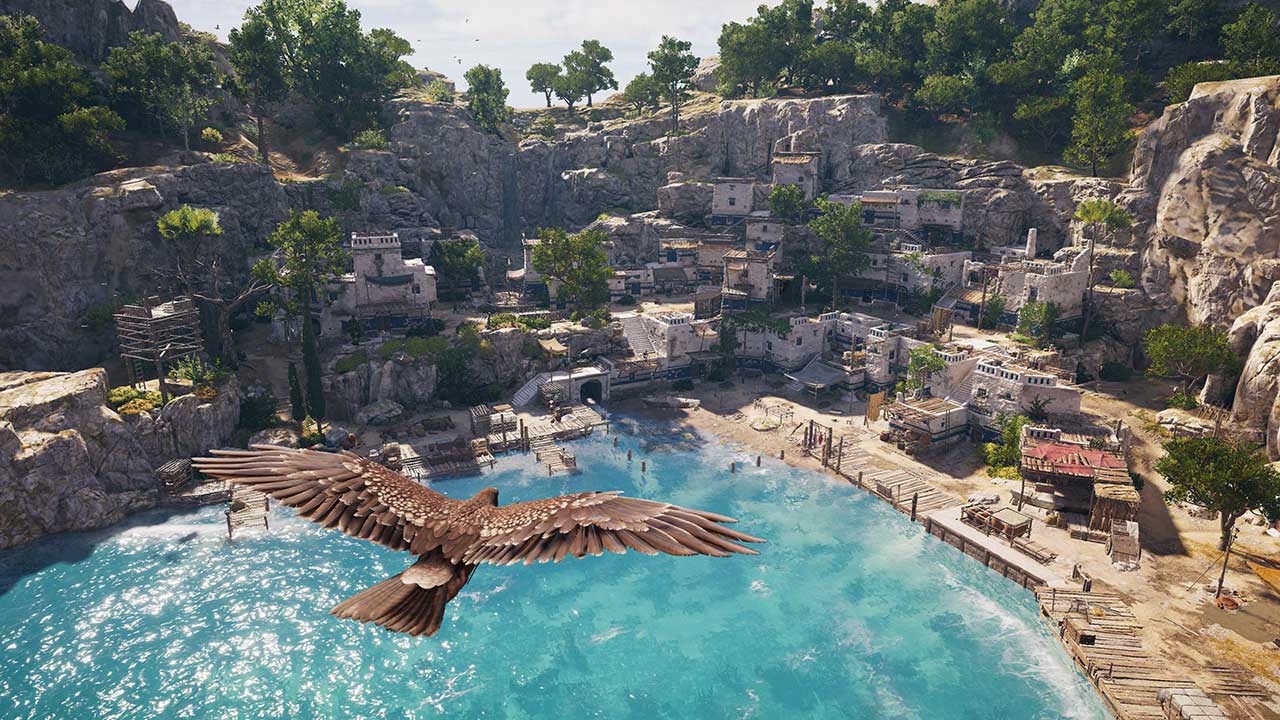 This in itself is a pretty big step forward into open-world ARPG territory for the series.  But all of the stuff that made Assassin’s Creed an open world action game are still very much there.  It’s got everything you’ve come to expect from an Assassin’s Creed game.  The traversal and climbing mechanics are still there.  It’s still incredibly combat-heavy, but it adds a new skills system to the game.  It takes the loot system from Origins and expands on it.  Ubisoft appears to have struck a good balance here with making Alexios or Kassandra feel like your own.  They’ve certainly got a story to tell you, and will do so, but they also give you all the freedom to deviate in different directions along the way.  This in itself is more than enough for Assassin’s Creed fans and it was introduced to us somewhat in Origins.  But that game marked a turning point for the series.  One, where in hindsight, feels they dipping their toes in the water.  Odyssey feels like they’ve dived-in head first with a clear objective to have it bursting at the seams with things to do and systems to manage.

It was quite overwhelming, the first hours of Assassin’s Creed Odyssey.  There’s a lot in this game.  All the way up to the point where we had to shut it down, I was learning something new and seeing new systems in action.  The most interesting of which was the new bounty system in the game.  That saw your character raising a wanted level of sorts.  This wanted level would then present a constant threat to the player as bounty hunters would then be on your tail until the point that you either faced the music and fought this character, or paid them off to leave you alone.  It almost always threw a wrench into those run of the mill missions and giving the general open world exploration a sharp edge that kept you on your toes and definitely something that made the world feel even more alive.

Plunging you deep into Ancient Greece, it’s not just the traditional Assassin’s Creed fare.  There’s naval combat, and it’s the deepest we’ve seen since Black Flag.  Alexios or Kassandra can grab a ship and then go about the world recruiting a tip top crew to hit the Mediterranean Sea and fight for loot, or just to stay alive.  While we didn’t get too deep into the sailing systems, what we saw was very reminiscent of Black Flag in that this wasn’t just a travel mechanic in the game, it was a full-fledged game mode all in itself as you could do all sorts of ship upgrades and crew collection that would actually improve the effectiveness of your ship in-battle and the necessary ship-boarding sequences required if you want to get the other vessel’s loot.

Another new system that was introduced to us was the game’s new Conquest mode.  With the Athenians fighting the Spartans there’s ongoing war in Greece across its numerous regions.  Each region can be won and lost by each faction and Alexios and Cassandra can play a big role in who is the victor as they are able to fight alongside these armies in massive battles which definitely take a page from For Honor in terms of how they look and feel.  Prior to that though, there’s a series of open-world missions where players must steal War Chests, kill comanding officers, and weaken the opposition to open up an opportunity for this massive battle. 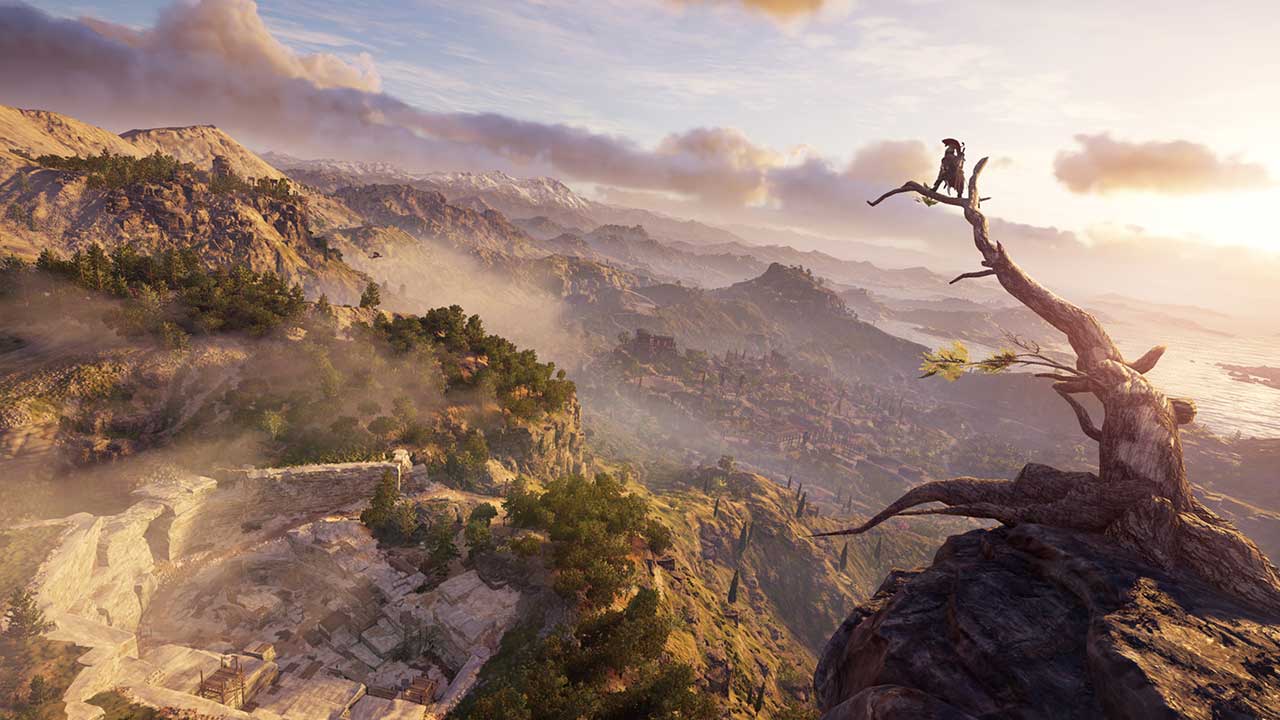 The carrot that Ubisoft dangles in front of players is on the progression front.  With skill points to spend on unique skills that change the gameplay in meaningful ways and a ton of different loot in terms of weapons and armor to experiment with, there’s a ton of variety that is birthed by progression.  Whether that’s going on these sea faring adventures, barreling down the main storyline, jaunting off onto side quests, or participating in region conquests, there’s always the allure of a new weapon or armor to better your character.  A lot of games take a bunch of different systems and throw them into these types of games.  The more the better, right?  Who doesn’t want a ton of stuff to do and be able spend a ton of time doing this stuff in the game they just spent their hard-earned money on?  What felt the best about all of these different systems is the way that it all came together to be a cohesive experience, with everything interlinked to make the game feel like I was playing the start of something great.

Will it be great?  I don’t know.  I’ve only played the first seven hours of the game, but it makes an incredible first impression.  We’ll find out when Assassin’s Creed Odyssey launches on the PlayStation 4, Xbox One, and PC on October 5th.