The Best Swords to Carve Through Elden Ring With. One thing that Elden Ring is not short on is weapons. There are all sorts of ways to dispatch the many imposing enemies that lurk throughout the expansive world. One of the most popular weapon options is a one-handed sword. These swords come in all shapes and sizes: katanas, rapiers, straight swords, and several others. Listed below are the top 10 one-handed swords you can attain in Elden Ring. This list of swords was compiled using criteria such as accessibility, sword move set, sword animations, and of course damage output. An easily attainable first sword to master is the Falchion. It is a curved blade that has some great early stats for a single-handed sword. Dropped by Demi-Human under the bridge at Kenneth Haight’s first location.

The Falchion is a typical curved blade that has fluid slashes and can be a great blank slate for the Tarnished to start with. You can spend your time leveling up your Falchion and by the time you get to some of the more powerful swords your Falchion may still be better than them. In order to get your hands on the Crystal Sword, you will need to journey deep into Liurina. The sword is located on some sprawling cliff sides that require traveling through a rickety old bridge. The sword is on a corpse laying on the ground and other than making it all the way here it is a fairly easy weapon to attain.

It is a beautiful purple sword that has some basic swings, but a very cool double spin slash ability. It also deals extra magical damage with each strike. If you want the Sword of St. Trina you will have to travel North-East to the entrance of Caelid. The sword can be found at the Forsaken Ruins. You will find a passage that is blocked off, to unlock the area give the Gargoyle a Stonesword Key. The path will open and you will be able to find a chest with the sword.

This blade has fairly good stats for a sword, and has a great design. This sword also has a unique skill called Mists of Slumber. It releases a faint purple mist that spreads across a wide frontwards area. This mist inflicts the sleep ailment upon foes and allows you plenty of time to escape or finish them off before regaining consciousness. The Wing of Astel has the ability to be a devastatingly powerful weapon and is a must-have for any curve sword fanatics. It can be found in a small chest at the top of the ruins in southern Uhl Palace Ruins. Can only be reached if you have access to the northern section of Ainsel River, by following the river East of the aforementioned ruins.

This one-handed sword allows for a chain of elegant slashes powered by nebula sorcery. This is incredibly powerful and can permit you to do some serious uninterrupted damage on tough enemies or bosses. 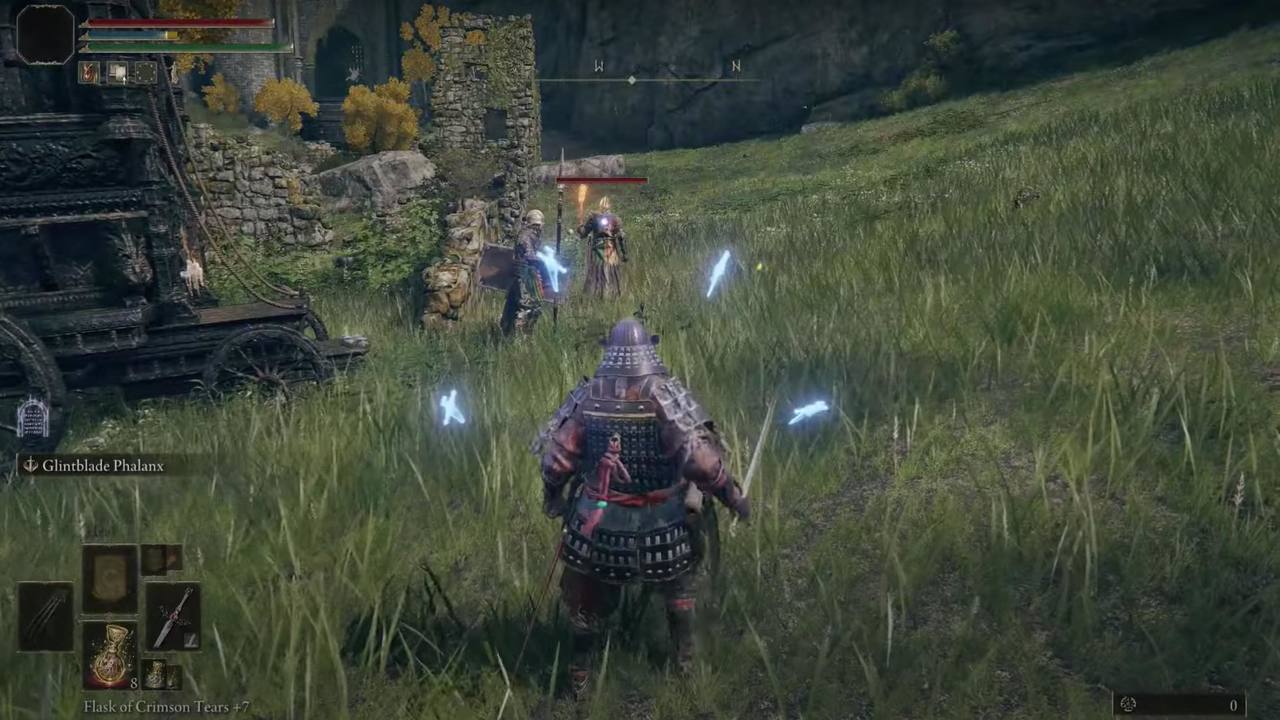 Rogier’s Rapier is a weapon you can easily attain by progressing through the natural story of Elden Ring. In Stormveil castle there is a friendly sorcerer known as Rogier. He normally hangs out over by a cathedral in the castle. After speaking with Rogier and then defeating Godrick the Grafted you will meet all the prerequisites for the sword. Then fast travel to the Table of Lost Grace and speak to Rogier again. He will gift you his powerful rapier.

This one-handed sword is quite powerful and has a high dexterity rating. On top of that, it has a magical ability that allows you to summon several knives around you. These knives will shoot out and strike any locked-on opponent. In order to get your hands on the Frozen Needle you will need to journey deep into Northern Liurina Lakeshore. Head South-West of the Kingsrealm Ruins. You will pass a camp of enemy knights and in the distance you will see two trolls moving a caravan. Kill all the enemies and the trolls in order to access the chest in the back which contains the Carion Knight’s Sword.

This sword is easily accessible and provides the wielder with a great base sword, but with some seriously devastating magic abilities. When activated the Tarnished will raise the blade over their head and unleash a charged magically enlarged version of the sword. It is a powerful weapon that is easily achieved if you go searching for it. One of the least talked about swords in the game, but statistically one of the most powerful. The reason this insanely powerful sword is both low on this list and hardly talked about is due to its rarity. The Magma Blade can be found in Volcano Manner in a back area where the Snake Warriors prowl. These Snake Warriors are using the magma sword and you must kill them to cause it to drop. That said the drop rate is extremely low and it seems that it is taking most players over 100 snake kills to get the sword.

That said, if attained, the Magma sword is one of the best in the game. It does a ton of damage, extra fire damage, and if its ability is used you can spew magma on the floor causing even more damage. A truly powerful weapon, but is it worth the grind? In order to get your hands on the Frozen Needle, you will need to journey deep into Northern Liurina Lakeshore. Here you will find the Kingsrealm Ruins. In these ruins are slews of enemies, but if you stumble around enough you will find a hidden path on the ground. When you do a path will open that will lead to a boss fight with the Royal Revenant. After defeating the boss you will gain access to a chest that holds the Frozen Needle.

The Frozen Needle is a great rapier that has some cool-looking fight animations. That said the rapier can also shoot a beam of frost damaging magic. It is a solid weapon for any player who balances physical attacks and sorcery.

2. Sword of Night and Flame

In order to get your hands on the Sword of Night and Flame, you will need to journey deep into Northern Liurina Lakeshore. Here you will find the Kingsrealm Ruins. To the North of these ruins is Caria Manor and here is where the sword can be found. Traversing the manor to find the sword is quite difficult so I have attached a video showing how to get there.

The Sword of Night and Flame allows the wielder to conjure up two types of magical abilities. It will let you conjure a flame slash that burns all the enemies before you and it allows you to create a sorcery blast of energy that comes out like a beam. It is easily one of the best swords in the game and is a great late-game sword. While most Katanas are technically two-handed weapons, this one is literally a one-handed sword. The Hand of Malenia is the hand of the boss Malenia. It is the one she reattaches in the trailer which wields her long Katana. Attaining the Katana requires a lot of steps but ultimately comes down to exchanging a Remembrance for a boss weapon at the Roundtable Hold to Enia the Finger Reader.

This weapon can be wielded single-handedly and has one of the most powerful special attacks in Elden Ring. When used the Tarnished will launch into the air similar to Malenia and begin to a flurry of midair slashes. These do a ton of damage and are capable of clearing out scores of enemies. It is without a doubt the coolest and potentially most powerful one-handed sword in the game.