Sometimes familiar is a good thing. 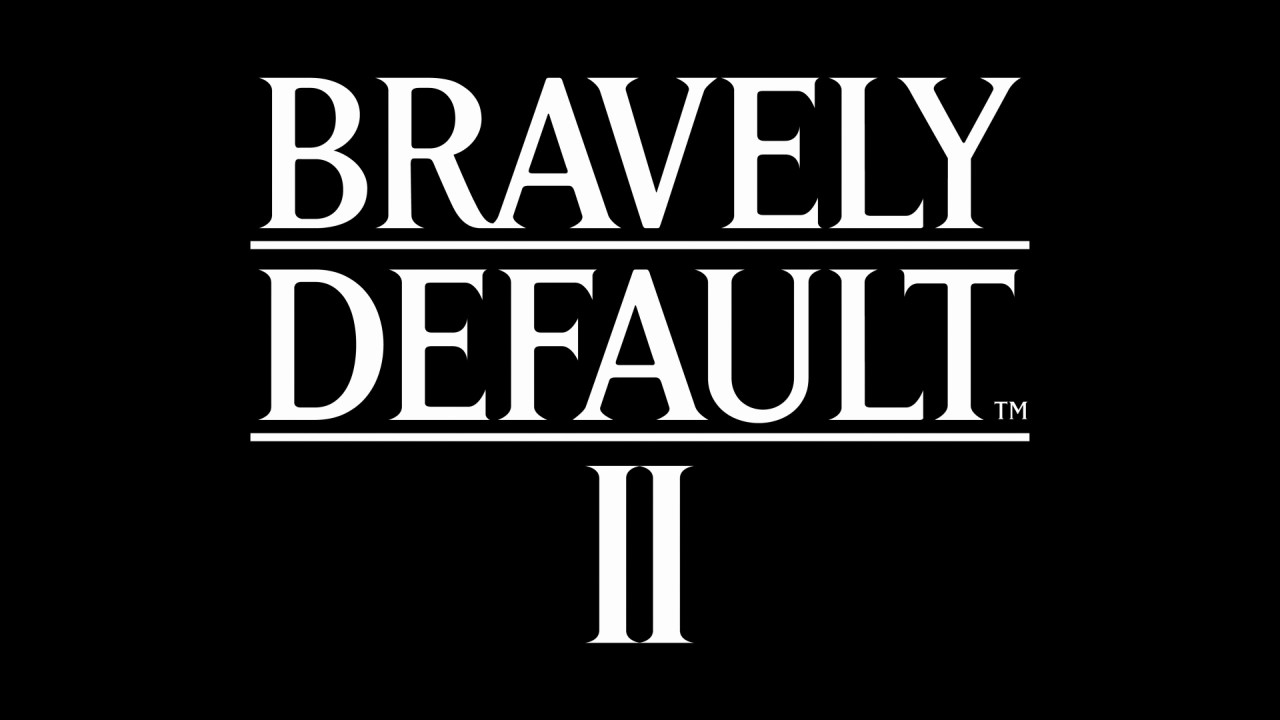 Bravely Default II is a follow-up to Square-Enix’s well received 2012 3DS RPG Bravely Default – well, technically the second follow-up. Confused? There was was direct sequel to Bravely Default titled Bravely Second, but Bravely Default II has adopted the Final Fantasy approach to numbered sequels. There is plenty here that returning fans will recognize, such as the titular combat system and the pursuit of world saving crystals. But, like a numbered Final Fantasy it features an all new world and cast, and this time around its arriving on the Nintendo Switch.

The demo starts off shortly after the main cast has been assembled. Seth is a shipwrecked sailor, Gloria is the princess from the fallen kingdom that once protected the world-sustaining magic crystals, Elvis is an annoying aristocratic scholar cut of the same cloth as the first game’s Ringabel, and Adelle is Elvis’ hired mercenary help. That’s pretty much all we’re given in this demo, and the brief slice of gameplay on offer doesn’t bother much with character building or storytelling. Bravely Default is as tropey as JRPGs come, and while that’s not a bad thing the true highlight here is the combat.

And, for the most part, it’s similar to the first Bravely Default. Friends and foes take turns attacking, casting spells and performing other traditional RPG actions, but what sets the Bravely Default franchise apart is the Brave/Default mechanic. Here you can bank or draw extra actions per turn, which can tip a battle wildly in your favor. If you opt to “Default” that character will guard for a turn and will earn a Brave Point (or BP) that can be used at any time to execute an extra action for that character, up to a limit of four actions per turn. You can also go a bit into debt if you wish, but that character can’t do anything until their Brave Point counter crawls back up to zero. 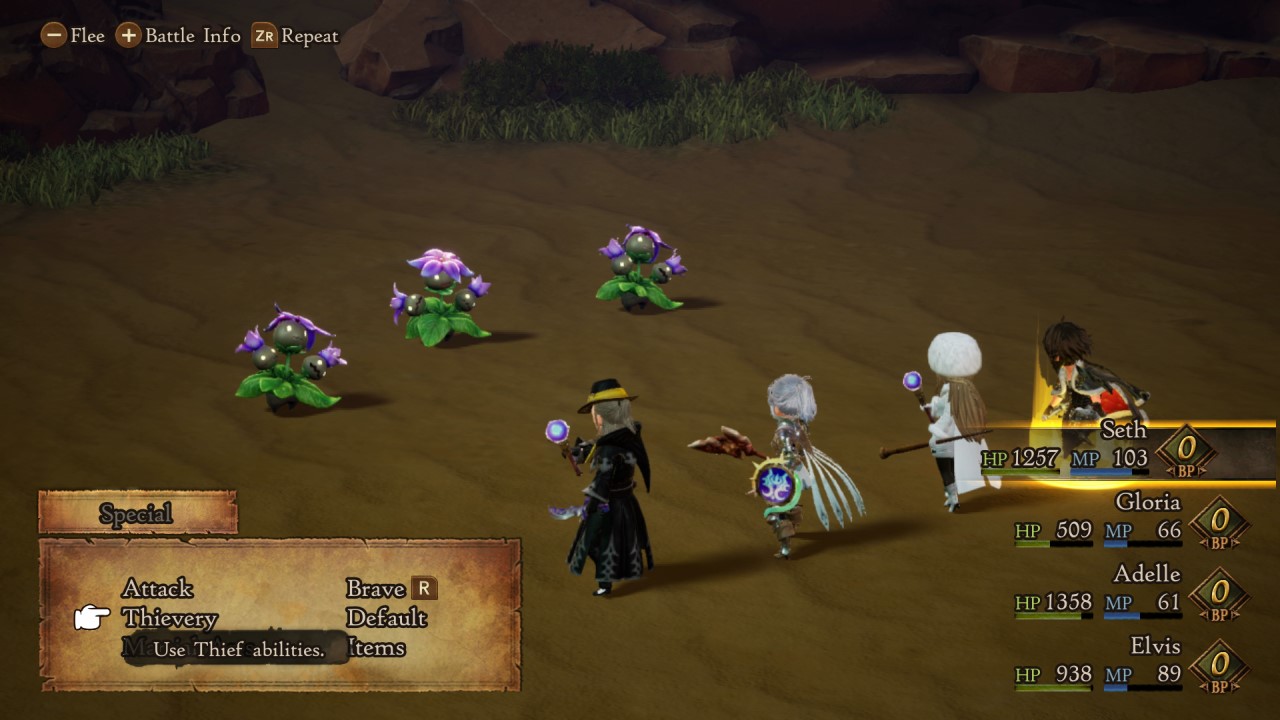 What this does is create a dynamic ebb and flow to encounters and makes grinding out levels easy, seeing as you are able to blitzkrieg through weaker opponents out of the gate by putting yourself into Brave Point debt without worrying about the fight lasting long enough to suffer the penalty. Longer fights require a more tactical approach, however. You can try and bank what Brave Points you can before unleashing royal hell, or be forced to take an extra action you don’t have the spare BP for at the moment in an attempt to resurrect and heal a party member. It’s a delicate back-and-forth, and your enemies are just as capable of Defaulting for a few turns before pummeling you into the dirt.

There is also a Job system in place, much like the ones Final Fantasy III (the actual III) and Final Fantasy V had. Each character can have a main job and a secondary job, but you’ll only level the main job through battle. Leveling jobs unlocks additional skills and passives that can be equipped, allowing for experimentation as you press through the campaign.

The demo has five jobs unlocked, with a sixth available after beating the one boss at the end. You’re able to tour around a major town, grind out battles on the world map (monsters must be physically engaged; no random encounters here), buy and equip new gear, and complete a single minor “dungeon” with a difficult boss fight at the end. And, boy, he doesn’t screw around. Even after grinding myself up to level 20 and maxing out two jobs per character he still managed to be a right pain in the ass, but once I figured out his general strategy he was far easier to take down. 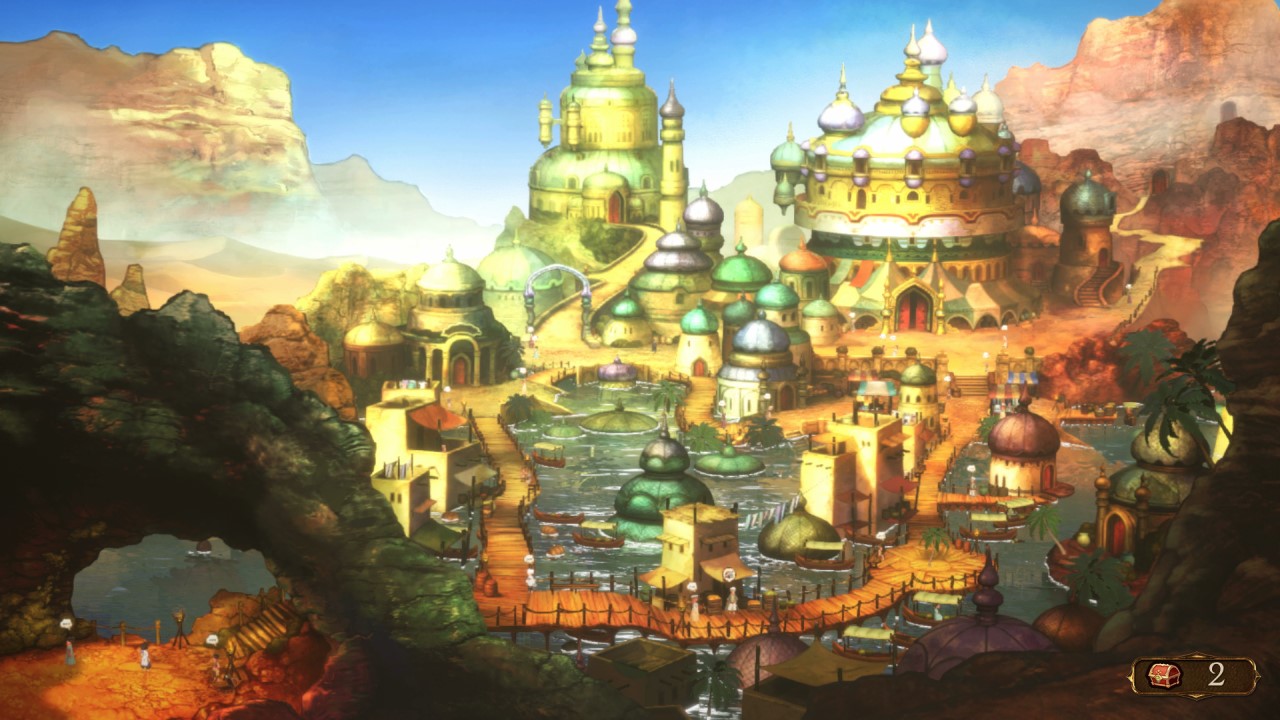 Bravely Default II is gorgeous in its own stylistic way, with an art style that reminds me of a children’s storybook by way of Yoshitako Amano, Final Fantasy’s long-standing concept artist. Though, in handheld it was obvious the anti-aliasing was disabled entirely, and the game took on a rough, jagged appearance. The frame-rate was also unstable, frequently dropping in the city or during battle. It’s nothing that can’t be ironed by launch, but performance is an early concern of mine coming out of the demo.

Fans of turn-based combat and old-school Final Fantasy games should give the Bravely Default II demo a look. It may lean a little heavily into the cutesy side of things and the story is unabashedly generic, but the core experience and dynamic Brave/Default approach to combat make it worth the download.

The Bravely Default II demo is currently available on the Nintendo eShop, with a full release scheduled for sometime later this year.