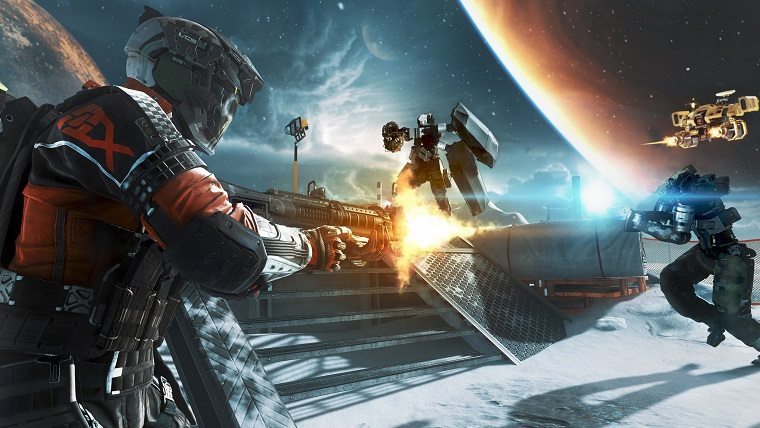 Infinity Ward has a lot to prove with Infinite Warfare. Ghosts (their last Call of Duty game) is considered by many to be one of the weakest entries in the series, and the reveal for Infinite Warfare was met with a level of outrage that was truly mind-blowing. The devs are taking the series deeper into the futuristic setting started by Sledgehammer’s Advanced Warfare whether the fans like it or not, but this beta proves that the fans that have been on board up to this point shouldn’t have too much to complain about.

In fact, if you’re one of the many who still play Black Ops 3 regularly then you’ll feel right at home in Infinite Warfare’s multiplayer. Infinity Ward hasn’t tipped the series on its head as many initially feared, instead providing a natural progression from what Treyarch delivered last year. This is still a fast-moving FPS where everyone’s sliding, thrust jumping and wall running all over the place, and Infinity Ward’s additions/improvements are largely under the hood this time. Also, Advanced Warfare’s air dashing remains absent from the basic move set, so you don’t have to worry about the insanity that that move brought to the table a couple of years back.

One of the biggest differences you’ll notice right off the bat is that Black Ops 3’s Specialists have been fleshed out further, resulting in what are now the more customizable Combat Rigs. Each Rig is tailored to certain play styles, and each one comes with 3 selectable Payloads (Specialist moves) and 3 Traits (perks). The Warfighter starts you off as your well-rounded Rig, but as you become more acclimated to the combat you’ll start experimenting with things like the Synaptic’s speed or the Stryker’s area control. You can also change up the appearance of your Rigs, which works similarly to Specialist customization in Black Ops 3.

The beta starts you off with 3 Combat Rigs and allows you to unlock an additional 3, and I like the variety that they add to the gameplay with their Payloads. While some boil down to offering you more powerful guns once your Payload meter fills up, there are others that are much more interesting. The Merc Combat Rig has a Payload that allows you to whip out a shield and barrel through anyone in your path, whereas one of the Synaptic Payloads literally allows you to transform into a robot dog and scurry through the level while pouncing at your opponents. These result in some very interesting combat situations, and were easily the highlights of the beta in terms of what was new.

The customization is further deepened with the new Prototype Lab, which allows you to essentially level up your guns via a mini skill tree. This is done by spending the new in-game currency called Salvage, which you’ll earn through regular gameplay. Each weapon has a Common, Rare, Legendary and Epic rarity level to unlock, which provide stat boosts on top of the usual weapon attachments and perks that the series has championed for years. They weren’t kidding when they said this was the most customizable Call of Duty yet, but whether or not this results in giving Infinite Warfare’s multiplayer the legs that Black Ops 3’s had remains to be seen.

From a mechanical standpoint, the Infinite Warfare multiplayer plays much more closely to Black Ops 3 than Advanced Warfare. Enemies go down very quickly no matter what gun you’re using, and movement speed feels similar albeit a little slower. The beta is currently offering a handful of maps and modes that are in rotation, and they’re all very much par for the course when it comes to Call of Duty. This isn’t a bad thing, though, as the maps available here are well-designed and allow for the several different play styles to be used adequately. Throwback is a current favorite, with its colorful setting and numerous buildings providing plenty of opportunities for close-range and long-range combat along with the added mayhem of the multiple Combat Rig Payloads. It’s also good to see the Defender mode back, which remains one of the better modes that the series has offered in recent years outside of the usual suspects of Team Deathmatch, Domination and so on.

In terms of the actual stability of the beta, this is where things get a little sketchy. The first day of the beta (October 14th) was an absolute bust, with the beta missing its scheduled launch by nearly two hours and then making it extremely difficult to get a match for the rest of the day. Things improved as the weekend went on, and (thankfully) once the matches actually started there were very few issues to speak of. It can still occasionally take longer than it should to find a match, but the several updates that the devs released since the beta’s launch have improved things greatly and hopefully this bodes well for the full release.

It may only be a beta, but your enjoyment of Infinite Warfare’s multiplayer will rely heavily on whether or not you enjoyed Black Ops 3’s multiplayer. Do you like fast-paced shooters where everyone’s sliding, wall running and thrust jumping all over the place? Great, because that’s what Infinite Warfare offers. Fans who were hoping for a different direction for the series will likely be disappointed by this, but everyone else will find that this is just the obvious next step and it seems to be turning out well so far.

The Call of Duty franchise continues to be a force year in and year out in the gaming industry and the latest is almost here with the upcoming Call of Duty: Infinite Warfare. While there was a lot of initial backlash against the game, the game’s closed beta is now here and it is without question pure Call of Duty in its gameplay, though the beta itself has had some issues.

My first experience with the beta itself was not good, as it was near impossible to find a match for at least the first day or so of the beta. Thankfully, this got better as the weekend went on, though it still took some time to get into a match. Hopefully this is something that will not be a problem when the actual game launches early next month.

The beta itself is pretty quick to jump into, with you getting to choose between the two most common Call of Duty playlists with Team Deathmatch and Domination, as well as the fan favorite Gun Game playlist that was added after the initial beta launch. There is also a mixed one that randomizes between these. By not limiting the beta to just Team Deathmatch or Domination, this really gives players a taste of the majority of what they can expect in the full game, which I really appreciated and enjoyed.

Before actually playing, you must also pick from one of the new combat rigs that you want to use first, with each providing their own pros and cons. The Synaptic was my easy favorite due to its level of mobility, but the Warfighter’s Persistence trait had me switching between the two quite often. There are three at the start, but three more available upon leveling up, just like in the full game.

After dealing with all the pre-game stuff, actually getting into the matches is what I was most excited for. The beta is obviously limited with only four maps at this time, three of which were available at the start, but so far I was really enjoying the maps they provided. Frontier is my favorite of the bunch, as it is the most constricted map of the bunch, where you are stuck in a space station in fairly tight quarters. Every time someone dies their body floats due to the lack of gravity, which is a nice touch that is added in.

For the most part, the gameplay isn’t really drastically different in core gameplay from what you would expect to have played in either of the last two years with Call of Duty: Black Ops 3 and Advanced Warfare, but it still manages to feel like a natural progression of the series with this futuristic setting. If this beta is any indication though, I know I’ll be sinking way too many hours into this game once again.