The latest news in the world of video games at Attack of the Fanboy
September 2nd, 2016 by William Schwartz 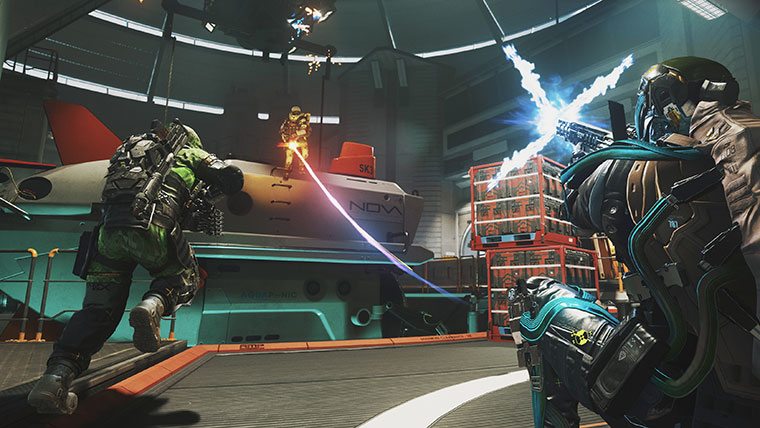 Call of Duty: Infinite Warfare didn’t get off to the greatest start earlier this year.  Campaign footage released on YouTube revealed a brand new setting for the franchise that polarized gamers.  Garnering the most dislikes of any video ever uploaded to the service, fans weren’t quite sure what to expect from this year’s Call of Duty.

E3 came, and Infinity Ward quelled some of the concerns from fans by showcasing some new single player gameplay.  While the single player experience for Call of Duty games over the last decade have been nothing short of fantastic, praised for their bombastic nature and movie-like production values, multiplayer has long been the aspect of the game that keeps fans and players engaged for the entirety of the year.

This week at Call of Duty XP, Infinity Ward and Activision reveal the multiplayer aspect of the game and we got a chance to go hands-on.  For full disclosure, Activision paid for AOTF to travel out to Los Angeles for the event.  For myself, there’s been some level of excitement around the reveal of this year’s multiplayer.  I’m certainly the type of player that focuses on multiplayer, plays the game year-round, and has enjoyed the last two games in the series significantly.

Infinite Warfare continues the trend that was established by Sledgehammer Games

Infinite Warfare continues the trend that was established by Sledgehammer Games for Advanced Warfare and Treyarch with Black Ops 3 in that they’ve gotten more time to work on this game on a three-year dev cycle and it shows.  Infinite Warfare, like the last couple of games to release on ‘new-gen’ consoles, looks amazing on the PlayStation 4.  While not instantly recognizable due to a shift in the setting for the game.  Call of Duty fans will instantly slide into Infinite Warfare, those that spent a lot of time in Black Ops 3 perhaps more so.

A lot of Infinite Warfare is a persistent carry-over from Black Ops 3.  Things have been renamed, but the underlying systems seem largely the same in terms of gameplay and customization options.  A focus on deeper progression and a new crafting system seem to be the freshest aspects of the game.  While that may sound like a “here we go again” scenario for Call of Duty.  Black Ops 3 was a pretty impressive Call of Duty game, many point to as the best to arrive on this generation of consoles.  Reusing some of these systems isn’t horrible, so let’s get into what’s changed. 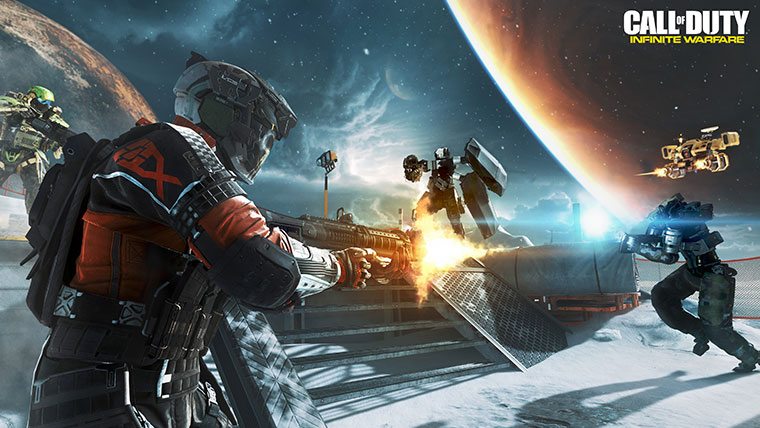 Combat Rigs take the place of Specialists this year.  Rigs can be outfitted with Payloads.  These payloads can be in the form of a weapon or ability.  It definitely feels like the same sort of system that was introduced with the Specialist.  Play the game, earn points, and a meter fills to use this ability in-match.  Like Black Ops 3, the Payloads must be used carefully as getting killed while using them will waste it.

Alongside the Payloads, each Combat Rig also has traits that accompany it.  These traits are persistent abilities and perks that buff each character.  In-game, Infinite Warfare does feel familiar to Black Ops 3 in using these new abilities.

The movement system also feels lifted from Black Ops 3.  Wallrunning and boosted jumps return and it rounds-out the gameplay experience to feel like something that hasn’t changed all that much.  The action is fast and frantic, with players using these new payload abilities and traits which are mixed and matched in a way where matches can feel quite different depending on the Combat Rigs set-ups that are chosen.

Class creation is multi-layered in Infinite Warfare.  Under the new Combat Rigs is a standard Create-a-class.  Which features some new weapons that you’ll be using more often than the specials that each character has.  Guns include both ballistic weapons and new directed energy weapons.  Ballistic weapons are going to be futuristic takes on modern weapons, while directed energy weapons are the most different guns you’ll find in the game.  They feature new damage mechanics and ammunition regeneration highlight the functionality of these new firearms. 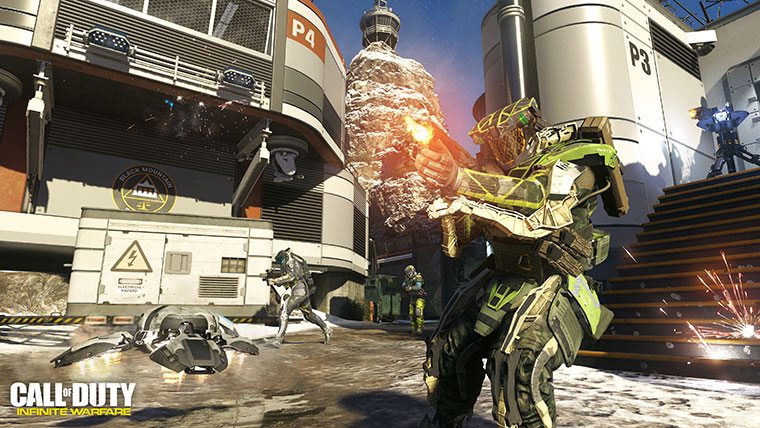 Much of what else you’ll find in creating a class is going to feel familiar.  A lot of weapons and perks will feel samey, while others are entirely new.  A bubble shield was one of the highlights of the new tactical weaponry.  While, new explosive grenades and spider drones were interesting additions to the lethal category.  We didn’t get a chance to delve into the new score streaks of the game, but there appears to be a good mix of new takes on the familiar and some brand new additions.

On the map-side of things, Infinite Warfare feels different in terms of aesthetic.  The far future setting certainly introduces us to locations that we’ve not seen before and gives IW some room to create imaginative layouts.  The core of Call of Duty still shines through.  Varied design, high replayability, and layouts that funnel players into combat quickly are familiar to players who’ve been playing the last few iterations of the shooter.  Modes are going to be familiar as well.  We were shown some fan-favorites in Infinite Warfare:  Team Death Match, Domination, Kill Confirmed, Capture the Flag, Search and Destroy, Search and Rescue, Free-for-All, Drop Zone, Infected, Grind, Demolition, Gun Game, Reinforce, Hardpoint, and Uplink return to the rotation.  While newcomers like Defender,  a high stakes game of keep away where teams must collect and control a drone, are introduced in IW.  There’s also a new mode called Frontline that will be in the game, but we did not have a chance to play it or get details on what it is.

Many of the progression elements for Infinite Warfare are still somewhat under wraps, and it’s unclear on how they’ll impact the game.  Extrapolating the systems that were introduced with Black Ops 3, COD currency, and the popularity of unlockables, it’s probably safe to assume that Infinite Warfare’s new crafting system will be somewhat similar in nature, while making it’s own mark.  IW will give players a couple of different progression paths when it comes to multiplayer.  While it wasn’t said outright, players will earn salvage by playing the game, this salvage can then be used to craft ‘Prototype Weapons’ that have gun perks attached to them.  Salvage will come in four varieties which range from common to rare, and the types of prototype weapons you can create will be tied to the salvage type that you have collected. We did not get to see crafting in-action, but were described some different types of weapons that you could expect from the crafting system.  Examples were given to us of a common weapon that might have a perk that allows for additional ammo capacity, or abilities such as the option to enact a tactical nuke if a certain score streak was achieved.  ‘Epic Weapons’ would be variants of normal weapons with unique traits.  We were told a ‘Machete Shotgun’ could be crafted that allowed players to use the gun in close quarter combats as either a melee weapon or firearm. 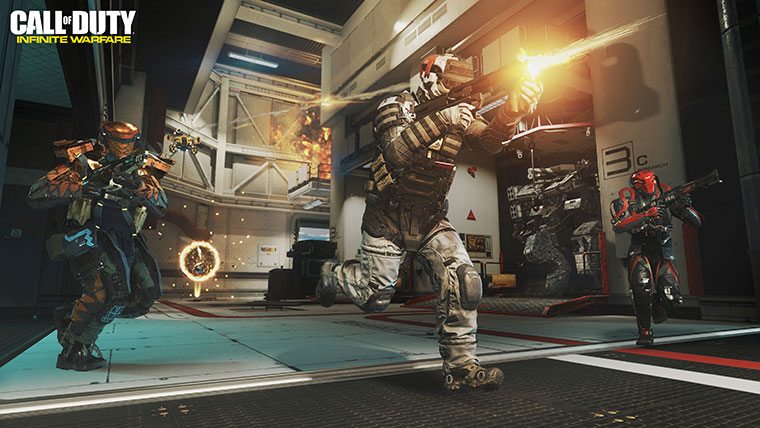 Alongside this new crafting element was a Mission Team progression/objective system that allows players to earn exclusive unlocks in the game.  We were shown a handful of different Mission Teams, each led by a commander which issues objectives to be completed.  This can range from a certain number of kills in a game mode to any number of different tasks to be completed.  These exclusive unlocks that are earned can be a number of things — camos, rigs, prototype weapons and more.  The thing to note here is that there is no chance involved, so players won’t need to rely on RNG to get a certain item.

Walking away from Infinite Warfare it was somewhat of a relief to see that Infinity Ward didn’t stray too far away from home with this release.  Continuing to build on the systems that were implemented in Black Ops 3, Infinite Warfare feels like another rock-solid shooter experience from the Activision’s Call of Duty stable of developers.  With only a small sample of gameplay and still months to go ahead of release, it’s hard to pass judgment on the game.  The takeaway, however, is that the outrage shown earlier this year may have been misplaced as Infinite Warfare doesn’t feel like quite the deviation from previous games in the series that fans made it out to be.