Hands-on from PAX East with the follow up to Minit 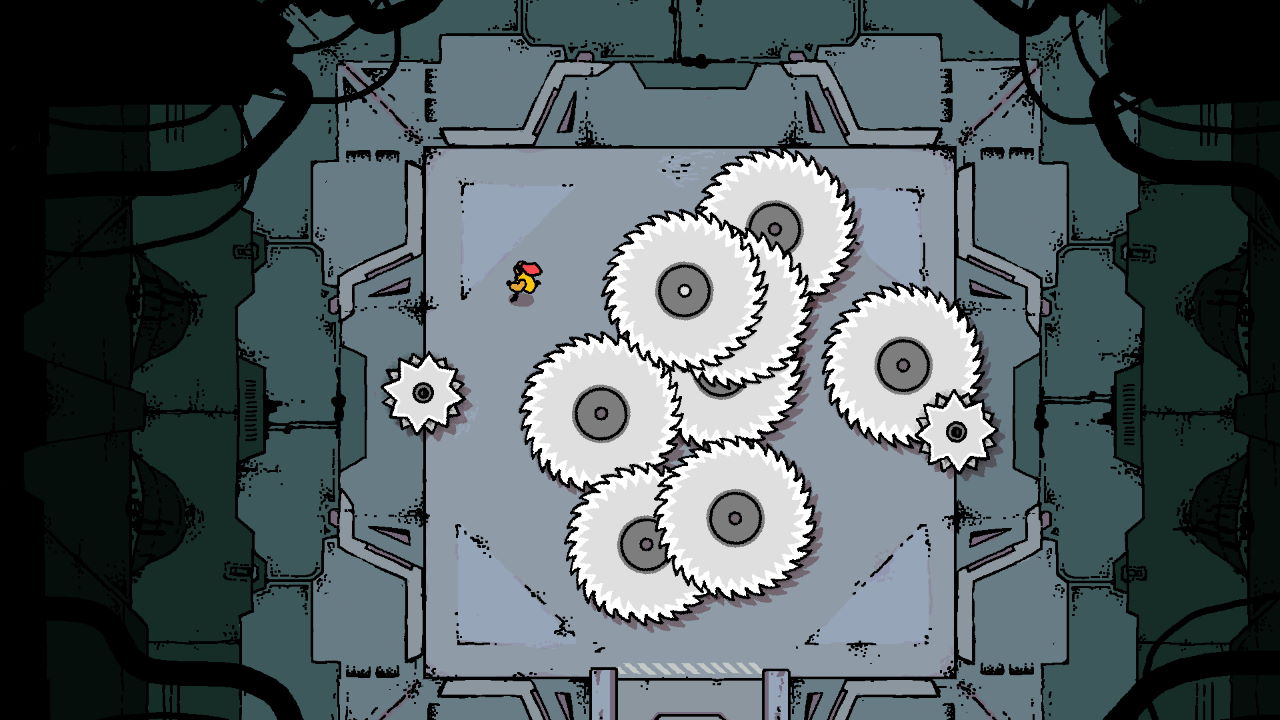 You’re in a locked room full of sharp, spinning discs. In a normal video game you would dodge them long enough to unlock the door or solve whatever puzzle will do so. In Disc Room that’s completely wrong. Death is how you progress in this adventure puzzle game from the makers of 2018’s hit Minit, but almost never in the same way you think or how it happened before. At PAX East 2020 I got to go hands-on with Devolver Digital’s recently announced game, which delivered great puzzles mixed with some really intriguing design possibilities.

In Disc Room you play as an astronaut seeking answers after a mysterious object is discovered in orbit around Jupiter. Yes, the game wears its 2001: A Space Odyssey inspirations on its sleeve, and it is all the better for it. In fact, there’s a bunch of scifi movies that it pulls from including a personal favorite: Cube. If you’ve seen Cube you may quickly get a sense for how this game is going to work. You enter the mysterious object, find yourself in a locked room, and from there almost anything can happen.

Every room features various types of spinning, bladed discs. Your job is to figure out how to use them to unlock the doors blocking your path. Your goal is clearly marked for you though, so what’s the challenge? Well your goal could be “survive 10 seconds” or “die from two different types of disc”, both of which offer their own unique challenge. Surviving is already hard, but just doing that doesn’t open the door, you then have to die to cement that solution into place. And if you can die to a different type of disc than has killed you before, all the better. You just got closer to completing another objective which will unlock another door which will lead to another room in which you can die another death.

Picking up Disc Room for the first time, you will almost certainly try to survive as long as you can in each room, but this will yield little results. In most games when you die it’s a bad thing, but in Disc Room that is how you progress. You can solve the puzzle, but until you die from something in the room, the doors will remain locked. Once you do you can quickly and easily pick which room to spawn in, allowing you to traverse to a newly unlocked door with ease. The philosophy might seem familiar if you played Minit, where there’s nothing standing between the player and the gameplay. You jump in, solve some puzzles, dying repeatedly as you do, then you can stop and pick it up later without much hassle.

For this demo there were a few rooms with somewhat simple tasks, such as finding unique varieties to disc to let kill you, with lots of different types to see such as big and slow, ones that spawn their own smaller discs, or ones that target lock right onto you which you have to dodge. After facing them all there is a room featuring a boss of sorts. With a gigantic disc that spawns a multitude of still big threats. Survival is the key to defeating him, but you also have to have the movement mechanics down, as you have to collect objects that deal damage to it. Once defeated a cutscene will play hinting at further story development deeper into the game.

Disc Room is one of those games that doesn’t garner many headlines but will surely be a favorite for lots of players. Like Minit before it, it is finely tuned and crafted to deliver intense, focused gameplay that allows for easy pick up and play. The demo didn’t show off too many tough puzzles, but combine simple puzzles with the ever present spinning blades of death and you have something quite thrilling. Then tack on that you have to die to deliver the solution and all of your gaming instincts mix together into a weird jumble of anxiety, confusion, excitement, and eventually adulation. Keep an eye out for more on Disc Room as it heads toward release later this year.