Last week in Dragon Ball Super, we finally knew the identity of Black Goku. Now this week, the evil duo of Black and Zamasu further explain their plan.

As revealed last week, Black Goku is Zamasu who has stolen the body of Goku. However, everyone including Goku is confused. Who exactly is the Future Zamasu that is standing next to Black Goku?

The Future Zamasu is Zamasu from Trunk’s timeline. As for Black Goku, he is another Zamasu from a different timeline that has made his mind into the body of Goku. He just discarded his own body and swapped it with Goku.

The Time Ring that Zamasu possesses means that Beerus’ attack means nothing to him. Anything that happens to him in the past doesn’t affect him. This is why he’s still alive and time was not changed.

It’s said that only Supreme Kais can use Time Rings which is why Zamasu was so motivated to kill Gowasu. With Gowasu out of the way, he was able to use the Time Rings freely.

The time for talk is briefly over as the deadly duo attack the heroes. The fighting is not very easy as our heroes still struggle to fight the immortal Future Zamasu. No matter how much damage they do, nothing affects him. Black Goku then explains how he met Future Zamasu. He explained to him his identity and how he hates mortals too. He used the Time Ring to go to Future Trunk’s timeline and that Future Zamasu liked his plan. Gowasu is again killed in this timeline.

It’s a little confusing about the timelines and stuff, but if you watch The Flash, you might understand how things might work. New timelines are always being created when different events happen. This in turn means different versions of the same character may still exist when they crossover. It’s hard to explain in words, but let’s just focus on the rest of this new Dragon Ball Super episode. I’ll just say there is another timeline out there where Goku and the others weren’t warned of Zamasu’s plans. This is the timeline where Black Goku is from.

Anyway, the two wished for the Future Zamasu to have immortality and to stop anyone from preventing their zero mortals plan, they then wished for the Super Dragon Balls to be destroyed. To further prevent people from stopping them, they killed all the gods from every Universe. Their plan is to pretty much kill every mortal since they hate them.

They killed a lot of people from many Universes, but they left Earth till last. This is because Earth is the worst place of all in their opinion. They feel the worst mortals of all time have lived on Earth.

The fight continues on and Black Goku admits to Goku he did something very terrible. In another timeline, he sees Goku, Chi Chi and Gohan. Before the three can do anything, Black Goku kills them all. Goku was inside Zamasu’s body at the time.

Goku gets angry over this story. Sure his own family is safe (for now), but it’s never nice to know that your family has died in another timeline. Again if you watch The Flash, Barry Allen gets upset when his friends and family members die in other Universes or timelines. 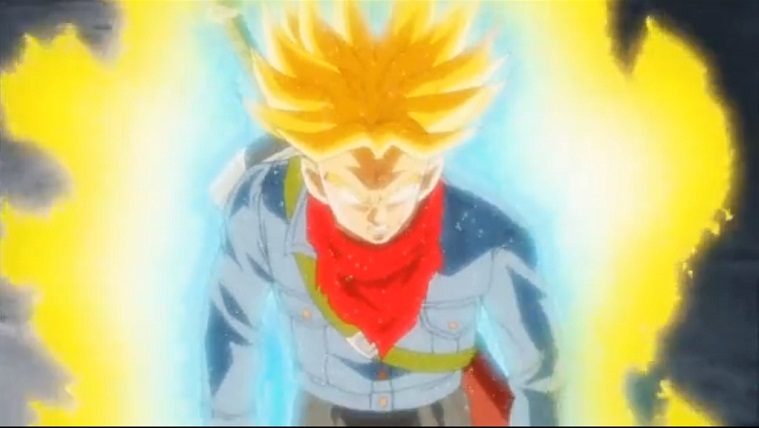 Even though Goku gets angry, this is not enough to overpower Black Goku. Black Goku is still way too strong. Trunks wants to fight Black Goku next, but Vegeta thinks he’s too weak right now.

They say that Goku should have died from the heart virus, but Future Trunks intervened. Because of this intervention, they claim that Future Trunks is responsible for creating Black Goku. Black Goku wouldn’t have been created if Goku was still alive. You have to admit, the baddies make a good point here…

The taunting makes Trunks very angry and we see him transform into a Super Saiyan form we have never seen before in Dragon Ball Super. You can see the screenshot above. It has both a blue and yellow aura and Future Trunks has white eyes. Will he be strong enough in order to beat the tag team of Black Goku and Zamasu?

Episode 61 of Dragon Ball Super introduced us to a lot of backstory and featured some decent fights. The timelines can get confusing, but we hope to give you some explanation towards it. Join us next week for our views on episode 62.