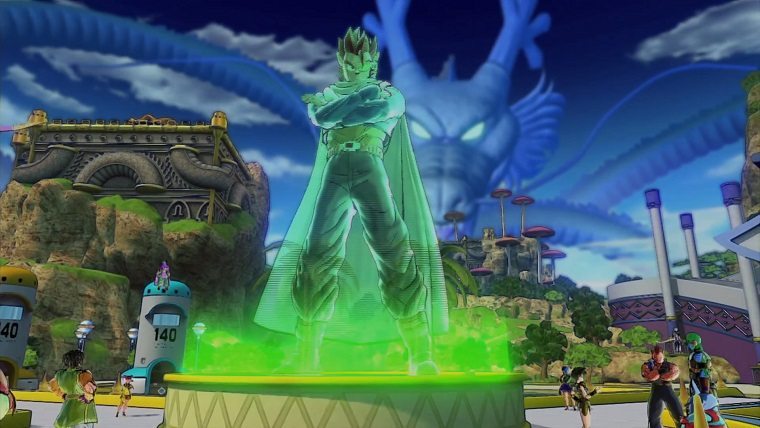 Later this month will see the release of Dragon Ball Xenoverse 2, which is the follow-up to the bold new take on the Dragon Ball video game formula that launched a couple years back. While that game offered a nice change of pace for the series, it definitely had its fair share of problems that held it back from truly reaching greatness. The beta for Xenoverse 2 will be our first taste of finding out whether or not the developers have been able to address the issues with the first game, and my experience with it so far has been fairly positive.

Let me get this out of the way first: if you were expecting a massive change with this sequel you are going to be disappointed. Instead, Xenoverse 2 offers more of what the first game did, though in bigger and better ways. One of the hallmarks of the first game was its in-depth character creation feature, and that is back in full force here. You can play around with all sorts of different character faces, hair styles and so on to insert your creation right into the action with other Dragon Ball icons, and there are once again five different races to choose from. The game’s RPG elements also ensure that you can fine-tune your characters abilities to your preferred play style, with plenty of gear, skills and stat upgrading to keep you engaged.

The hub world has also gotten an upgrade, as the first game’s hub of Toki Toki City is dwarfed in size by this game’s Conton City that is 7 times bigger. It’s also very well-designed, with the game’s improved visuals over the first making the vibrant city really pop and feel right at home in the Dragon Ball universe. It’s great that it can hold up to 300 players at once now, which will be cool to see once the game has launched and a lot more people are actually playing. The fact that the hub world isn’t divided up into sections that require loading times to get to each is a big plus over the first game, as well.

The main attraction, of course, is the story and combat. For the uninitiated, you are essentially tasked with joining up with heroes from the Dragon Ball universe to stop the bad guys from altering the events of iconic moments in the series’ history. This results in you taking part in battles that span the series’ entirety, with dozens upon dozens of characters (both good and bad) making appearances throughout the journey. Gameplay is frantic and fast-paced, and soaring through the air firing Ki blasts or Kamehameha’s amidst a flurry of light and heavy attack combos is a lot of fun. Also, witnessing a character of your creation wrapped up in a Dragon Ball scenario still hasn’t lost its appeal.

The problems that some had with the big boss characters from the first game do not appear to have been fixed, though, as an early battle with Ape Nappa and Ape Vegeta was slow and clunky. They have an added defense meter that has to be whittled down so you can grab their tails and smash them to deal actual damage, but the process is so slow that the battle becomes tedious very quickly. These battles overall aren’t nearly as fun as ones featuring all normal-sized characters, and hopefully are kept to a minimum in the full game unless others manage to feature a bit more finesse and variety.

Battles with multiple characters participating on each side is where the game truly shines, as the sheer mayhem is eye candy. As long as you’ve got a group of decent players with you, teaming up to take on another group of players is a lot of fun as you coordinate attacks to lay down some deadly combos. You once again build up Ki to launch special and ultimate attacks, while also dodging and counter-attacking. Lots of ground gets covered in a relatively short amount of time, and the game’s engine is able to handle it well with the frame rate not taking any noticeable hits. The servers during my testing of the beta also seemed fine, as I experienced no disconnections or even that much lag.

However, the biggest problem right now seems to be with the ally AI, as there were several situations where AI characters on my team just stood in place and didn’t contribute to the battles at all. A hit from an enemy might snap them out of it, but for the most part it was just me fending for myself in an unfair battle. Enemy AI is a lot better, however, providing plenty of challenge to keep things interesting. Hopefully the ally AI problems are just a beta issue, but it’s something to keep an eye on.

The beta for Dragon Ball Xenoverse 2 definitely shows some improvements over the first, but there are spots where I’m a little skeptical. It’s seeming like there still might be some problem areas with the sequel, but we’ll just have to wait and see with the complete game. There’s also several features that are either limited or locked out completely in the beta, so it’s still possible that the remaining content can pick up some of the slack when it becomes available later this month.