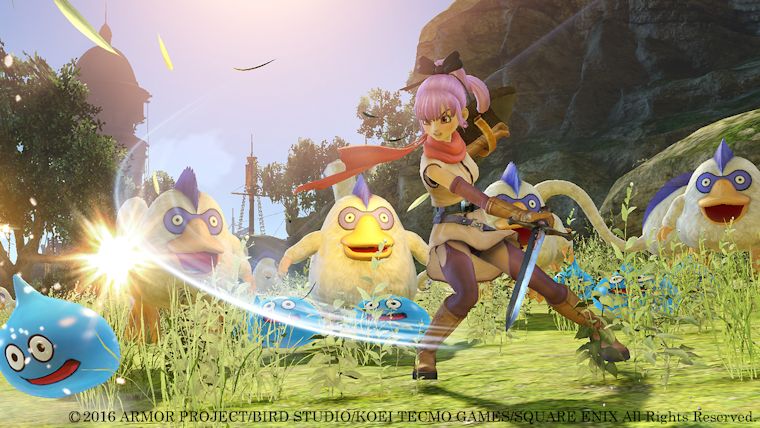 Dragon Quest Heroes: The World Tree’s Woe and the Blight Below originally released more than two years ago in Japan before getting a release in the US later in 2015. This spinoff of the popular RPG series took the world and characters that everyone loves about Dragon Quest and combined them with the musou style of games that developer Omega Force has been known for. A follow-up to the game was released nearly a year ago in Japan and now we are finally getting a release in the US, with us now getting a little taste with a demo release of Dragon Quest Heroes 2.

Square Enix has been quite good with releasing demos for its games over the last few years, including last year’s Dragon Quest Builders, and the latest demo is for Dragon Quest Heroes 2 that is fairly short, but still very enjoyable.

Rather than bother with any story setup or anything, the demo for Dragon Quest Heroes 2 puts you right into the action as you are outside of the town of Harba in the Greena Pastures area. This seems to resemble a more classic Dragon Quest world map than the one in Dragon Quest Heroes that was more individual quest based, so that should be even better in the full game.

Starting out, you get to move forward and get a few instructions with the controls, though most of them are listed on the bottom of the screen. This is likely just there for the purposes of the demo to give an idea, but it is helpful.

In this area you will come across a number of different enemies, including Slimes, Candy Cats, and Platypunks, the last of which are one of the more uncommon creatures in the long running series. Hopefully this is a sign that this game will branch out even further with the enemies that you’ll be facing as we’re already seeing one that isn’t used as often.

Fighting these enemies is similar to the first game, but it feels even smoother here. You have a party of four characters to use, each with a different weapon type and skill set that you can switch back and forth between, though this can take some getting used to in the heat of battle. Pressing Square will allow you to do your light attack while Triangle uses your heavy attack, with you able to combine the two together.

Each character also has four abilities that they can use that uses up your MP, which are used by holding down R1 and then pressing one of the four face buttons. These attacks definitely help in battle, with strategy playing a big role in switching between characters as your others are able to recover MP between using abilities.

Like the first game, you can also collect medallions from certain enemies that will allow you to summon them in your place to use in battle as well. I personally only came across two of them in my time playing the demo, so don’t expect a ton of these.

Essentially, the demo only has a few objectives to complete as you fight through the enemies in Greena Pastures. Before long, you’ll come across an NPC that is surrounded by enemies that you need to save. After saving him, he’ll mention that you can go to an area to fight a bigger creature. Upon following his instructions, you will come across a somewhat mini-boss against a Hood in a closed arena.

Following that battle, you can face the big boss of the demo known as Night Clubber, which will take a little while to take down, but shouldn’t be too hard. Having the regular fights as well as these two fights that feature scaling difficulty is definitely a good way to help introduce people to the game without giving too much away.

There is more to explore if you want to, such as a decent fight against a Golem. Doing this will allow you to level up more that might help with Night Clubber, though he can be handled at a very low level as well. The level system is definitely not something that matters much in the demo, but it will be much more important in the full game.

Dragon Quest Heroes 2 will be releasing on April 25 for PS4 and PC and we can’t wait to get our hands on it after getting to try out the demo. A Nintendo Switch version also released in Japan at the launch of the new console, but no US release has been confirmed as of this time.