The Elder Scrolls: Legends Preview – More Than A Hearthstone Clone 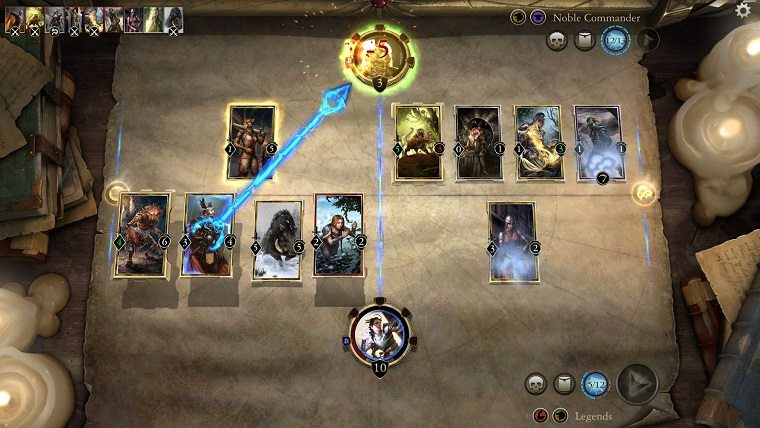 The Elder Scrolls series probably wouldn’t be the first series that you would think of when picking an established IP to branch off into a completely new genre like a CCG, but that’s exactly what Bethesda has decided to take a risk on with The Elder Scrolls: Legends. Tossing aside the main series’ open-world RPG adventures (and, more recently, the MMO endeavors of the maligned The Elder Scrolls Online), the publisher has enlisted Dire Wolf Digital to brings the series into Hearthstone territory and give the competition a run for its money. While the game wears its influences on its sleeve, it definitely has the potential to share gaming space with the other titans of the genre.

Let’s get this out of the way right off the bat: The Elder Scrolls: Legends is a lot like Hearthstone. You face off against one other opponent as each of you battle in turn-based combat to whittle down each other’s HP, while also taking out the deck of diverse cards that each character holds. Each card costs a certain amount of mana (called magicka here) in order to send into battle, and each card has offensive and defensive stats that will determine the outcome of any particular match up. If you’ve played Hearthstone before then it won’t take you too long to get into the swing of things.

However, that’s not to say that Dire Wolf Digital doesn’t do some interesting things with the formula to make the game stand on its own. The biggest difference that you’ll notice is that the majority of battles take place on two lanes, splitting your deck of cards into to two possible areas of attacking. Cards that are in one lane can’t attack cards in the other, and putting too much focus on one can leave your character open to potentially big attacks. One of the lanes (the shadow lane) even comes with its own rules, as it hides cards in that lane for one turn and protects it from being attacked immediately.

While this might seem like a pretty basic tweak at first, it actually results in some pretty big changes to the gameplay. Each battle requires a little more thought than Hearthstone, as you’re juggling two different squads of cards to try and break through and defeat your opponent. The familiar character specific stat boosts and bonuses will also come into play, meaning that placing the right cards can potentially quickly damage all enemy cards or boost all of yours. These two different lanes require different strategies due to their accompanying rules, and it adds a nice twist to the gameplay that gives it a vibe closer to a game like Clash Royale.

This is heightened by the new rune mechanic that Legends brings to the table, which allows you or your opponent to draw a card each time 5 damage is dealt. These can be cards that you’ll end up summoning on your next turn to potentially even things out, but where things get really interesting is with the prophecy cards. Prophecy cards can only be acquired through a rune break, though they can be played as soon as that happens during your opponent’s turn. This can cause a massive momentum shift in a powerful attack string, as if your opponent has a lot of attacks lined up in a lane and you draw a powerful guard card then you can prevent them from dealing anymore damage.

Lanes and runes add more layers to the Hearthstone formula, giving The Elder Scrolls: Legends a vibe closer to a game like Clash Royale

These interesting new mechanics are wrapped up in a presentation that is very much what you would expect from a spin-off Elder Scrolls card game. The game features a bare-bones story that has you trying to stop an evil character from performing an evil ritual to destroy everything, and the characters involved are very cookie-cutter and bland. The voice acting is also pretty cheesy, with characters regularly going overboard throughout any average conversation. This is presented throughout a single-player campaign, and despite not featuring the greatest of stories it still presents some interesting gameplay scenarios where you have to make decisions at important narrative moments. These will result in you getting one of the potential cards offered, and the fact that the game gives you the choice to decide how you’ll build your deck throughout the campaign is pretty cool.

Despite the writing not being great, the game’s style and animations are definitely much better. Many of the game’s cards feature artwork that is extremely impressive, featuring various characters and creatures throughout the many different races in the series. The effects that these cards create while using them in battle are also solid, with flames, lightning strikes, explosions and other dramatic visual cues making the card battles much more aesthetically appealing. while some have complained about the brown color scheme that the game’s main playing background has, I actually like it due to it making it feel like you’re really sitting down to take someone on in a flashy game of cards. 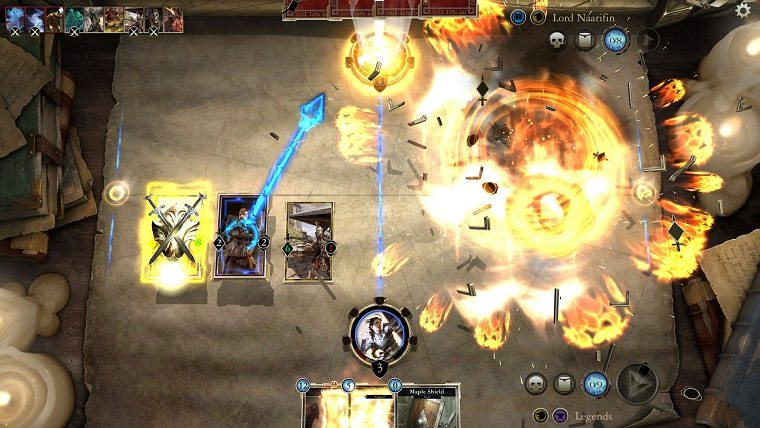 Deck building is, of course, a major component when it comes to being able to take on the increasingly challenging opponents. You’ll unlock new cards and upgrade your current ones as you level up, which you can add to one of several different decks that you’ll possess. Certain decks come with certain stat advantages like strength or magic, which is something that needs to be considered prior to taking on an opponent. Decks generally call for around 50 cards to be on hand, and you’ll regularly be switching out old ones for new ones after each match. The UI could be a little smoother in sorting all of this out, as the task of implementing new cards into a sizable deck can be a little daunting at times.

Outside of the traditional one-off battles come the marathon battles of the arena, which tasks you with taking on multiple different opponents on your way to taking out the final boss. If you die 3 times then you have to go back to the beginning, and you create your deck on the fly via a randomly-generated list right before you kick things off. It’s a really cool mode that we’ll need to see more of as it’s still in the early goings, but it’s definitely solid so far as it offers a more streamlined experience. Both modes allow you to take on live opponents, as well, which is definitely where these kinds of games truly shine.

Seeing as this is still in beta form and there is more to come for the game going forward, the final verdict on The Elder Scrolls: Legends will have to be put on hold for now. While many have been writing it off as nothing more than a Hearthstone rip-off, I think fans of that game that are open to trying out something new will find a lot to like with this game. Bethesda is definitely taking a risk in releasing a spin-off to a series when all fans really want is a main sequel, but it’s working out well so far.