Fallout 76 Wastelanders is a Step in the Right Direction 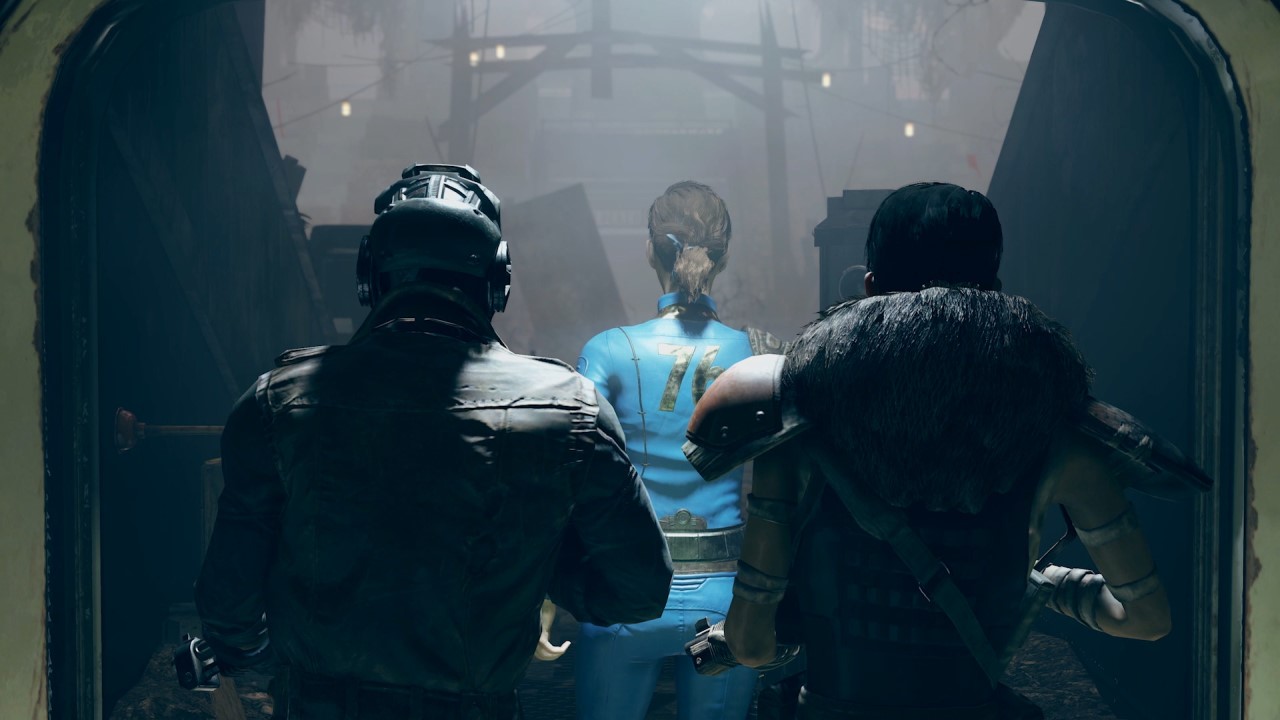 Duchess has a problem: treasure hunting raiders are making her life hell and ruining business at her bar, “The Wayward”, and she would like me to deal with them. I opt to assist her after picking her brain a bit, and head on out to rid Appalachia of some raider scum. I’m given two optional objectives, but I’m a man of action! I don’t have time for piddly side-quest bullshit.

I head straight for the bandit camp, where I’m stopped by a giant gate. I call up the gatekeeper via intercom, who promptly asks me for a password. Turns out I would have learned it had I done that “piddly-quest bullshit,” but I see I have enough Luck to guess the password.

And, what do you know, my idiot response worked. For Fallout 76 this event felt revolutionary, and in its latest update, Wastelanders, it’s one I’ve repeated a half dozen times. Humans have finally begun to repopulate the hills of West Virginia, and it’s made the post-apocalypse a substantially less lonely place, though some of the game’s underlying flaws tend to flare up and hamper the fun. 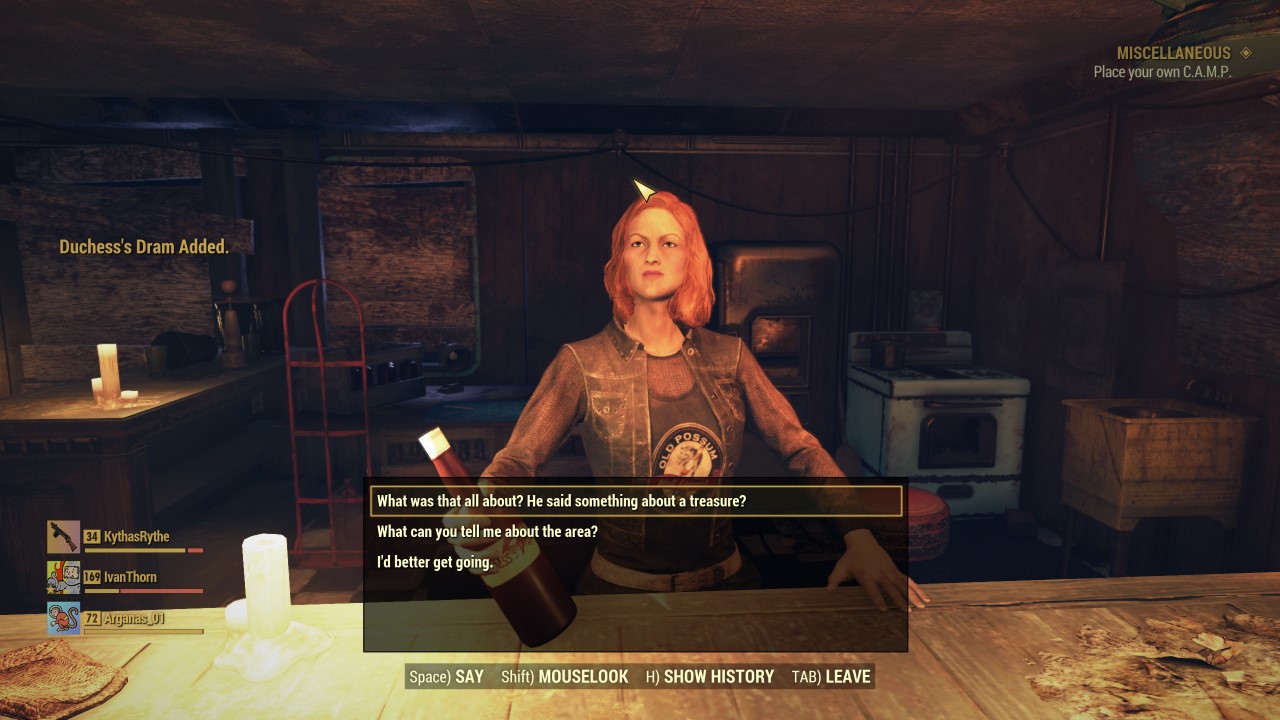 Fallout 76 Wastelanders introduces humans to Appalachia in a couple of ways. The most obvious additions are the two factions a new main quest line will task you with assisting, though you’ll eventually have to side with one. The bandits are former residents returning to reclaim what they believe to be their land, and the Settlers are construction workers from Washington D.C. looking to rebuild from the ashes of civilization.

Both are keenly interested in a hidden “super treasure” buried somewhere in the hills, and it’s your task as one of Vault 76’s former residents to assist them. The quests themselves are familiar archetypes, but the included dialogue checks spice things up. Instead of opting for Fallout 4’s more divisive dialogue system, Fallout 76 Wastelanders instead returns to the more open-ended system found in both Fallout 3 and Fallout: New Vegas. Your character is a mute, but what is written on the screen is what you are saying, and NPCs respond accordingly.

There’s also a healthy helping of skill checks in these conversations, and they can alter how you progress a quest in substantial ways. Like my password example earlier some will allow you to bypass entire parts of a mission, and others can boost your end of quest rewards. It’s a fun addition to what was formerly a rather staid experience, and all the named characters I have met thus far have enough personality to make digging into their dialogue worthwhile. None are quite on the level of what you’d expect from a traditional Fallout game, but they come close enough to paper over their deficiencies. 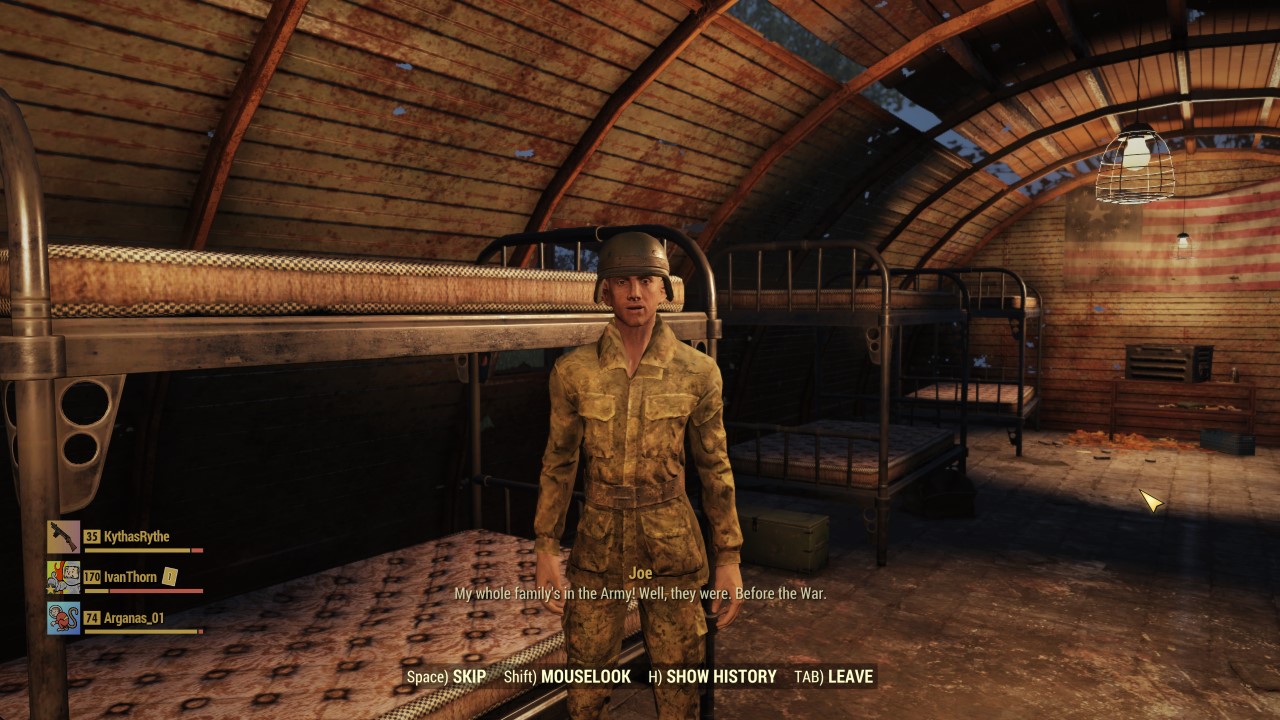 Most of these new named characters are met in sequestered instances where either you or your team leader has control, but the regular world is littered with people now. Touring around country roads and backwoods I discovered most, if not all areas have been updated (some more dramatically than others), and I found more than a few new NPCs sprinkled about that provided more personality and flavor than the robots ever did. Bandits and settlers now roam the land and be happened upon damn near anywhere, and Blood Eagle outposts now populate once vacant corners of the map.

It all adds up to make Fallout 76 feel less lonely and listless, and I still haven’t grown tired of tripping over these little additions. The writing is sharp, the voice-acting excellent, and it all adds up in a way that often makes me think, “hey, it actually feels like I’m playing a Fallout game.” Having living, proper humans around also means there is an abundance of materials and items that were previously harder to find in the early game, such as stimpacks and assault rifles, which has made Fallout 76 feel less like a gruesome slog to survive.

Even some helpful quality-of-life tweaks have gone a long way to make Fallout 76 less of a pain to play and an easier game to enjoy. Loot perks that increased healing item, ammo and other yields automatically trigger and grant the bonus drops now, and quests are infinitely easier to track and parse on the map. In many ways Fallout 76 Wastelanders feels like the first update in which the game has stopped playing like an experiment, and the game feels like it has a focused, clear path forward. That shift in tone, however, makes all the underlying issues all the more obvious. 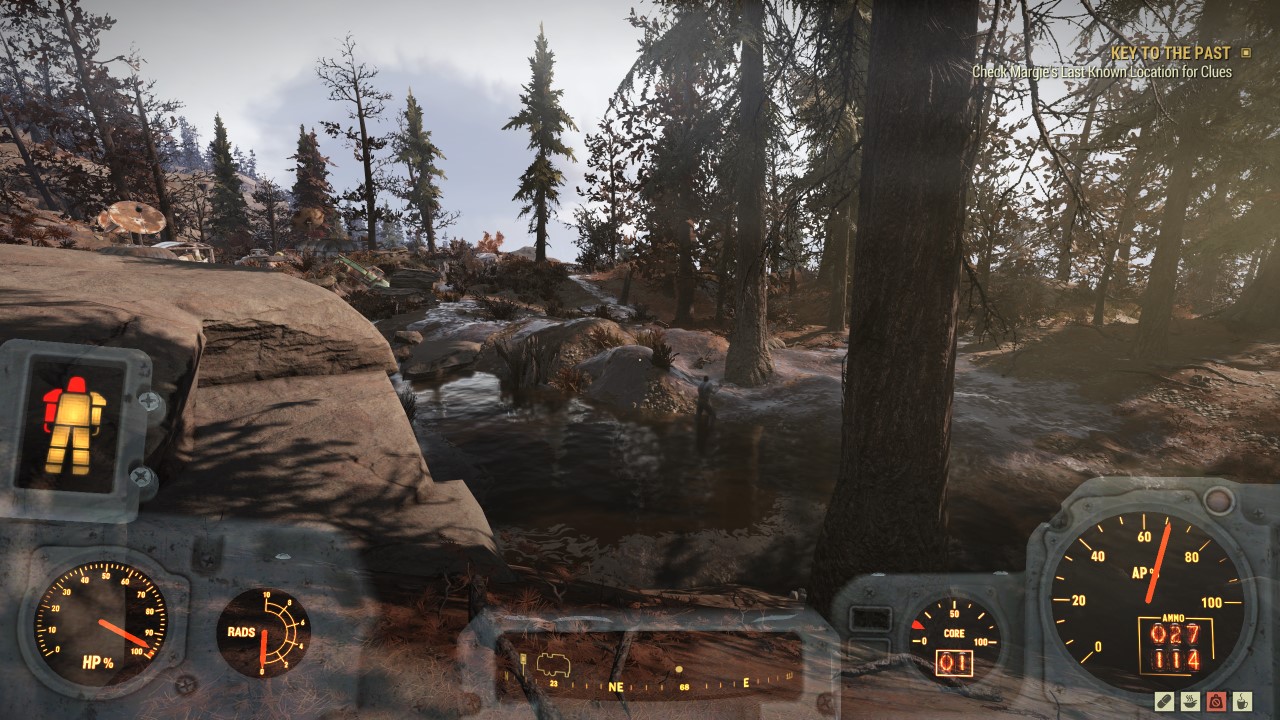 Canonically, the calendar has moved up a full year with Fallout 76 Wastelanders, to include the original vanilla main quest. It’s been spruced up here and there, and there are now humans where there were none, but returning to it after completing the new Wayward intro quest chain highlighted how mundane it still is. Go here and collect a holotape, go there and help Rose find another clue. While the existing NPCs (like Rose) have dialogue options now that provide additional context and world-building, the vanilla quest continues to lack the soul Wastelanders new main quest provides.

The fact that new players are dumped back into this vanilla quest certainly doesn’t help matters, and I worry the fresh coat of paint will quickly peel off before enterprising Vault dwellers get a chance to enjoy the best bits of Wastelanders. Other lingering problems remain as well that highlight just how tumultuous Fallout 76’s existence has been.

Enemy scaling is still determined by the first player to visit an area and spawn the enemies, which means lower level players can often find themselves facing off against monsters and raiders capable of melting them in seconds. Game-breaking bugs are not as common as they once were, but I still crashed a handful of times. While the “improved” lighting does look better there is a strange artifacting effect that can appear around objects and projected shadows when god-rays punch through dense volumetrics. 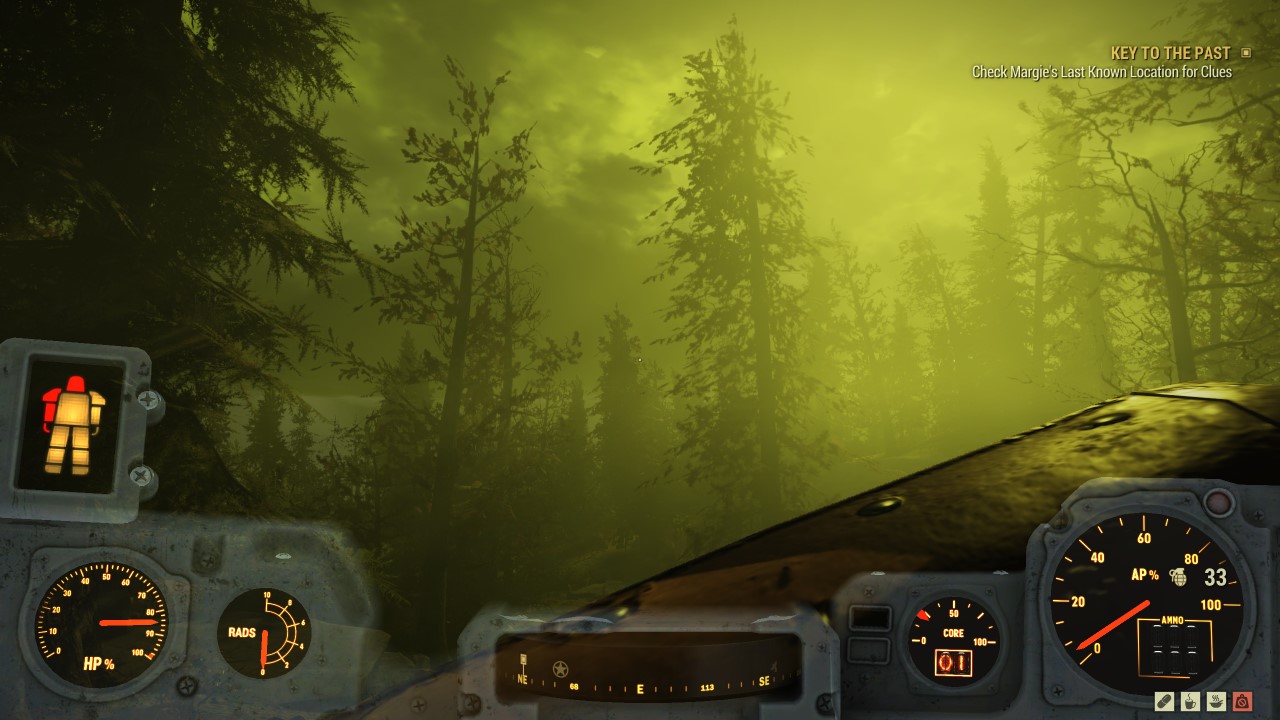 The game does run somewhat smoother, with frame-pacing seemingly improved, but frame-drops and hitching continued to plague me in the strangest locations. Fallout 76 Wastelanders isn’t much different than Fallout 4 graphically, but the two run worlds apart on my computer (GTX 108o Ti for the GPU, 8700k for the CPU, and 16 gigs of RAM).

Then there is the Fallout 1st subscription and other micro-transactions that continue to chafe my ass, but at this point I’m just shaking my fist at the clouds. Fallout 76 Wastelanders isn’t the complete No Man’s Sky revival some may have hoped for, but it does seem to put the game on the path towards one. It’s Bethesda’s most confident update to their beleaguered game yet, and thus far their least broken.

I’m admittedly having – dare I say it? – fun in Fallout 76, where previously I’d barely manage an hour before nodding off from boredom. The game still has a bevy of issues to address (such as balancing and scaling), yet Fallout 76 Wastelanders has made me a smidge more confident Bethesda can correct the ship. I doubt Fallout 76 will ever become an excellent game, but with Wastelanders if feels closer than ever to being a good one. And, you know what, I’m content with that. 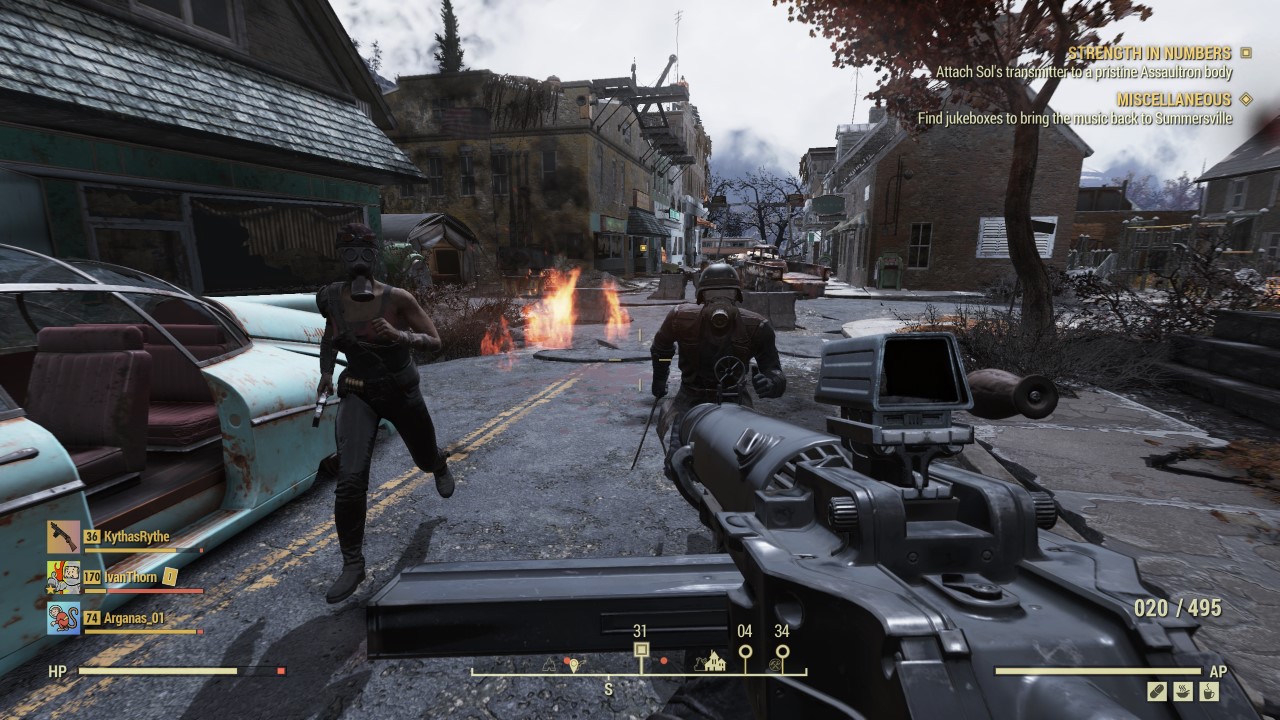 Except for Fallout 1st. Still not pleased with that, but that’s an article for another day. If your a lapsed Fallout 76 player Wastelanders is worth a peak (it is a free update). If you’re an outsider wondering if the game is any better I’d argue the game has become a worthy guilty-pleasure purchase at $20 (which isn’t too hard a discount to find), but if you want a full turn-around then wait on the One Wasteland and other upcoming updates. The new quest chain and human NPCs in Wastelanders elevate Fallout 76 from meme-level dumpster fire to moderately enjoyable title, but there remains work to be done before it can confidently claim to have placed its past behind it.

Welp, after another day of play I can say I’ve stumbled across quite a few additional bugs. Nothing I’d consider disastrous, but enough to remind me Fallout 76 is held together by spit and prayer. Enemies would sometimes regenerate health, my power armor stopped moving within underground instances, and I’d rarely find myself locked to ADS until I reloaded my weapon.

It’s a testament then to how much more enjoyable Wastelanders has made Fallout 76 knowing full well these bugs would have dug deeper under my skin previously. I’ve since deviated from the new quest to see how much was altered in the original main quest after meeting Rose (the answer is “not much”), but the improved economy and drops have made Fallout 76 at its core a less grindy affair.

Enemy scaling still destroys me when I try and play with my substantially higher-leveled friend, but I hope the One Wasteland update in a few months is enough to rectify that problem (and that it somehow launches with fewer issues, but at this point I’ll sooner win the lottery).  I’m still somehow having fun, and even leaning into a proper build now that I’m devoting time to the game. We’ll see where things go from here, and how quickly Bethesda patches the bugs that are here. In the meantime, here is Rose entering the fourth dimension courtesy of Skill Up:

It's good to be home. pic.twitter.com/SIT8Unyfk1