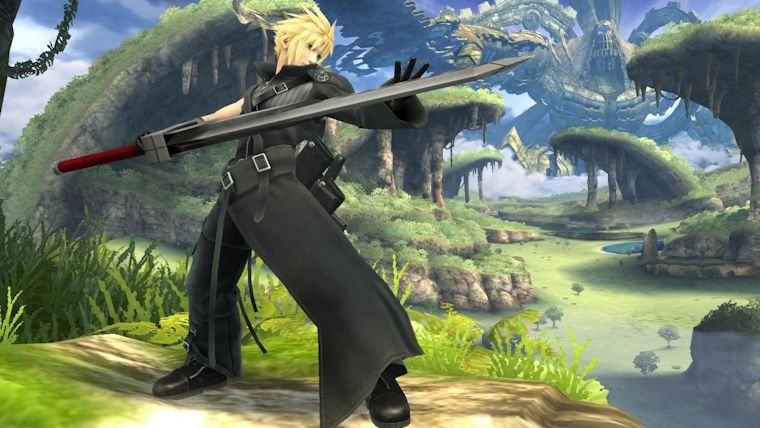 Super Smash Bros. for Wii U and 3DS have both been out over a year now, with the release of four DLC characters since then. Many of the game’s announcement have been through Nintendo Directs or through special Super Smash Bros. presentations, the latter of which we are supposedly getting the last of today.

Back during last month’s Nintendo Direct, the megaton was dropped that Cloud was going to be in the game, with more details to come. This final Super Smash Bros. presentation was also announced, so we thought we’d come up with some predictions, as well as a few dream picks for the presentation.

Getting our first glimpses of Cloud back during last month’s Nintendo Direct, he looked great already in action. There is absolutely no doubt we’ll get more footage of him in action during today’s presentation. However, I would not be at all surprised if this was done as a “available after the presentation” type announcement, like they did with Lucas, Roy, and Ryu being available on the same day. This could give Super Smash Bros. some momentum before Christmas with students on winter break soon, and just makes a lot of sense.

We’ve had a lot of speculation for awhile now that we could see the much awaited return of Wolf to the game after being left out. With each presentation though, he has been left out. With us getting Lucas and Roy last time, it would make sense to announce Wolf, especially with Star Fox Zero coming out in April. The return of Ice Climbers just on Wii U, due to the 3DS’ limitations, or perhaps maybe a solo Ice Climber for both would be great too. These would also be good candidates for being available after the show too.

For years now, fans have been clamoring for the addition of Donkey Kong’s most iconic villain of the Country era in King K. Rool. With a lack of villains and heavy enemies overall, he seems like a perfect character to include that easily could have won the Character Ballot. He’s won many fan polls before on other sites, so we know people want him. The only question is if the fact they added Mii Fighter costumes for King K. Rool might keep him from joining the fight.

This one more so falls under the dream section, though could still be possible, and no I’m not talking about the always joked upon Goku. It will be hard to top Cloud, but Square Enix at least is a third party company that still has dealings with Nintendo on the portable end. The much bigger announcement would be if Banjo-Kazooie was announced as a fighter. This is still my personal favorite that I want to see added, and while it seems impossible, Microsoft has expressed interest in this happening before. Banjo-Kazooie was born on Nintendo platforms and would be a natural fit that would make many people happy.

As a character that would also fall under the previous heading of returning veterans as well as this one would be Snake. Konami is certainly having their issues now and having not had a game on a Nintendo platform in a long time in the Metal Gear Solid series, it would seem his return is pretty unlikely. However, how cool would it be to see him return once again, especially if they got Hayter back to voice him.

On top of the character DLC we’ve gotten in Super Smash Bros., we’ve also gotten a healthy dose of classic stages dating back to the N64 version, as well as a newcomer like Ryu’s stage. We already know we’re getting Midgar with Cloud, but I’m sure any other non-returning veteran fighter would get a new stage as well. The pirate ship would be perfect for a King K. Rool level as an example.

There are so many classic stages they could bring back as well that I know plenty of people would buy. Personally I’d like to see stages like Saffron City (N64), Great Bay (Melee), Fountain of Dreams (Melee), and Poke Floats (Melee). It would also be great to see Corneria from the 3DS version make it’s way to the Wii U, as that is one of the most iconic stages that we need on the Wii U version.

At this stage of the game, I doubt this will happen, but I’d love to see them bring back some of the best mini-games for a price of some sort. This includes Break the Targets and Race to the Finish, which were always a favorite part of the first two games in the series. This is likely too late to add at this point, but there is no doubt a ton of people would purchase this. We can all dream about a story or adventure mode too, but I’d say that is even less likely.

Too Many Mii Fighter Outfits

Based on the past announcements and DLC structure, I’m sure we are about to get another large batch of Mii Fighter costumes with whoever is the next DLC character. It would be neat to get some other Final Fantasy character costumes to go along with Cloud, or maybe even from Chrono Trigger. In fact, Crono would be a fantastic addition to the fighting roster, but with Cloud being added, that seems very unlikely.

This one almost has to be a foregone conclusion, as amiibo have become such a big part of Nintendo over the last year. With the main roster finally complete and Mewtwo already out, the only other officially announced amiibo for Super Smash Bros. is Lucas, who comes out January 22 in the US. I’m predicting we get a release date announcement for at least Ryu and Roy, with perhaps Cloud as well, along with the first official picture of their amiibo.