Hands On With Alien: Isolation Which Is Scary And Difficult 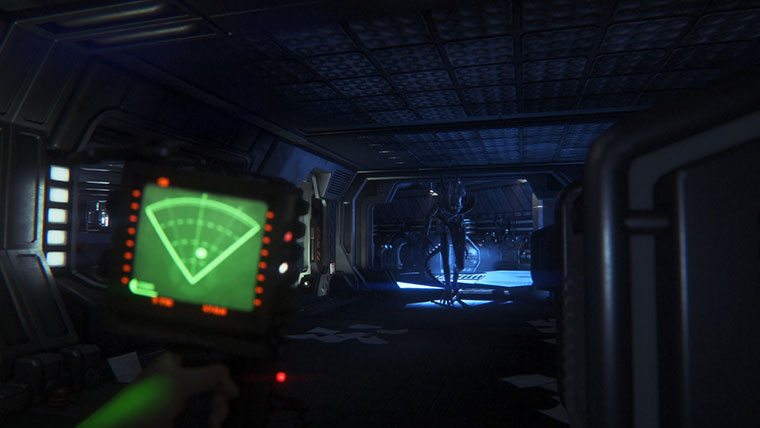 Alien: Isolation looks to capture the eerie atmosphere of the 1979 movie and it appears The Creative Assembly has succeeded in doing just that. It truly is a scary and hard experience you will never forget.

Alien: Isolation was playable recently during the Digital Nationz expo in New Zealand over the weekend. Sega was kind enough to have the game on display for the PS4 and it’s not a game that everyone can play. It’s a type of game that will require you to be smart and have a lot of patience and skill. This is not your usual FPS where you can kill anything in sight. You will die multiple times if you are not careful.

When I picked up Alien: Isolation for the very first time, I was scared (legitimately) because the demo required you to play with headphones on. The headphones added more tension and fear to the game as I could hear the scary Xenomorph lurking in the background all the time. It was not a pretty kind of atmosphere knowing you are about to be killed.

The mini tutorial at the start tells you the controls and advises you not to sprint, or else the Xenomorph would hear your footsteps. I panicked at the start and stupidly sprinted and tried to open up any door I could find. This was a fatal mistake as the Xenomorph came from behind and killed me instantly. I barely lasted a minute and I already died.

A guy next to me was playing the game as well and I saw him fighting off the Xenomorph with a flamethrower. When I restarted my game, I was thinking to myself where did the other guy pick up a flamethrower? Due to me panicking before, the flamethrower was just lying there on the table. I felt embarrassed I didn’t see that the first time around…

When I picked up the flamethrower, I thought I was invincible and could finally fend off the Xenomorph for good. I also made sure I wasn’t sprinting away as this would have given out my position easily.

Even though I tried to be quiet, the Xenomorph still found me. I doused it with the flamethrower, naively thinking I could kill it. It just ran away for a while and I dared not to follow it. I had hoped it was gone for a while.

I was scared again so I just looked around seeing which door I had to open next. The Xenomorph was still around as I could still hear it. I tried to forget about it for the time being and concentrated on escaping.

Unfortunately, the Xenomorph somehow heard me and killed me yet again while I was trying to open the door. I didn’t even have time to get my flamethrower to scare it away again. I felt absolutely hopeless as the Xenomoprh kept killing me. My time was up and I was bummed I was not able to complete the demo.

This actually made me feel satisfied in a weird way as I never had an experience in a video game like this in a long time. Normally in recent FPS games, you have an abundance of ammo and you can just shoot your way to victory. In Alien: Isolation however, you are weak and weapons are not always there for you. I legitimately felt frightened every single time I died. The Xenomorph was both annoying and scary.

With all that being said, Alien: Isolation looks to revive the survival horror genre in the video gaming industry. It was actually a breath of fresh air playing it as I have not experienced a game quite like it before. The game might be hard for some gamers, but this doesn’t mean that’s a bad thing. I admit I was hopeless at the game, but I intend to improve on it if I choose to eventually play the full game when it comes out.

Home / Original Articles / Hands On With Alien: Isolation Which Is Scary And Difficult