Hitman 3 on PC Is to Die For 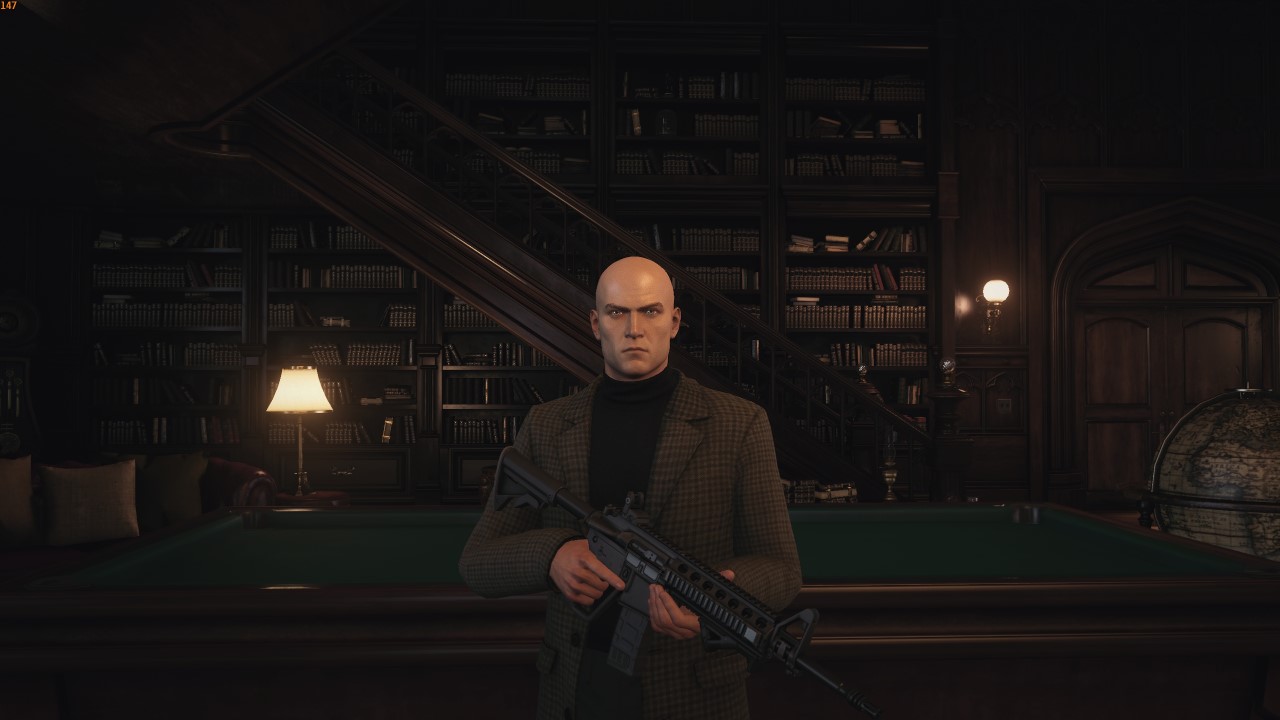 Hitman 3 is the first major release of 2021, and the finale to IOI’s “World of Assassination” trilogy that began in 2016’s Hitman. Our own Diego Perez gave the intricate murder-simulator a perfect 5 out of 5 after reviewing the game on PC, and after reading his high praise for the game I decided to give it a tour of my own to see how well it performed. I’ll skip some of the foreplay: Hitman 3 on PC runs like a dream.

Agent 47’s latest tale of espionage and assignation is no slouch graphically, even if it is using an updated version of the Glacier Engine introduced in Hitman (2016). Despite all the pretty environments, truly massive crowds, and gorgeous lighting, I was able to break well beyond 200 frames-per-second in some scenes at 1440p. Granted, I am running more modern hardware, but even at the lowest of low settings Hitman 3 doesn’t look all that terrible on PC. Certainly not great, but the game’s visuals scale surprisingly well across all settings. I have yet to encounter any real stutters or hiccups, and I’m often sitting comfortably at my monitors max refresh-rate of 165 Hz. They say first impressions are everything, and Hitman 3 is dressed to impress.

From what I’ve been able to see and test, anyone with a PC built in the last six or so years should be able to comfortably run Hitman 3 at 60 or more frames-per-second at High or better settings at 1080p. For a game that looks as sharp as Hitman 3 does that’s pretty damn impressive, though you’ll definitely need a quad-core CPU at a minimum. So, what makes Hitman 3 such a stellar performer? I decided to run Hitman 3 through its paces to see exactly how well the game runs across all the various PC graphics settings IOI has deemed worthy of adjustment. While Hitman 3’s settings are not as granular as say those found in Gears of War 5, it still has a healthy selection of settings for users to tweak. For reference, here are the official system requirements from IOI, and my own system specs used during benchmarking. 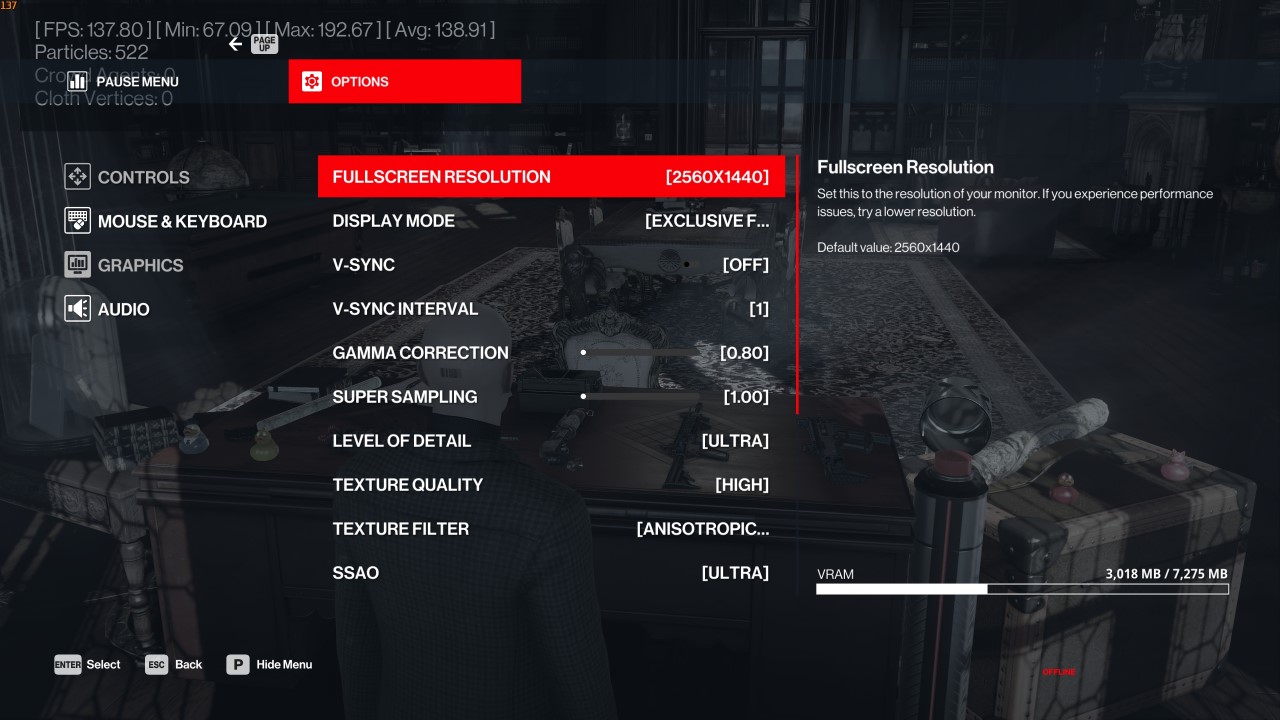 As you can see, Hitman 3 is not all that demanding of a game to run, and if you have aging hardware you should still be able to reach playable framerates with decent visual quality at 1080p. With the the official system requirements and my testbed specs out of the way, lets dig a little deeper into the graphics settings available in Hitman 3 to better understand what we are working with here. Hitman 3 uses the IOI’s Glacier Engine 2, which has been enhanced since we last saw it in Hitman 2 back in 2018. Hitman 3 shares many of the same settings as the last two games in the “World of Assassination” trilogy, but there are some new ones worth discussing here.

The settings available in Hitman 3 on PC are:

That’s not a shabby list all-together, though a few of the more common settings we find in other video games on PC are missing. Most noticeable is anti-aliasing. Despite having the option to adjust anti-aliasing in Hitman (2016), IOI removed it in Hitman 2, and Hitman 3 carries on the tradition. That doesn’t mean Hitman 3 doesn’t feature any anti-aliasing at all: instead, IOI uses a clean temporal anti-aliasing (TAA) technique that keeps the overall image smooth without looking too blurry. Those unhappy with the anti-aliasing in Hitman 3, however, will have to adjust it via some PC file trickery.

As for the usual suspects, Level of Detail, Shadow Quality, SSAO, and Texture Filter have the largest impact on performance, though they’re not as heavy on your hardware as you might think. There’s only a 1 to 2% difference in performance between Ultra and High settings for each (or, in the case of Texture Filtering, 16x and 8x). The visual difference is less pronounced, so those looking to squeeze out a few extra frames can safely drop these in concert with one another to Medium with little impact to visuals for a more noticeable performance uplift. Texture Quality is essentially a non-issue here in Hitman 3 on PC: the game barely broke above 4 GB of used VRAM, so unless you’re rocking a GTX 970 or older GPU you can safely keep this setting on High.

New to the list are Screen Space Reflection Quality (SSR), Variable Rate Shading (VRS), and Simulation Quality – Graphics. If you’ve watched any of the recent trailers for Hitman 3 and ogled at the lovely reflections you can thank SSR for that. It allows materials and surfaces in Hitman 3 to more dynamically and realistically reflect light, but it comes at a decent cost to performance. Turning it off entirely leaves the overall image looking dull and flat though, so it’s not something you want to disable outright without adjusting the other settings first.

Variable Rate Shading allows the GPU to better prioritize its power, focusing on more intense portions of a scene at the expense of less intense segments. It has slight to moderate impact on the overall visual quality in Hitman 3, but PC players just shy of their target frame-rates will find it’s a useful tool for increasing performance without having to sacrifice some of the other more noticeable graphics settings.

Simulation Quality – Graphics can be an absolute performance hog if you set it to Best, but it’s also very situational. Simulation Quality – Graphics enables dynamic environmental destruction, larger crowds, and improved AI. Thing is, unless you play Hitman 3 with guns blazing, you’ll rarely push the setting into CPU crushing territory. That said, it’s still recommended for CPUs with four or fewer cores to keep this setting locked to Base. Eight-core CPUs can safely set this to Best, but if you’ll want to play around with the benchmark a bit if you’re rocking a six-core CPU like myself, for reasons I’ll get into further down below.

Even with these new settings disabled, Hitman 3 still looks and runs quite well on PC, despite the flatter presentation from the lack of SSR. In all honesty, Hitman 3 looks nearly indistinguishable from Hitman (2016) while in motion without these three settings enabled, which is good news for performance: you can largely mimic your settings from the first game and net similar results. 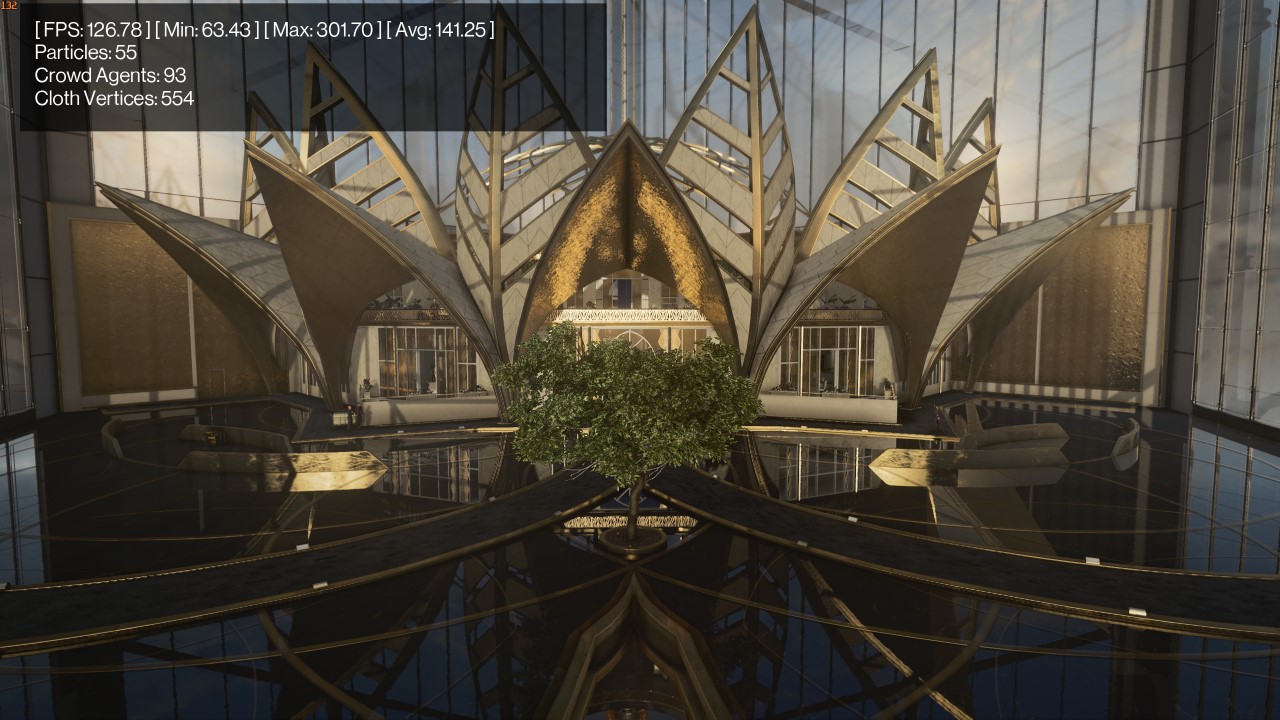 What about the numbers? Well, let’s start with some benchmarks. Hitman 3 on PC opens with a launcher that has all of the game’s graphical options available for tweaking with three benchmarks on offer. The Dubai benchmark is pretty traditional, with an emphasis on crowds and reflections – to better stress the SSR settings and your CPU’s ability to render more characters. Second is the Dartmoor benchmark, which is pretty much tailored to pushing your CPU as hard as it can go if you really want to know if it can handle the Best option for Sim Quality. The last benchmark is also set in Dartmoor, yet interactive.

Running Dubai at max settings at 1440p (with VRS off and Sim Quality set to Best) I averaged 145.99 FPS. Enabling VRS – Quality raised that average to 148.47 FPS, while Performance boosted my average to 151.68 FPS. The hit to visual fidelity was nearly imperceptible with the Quality setting, though reflections had some obvious artifacts around the edges when using the Performance preset. Disabling SSR (with VRS off and Sim Quality still at Best) put my average framerate around 153.76, which was a 5.3% improvement in performance. Enabling VRS did provide a noticeable performance increase, albeit not a giant one. It was enough to nearly counter the performance cost of SSR at High, so anyone rocking an older rig can use VRS to claw back some of their performance if they prefer to strike a delicate balance between framerate and visual fidelity.

Interestingly enough, Simulation Quality – Graphics didn’t affect my overall performance at all in Dubai: there were larger crowds and more people milling about, but my average frame-rate didn’t budge much between Base and Best. The story changed once I jumped into the Dartmoor benchmark. At the Base setting glass shatteres and bullet impacts are rendered, but that’s really about it. At Best, however, full environmental destruction is enabled. Books fly off the manor’s library shelves as torn pages fill the air like snow, pillars crumble into stone and dust, and wooden furniture is shredded into splinters. It’s a lot for a CPU to take in, and the eight-core recommendation for the Best setting makes sense after running the benchmark a few times.

Oddly enough, my six-core i7 8700K handled the destruction with little issue, with one major exception. The benchmark stalled and froze briefly at the beginning as the first bookshelf was demolished in a hail of gunfire, as all the cores and threads in my CPU appeared to “wake up”. Once all the cores were spun-up and in-sync, my CPU handled the rest of the benchmark without issue, despite there being more devastation and particles to render. That said, the delta between running the benchmark with Sim Quality set to Best and running it at Base is stark: I averaged 98.01 FPS with the Sim Quality Best setting enabled, and 139.19 FPS with it set to Base.

That’s a nearly 30% hit to performance! Personally, the quick hitch and freeze at the start aside, the performance with Best enabled didn’t bother me. Gunfights on the scale of Dartmoor’s benchmark are not exactly common in Hitman 3, even if you go out of your way to piss everyone off. The interactive Dartmoor benchmark alone highlights how difficult it is to push Sim Quality to a similar breaking point – even when under fire from a full assault of guards in the library I rarely dropped below 110 FPS, and I was chucking explosive rubber ducks with abandon. I would suffer a brief hitch whenever the first bookshelf exploded (no other objects had this effect on my performance), yet it never reappeared until I manually reloaded the benchmark. To put it simply: the impact to performance was too rare to bother me. 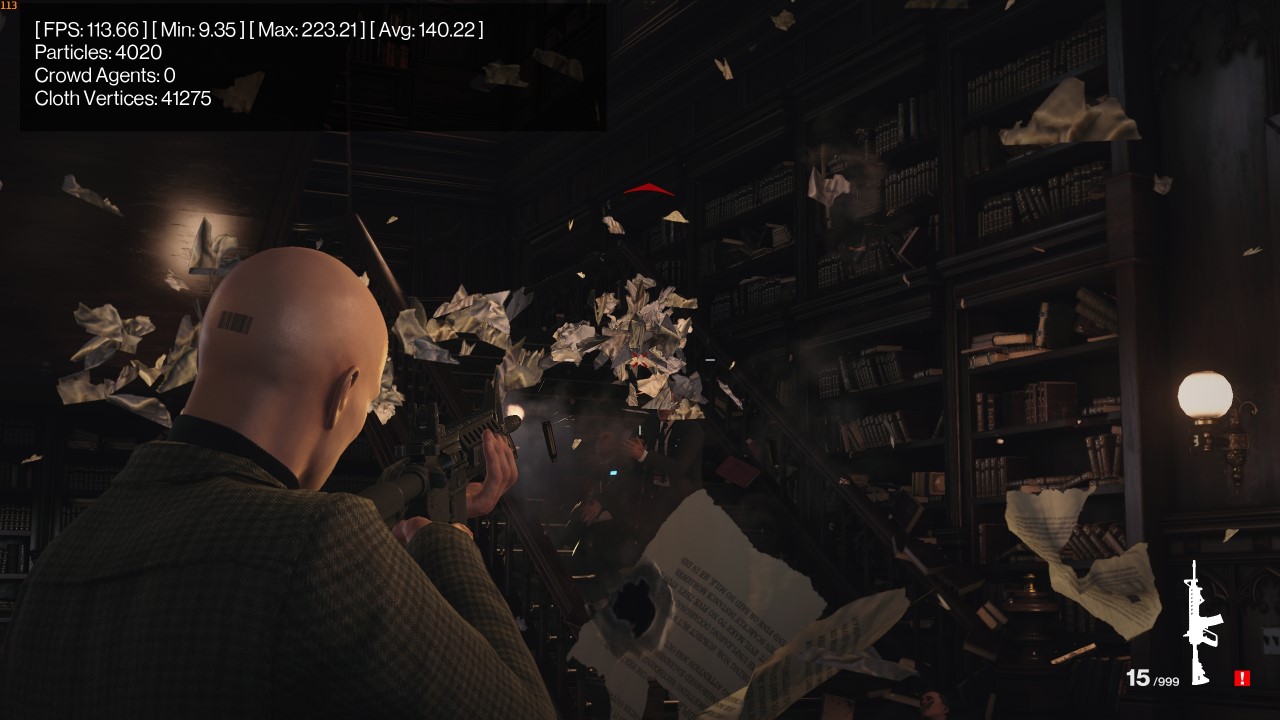 As a final quality test I ran Dubai once more, but at the lowest possible settings. Whatever could be turned off was, and I set Sim Quality to Base. I averaged 198.42 FPS after multiple passes, though my frame-rate was often well above 210 FPS. That’s a 36% increase in performance over max settings (without VRS enabled), meaning PC fans have a healthy amount of headroom to play around with when it comes to dialing in their settings to reach the performance they desire.

The long and short of all that above: Hitman 3 will run without issue on a wide range of PCs, and owners of high-end systems are in for a treat. The Sim Quality Best setting may be best reserved for those with CPUs packing more than six cores, but every other setting appears finely tuned. The differences in image quality between many of the Medium and High settings are barely perceptible, and even the lowest of low settings is serviceable (if you don’t mind everything looking a little unmoored from reality). Like a master assassin, IOI hit their target with absolute precision. Hitman 3 on PC is perhaps the best way to play their masterpiece, and it’s only going to look better when ray tracing and DLSS are introduced later this year.