Hyper Scape is a Fresh Take on Battle Royale

Ubisoft's latest is more interested in shaking things up than copying what came before. 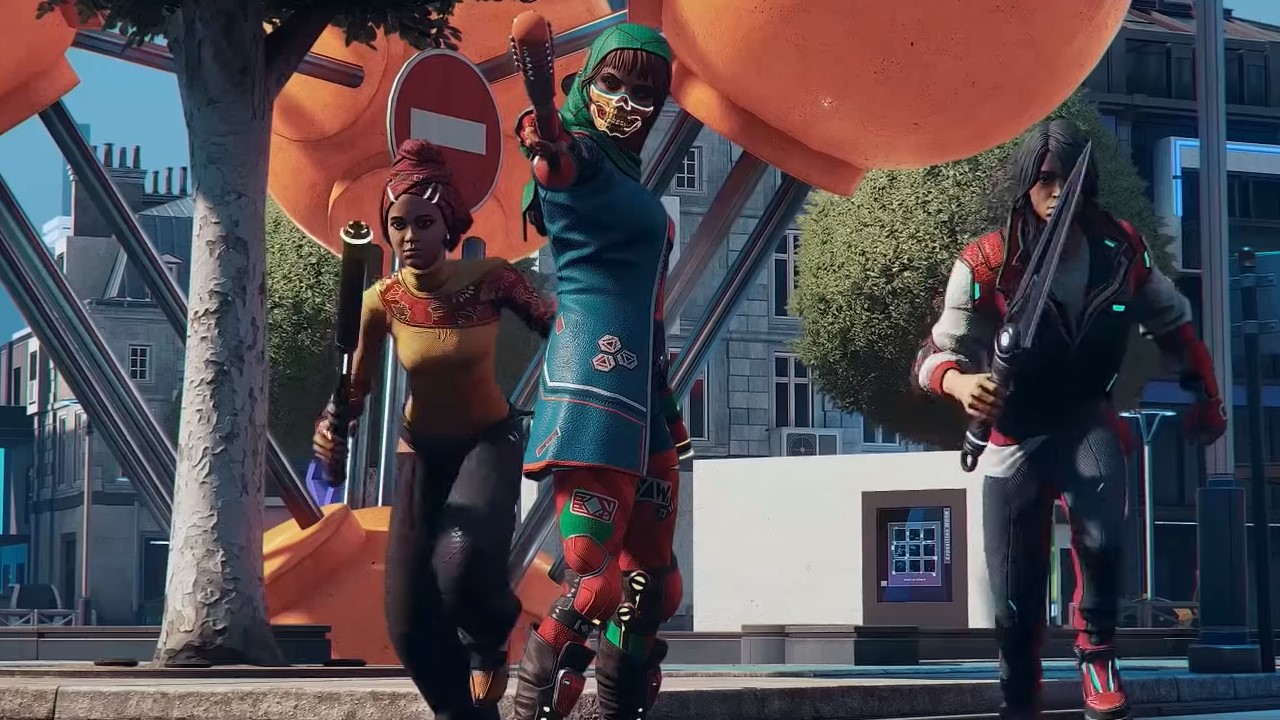 Throw a stone in today’s gaming market and you’ll likely hit a Battle Royale of sorts. The genre exploded onto the scene with PlayerUnknown’s Battlegrounds, then hit critical mass when Fortnite pivoted from their Save the World PvE mode towards Battle Royale. Since then it feels like every publisher has taken a crack at crafting their own “winner, winner; chicken dinner” to varying success. For every Apex Legends and Call of Duty: Warzone there’s a half-dozen struggling or failed battle royales, so when Ubisoft’s Hyper Scape leaked earlier last week I couldn’t help but roll my eyes. ‘Great,’ I thought, ‘let’s add another one on to the pile.’

Turns out Ubisoft wasn’t interested in copying their competitors verbatim. While the foundations are familiar Hyper Scape makes smart adjustments to the formula, and despite the game candidly being a work-in-progress it has the potential to stake a real claim within the crowded battle royale market. It may not take the crown, but it can be a real contender when it’s completed.

The basic concept hasn’t changed in Hyper Scape: drop into a massive map among an army of competing psychopaths, loot equipment from the field, and work with your team to be the last maniacs standing. It’s how Ubisoft has approached and altered this formula that makes Hyper Scape stand out. Naturally, the first difference players will notice is the map.

Hyper Scape is an urban affair. There are no hazardous field to cross under the watchful eyes of enemy snipers, perilous mountains to scale, or brushes to stake a campsite within. Instead players drop into a modern city filled with narrow alleyways and dense clusters of buildings, where verticality reigns supreme. Movement is closer to Apex Legends than it is Fortnite, and players are able to double-jump and maneuver in the air with pin-point precision (that, and the slide is perhaps the fastest in the genre). At times the mobility in Hyper Scape feels better than the movement in Apex Legends, and that game is essentially Titanfall 2 minus the wall-running. 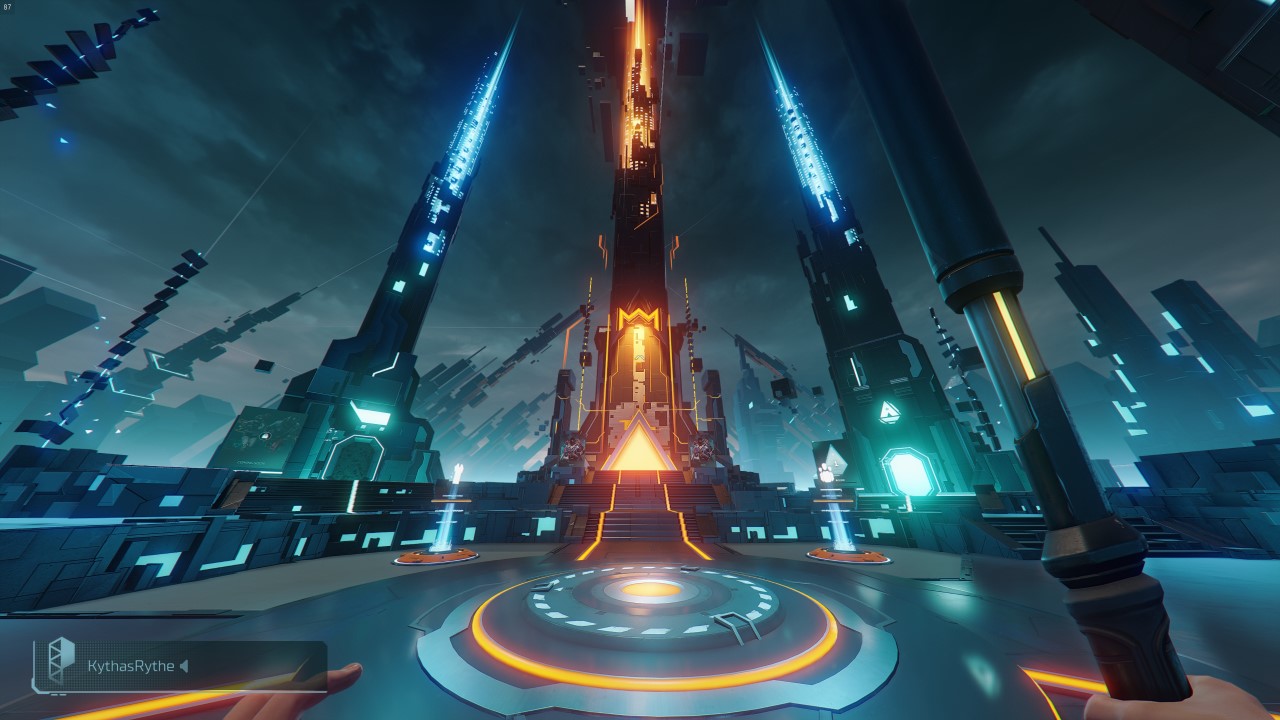 The snappy movement and more claustrophobic map lends Hyper Scape a more arena-shooter vibe as players jump and dive in an attempt to out-maneuver each other. There are even jump-pads scattered about with near abandon, encouraging players to take to the rooftops as they bounce and weave between cover. Additionally, armor and health packs do not exist in Hyper Scape because health eventually recovers over time, so players are encouraged to hunt each other down in fast, brutal firefights.

The stable of weapons available would feel right at home in an arena-shooter, from the standard assault rifle and shotgun, to the auto-lock pistol, and splash damage grenade launcher and plasma rifle. There is a sniper rifle, but most of the arsenal is tailored around players pushing close-range encounters, which dramatically alters how players engage opposing teams when paired with the dense urban map.

To further push aggression resurrection requires wholesale murder. Want to bring the dead back? Then you need to kill another player, who will drop a Restore Point along with their loot. Dead players linger around as Echoes that can scout and ping the map unseen, and when they step into one of these Restore Points a living ally can return them after a short cast time. The resurrected will return without their weapons or abilities, but they’ll have all their ammo, meaning they can grab whatever was dropped by the foe slain to create the Restore Point and jump back into the fray. From what I’ve seen there isn’t a limit to how many times you can return from death, so it behooves teams to push the fight and wipe out an entire squad.

Even the “ring” functions differently in Hyper Scape than it does in any of the other popular battle royales. Instead of a literal ring slowly reducing the available play-space the map in Hyper Scape “decays” rapidly, district by district. It’s closer to what Radical Heights attempted, though Hyper Scape doesn’t use perfectly square grids. Entire segments of the city fade away (because we’re “technically” playing within virtual reality), and as the collapse timer runs down the entire environment slowly disappears until nothing is left but empty space. 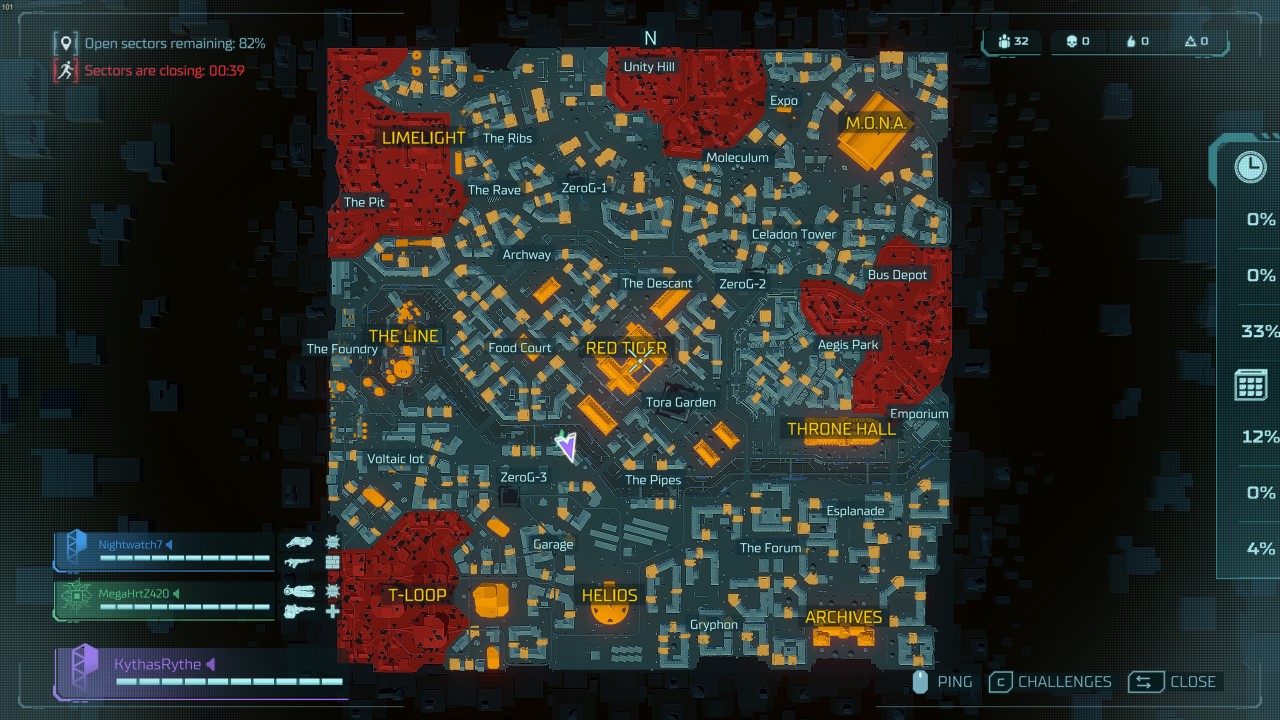 Once a grid has decayed players will make the usual mad dash towards safety, but because the district no longer has anything in it – no loot to pilfer as you extract, or buildings to block line-of-sight – there is zero incentive to stay behind. This tweak means “playing the circle” isn’t the brightest idea, forcing teams to constantly change position. Such a mad-dash concept would make looting a nightmare in any other battle royale, but Hyper Scape has made some smart changes to the concept that further bolsters its more arena-shooter approach to combat.

As I mentioned earlier there aren’t any health packs or armor to worry about in Hyper Scape. There are only weapons, ammo, and abilities. Weapons are upgraded by collecting a duplicate and “fusing” them together – there are absolutely no weapons mods to speak of, and there is only one ammo type. Weapon upgrades are equally simple: with only a handful of exceptions most weapon upgrades are magazine boosts, with a proper damage upgrade coming only once players have reached the tier 5 cap. That means the majority of fire-fights come down actual skill versus luck, though running into a team loaded with a fully upgraded arsenal early in the game isn’t impossible (there are areas with max-level loot, but they’re also the spiciest spots to land).

Abilities work exactly as you’d expect, though unlike Apex Legends where each character comes with a tailor-built kit each player in Hyper Scape must loot the two they prefer from the field. Like weapons these are upgraded by grabbing duplicates (which all largely reduce the cooldown), and a well coordinated team will communicate who is using what to maximize their performance. There are healing auras, temporary damage shields, ground-slams, and more, all capable of shifting momentum in either your’s or an opponent’s favor.

The UI and ping system make it easy for even silent teams to coordinate. While the ping system may not be as robust as Apex Legends (you won’t be calling out the explicit name of a weapon in Hyper Scape, for example), it works well enough and players can even ping multiple items without overwriting previous callouts. The team UI not only indicates how much health everyone has, but what weapons and abilities they are carrying, which makes it all the simpler to identify who is looking for what. 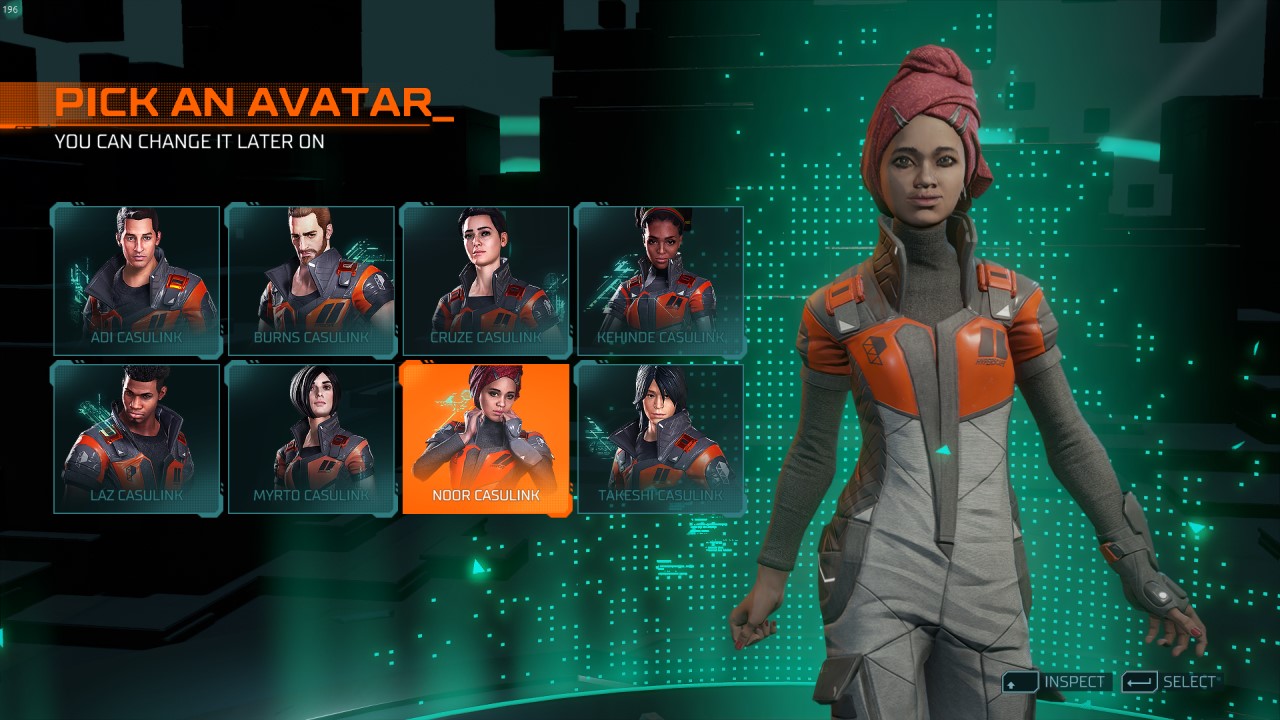 To make things even more interesting there’s a secondary way to win a round in Hyper Scape outside killing everyone else. When only one district is left a crown will spawn, and if a player can hold on to it for 45 seconds without dying their team will win the match. That player will be clearly marked for all to see, so it isn’t as rudimentary as grabbing the crown and buckling down in some hidden corner of the map: again, the arena-shooter inspiration comes into full play here, as the player and their team leap and bound in a desperate attempt to survive. A match is still won if the other teams are knocked out, but the addition of the crown dramatically shifts how players confront the final “circle”.

From what I could see, there appears to be at least two other modes in development for the final release, but the current Crown Rush is already rather robust. It’s also evident Solos and perhaps Duos will be added to the game, so players won’t be locked to squads-only come release. There’s already a decent training range available to sample every weapon and ability, a free battle pass with ten tiers of goodies available only during the Technical Test that will carry over to the full game, and a decently sized lobby with portals to everything (including three empty ones near the training portal, making we wonder what else Ubisoft plans to add).

Of course, every battle royale wants to be a Twitch darling, and Ubisoft has crafted a rather fun system to make streaming to the platform more appealing. Viewers can vote and select different modifiers that affect the entire map and everyone therein, from low-gravity to reduced ability cooldowns. This Twitch integration has led to some killer clutch players, and introduces the right amount of chaos to keep everyone on their toes. Naturally, if Hyper Scape fails to find a Twitch audience after launch this feature will be seldom seen, but I appreciate it nonetheless.

Hyper Scape is clearly not some half-baked attempt to cash-in on the battle royale genre, and while a Technical Test may not be as bold a debut as Apex Legends surprise release, it’s at least demonstrated Ubisoft is on the right track. I’d rather take a limited trial than a slapdash “full release” any day, so while some of the hype will wear off by the time Hyper Scape is ready to come out of the oven it’ll be a better game for it. At 10GB it won’t consume your hard-drive with the same disregard as the competition either, and I expect the full package to remain much smaller than any other AAA battle royale currently available. As a bonus, the game looks and runs exceptionally well: it may not be pushing any limits, but the graphics are sharp, the overall design eye-catching, and performance stellar. 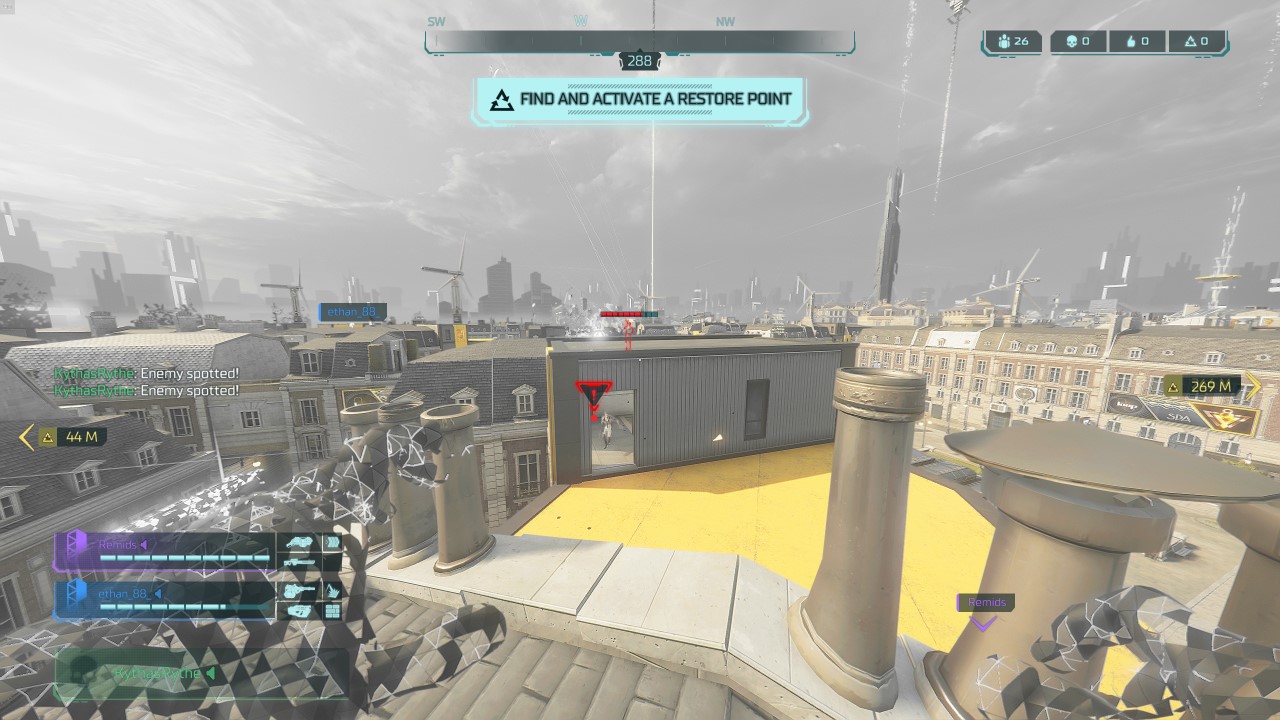 I do have some early complaints: audio is a mixed bag as some of the weapons lack the requisite punch, directional audio within buildings is “meh” at best, and headshots sound laughably flaccid, but overall I feel Hyper Scape is does enough differently to merit its existence among the titan’s of the battle royale genre. I enjoy the more streamlined approach to loot, even if I can see some veterans of the genre growing bored of it over time, and I greatly appreciate the more arena-shooter feel of the game. We’ll have to wait and see what else Ubisoft has up their sleeves, but so far Hyper Scape has the potential to go the distance. Who knows, maybe it will win itself that chicken dinner after all.