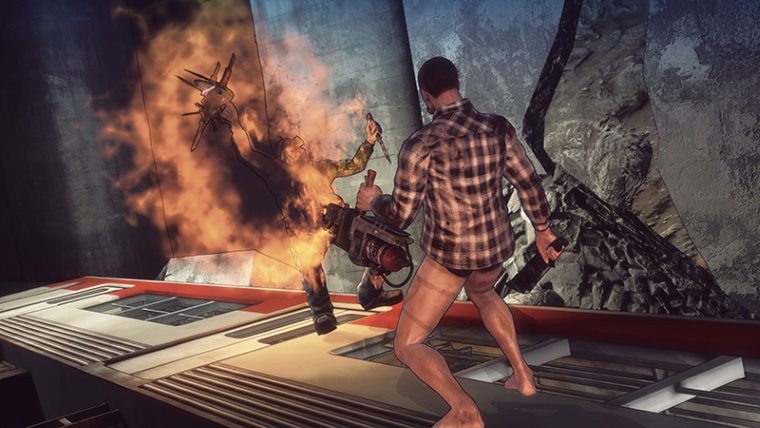 I’ve played a lot of video game demos before. Sometimes the game’s creator is there, and sometimes they aren’t. Usually it doesn’t matter all that much, though having them there can be nice since you can ask them a bunch of questions about the game, and their thought process in developing it. Let it Die was not like any game demo I’d ever played though, because that game designer was the venerable Goichi Suda, otherwise known as Suda51.

Suda51, in case you aren’t aware, is a bit of an auteur game developer, producing some of the best games of the last few decades. Those games though are often underappreciated, and create a love/hate relationship in almost anyone who plays them. They are also, almost universally, brutal and bloody affairs.

This is all true of Let it Die as well, though with the game not available we can’t say yet if it will be underappreciated. It is certainly brutal and bloody though, and while it isn’t colossally difficult, it has a very definite level of challenge that modern games have moved away from as of late. So, the deck was stacked against me before I even pressed Start. 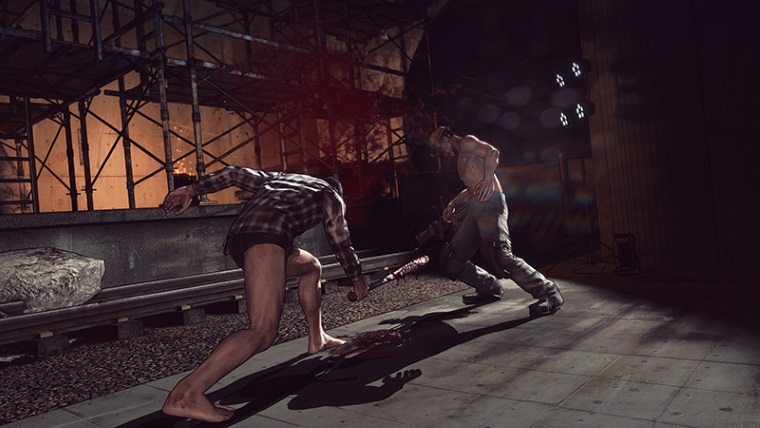 Adding to the challenge was the setting for this demo. While attending E3 2016 I left the LA Convention Center and headed to a nearby apartment building. There I met with Suda51 himself, who shepherded me through the game, along with another member of Grasshopper, and Kazuki Morishita CEO of GungHo,  Let it Die’s publisher.

Pressing in on the left side lets you throw it. Pressing on the right will make you eat it. Guess which side I pressed?

My game began as all games of Let it Die do, with my character in his underwear. I had no weapons or other items, and was simply set out into the world to figure things out on my own. In this world, I learned later on, a giant tower has appeared and now player characters charge at it in an attempt to reach the top.

To do so they must engage in combat, defeating monsters, as well as other player characters, who are being controlled by the game’s AI, rather than actual PvP combat. On their way to the top they will collect new weapons, armor, and other gear. Upon death they will have limited continues (the game is free-to-play), and if they are out, all of the items they had on them are gone forever. Alternatively, they can take things back to their base for safe keeping.

Back to my demo though, and my ultimate embarrassment. You see, Let it Die uses mushrooms as a sort of catchall item. When mushrooms spawn in the world, either randomly or due to an enemy death, the type of mushroom is a bit random. In this demo I had a couple of different mushrooms, but the key one was the exploding mushrooms.

These are sort of Let it Die’s grenade weapon, with players able to toss them at enemies. However, Let it Die doesn’t really care if you mess up, as so many Suda51 games are known for. This mushroom is right there in your inventory next to the frogs that you eat to gain health, perhaps you are already seeing where this is going. The way you use them is by swiping on the PS4 controller’s touchpad to pull it up, then pressing in on the left side to throw it. Pressing on the right will make you eat it. Guess which side I pressed? 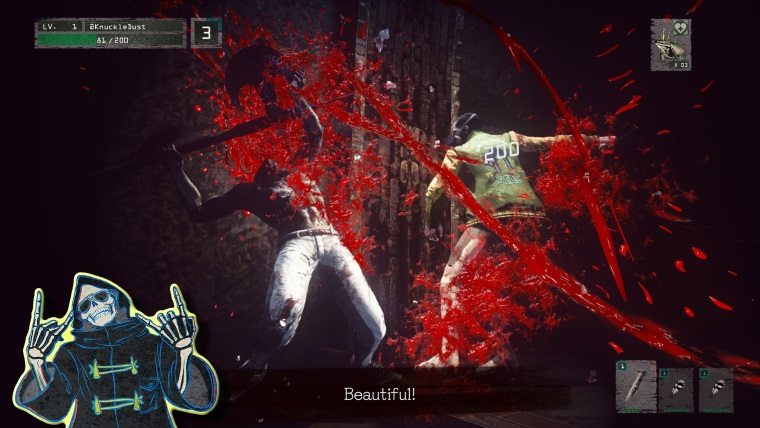 Yeah, so I ate an exploding mushroom. It blew up, and I almost died. At first I had no idea what had happened. I hadn’t been told which side to press, simply to press the touchpad. The room filled with laughter as my character stumbled about, and I looked, wide-eyed at Suda-san, and the others in the room, wondering what happened.

They explained, and I promised to not do it again. “I just write about games, I’m not actually good at them” I said, trying to play it off. Of course, there was no excuse when I ate another one just a little while later. This time the laughter was deafening, and I certainly joined in. “I thought I had selected the frog!” I proclaimed, and since this meant I was low on health, this second explosive meal led to my death.

The room had let out a sound that was one part impressed, the other part total surprise

Luckily I had a continue still, so I used it and trudged forward, determined to stop embarrassing myself in front of one of gaming’s best designers. Thankfully I succeeded, in fact I began to really get the hang of Let it Die. Around a corner was a player character, the ones that are based on other players, but aren’t actually controlled by them. “Don’t open the gate” they told me, simply saying that I should look, but not touch, as he would kill me very easily.

Of course, I had a gun with me by this point, and there was plenty of space between the bars of the gate. “Can I shoot him through here?” I asked, to which they said “of course.” Three headshots later and I was well on my way to redemption, the enemy bleeding profusely on the floor of the dungeon. The room had let out a sound that was one part impressed, the other part total surprise. I chose to ignore that second part.

Now that it was safe I opened the gate and plundered the body and nearby chest for riches. “You just found a samurai sword. That is one of the stronger weapons in the game,” they told me. Things were definitely looking up. The rest of the demo was largely uneventful, though now that I’d figured out how Let it Die worked, I was having a whole lot of fun. Enemies appeared before me, and I cut them down, either with my fancy new weapon, or with my many others, including a buzzsaw/nail gun combo that I’d grown rather fond of.

You see, weapons in Let it Die can be assigned to either hand. So, if it is a one-handed weapon, you can dual wield it with any other one-handed weapon, then use either trigger to attack with the desired hand. The samurai sword was a two-handed weapon though, so no nail gun action with it.

Finally I came upon the boss, or mini-boss as they called him. This bloody, bulbous monstrosity was covered in dead bodies, which he wielded like a weapon against me. He would charge at me, or toss bodies if I was too far. He was also blind, which meant if I stood still and made no noise he didn’t know where I was. Of course, I did nothing of the sort, charging him with my samurai sword and slashing away.

Using all the skills I’d learned so far, I was able to take him out fast enough that Suda51 and the others in the room applauded, saying “that was fast” as he fell to the floor. I may not have fully redeemed myself from my self-induced explosions, but it was enough that I could leave the room with my head held high.

Let it Die is a free-to-play action-brawler that will arrive on PS4 later this year.