Madden 21 – The Yard: Everything We Learned From our Hands-on

Answers to your questions about Madden NFL 21's newest mode. 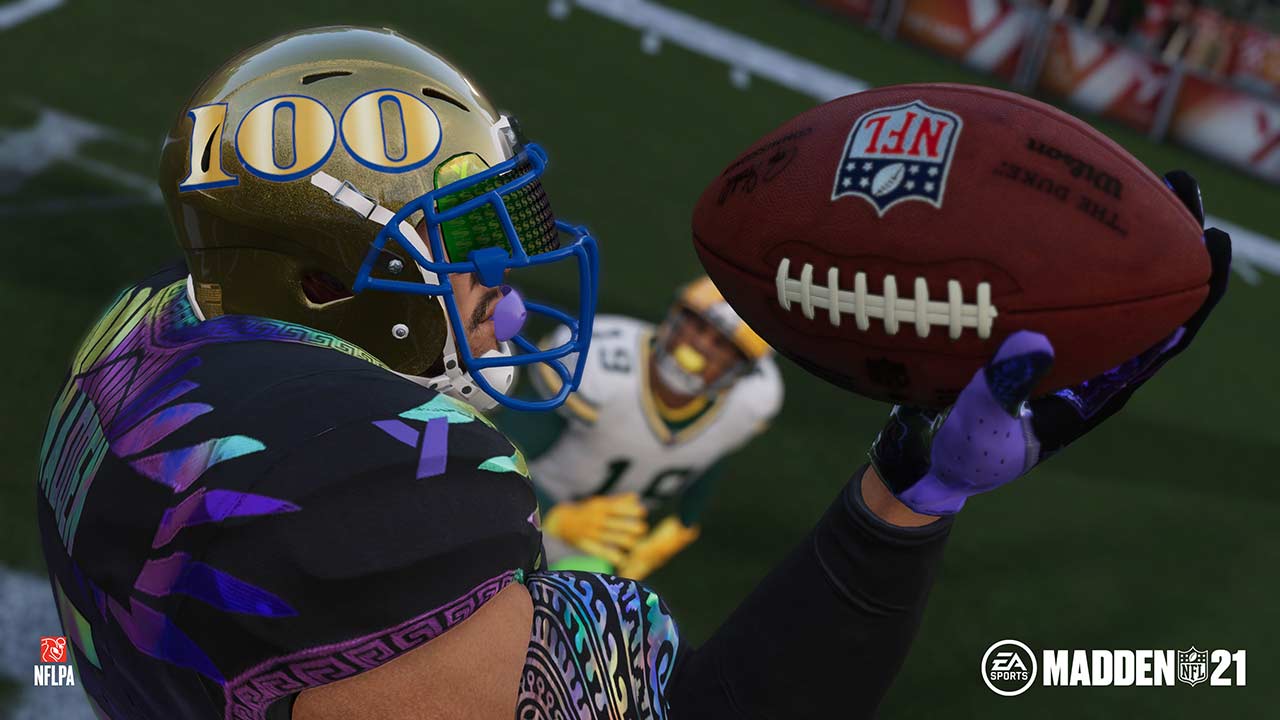 Madden 21 is going to feature a new mode this year with the introduction of The Yard.  Though the game mode was introduced recently in the Madden Mobile and that’s very much a good representation of what to expect when you fire up The Yard on consoles.  It’s an arcade brand of football, that EA likens to backyard football.  That means trick plays, pitches, laterals and all sorts of different plays that are only limited by your creativity.

The Madden series definitely isn’t known for being a risk taker from year to year, with the annual releases feeling more like an iteration than a innovation.  With that said, The Yard isn’t a mind blowing revelation.  In fact, it feels more like a Madden modifier, whose purpose is to cast a wider net, making Madden appeal to more players.  Where Madden has long gotten into the territory of being too complicated for newcomers to pick up and play, The Yard could be the answer to this problem.  It’s online multiplayer football (or vs. the CPU) that keeps players involved and engaged with each play.

What is the Yard in Madden 21

The Yard is six versus six “Ironman” football.  This means that players play both ways on offense and defense.  The game is played on a smaller field and the pace of play is faster where games can take as little as five to ten minutes.

While these matches are football at the core, they might not be the type of football you are used to from Madden games.  For starters the ball can be hiked to any player on the field, and any of those players can make forward passes when behind the line of scrimmage.  There’s plenty of double passing, multi-snaps, laterals, pitches, and trickery.  On top of that, the game rewards you for using these systems with a Bonus Point Scoring System.  This means that you get more points for things like Double Passes, Long Touchdowns, and Interceptions. 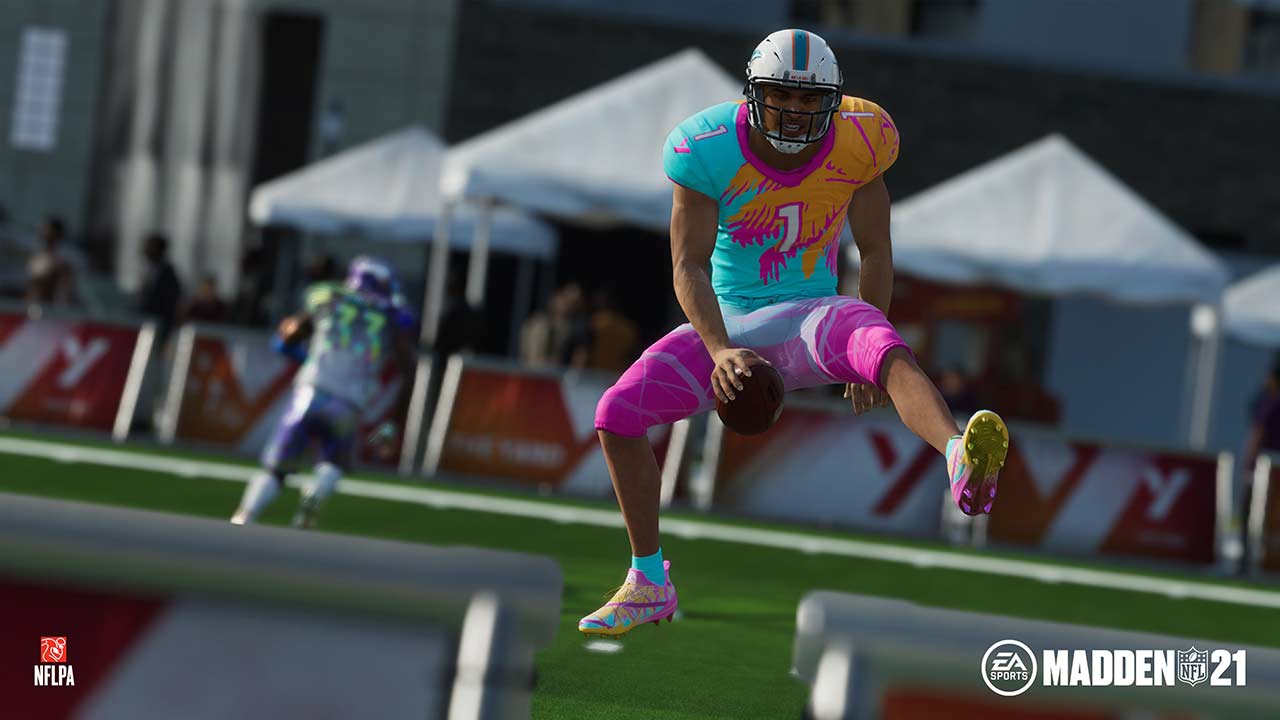 Upon scoring a touchdown you can also choose to go for a 1, 2, or 3 point conversion.  Each one starts you further and further away from the goal line to start the extra point(s).   The gameplay hook for The Yard is definitely coming from a more arcade-like experience where you’re free to experiment with different types of plays.  It’s also a mode where you’re able to create a character and customize them with different cosmetic items to make them stand out.

The cosmetics in Madden’s The Yard mode aren’t the star of the show here.  It’s unlikely that many Madden players have been clamoring to play dress-up with their favorite NFL stars.  Or maybe it’s just me that thinks it’s weird.  Plus you run into the problem that non-licensed football game have had.  The players just aren’t as recognizable when they’re wearing random gear than they are when wearing their official jerseys, numbers, etc.

While the mode certainly skews towards the arcade side of the fence, there’s plenty of strategy in it as well . This really comes down to a couple of different areas where the player has agency.  The first is in picking your player’s position on the field.  This dictates where you’ll line-up pre-snap.  Then you pick a prototype.  These were basically described to us as “suits of armor” that you place on your created avatar that bestows the real life NFL player’s skill set upon you.  Whether that’s a mobile QB or a possession WR and all the positions in-between.  Then things can get really interesting depending on which mode you’re playing in.  If you’re playing against the computer, you’ll have a team of NFL players made for you.  If you’re playing against other human players you’ll draft your team.  Here is where we found The Yard to be quite compelling as on the field, this is very much a game about match-ups.  A bad match-up can really put you at a disadvantage considering the wide range of players both offense and defense that have to play both sides of the ball.  We had multiple games where wide receivers like Adam Thielen and D.J. Chark had shorter offensive players trying to guard them on fly routes and it just wasn’t happening.  On the flip side, we saw tall and fast offensive players casting large shadows as DBs on opposing players in bad match-ups, making for easy interceptions. As mentioned, the Yard is both multiplayer and can be played against the CPU.  The way that it is set-up the game will always have CPU-controlled players in it.  The games are always 6v6, but there will only ever be 3 human players on one team.  Matchmaking is also set-up so that you aren’t playing in a 1 human versus 3 human situation.  As you might expect, the human versus human games have the most variance and it’s where we saw the most creative plays.  It can be pretty hard to guard a human player with control of a receiver.  The on-the-field action is fast paced and fun.  There’s a wide range of plays to call on both offense and defense, as well as many of the pre-snap changes that you can make in the normal modes.

Progression in The Yard is going to have a few dangling carrots for you to grind towards.  There’s the aforementioned loot that can be outfitted on your avatar and that looks to be one of the big things EA is focused on here.  There’s also the progression of your prototypes as well.  It’s a straight forward system here.  Play The Yard and you’ll earn prototype progression points, win or lose.  These can increase your proficiency with the different prototypes you can select at the start of a match that are used by your created character.  The more you play the mode, the more access you’ll have to better prototypes or better versions of the prototypes available.  From what we saw there was going to be plenty of room to add new prototypes to the mix.  Alongside this progression you’re also earning Madden Rep and Cred, this goes to unlocking different rewards and gear for your avatar.  Alongside the mobile counterpart, The Yard allows you to share this Rep, Madden Rank, and Cred Currency between the mobile game and console/pc game.  Just about everything is shared between platforms, except for the Madden Cash and Points that are exclusive to their platforms as well as your gear loadouts.  Not to mention, the mobile game is slightly smaller (5v5) than the console/pc version of The Yard and there is no online multiplayer.

So will The Yard set the Madden world on fire?  It’s hard to tell.  We didn’t play the game all that long, but it was one of EA’s more interesting takes in trying to make a more palatable aspect of their game.   A trend that we’ve seen in just about every major sports game as they become more and more realistic, alienating more casual fans.  Seeing the creativity possible in designing on-the-fly plays that resembled something that you’d be way more likely to see in a flag football game than an NFL game, The Yard just might hit the spot that exists purely because of the non-existence of an arcade football experience. (At least right now anyway).  Or maybe, it’s just EA readying themselves for whatever 2K will be throwing their way when their take on arcade football arrives in 2021.

Home / Original Articles / Madden 21 – The Yard: Everything We Learned From our Hands-on