The Fighters Pass delivers another hit. Every Super Smash Bros. Ultimate DLC fighter has felt noticeably different from the main cast, usually due to one or two major gimmicks that give them a unique playstyle, but Min Min absolutely takes the cake as Smash’s strangest DLC fighter yet. Even though Joker has Arsène, Hero has his slot machine filled with spells, and Terry has his super special moves, Min Min still feels like the weirdest of the bunch, primarily because she doesn’t necessarily feel like a Smash character at all.

That’s not to say Min Min is a bad character; she’s incredibly fun to play and she’s a welcome addition to the now 80+ strong Super Smash Bros. Ultimate roster. It’s just that her moveset is so faithfully lifted from Arms that she works a little differently than everyone else. The majority of Min Min’s moves, from her tilts to her aerials to her smash attacks, relies on the set of arms she has equipped at any given moment. Hot-swapping arms on the fly and mixing and matching depending on the situation is the key to success with Min Min, and it definitely takes some getting used to.

Min Min is unique in that she doesn’t have a traditional set of special attacks mapped to the B button. Instead, her left arm is mapped to the A button and her right arm is mapped to the B button, and pressing either of these buttons will send the respective arm flying forward across the stage. Min Min’s left arm is always equipped with the Dragon, which can fire a powerful laser after fully extending, while her right arm can cycle through three different types of arms by pressing down B. Launching these arms across long distances is Min Min’s bread and butter, and the same control scheme applies both on the ground and in the air. Min Min’s side tilt attacks also make use of her arms, meaning the majority of her arsenal is just some variation of long-range punches. While Min Min has a fairly different kit from the rest of Super Smash Bros. Ultimate’s roster, the parts of her moveset that don’t utilize her arms are pretty standard. Her down tilt, up air, and neutral air are great moves for combos or safe hits, and her up smash even has the added benefit of being able to reflect incoming projectiles. 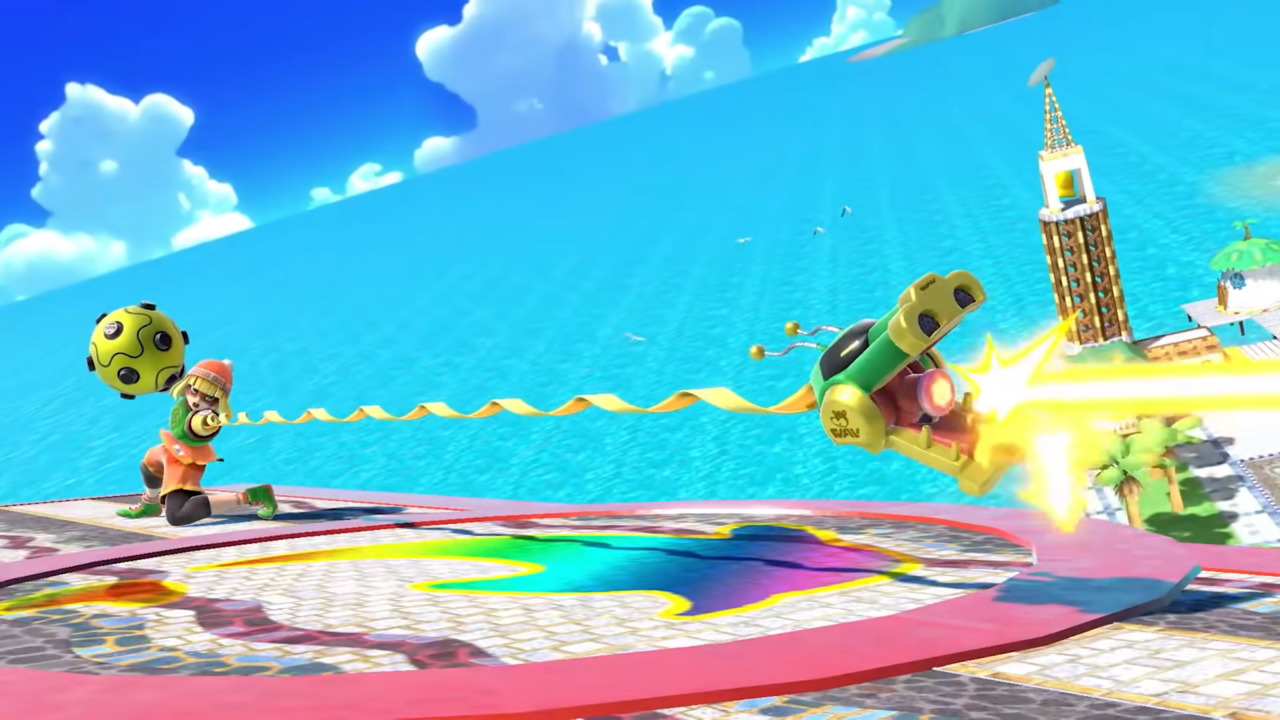 Min Min can also use both her arms while moving, allowing her to maintain pressure while retreating, and the arms can even be used in multiple directions simultaneously. If someone sneaks up behind you in a free for all after you land a charged smash attack, you can just send your other arm flying behind you to defend yourself from the impending ambush. For one on one scenarios, both arms can be used at the same time in the same direction, which can allow for some pretty nasty mix-ups. You can force your foe to jump and dodge your first attack and curve your second arm upward to catch them by surprise. You have a surprising amount of control over both of Min Min’s arms at all times, and the skill ceiling with this character is very high.

As I mentioned above, there are three different arm types for Min Min’s right arm. She can equip a second Dragon to go along with the one permanently equipped on her left arm, granting her even more range than usual thanks to the Dragon’s deadly laser. The second arm is the Ramram, a quick arm that sends a disc flying out that circles above the arm and back to Min Min. It’s not a controllable projectile or anything, but the disjointed nature of the attack can catch enemies off guard if you condition them to dodge your attacks by jumping over them. Finally, there’s the Megawatt. The Megawatt is devastatingly powerful, but it’s slow to make up for that fact. Still, if you manage to land a charged Megawatt hit, you can send practically anyone to the blast zone even from center stage. Mixing and matching these arms and surprising other players with quick swaps can lead to some exciting plays, but it definitely takes some practice to get used to Min Min’s playstyle. 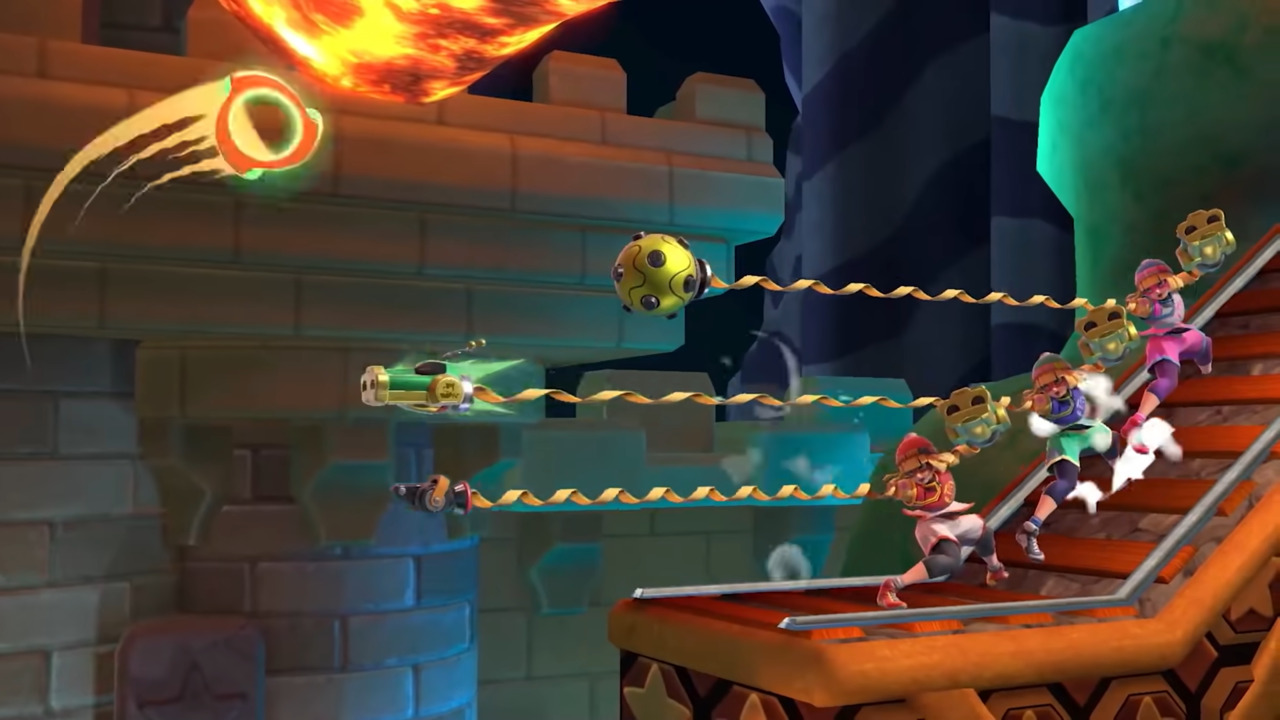 Spring Stadium, the new stage added alongside Min Min, is fairly standard, although it does have a few fun tricks up its sleeve to separate it from the ever-expanding Super Smash Bros. Ultimate stage list. There are launch pads on each side of the stage, allowing you to get some serious air. There’s also a ceiling at the top, although it doesn’t cover too much of the top blast zone. The launch pads are the real highlight of the stage, and when you pair them with Min Min’s insane range, you can end up with some incredibly hype moments. It’s a great stage for both casual free for alls and more competitive 1v1 matches. There aren’t a whole bunch of gimmicks like some of Smash’s other stages, but it’s not as vanilla as something like Final Destination, making it a nice middle-ground. Spring Stadium also has the benefit of having Arms music, which is arguably the best part of the stage. There are 18 tracks total, and while it’s a bit disappointing that only 2 of them are new arrangements, the rest are still just as catchy as they were in the game’s initial 2017 release.

Both Min Min and Spring Stadium are welcome additions to Super Smash Bros. Ultimate, and they mark a strong start for Fighters Pass Vol. 2. There are still five more fighters and stages on the way, and if they’re anywhere near as creative and unique as this one, then we’re in for a treat with Smash’s upcoming DLC lineup. If you want the entire second Fighters Pass, you can pick it up on the Nintendo eShop for $30, which will also net you a bonus Ancient Soldier Gear outfit for Mii Swordfighter. If you just want Min Min and Spring Stadium, then you can pick up Challenger Pack 6 for $6. Also, while they’re not fully-fledged characters, several new Mii costumes have also been released, bringing franchises like Fallout to Smash for the first time ever.