Mortal Kombat X Kombat Pack 2 DLC Impressions – Is It Worth It?

The latest news in the world of video games at Attack of the Fanboy
March 4th, 2016 by Dean James 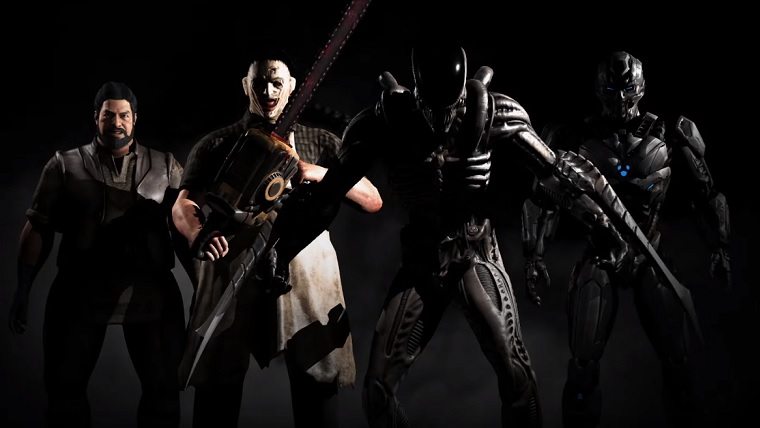 Mortal Kombat X was already loaded with content at launch nearly a year ago, but NetherRealm Studios has continued to provide gamers with even more content in the time since. Now Kombat Pack 2 has arrived with even more fighters, which begs the question, is this new DLC worth it?

Alongside the release of Mortal Kombat X last year, you were able to purchase what was essentially a season pass that was known as the Kombat Pack. Over the few months following the game’s launch, the roster was expanded by four with the addition of Jason, Predator, Tanya, and Tremor.

As these were released separately, each character was reviewed individually. Each one managed to bring a fun experience to the game and really felt like a bargain for the price with the three different varations, so it was easy to recommend all four. As a result, NetherRealm certainly had a lot to live up to with its second round of DLC in Kombat Pack 2.

Just like the first round of DLC, two of the new fighters are based on iconic movie characters while the other two are familiar to the Mortal Kombat franchise. To best explain about the four characters, each one will be talked about individually and then discussed together as the Kombat Pack 2 at the end.

Starting off is the horror icon Alien, also known as a Xenomorph, from the Alien movie franchise. The Alien looks fantastic in design, as if it was taken right out of a movie and put into the game. As with most of the other characters, its three variations bring a little bit of a change in design, though its changes are pretty minimal. When switching between them, the only part of the character design that is altered is the top of their head, which offers three different designs. One is a smooth flat look, one has small ridges, while the last has a much more prominent spiked head design.

The Alien is not only very well designed in its looks, but also its collection of moves that can be used. NetherRealm did a great job at implementing moves that feel very natural for the character, such as crawling on the ground and using the tail to attack. The X-Ray attack also is very brutal and has the tail being used for the brunt of the move. While this character is obviously based on the Alien that you will recognize, Mortal Kombat X actually managed to mash it together with another MK character that was left out of the game.

Baraka is a fan favorite of the series that many wanted to see added to the game. However, instead of doing that, they chose to take the Tarkatan moveset that Baraka uses and mixed it into the Alien’s moves, especially with one variation. In fact, they wrote a backstory for the Alien that had it taking over a a Tarkatan soldier and becoming a hybird creature. This was an innovative way to bring something both new and old to the game in one character. 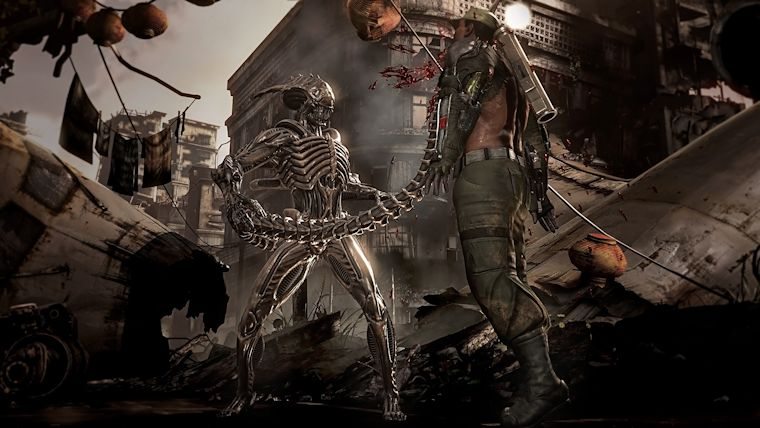 Alien of course has the Tarkatan variation that gives it attacks that utilize the signature Tarkatan blades, but it also has two others that are called Acidic and Konjurer. These variation names are pretty self-explanatory, as Acidic gives you a few acid based attacks while Konjurer allows you to summon drones to help you in battle. Each one only adds a few new abilities, but they are still different enough to where you certainly will want to see what works best for you.

Besides the Alien, the other movie based character that is added in Kombat Pack 2 is Leatherface from the Texas Chainsaw Massacre franchise. Leatherface’s design in Mortal Kombat X is a lot more varied than the Alien, as his entire outfit changes depending on its variation. The Killer variation has him wearing a plaid shirt and a short blue tie with an apron and a dirty white mask. The Butcher variation doesn’t feature a major change, with a red plaid shirt under an apron, though with a much darker and rough mask, which is more based on the 2003 remake. The Pretty Lady variation is the most different, as Leatherface is dressed in a nice blue suit with a more clownish looking mask that is covered in makeup.

Naturally, Leatherface has his signature chainsaw that will be used for a majority of his attacks, but he can attack without it as well. His large stature makes him slower than many fighters, which can definitely take some getting used to. The chainsaw attacks really do help to provide a lot of range for him, especially in the Pretty Lady variation that gives him throwable chainsaws to use as well. Attacks like Psycho Cutter are very strong to use, though it leaves you vulnerable right after using. The Berserker variation gives Leatherface even stronger chainsaw based attacks to use as well, while the Butcher variation then adds another weapon into the mix with his mallet. The X-Ray attack even takes both the chainsaw and mallet into one long combination that can deal out major damage. None of these variations are too incredibly different, but they add just enough to make them worthwhile. 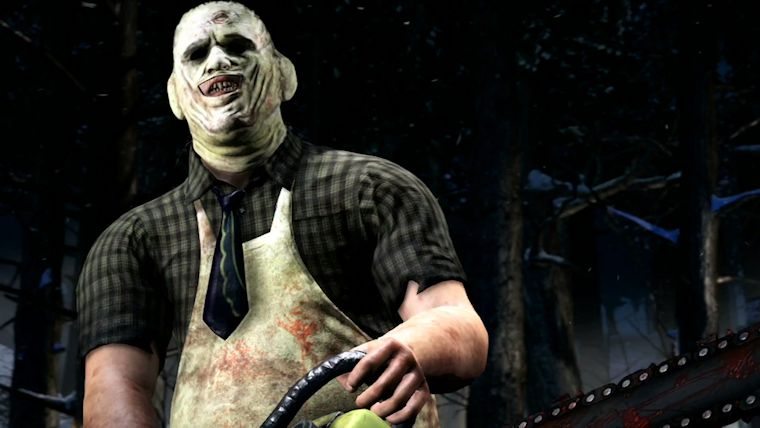 With how gory the Texas Chainsaw Massacre movies are, of course Leatherface would have to have some absolutely brutal fatalities in Mortal Kombat X. The Seeing Double fatality starts off like the X-Ray attack by taking your chainsaw right into the torso of the opponent, but then he pulls it up right out through the head to cut the upper half completely in two vertically. The Hook and Sinker fatality instead uses takes a more horizontal approach by stringing up the character with a chain and then using the chainsaw to cut the upper and lower halves of the body apart.

The next character added via Kombat Pack 2 is a fan favorite in Bo’ Rai Cho, who actually appeared in the story mode for Mortal Kombat X already. Bo’ Rai Cho has always been known for his very outlandish moveset that builds off his drunken master style, complete with fart and puke attacks. While some may have been worried that this would be changed, he is still the same Bo’ Rai Cho that you know and love in Mortal Kombat X.

Unlike the two movie characters, Bo’ Rai Cho does not change hardly at all in design between his different variations. In fact, two of them seem to be identical, while the other features a little color change, plus the addition of that variation’s special weapon. Bo’ Rai Cho’s moveset is a lot of fun to use as the bulky fighter, though that can mean he’s a little slow. However, he packs a wallop with his attacks when he lands them. His Fart Cloud not only damages the enemy, but also stuns them for a short time, while he can use his Belly Bash attack to knock the enemy away after. The only disappointment is that his puke attack is relegated only to the X-Ray move this time.

The three variations given to Bo’ Rai Cho each add a new mechanic to his moveset, much like the other new fighters in Kombat Pack 2. The Dragon Breath variation gives him some fire based attacks, which can be used directly on the opponent or as a temporary stage hazard. The Bartitsu variation gives him a staff to use in battle, which he manages to utilize in a few ways. One is to do a flying kick, while the other two work well in tandem with one grabbing the opponent and the other dealing rapid damage. This staff isn’t as effective as Kung Jin’s staff variation, but it still is very useful in battle. Bo’ Rai Cho’s third variation is the fittingly named Drunken Master variation, which brings in the Drunk Level mechanic that augments certain special and normal attacks. This is a lot of fun to play around with as it is one of the most unusual variations in the entire game. 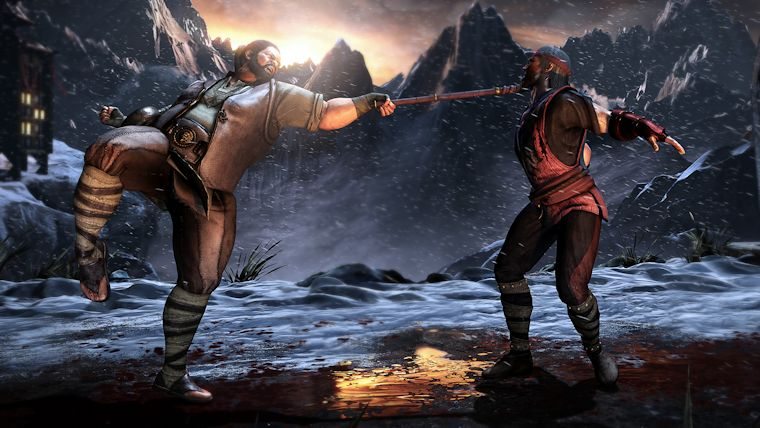 The drunken Bo’ Rai Cho of course has an alcohol based set of fatalities, with Booze You Lose having you fill the opponent’s mouth with alcohol and then throwing a match in to blow their entire upper body to pieces. The other fatality takes a similar route with Bottoms Up, which starts off in the same way by stuffing alcohol in the opponent’s mouth. However, this time it has something extra in it that forces them to spit up their insides in gory fashion.

The final fighter added in Kombat Pack 2 may be the best of all with Triborg, who is actually not only three characters in one, but four. Triborg takes on the form of the cyborg characters that were left out of the game, with a completely distinct variation dedicated to each one. The three on the surface are of course Sektor, Cyrax, and Smoke, but you also have access to Cyber Sub-Zero as well with a simple button combination on the selection menu.

While the basic moves and such are the same between the forms, all of the variations for Triborg are completely different with their special moves. Sektor has his classic missile based attacks and ability to use a Teleport Punch. Cyrax has his Net and Chest Saw, along with the hard to master barrage of bomb attacks. Smoke is maybe the most fun to use of the Triborg forms with his smoke based attacks that allow him to go invisible, quickly move backwards and cause the enemy to be teleported upward, which sets up for great combos. Lastly, the Cyber Sub-Zero variation gives you the moveset you would expect from Sub-Zero, such as Ice Ball and Slide, but also with some cyborg based moves from the last game like Ice Bomb and Drone. 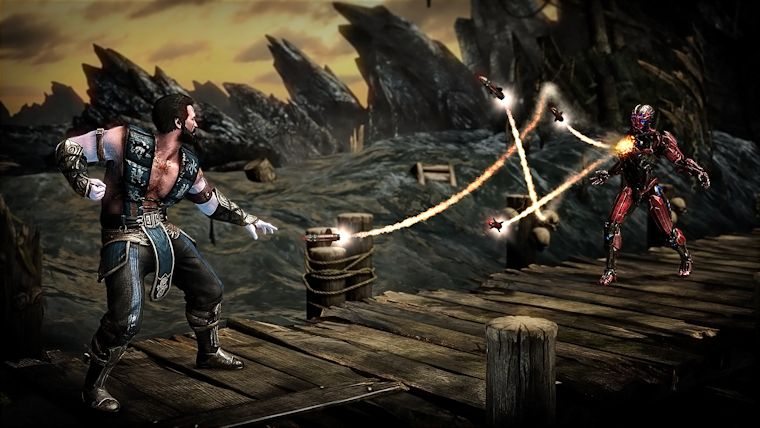 The only thing that is a little disappointing is that Triborg has the same two fatalities available for all the variations. Teamwork has Sektor, Cyrax, and Smoke show up and work together to rip apart the opponent, while Death Machine has the regular trio turning into a crusher machine that smashes the opponent into a cube. With some of the fantastic fatalities from these individual characters in the past, it would have been nice to see maybe each form getting one unique fatality. Also, even if you are using Cyber Sub-Zero, only Sektor, Cyrax, and Smoke actually show up in the fatality, which takes a little away from it. Outside of the fatalities though, Triborg is an absolutely excellent character to have added to the game.

Mortal Kombat X’s Kombat Pack 2 brings plenty of new content with each of the four discussed characters. Making it even better is that Alien is almost like two in one with the Tarkatan based attacks, as well as Triborg being like four character in one. While you are buying four fighters, it almost feels more like eight instead, which makes the Kombat Pack 2 a heck of a bargain. Not only are you getting these characters, but also a few new skin packs as well.