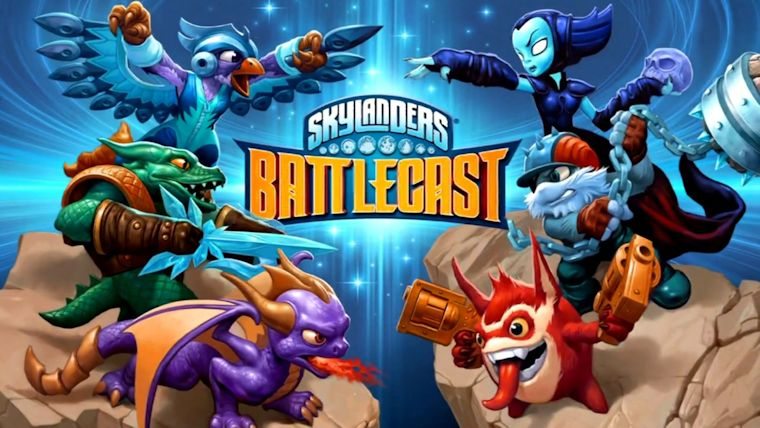 The Skylanders franchise just revealed their next annual entry in the series with Skylanders Imaginators that is set to arrive this October, but that is not quite the only game the series is getting this year. While it definitely is a lot smaller in scale, the franchise has once again gotten a new mobile game, this time using a card based mechanic in Skylanders Battlecast.

Like many mobile games, Skylanders Battlecast utilizes a free-to-play system to where you can download the app completely free and still enjoy it without paying anything, but you will earn much more by spending actual money. The unique twist here though is that you can not only buy new content from within the game, but also through actual real life cards that can be transferred into the game.

As of the launch of Skylanders Battlecast, you have the option to purchase one of two different Battle Packs that provide you with three specific characters cards or the completely randomized booster packs. The two available Battle Packs each retail for $9.99, while booster packs retail for $4.99. For anybody familiar with card games like Magic The Gathering, you will know how random packs can be, so buying them is always going to be a game of chance. With whatever cards you do get physically, you can simply scan them into your game by using your mobile device’s camera, though these are one use only.

The pretty neat thing is that you actually can earn enough in-game currency by playing to buy stuff, including the two available Battle Packs. I would recommend that if you want to start playing Skylanders Battlecast, at least purchase one of the two Battle Packs and then work towards buying the other one in-game for 1,400 coins. This won’t require much grinding at all, as you can earn it just by playing through for the most part.

You also have the option to purchase booster packs inside the game as well using 500 coins, which will be random like the real packs. For those that may be worried about getting duplicates in booster packs, the good news is that getting a duplicate will actually power up that card beyond just having one of these. If you are looking for a specific card however, there are also the featured cards that rotate daily that you can purchase.

Even if you do choose to not buy anything at the start in-game or physically, you can still play Skylanders Battlecast with a basic roster of cards. However, just like those familiar with the games will know, it is always better to have a roster of characters to choose from to create the best matchups.

The game offers 24 different character cards for you to collect, which can be done through the numerous aforementioned means. At the start of each match, you will be able to pick three of the characters to use. Each one has a toughness, an attack power, an element, and a special ability. These special abilities are unlocked by continuously using a specific character in each battle, which allows them to use their special ability and increase their attack power based on their level. The characters can attack once per turn themselves, but that is only part of the game’s combat system.

Skylanders Battlecast includes a crystal system that allows you to play spell cards throughout the match. At the start, you will have only 1 crystal, but after each turn, you will at random add one, two, or zero crystals to your overall pool. These allow you to use more powerful spells that involve damaging enemies, switching out characters, as well as healing. You can use unlimited spells per turn as long as you have the crystals available to use them, on top of using their attack.

The mix of attacks and spells is very solid, as it requires you to use a lot more strategy in the game. Some of the stages are more straight forward, but there are some where using a regular attack or spell first can depend on if you win or lose that time. You will also earn more coins for keeping your entire team alive, so being very careful with that is very important if you are grinding for coins to purchase one of the Battle Packs or booster packs.

Skylanders Battlecast offers players both a story and versus mode to choose from. The story mode is pretty simple in setup, with you venturing across the different elemental realms and fighting a variety of different enemies. As mentioned above, using elemental advantages are key here and will become very important the deeper you get into the game.

The versus mode offered takes the gameplay found elsewhere in the game and matches you up with a random online opponent to play online. Winning these matches will put you on the way to completing more quests for more coins, as well as getting more practice in. You can also play friends through the friends list, though it would have been better to have it more expressly stated in the versus menu.

Skylanders Battlecast is available for both iOS and Android devices currently through either the iTunes App Store, the Google Play Store, or Amazon. For those looking to get the game on iOS, prepare to have 843 MB of space as of the latest update, with the Android version coming in smaller at 506 MB.

Free-to-play games are certainly not for everyone, but Skylanders Battlecast is definitely one of the better ones you can choose from out there. There are still the paywalls that will force you to grind to get access to everything in the game, but the fact that you can buy one Battle Pack and then earn the other fairly quickly in-game is pretty great. The combat actually has a surprising amount of depth with the variety of different cards that you can use, along with using familiar characters from the franchise. Skylanders Battlecast may not be for everybody, but it’s certainly a good time waster on mobile devices that adds in a collectible side with the physical cards.