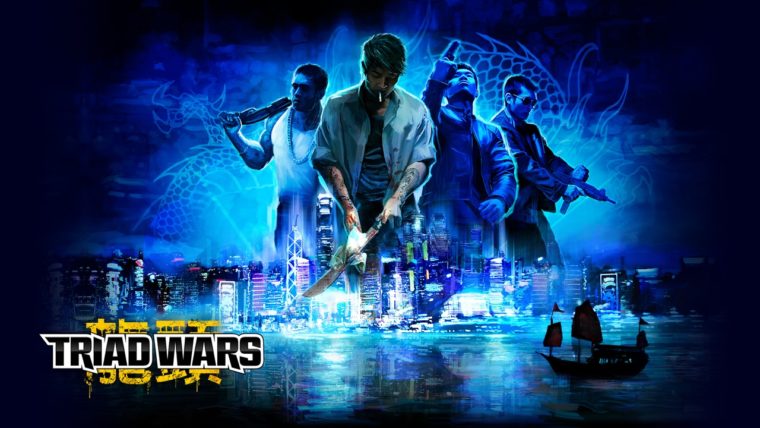 United Front Games have returned to the brutal, hard-hitting universe of Sleeping Dogs, but it isn’t to create a sequel to the Hong Kong-based cop tale. Instead, the team behind Wei Shen’s journey is showing us their world from a whole new perspective with Triad Wars in its current closed beta state. This player-driven story puts players behind a customizable Triad member dedicated to proving himself. That means badges and hard-boiled justice have been traded in for racketeering and bloody turf wars. It’s a welcome departure from Sleeping Dogs that retains the core mechanics and gritty nature of its source material while also expanding heavily on the formula. The result is a familiar open-world action-adventure with added base-building and strategy elements. Oh, and did I mention that Triad Wars is free-to-play?

Triad Wars opens up with players having to commit to one of three established gangs — 18k, Shing Wo, and Sun On Yee. Devoting yourself to one of these criminal organizations kicks off a felony-filled ascension to the top. The only way up is through the accumulation of Face, a respect-centered XP of sorts tied to a rank system that shows where one stands within a gang. Getting there won’t be easy, however, and the game’s use of asynchronous gameplay will test rising thugs against other players’ growing empires. It’s an engaging system, to say the least.

Let’s back up a bit. The created criminal starts at the bottom and has to work his way up in this seedy underworld of murder, money and misdeeds. The player establishes their main base of operations and it’s fairly barebones in the beginning. You might have a single counterfeit operation going in the early moments, but it will soon explode into a whole slew of unlawful activities. Controlling the bus systems, producing knock-off electronics, and exporting less-than-legal animal parts are all options that can be used to expand your “business”. Rivals will take notice of your achievements and will come around to knock you down a peg. This is where the strategy aspect of Triad Wars comes into play. Upgrading your base and ensuring it runs as a well-oiled machine is imperative to advancing through the ranks. Racket bosses can be obtained and additional workers can be hired to gain bonuses (ex: lowered production time) and defend the stronghold. Players are given the choice of what rackets go into their base, how it is laid out, and how upgrades are distributed. This comes in the form of top-down base-building maintenance and construction gameplay. Figuring out what works best to maximize income and security is an addicting endeavor. 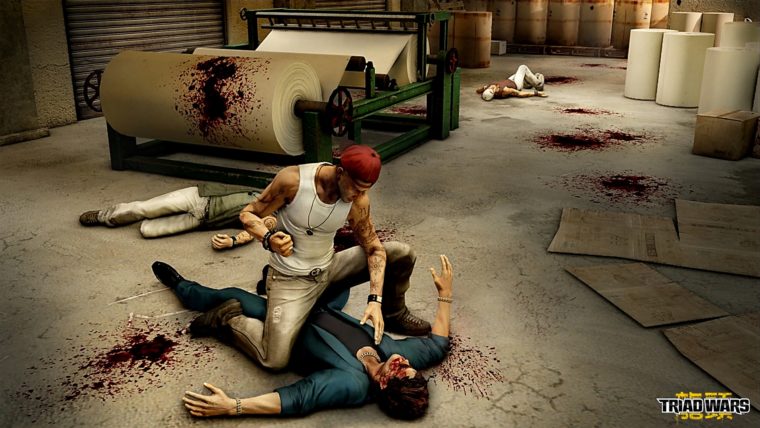 So, you’ve set up your base. Now what? Now it’s time to go knock down the doors of your rivals’ bases. Rival’s bases appear on the map and open up an opportunity to disrupt their operations and procure crucial materials/items. Raids, as their called, are timed missions that see the player plowing through groups of enemies (unarmed and armed variants appear as difficulty rises) and face off with a computer-controlled version of another player’s custom character. Dashing through various rackets and pummeling baddies using Sleeping Dogs’ tried-and-true combat system is insanely satisfying. The punches land with notable weight and the merciless environment finishers are back. It makes each raid engaging, even if repetitive layouts and tactics make it feel a little mindless at times. As previously mentioned, time is not on your side. Should time expire, the cops will show up and produce a set of new problems as well as ending the raid. By visiting the red stopwatch missions scattered around the map and completing them, time is added to the overall limit on the raid. These side missions are completely optional, but since you usually get to crack a few more skulls and gain additional minutes to run a successful raid, they’re more than worth it. That extra time can add a comfortable cushion and allow for more exploration. Plus, the more time you have, the more objectives you can check off with ease. Doing more directly translates to how much Face you gain and how much Face is taken from the rival’s character.

Raids may be a main focus, but the map will also populate with other mission types over time depending on the type of work you’re involved in. During my time in the beta, escort-style export missions appeared and provided a nice change of pace from the usual on-foot combat scenarios with their focus on utilizing firearms from within a moving vehicle. Exclamation points cropped up now and again, pointing the way toward an opposing gang member in possession of a Favor card. Favor cards are items of varying rarity that unlock bonuses, buffs and customizations. These can range from a 48-hour defense buff to permanent weapon unlocks. The first Favor I cashed in on was a one-hour access to the hammer melee weapon in my loadout, allowing me to temporarily go all Oldboy on player’s stronghold staff. The random drop nature of these favors keeps things exciting and generates a craving for more until you see that ultra rare card spill out of one of the packs. 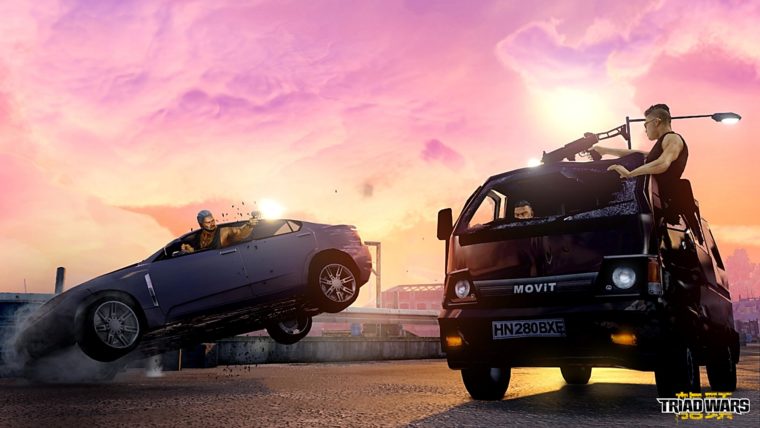 All of that being said, I must return to an aspect of this game briefly mentioned earlier. Triad Wars is free-to-play and, as such, has many systems in place that reinforce this model. Nearly everything is on a timer or cooldown, similar to other F2P title Warframe. Gold is used in-game to purchase customization items, card packs, and vehicles. Gold is attainable via jobs (daily objectives), trading in Favor cards, and converting in-game cash. From what I’ve seen thus far, these yield fairly low amounts of Gold and the cash conversion process takes a full 24 hours. Grinding for this currency can be completely avoided by pulling out your real-world wallet and purchasing a sum of Gold directly. This isn’t anything new for free-to-play games, but that doesn’t make its inclusion any more pleasing. Is its presence worth avoiding Triad Wars all together? I think not. And this is just the beta version. United Front Games has big plans for the game and its potential is already shining through in its early stages. Triad Wars is definitely one game to keep an eye, especially if you happen to be a fan of the Yakuza games. Triad Wars definitely scratches that itch to an extent.