Wolfenstein 2 Switch Preview – A Flawed Miracle of a Port

Like DOOM, it's a miracle that this game runs as good as it does on the Switch, but we have some reservations. 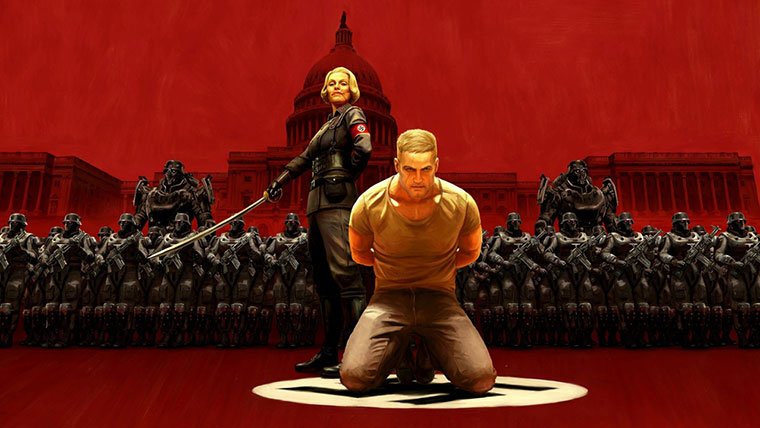 Near the chaos of the PAX East 2018 show floor Bethesda held their own event, allowing fans and press to check out their current and upcoming games. The one most people seemed anxious to try out was Wolfenstein 2 for the Nintendo Switch. Following off of Bethesda’s other excellent Switch ports, fans were understandably wondering how this visually striking title would turn out on the device. I tried it out in handheld mode and was extremely impressed with the work put into porting the game, though some major flaws have me wondering if it’ll be worth it if you can play the game elsewhere.

First off, it’s simply amazing that this game runs on the Switch, especially as well as it was at the Bethesda event. The visuals were great, and everything ran smoothly. While the framerate and resolution are lower than its PC, PS4, and Xbox One counterparts, the Switch version of Wolfenstein 2 still looks great, even playing on the handheld screen.

But that screen does cause some issues that will certainly make players want to stick their console in the dock and not remove it unless absolutely necessary. For one, the tiny screen makes everything harder to see. Granted, the flashing lights of a Boston hotel bar aren’t ideal for gaming, but even simple stuff like spotting enemies, or finding your next objective was very tough due to the size and darkness of the screen/graphics. Text was especially troublesome, though I could see the developer (Panic Button) working that out before release.

Controls were pretty standard when the gyro aiming was turned off. Once on, players can move either the controller/Joy-Con or the system itself to fine tune their aim. Normally I love this feature, but it felt a little off in Wolfenstein 2 at this point. Whether that was just my crappy aim or not, the option is there for those who prefer it and I definitely think there will be many who do. The finer aiming allowed by moving a Joy-Con is a nice touch, after all.

After about thirty minutes of playing Wolfenstein 2 on Switch I came away thinking the same about the game as I did about DOOM. As I said in my review it’s a shock that the game works at all, let alone as well as it does. Still, sacrifices were made in the transition. Graphics will be worse across the board, and in handheld mode there’s a few real problems. There’s still time for them to get patched up, but even if they don’t the portable nature of the system will be the selling point for some. For those who don’t want to take Wolfenstein 2 on the go, the other versions will probably still be the better choice.