A shockingly huge amount of references in less than 90 seconds. 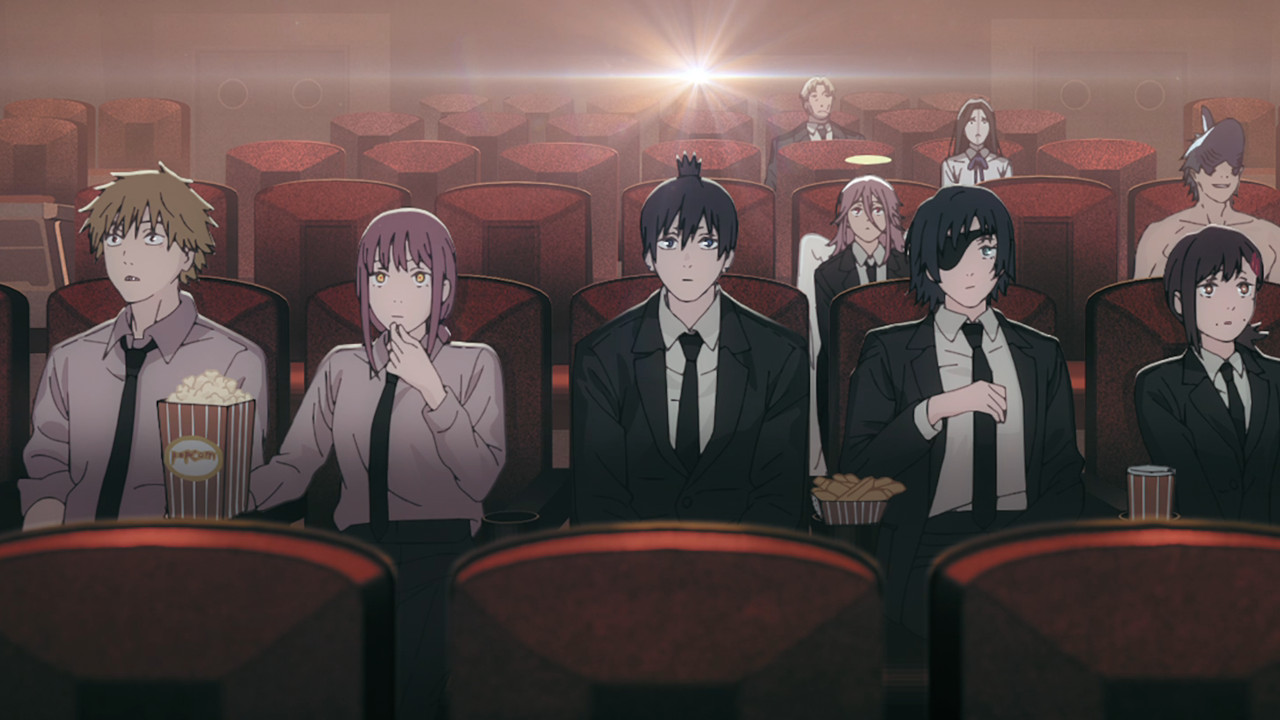 Chainsaw Man is an exceptional new anime adapted from the 2018 Shonen Jump manga of the same name, debuting its English sub on October 11, 2022. It features a fittingly preposterous premise, wonderfully subtle animation, dark humor, and loveable characters. The show is visually spectacular and part of this appeal is an appreciation for popular and influential cinema, as evidenced by the manga’s creator, Tatsuki Fujimoto, a self-professed cinephile. The show faithfully represents this love for movie and pop culture references in the form of a bizarre, incredible opening title sequence for the Chainsaw Man anime.

Chainsaw Man: What Movie References Make the Cut in the Opening Titles?

There are over a dozen notable movie references in the opening sequence for Chainsaw Man. The opening might seem like a fever dream of small scenelets featuring the show’s main cast doing seemingly unrelated activities, and if you don’t know what they’re referring to, you’ll be understandably lost. Here’s our list, in order as they appear:

1. The Chainsaw Man Opening Begins with a Reservoir Dogs Reference 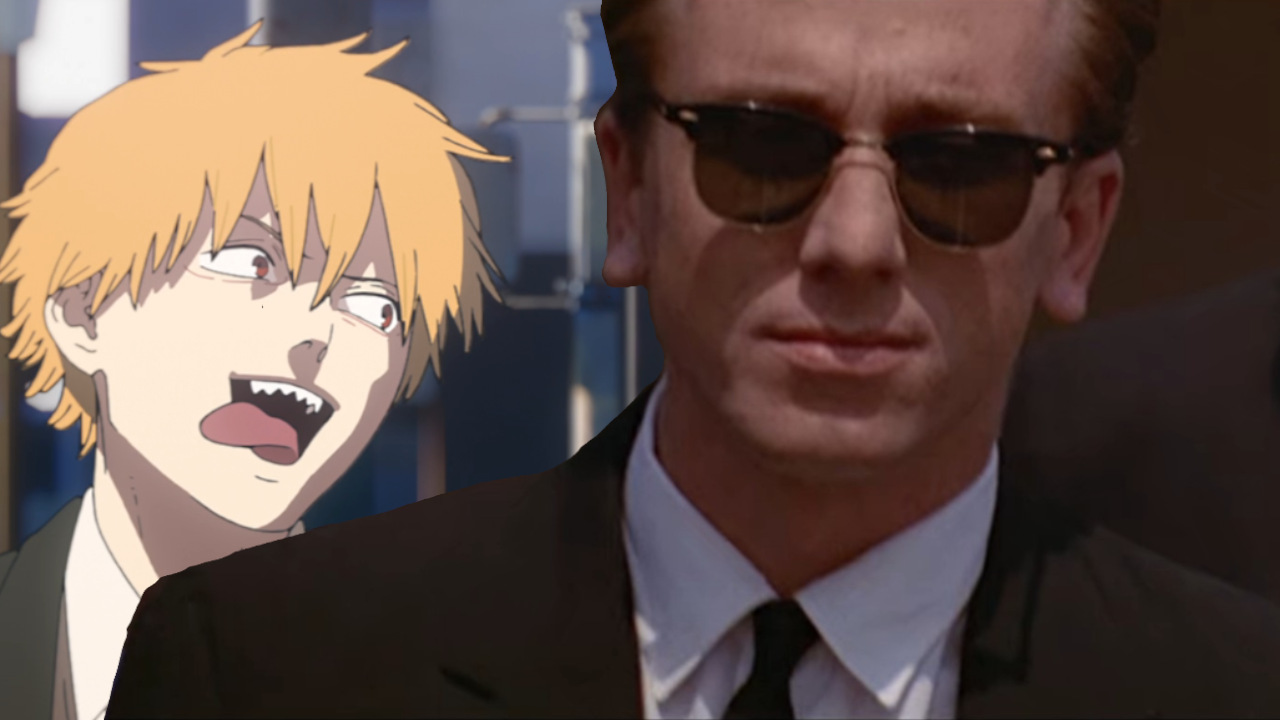 What’s more satisfying than a slow-mo walking shot with a sweeping shot of the main characters, decked out in some pretty killer suits? Not only is this a clear reference to one of the greatest films ever made, but it’s just so utterly appropriate, and still in keeping with the show, and the Public Safety Devil Hunters’ dress policy. Much like in the Tarantino film referenced, there’s a good deal of infighting.

2. The Texas Chainsaw Massacre (1974) Makes a Strong Showing with a Creepy Tableau Here we see an interesting take on the horror classic with protagonist Denji cradling his adorable chainsaw demon pet, Pochita in a graveyard with a clear visual reference to this shot from The Texas Chainsaw Massacre. Even the atmosphere is eerily accurate, complete with a desiccated, starving Denji looking not too far from the corpse in a would-be art display from the film. Certainly more on the dark side, but fitting for the violent content in Chainsaw Man, and of course, well, the weapon of choice. This particular shot is fascinating just because it was posed and framed to be perfectly alike the matching scene in Pulp Fiction. Kishibe is a tough customer, an extremely strong veteran hunter with Public Safety, with a love for booze, women, and killing devils. If anybody can pull off the badass vibe of a Samuel L. Jackson character, it’s likely Kishibe.

4. Sadako vs. Kayako Makes a Surprising Appearance in the Chainsaw Man Opening For those unfamiliar with Japanese cinema, this is literally a showdown between the characters from The Ring and The Grudge, initially teased only as an April Fools’ prank in 2015 before being confirmed as real by December of that year. It’s silly and obscure to the casual western viewer, but it’s in the same vein as Freddy vs. Jason, Alien vs. Predator, Batman vs. Predator, and Archie vs. Predator. For those who look down on these films, a true cinephile sees the value in even silly movies, and Fujimoto is no stranger: he has put Sharknado references in this series.

5. Attack of the Killer Tomato Devils — Among the Most Surprising Movie References in the Opening The West, having heard that movies leaning on the sillier side can also make the cut, have this peculiar 1978 treat, Attack of the Killer Tomatoes. It was made as a parody of horror B-movies, with the most farfetched premise possible. Even though the film was more critically panned than most entries on this list due to its satire missing the mark, and it coming off more as a Scary Movie-level series of parodies played up for some simple laughs, there are a few memorable moments like the one imitated above.

6. Galgali Doing His Best Impression of Anton Chigurh from No Country for Old Men Galgali seems like the perfect candidate to stand in for Chigurh — he’s weirdly polite yet an embodiment of violence and given his distinction as a Fiend, his status of human is somewhat muddy. Anton Chigurh is a seemingly unstoppable force, another Cormac McCarthy unstoppable evil archetype, pulled off wonderfully with surreal inhumanity meant to reflect a post-9/11 fear of ‘the other.’ This shot is wonderfully recreated, to the point where it’s fun to pretend this is the shot from the anime, although if you look, you’ll surely be able to spot where it shifts to the live-action scene above. If you’ve not caught on already, this is what artists in the industry might call a “pastiche” or artistic work that imitates the work of another artist, work, or period. Given that references to movie projects of director Quentin Tarantino feature prominently in the Chainsaw Man opening, this is remarkably fitting — Tarantino is renowned for his artful pastiche as well. Kill Bill is a pastiche for Lady Snowblood, and Jackie Brown is another for Foxy Brown. But with all this talk about chainsaw men, where’s the abundance of Evil Dead references?

8. Don’t Look Up Would Definitely Be Freakier with Power Don’t Look Up (not the Netflix DiCaprio one) was a 1996 feature film and essentially director Hideo Nakata’s J-horror prototype before he made Ring. It depicts a troubled production of a war film on what becomes increasingly apparent to be a haunted set. It certainly looks very dated now and can be hard to get your hands on a copy aside from internet archives, which can result in a dip in quality, thus the lack of comparison images for now. But this scene is taken straight from the film, juxtaposed laughter and terror included. Jacob’s Ladder was a huge influence on Japanese pop culture and horror trends, including inspiring the visual style and techniques used in Silent Hill. One of the most notable techniques used was recording an actor shaking their head at a low frame rate, but playing it back in super-fast motion for horrific effect. It was at times psychological horror, and at other times body horror, and it’s certainly an interesting choice of reference. But the use of the Angel Devil is quite excellent, as in the film this appears as Gabe, Jacob’s son, who walks his father into the light, only for the film to show this as him accepting death in the present day, 1971. “The devils are really angels, freeing you from the earth.”

10. Constantine Is a Fitting Reference in the World of Devil Hunting While there was an initial backlash against the film for its differences from the Hellblazer comics, cinephiles noted the distinctive visual style and interesting themes present in the film. It’s also a bit on the nose when compared to other movie references in the Chainsaw Man opening, given the film’s plot connections to the occult and Satan.

11. Messiah of Evil’s a Clever Reference for Readers of the Manga who Know How the Scene is Relevant This movie theater scene seems to be a reference to a particularly noteworthy 1973 film, Messiah of Evil, particularly an iconic scene that takes place in a movie theater. Note the similarities, namely one key prop commonly shared between characters, and think about what happens.

12. Cleanliness Is Godliness in The Big Lebowski and Chainsaw Man The imagery used here is pretty clear, and the parallels are quite amusing. What’s funnier is to think that John Turturro, seen here portraying Jesus and carrying out a rigorous ball-cleaning, would later play crime boss Carmine Falcone in 2022’s The Batman.

13. Chainsaw Man References the MCU, or at Least Their Graphics Department We’re surely not the only ones to see it, right? The gradients in the font, the 3D letters coming right at you? This one seems to be a superficial, stylistic reference rather than outright a film reference. And yes, the logo placement was necessary when making this revision.

14. Power Treating the Giant Art Piece from Fight Club as a Croquet Ball This was a surprising reference for sure, out of all the Fight Club scenes. But it is a visually striking moment, an instance of domestic terrorism, but spun in Chainsaw Man as an obstacle for Denji to dodge while Power literally is just having a ball using it for sport.

These are the movie references in the Chainsaw Man opening titles:

On top of these film references, the opening titles have scenes mimicking the following:

Chainsaw Man has an absolutely staggering amount of film and pop culture references in less than a minute and a half thanks to this opening sequence. That’s not even counting the references seemingly made throughout the series, which you’ll likely get to see soon enough. One thing is for sure, Fujimoto’s tastes are at times incredible, at other times surprising, but a delight to behold. See if you can spot additional references, such as the Leucochloridium scene, but blink and you’ll miss them!

Attack of the Fanboy / Entertainment / Chainsaw Man: All Movie References in Opening