That's him, the blue hedgehog! 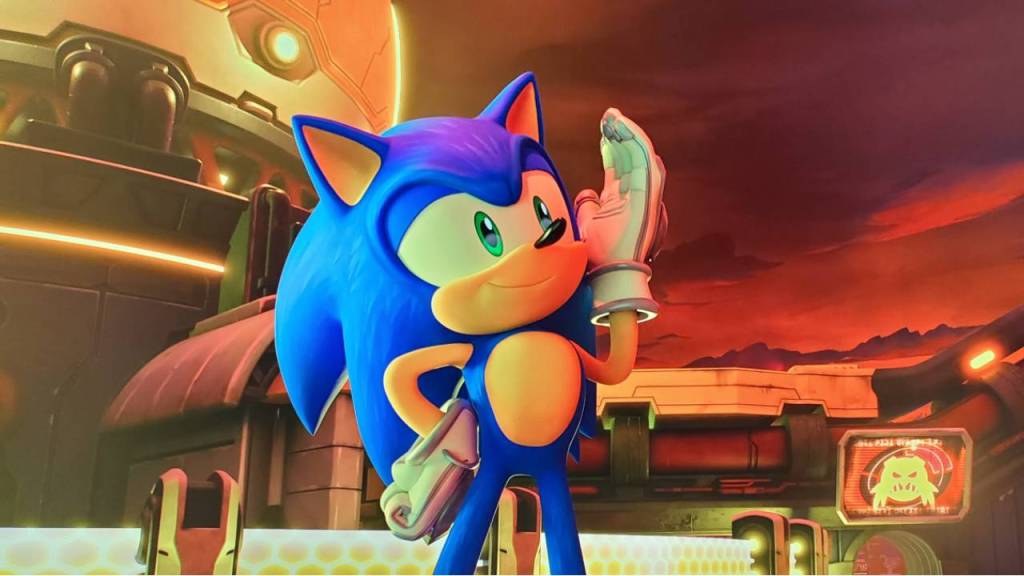 Sonic Prime is a CG-animated Netflix series produced by SEGA, Wildbrain, and Man of Action Entertainment. In it, we see the Sonic franchise enter the multiverse when Sonic breaks the Paradox Crystal while fighting Dr. Eggman. What follows is a fantastic mashup of everyone’s favorite Sonic characters, and the show creates fun alternate dimensions for us to explore. So, how does Sonic Prime hold up to other Sonic television shows and games? How does the new cast compare to the existing cast? What does Sonic Prime bring to the table, and does it add to the franchise that has been around for the last 30 years?

The Setting – Shatterverse and the Parallel Dimensions

Sonic Prime starts with Sonic running to save his friends in Green Hill, which is home to him and his friends. After Sonic recklessly smashes into the Paradox Crystal, we see him being transported into the Shatterverse, which acts as the hub world between all the parallel dimensions we got to see during the events of season 1. Each parallel dimension, also called Shatterspaces, is a unique version of Green Hill that changes the environment and the characters’ behavior.

Sonic Prime breathed life into the franchise by introducing The Shatterverse and the Shatterspaces. I was looking forward to seeing what Green Hill would look like next episode, which made me want to watch more of the show in one sitting, making it binge-worthy.

The Characters – Sonic and Friends

Sonic and all of his friends make an appearance throughout the animated series. We see Sonic, Tails, Knuckles, Amy Rose, Rouge the Bat, and Shadow the Hedgehog. However, where these characters shine are the alternate parallel dimension versions of themselves. Their behavior is changed based on the parallel dimension they find themselves in, which adds to the fun.

For instance, when Sonic visits the Boscage Maze, we find that this dimension’s version of Tails is Mangey Tails, a more feral version of Tails that lacks the intelligence of his typical self. We don’t often see Tails outside his intelligence, so I got a kick from seeing him crawling around on all fours and acting like an actual fox.

On the villain side, we get to see Dr. Eggman plus new parallel dimension versions of him that form the Chaos Council, which is entertaining. For instance, Dr. Babble is an evil human baby version of Dr. Eggman who shines every time he is on the screen. Dr. Deep also fights in a huge mechanical samurai suit, which is one of the best fight scenes in the show.

The Story – Restore the Shatterverse

A Sonic the Hedgehog show wouldn’t be complete without a save-the-world storyline or battles with Dr. Eggman, and Sonic Prime is no different. The first episode gives us a glimpse into the gang at Green Hill, where Dr. Eggman is baiting Sonic into a fight that helps him uncover the Paradox Prism. Once done, Dr. Eggman harvests the Paradox Crystal. Sonic comes in like a wrecking ball and crashes into the Paradox Prism, causing it to shatter and create parallel dimensions.

What sets Sonic Prime apart from other video games and television shows is the inclusion of the Paradox Prism and the parallel dimensions. I was also surprised to find that Sonic Prime stayed within the mythology of the Sonic franchise and was canon per one producer, Logan McPherson.

The Life Lesson – Sonic Teaches Us

Sonic Prime offers a lesson that everyone, not only children, can benefit from, which is how powerful friendship is and to cherish it because you genuinely don’t know what you have until you lose it. Sonic often ignored his friends, neglected their efforts, and laughed at how sentimental they were. When the Paradox Prism shatters, and Sonic is thrown into the different Shatterspaces where his friends don’t know him, he finally understands just how important his friends are.

Sonic Prime was animated by a Canadian animation company, WildBrain, and the animation feels accurate to the original characters. In fact, they feel so accurate because SEGA sent WildBrain geometry to the character models, which allowed them to create super-accurate models. From there, WildBrain uses a graphic surfacing style that fits each character properly into every unique dimension we find our favorite crew stuck in throughout the series.

SEGA also developed a new costume for Rouge and approved slight costume adjustments for every other character. The result gives us our favorite video game characters that we expect to see, but with a fresh twist. The CG used during the action scenes felt very impactful.

As discussed above, Sonic Prime was animated in Vancouver, which led to some interesting casting choices out of necessity. (You’d be surprised to hear that Canadian law prohibits non-Canadian voice actors from portraying roles in Canadian television programs). Therefore, the producers were required to recast every Sonic role using strictly Canadian voice actors.

While I was disappointed not to hear the iconic voices like Roger Craig Smith as Sonic (since 2010) and Mike Pollock as Dr. Eggman (since 2003), I liked most of the voice cast chosen for Sonic Prime. I’ll admit the new voice cast was jarring at first, but I got used to them quickly and thought Deven Mack did a fantastic job as Sonic.

The Score – Let’s Get Pumped

Sonic Prime’s soundtrack is dynamic and engaging throughout the season through its use of electronic and rock cues with an orchestra. This matches the high intensity of most episodes and gets you pumped. After watching each episode, I felt I could spin up the wall and fight some baddies. The one negative is that none of the episodes have a theme tune at the start of the episode, which is so iconic for Sonic. Still, the credits music will make you want to avoid pressing the “next episode” feature of Netflix, and you will flow naturally into the next episode.

I honestly didn’t have the highest expectations going into Sonic Prime because recent Sonic television shows and games haven’t been the best. Still, I was presently surprised. Sonic Prime being set in parallel dimensions, and seeing my favorite Sonic characters right from the start, the overall story with its primary theme, animation methods and style, and the Canadian voice cast all resulted in a fun series that I binged in two sittings.

In addition, Sonic Prime acts as a show for both experienced and new viewers of the franchise, as there is plenty of lore and easter eggs for those who’ve followed Sonic for the last 30 years but kept it easy enough for newcomers to enjoy. Sonic Prime Season 1 ends ambiguously, so I’m excited to see what is in store for Sonic and crew in season 2!