The Legend of Zelda: Tri Force Heroes Guide – How To Defeat Moldorm 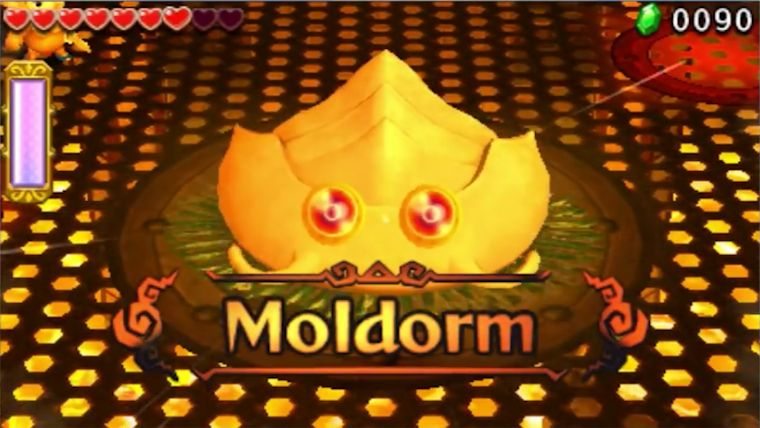 The Legend of Zelda: Tri Force Heroes offers an array of different stages across eight different worlds, with mini-bosses and main bosses spread between them. Some are completely new type bosses, while others are newer versions of ones we know.

One of latter is that of Moldorm, which you should remember from pretty much every top down Zelda game just about. Moldorm is the giant worm type beast that chases you and requires you to attack the end of its tail to kill. That is pretty much the case here, but with a twist.

Moldorm here is certainly going to be much easier in multiplayer, as you are won’t have to switch back and forth, which requires precise timing, so we’ll explain how to do this with hints especially for single player.

The fight starts upon having all three Links in the arena below. At this point, you will learn how he reacts. Moldorm will lock onto one Link and start following it for a little bit. You can tell which one he’s after by the color beams his eyes are shooting out. If you are on single player, you will also want to switch before he hits you. If you do this he freezes for a second and turns around. This doesn’t allow you an opportunity to attack though, as he pulls his whole body in.

Instead, you will want to basically pick any of the two Links and have them on opposite sides of the arena just about. After he hits one of them, make sure he goes for the other and then as he turns around and his tail forms again, switch to the other and attack it once with the sword before he hits the other Link and pulls it in.

After three hits, he will move the tail up higher, you will have to double up with two of the Links. Basically, the third Link will be a decoy as you switch back and forth and then hit the tail with the double up Links. He will continue to speed up during this process, so be careful.

After a few more hits, he will move the tail even higher up and move insanely fast. This time, just use the third Link to pick up the other two and slash the spot on the tail one more time to kill him. And with that, you will have not only beaten the Fire Temple, but the Volcano section of the game as a whole.