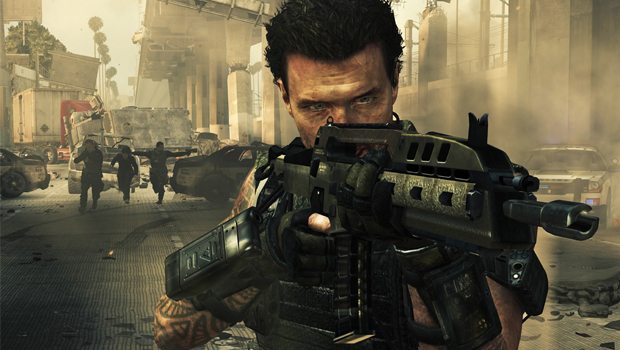 While we weren’t impressed with the initial reveal of Black Ops II at Microsoft’s press conference, we awaited anxiously to get backstage at Activision’s E3 booth to get a sneak peak at the anticipated upcoming title. We held out hope that we’d be getting the opportunity to go hands-on with the game, but watching someone playing it is just as good (not really, but we unfortunately didn’t have a choice in the matter).

The first demo the media are seeing behind closed doors is the same one you watched during Microsoft’s press conference. So “in the interest of time,” we’ll jump ahead to an area which was cut during the game’s E3 premiere.

Following the sequence in which you take up a position as a sniper on the cracked highway and provide wall-piercing cover to your comrades on the ground, the highway gets hit by a rocket and you fall to the street below where an intense firefight is ensuing. You quickly get into an armored car, taking heavy fire while you speed off. A low-flying jet  zooms past you as it scrapes the narrow concrete struggling to provide structure for the rest of the highway. Suddenly, the jet takes out the highway with a rocket, causing the driver to swerve into a sharp right turn.

The car then emerges into the war-torn streets of L.A. Black Ops II may be running on an old engine, but we’d be lying if we said the scale and detail that’s been put into creating a destroyed, wreckage-filled downtown Los Angeles wasn’t worthy of praise. It is. You’ll see L.A. landmarks erupting with fiery explosions and thick, black smoke engulfing entire areas as a truly massive-looking battle takes place both in the air and on the ground.

When you exit the car and join the fighting on the ground, we got our first look at the CLAW – a four-legged mech capable of suppressing you with heavy weaponry. As the CLAW rips through nearby L.A.P.D. officers, you’re tasked with taking out the three deployed CLAWs with a nearby rocket launcher. The demoer made quick work of the first and then turned into a nearby hotel lobby where you’ll engage in a smaller firefight with enemy ground forces. As soon as you make it back to the street, a semi blocks the path in front of you and deploys another wave of opposing ground troops.

The demoer continued the firefight in a nearby building where the enemy had taken up a fortified position. Here, we saw the first glimpse at a new laser-targeting system that allows the player to send attack drones to any position in sight. After all, it is the year 2025, and Treyarch wouldn’t be doing their jobs if they didn’t implement some form of futuristic weaponry. The demo ended shortly after moving outside, but not before a plummeting jet crashes nearby, following the collapsing of a skyscraper in the distance that sends a mass of dusty debris toward your position.

At the conclusion of the demo, Activision showed us a first-hand look at the game’s new and most innovative feature: “Strike Force missions.” Black Ops II will be the first game in the Call of Duty franchise to feature branching storylines. Strike Force missions will present the player with a mission that will affect the mission and story itself depending on your success. In essence, what you do during these missions will have a direct effect on the outcome of the Cold War and the end of the campaign.

Strike Force missions aren’t just your run-of-the mill, ground-based combat missions that you’ll find throughout the game. These particular sequences allow you to control a number of war assets including drones and mechs, and even jet fighters. The demo began in what looked to be some sort of cargo base. The demoer immediately showcased “Overwatch Mode” which jumps to a thermal overhead view of the battle and allows you to move player-control between specific units. The missions require you to take three different and distinct objectives, although you have a limited time and only a small amount of counted units (your number of active units and what assets you have to work with are shown at the bottom of the screen) to work with.

The demoer showed us the different ways to approach various objectives and how strategic use of your assets will be a major factor that determines your success. One of the objectives was to take control of a nuclear missile, heavily protected by enemy ground forces and heavy armored mechs. The player fired his rifle from cover and tossed a couple of well placed grenades to flush out enemy troops. He then switched to an aerial drone that took down the bad guys sprinting toward other cover. When most of the pesky ground forces had been eliminated, the mech still remained. The demoer strategically placed his troops in positions that would draw the attention and fire from the mech, then switched to one of his own mechs still in play. Using this formula, he was able to easily take down the distracted heavy and secure the objective for his side.

We haven’t seen a whole lot from Black Ops II as of yet, but our behind-the-scenes look at the Strike Force missions provides us with a glimmer of hope that Activision and Treyarch are still capable of putting out a product that is not simply an utter re-hashing of a predecessor. What we’d like to hear more about in the near future is the evolution of the game’s ever-popular “Zombies” mode and how it will be received with its own branch of campaign and especially its own multiplayer component.