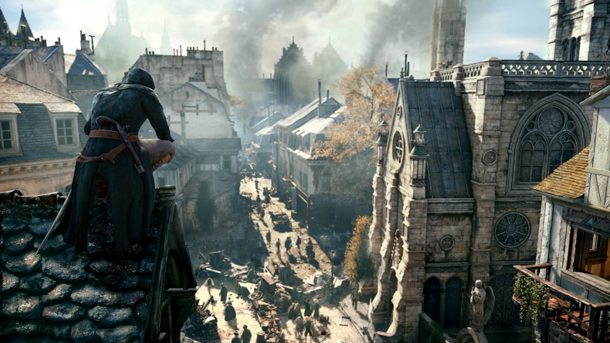 The latest issue of Game Informer has a huge feature about Assassin’s Creed Unity. An interesting new part of the game is that it will include boss fights.

Boss battles have been added to Assassin’s Creed Unity to “amp up the tension”. Game designer Alex Pedneault said that boss fights “are challenging” and that they can “pull off the same moves that Arno can”. He also said they wanted to add boss fights simply because the series never had them. He promised boss fights won’t be frustratingly hard, but not too easy either.

Also new to Assassin’s Creed Unity is the addition of long ranged weapons such as “spears, pikes, and staves”. This will allow gamers to attack from afar with more power and precision than ever before. Guns are also available to Arno, but they alert guards easily and ammo is not abundant. It’s also being noted Arno only has “one single hidden blade”.

Co-op mode is a huge part in Assassin’s Creed Unity as shown at E3 2014. The article mentions you can revive fallen teammates. You only have a short amount of time to revive them so you have to be quick. If your partner dies before revival, their wallets will “take a hit” before they get respawned.

The game releases October 28th for the PC, PS4 and Xbox One.