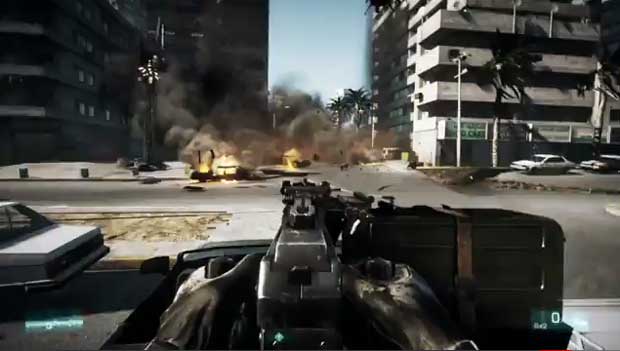 Remember that Fault Line trailer for Battlefield 3 where an earth quake shakes the ground so hard that an entire building falls over right in front of the player?  It was definitely an epic moment in the trailer, and will likely be just as epic when we get to play it in the single player campaign.  Recently, DICE has revealed that this type of destruction isn’t just available in the single player experience, but the Frostbite 2 Engine could handle this in Battlefield 3 multiplayer also.

From what we’ve seen so far, the Frostbite 2 Engine in action is powerful stuff.  Though the developer admits in a recent interview that they are still learning how to use the technology that can be applied to so many areas of the game.  While the application of this new power will certainly increase the intensity of the single player campaign, the possibility of this type of destruction in multiplayer is mind boggling.

“It’s technically possible to have earthquakes in multi-player using Frostbite 2. We feel like kids walking into sweet shops with Frostbite – it has so many features we never knew we needed, and we’re still figuring out how best to use them.”  “We’re still looking into ambient destruction in multiplayer; it’s still too early to say really” a developer for DICE told PSM3 Magazine.

So while it’s possible to have a dynamic siesmic shifting landscape in multiplayer for Battlefield 3, I wouldn’t bet on it. It’s hard to imagine a game with that sort of dynamic working on the scale that Battlefield 3 will play on, on either console or PC.  In fact, DICE feels the same way, but it’s not because it isn’t possible.

“It’s just the start for this engine. So far, the only limit to the things we can do with it are our own creative restraints.”